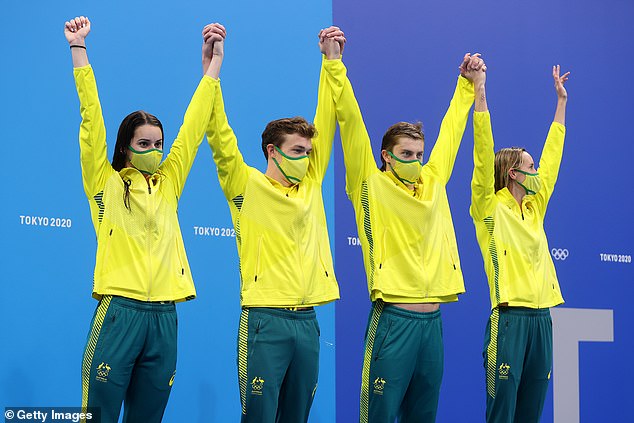 Besides the international admiration and being acknowledged as the best in their sport, Olympic athletes can take home some hefty bonuses for winning medals.

As well as becoming heroes for young aspiring athletes by finishing on the podium, our sporting heroes are rewarded with cash.

These rewards are only available for an athlete’s highest position, with only a single incentive payment being issued to athletes.

But our Aussie athletes’ rewards are dwarfed by the sums other countries offer their winning competitors.

Singaporean Table Tennis player, Yu Mengyu (pictured) missed out on $250,000 after losing her bronze medal match in the Women’s Singles

Medallists from the Philippines also get huge sums, and weightlifter Hidilyn Diaz took home 40 million pesos for her win in Tokyo – about A$1.08million.

She was the country’s first gold medallist in almost a century, winning the women’s 55kg category.

Officials and businesses also flooded the athlete with gifts including a condo and a vacation house, as well as a new car for her win which will cement her status as a national hero.

They are also rewarded for each medal, not just for their highest performance.