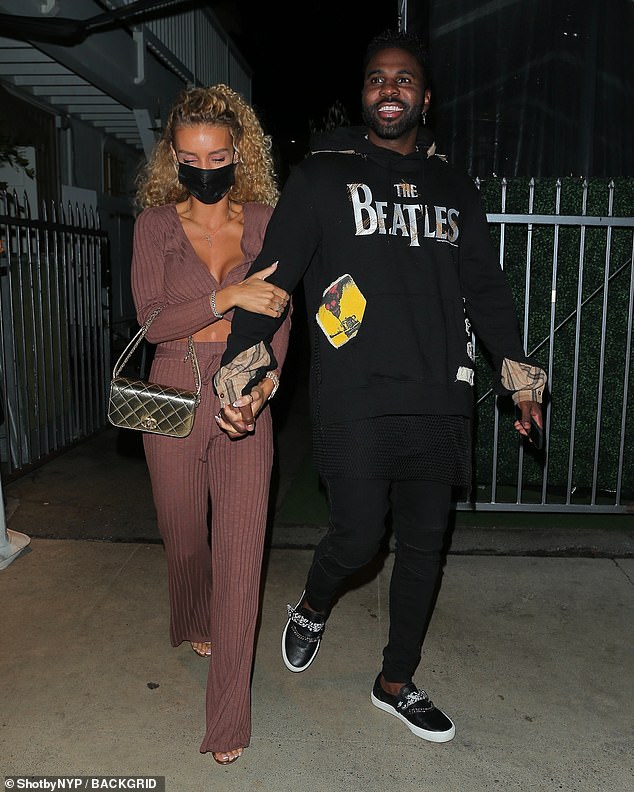 
Jason Derulo has split from his girlfriend Jena Frumes, just days after putting on a romantic display for his birthday, and five months after welcoming their first child together.

The 32-year-old singer – who celebrated his birthday on Tuesday with Jena and their son – announced the news via his Twitter account on Thursday.

Jena, 28, had wished Jason a happy birthday in a gushing post yesterday – saying she would ‘love him forever’ and just two nights ago, the former couple were pictured all smiles and holding hands in LA.

‘Jena and I have decided to part ways,’ Jason tweeted. ‘She is an amazing mother but we feel being apart at this time will allow us to be the best versions of ourselves and the best parents we could be. Pls respect our privacy in this time.’

Was it something she said? Jason DeRulo SPLITS from girlfriend Jena Frumes just days after romantic night out for his birthday (pictured above in LA on Tuesday)

Breaking the news: Despite looking smitten days earlier, Jason revealed on Thursday they have called it quits

For her gushing birthday post on Wednesday, Jena wrote on Instagram: ‘Happy birthday @jasonderulo ! Blessed to share the same day of birth with my lover. You are the most handsome, hardworking, talented, silly, loving human ever.’

She went on: ‘You truly make me whole and I’m so grateful for the love we share. You and our mini make me the happiest girl in the world and I can’t wait to make more memories with you guys. I know I’m a tough cookie but you make me soft and accept me for who I am and I’m forever grateful for that. Cheers to another year! I love you so much, forever.’

Jason revealed he and Jena had welcomed their first child together in May this year.

Jena also confirmed that she gave birth to Jason on May 8, 2021 in a slideshow capturing his first few days of life.

‘A glimpse of my first week with our healthy handsome little king,’ Jena captioned the post. ‘Life now has so much more meaning & I am so grateful. I’m so so so in love with this little boy he’s everything I never knew I needed. 05/08/2021. I love you forever @jasonderulo.’

The slideshow included a photo of her holding the child not long after giving birth to him. The couple announced Jena’s pregnancy less than two months ago on his Instagram account, where he posted video of himself kissing her growing bump.