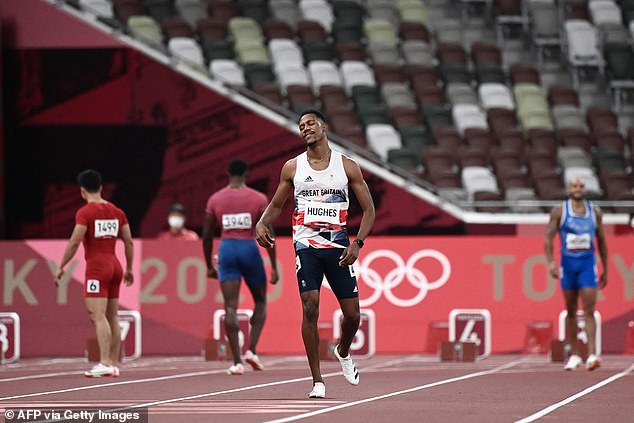 Zharnel Hughes is DISQUALIFIED from the men’s 100m final at Tokyo Olympics for a false start as Italy’s Lamont Jacobs secures shock gold medal in 9.8s ahead of Fred Kerley and Andre De Grasse

By Dan Ripley for MailOnline

The Texas-born sprinter clocked 9.80 seconds in Tokyo on Sunday to finish ahead of the USA’s Fred Kerley and Canada’s Andre De Grasse.

Jacobs became the first man to win the 100m other than Usain Bolt since Justin Gatlin in 2004. 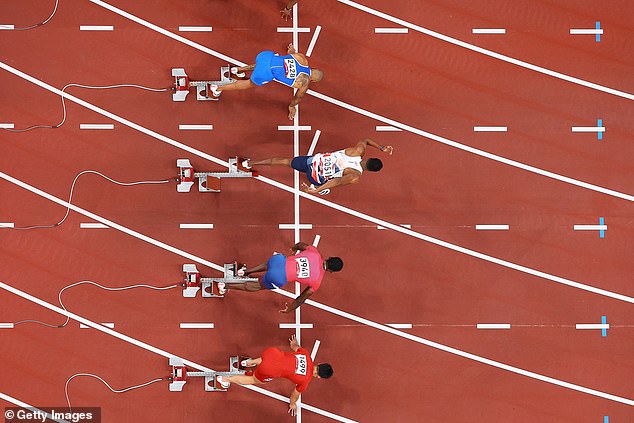 Team GB’s Zharnel Hughes, the first Briton in a men’s 100m final in 21 years, was disqualified for a massive false start and was forced to watch from the sidelines.

A devastated Hughes told BBC after the race: ‘My left calf cramped up on me. I felt if I was in the final I would have won a medal – no doubt about it.

‘Unfortunately my calf cramped – I can’t describe it.’

Yohan Blake missed out on the final and, with no Bolt, there were no Jamaicans in the last eight for the first time since Sydney 2000.

The 31-year-old, the joint second fastest man in the world, then insisted it would be his last Games.

‘It’s definitely my last Olympics. You know track is not easy. I won’t be ungrateful. I’ve gained a lot,’ he said.

Hughes stormed to win his semi-final in 9.98s, the first time he had run sub-10 seconds this year.

After Daryll Neita reached the women’s final on Saturday it was the first time in 37 years – the Los Angeles Games – Team GB had athletes reach both finals.

Reece Prescod was disqualified from the first semi-final for a false start while CJ Ujah finished fifth in 10.11s to bow out.

‘To be honest it’s just my fault, I’m not going to shy away from it, not going to blame anything, or make an excuse for it,’ said Prescod.

‘I’m a professional athlete. I shouldn’t have false started – I was amped up, I was really, really amped up.

‘Mentally I think even I didn’t realise there was a lot going on thinking on yesterday’s race. It happens, but it’s the Olympics but obviously now I’ve got to stay mentally strong, and focus on if I can bring my chance, my efforts to the relay – that’s going to be fun.’ 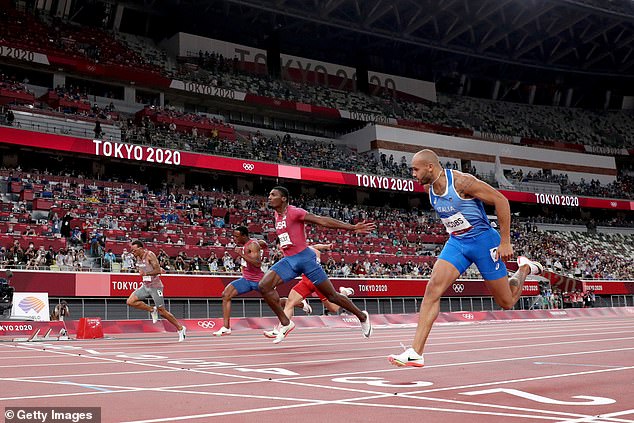 Team GB will be chasing their first 100m gold medal since the Barcelona Games of 1992 when Zharnel Hughes lines up in lane four ahead of the final.

Hughes reached the final after impressively winning his semi-final, defeating this year’s fastest man in Trayvon Bromell in the process.

With the field missing Bromell, the retired Olympic champion in Usain Bolt and the world champion in Christian Coleman, it is set to be the most open men’s 100m final in a generation.

Follow Sportsmail’s DAN RIPLEY for live coverage of the men’s 100m final at the Tokyo Olympics, including build-up, the race itself and reaction.