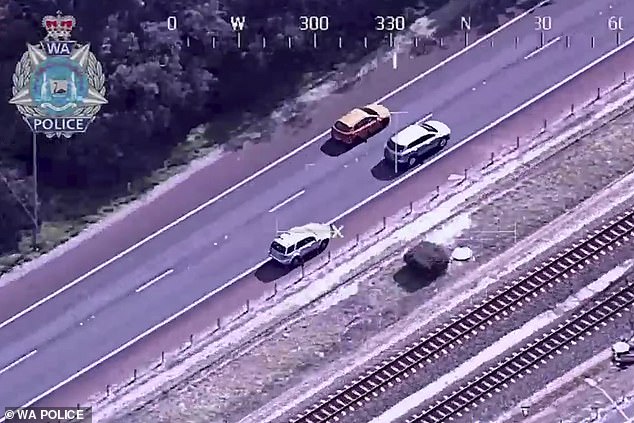 Shocked onlookers witnessed the moment a man was arrested and slapped with over two dozen offences after leading police on a high-speed chase.

The 32-year-old man from North Freemantle began speeding away from police at 11:30am on Tuesday in Anketell, Perth, after officers tried to stop a car they believe was stolen from a home in O’Connor on Monday.

It is alleged that the driver, who was on bail at the time, failed to stop and sped away, leading police on a chase though the suburbs of Mandurah, Armadale and Cannington.

Witnesses reported seeing the vehicle, a Ford Escape, driving erratically and on the wrong side of the road, narrowly missing oncoming traffic.

West Australian police released a statement on Wednesday night stating that the man got out of the car and tried to steal an unoccupied vehicle in Pirara Waters. But after failing, he sped off again in the original car.

The car stopped on the top level of a parking lot in Westfield Carousel Shopping centre where the man made a run for it. By 12.15pm there were more than a dozen police cars and a police helicopter called to help with the pursuit.

Police finally caught the man in the shopping centre and arrested him.

Witnesses describe seeing a large number of officers pursuing the man through the centre at around 12:30pm.

‘All of a sudden this big bloke comes barreling down the steps’, one concerned shopper, Neil Reynolds told 7 News.

‘Within a few minutes we had about 20 policemen.’

Detectives from the regional investigations unit charged the man with 26 offences on Tuesday night including eight counts of no authority to drive, three of failing to stop, three of reckless driving to escape pursuit by police and two of possessing stolen property.

WA Police Commissioner Chris Dawson told 6PR on Wednesday morning it was ‘unsurprising’ to him that the man had been on bail at the time of the alleged crime spree, saying it was frustratingly common how often people breached bail.

‘We will be objecting to any further bail condition,’ he said.

The man has also been charged with a series of offences alleged to have happened in June and earlier this month.

These include counts of criminal damage by fire, burglary, possessing a prohibited drug and attempted aggravated robbery.