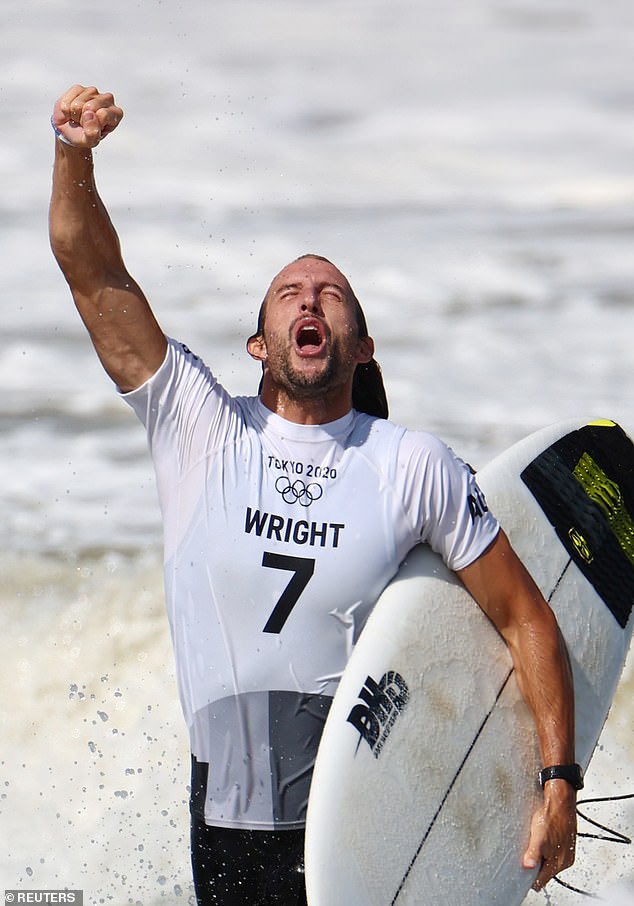 He beat Medina in a nail-biting 11.97 to 11.77 victory on Tuesday to complete an extraordinary comeback from an injury that threatened not just his career but his life.

He suffered bleeding on the brain as a result of the wipeout on a monster 15-foot wave, leading to memory loss and required full time care.

‘I went through some tough times but it was the Olympics inclusion of surfing that spurred me to get back to my best,’ a ecstatic Wright told Channel Seven afterwards.

‘The Olympics to me has been like that beacon of light, it really has.

‘I was going through some really tough times. I had some long lasting symptoms. I questioned whether or not I would do the sport again.’

His gratitude at getting a second chance was there for all to see on Tuesday as he yelled in delight as he came out of the water and rushed to celebrate with his Australian teammates.

Wright joined the Irukandji – as the Australian surfing team is named after the venomous jelly fish – in the middle of a victory circle, where he faked ‘stinging’ his teammates and they dropped to the sand as he roared in triumph.

‘Mate, I feel like I’m walking on a cloud. I couldn’t be any prouder,’ Wright said.

‘My heart was beating SO hard! The conditions were crazy. I just stayed focused.’

Wright had a message for others who had gone same the same trauma he had.

‘On a really personal level … all the people who have had really bad brain injuries – it’s all possible. Don’t give up. Keep striving to get back there.’

Wright’s wife Kita and their two children Vali and Rumi proudly watched from back home in Australia on the NSW far north coast.

They could only be joined by several friends due to the current coronavirus restrictions in NSW.

‘It was so beautiful to watch him win that against Gabby, a really good mate,’ Kita said.

‘We’re so thrilled for Owen and for Australia and to add that bronze medal to his trophy room.’

‘I just can’t believe my husband’s an Olympian, let alone the first Australian surfer to ever win a medal at the Olympics.

Wright hasn’t seen his young family in two-and-a half months and will remain separated for another several months.

Young Vali was asked if he had a message for his dad following the bronze medal win.

‘I want an ice cream,’ he replied.

Wright, 31, had a nail-biting duel in messy surf with Medina, the two-time Brazilian world champion and Olympic gold medal favourite.

The Australian had priority at the end of the clash and stuck to Medina like an irukandji to deny the Brazilian any late scoring opportunity, winning 11.97 to 11.77.

‘I got my waves and then I just (wrapped) him up in the tentacles, which is what we’ve been using all week, the irukandji tentacles … I didn’t let him breathe,’ Wright said.

‘My heart was beating so hard.’

Earlier, fellow Australian Sally Fitzgibbons was distraught after a shock quarter-final loss to Japan’s Amuro Tsuzuki put her out of medal contention.

‘This hurts so bad, this one (is) the toughest loss of my career,’  the Australian told Channel Seven.

‘My heart is just shattered.’

The men’s and women’s finals were moved forward by one day because of the conditions generated by tropical storm Nepartak.

Surfing is making its debut as an Olympic sport in Tokyo, and is likely to provide Australia with many medal opportunities at future Games.