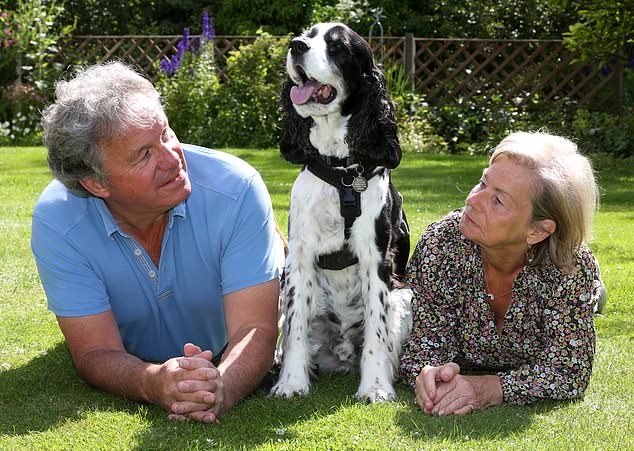 Paul Davidson thought little of it when he casually mentioned to his pet insurer that his address had changed.

The 64-year-old had insured his beloved ten-year-old springer spaniel, William, with John Lewis since he was a pup and was paying £195 a month for cover.

So he was staggered to discover that moving from Tavistock, Devon, to Cirencester, Gloucestershire, meant his monthly bill would soar by an eyewatering £500.

Indeed, Paul’s story is typical of the nonsensical postcode lottery plaguing pet owners across the country.

Insurers claim a multitude of factors are to blame for premiums routinely varying by hundreds of pounds depending on where you live.

When Paul queried how his change in address could make such an enormous difference to his insurance risk, a John Lewis employee told him that certain areas had higher incidents of dognapping, which meant premiums were higher.

This is an increasingly common excuse trotted out by insurers after an alarming rise in dog thefts during the pandemic.

With more people at home during lockdown, there was a boom in demand for dogs, with an estimated 2.2 million people adopting dogs between March and ­September of last year.

Yet analysis by Money Mail shows that the likelihood of having your dog stolen has barely any impact on the cost of pet insurance.

Take Paul’s case, for example. His old address was in Devon — a place with far more dognappings than his new address in Gloucestershire.

According to figures from comparison site GoCompare, there were 222 incidents of dognapping in Devon and Cornwall reported to the police between 2018 and 2020. In the same time period, there were only 42 cases reported in Gloucester.

More curiously, GoCompare’s research showed that West Yorkshire had the highest incidents of dognapping, with 430 cases reported to the police between 2018 and 2020.

By comparison, the least likely place to have your dog stolen was in Surrey, where only 26 cases were reported in two years.

Despite this, the average annual pet insurance for a dog in West Yorkshire is £445, while in Surrey it is much higher, at £540 (premiums rise steeply as dogs age and face health problems). In fact, pet insurance in Surrey cost more than all of the top five dognapping hotspots, which include: Kent, Devon and Cornwall, Northumbria and West Mercia.

Paul says: ‘The woman on the phone said the premium rise was probably because dog thefts are higher in Cirencester, but I don’t see that being true.

‘Ultimately, we can’t afford to pay the extra costs. They basically told me I would have to pay £700 per month, which is a fee I think most people would struggle to afford.’

James Daley, of campaigning body Fairer Finance, says there is little justification for such variation in insurance costs across the country.

He says: ‘It’s absolutely exploitative that somebody could be quoted an extra £500 per month just to change addresses.

‘Often when insurers don’t want to continue having a customer on their books they will find all sorts of excuses to change the premiums.

‘[Paul] would need to get his dog stolen several times a month to make that jump worthwhile.

‘What’s more, most insurers have a cap on how much they will pay out anyway.’

The Association of British ­Insurers (ABI) says insurers processed £799million in claims to cover veterinary treatments in 2020 — the equivalent of £2.2million per day. But what is pushing up premiums faster in some counties? Experts say vet bills are largely to blame as surgeries in certain areas provide more expensive services as standard, while even bills for basic treatments can vary widely.

For example, Parkvets, which has eight practices across south-east London and north-west Kent, charges £55 for an initial consultation.

Yet Inshes Veterinary Centre in Inverness, Scotland, advertises initial consultations at £38. The Ark Veterinary Practice in Stratford-upon-Avon charges between £145 to neuter a dog between 10kg and 20kg.

But at Midland ­Veterinary Surgery in Leyton, East London, it’s around £100 more, with prices varying between £225 and £356 depending on the dog’s weight.

Hannah Isitt, head of pet insurance at GoCompare, says: ‘There are a wide range of factors that sit behind a pet insurance premium which determine the premium paid by customers. So while dognapping is increasing in some areas, it does not appear that premiums have increased in areas where reported thefts are on the rise.

‘This is why it’s so important to get prices from as many insurers as you can when you’re looking for pet insurance cover.’

John Lewis has now agreed to keep Paul’s premium at £192 per month — though this could rise when he renews the insurance in December.

A spokesman says the customer service agent who spoke to him made an error.

She says: ‘We take many factors into account when calculating insurance premiums and Mr Davidson shouldn’t have been given the impression that pet theft was the main reason for the price increase. We have reviewed his circumstances and, while an increase to his premium was due, it was nowhere near £500 a month. We apologise for this error.’