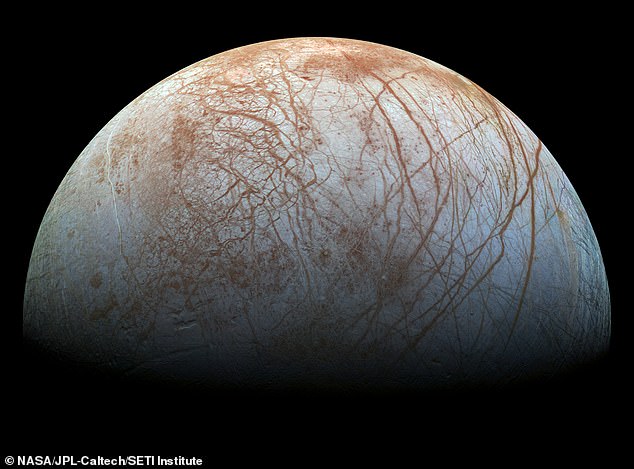 SpaceX will provide ‘launch services’ for the Europa Clipper mission, which is due to blast off in October 2024 to study Europa through a series of fly-bys, NASA said.

The spacecraft will launch on a Falcon Heavy rocket owned by Musk’s company from NASA’s Kennedy Space Center in Florida, the space agency added.

The mission aims to find out if the natural satellite hosts conditions suitable for life using ‘a sophisticated suite of science instruments’.

Europa, an icy moon with a hidden subsurface ocean, has a diameter of 1,940 miles (3,100 kilometers) – about 90 per cent the diameter of Earth’s moon.

There is evidence of recent geological formations within the 15 mile thick frozen crust, including small, dark and dome-like features about a mile below the surface

Europa is 90 per cent the size of Earth’s moon.

It orbits Jupiter at a distance of about 484 million miles (778 million kilometers).

It completes one orbit of Jupiter every 3.5 Earth days.

But its subsurface ocean might contain more than twice as much water as Earth.

The moon has a very thin oxygen atmosphere – too thin for humans to breathe.

Key mission objectives are producing high-resolution images of Europa’s surface, determine its composition and look for signs of recent or ongoing geological activity.

The mission will also measure the thickness of the moon’s icy shell, search for subsurface lakes and determine the depth and salinity of Europa’s ocean.

Europa is one of few locations in the Solar System with liquid water, along with Earth and Saturn’s moon Enceladus, making it a target of interest for NASA.

Scientists have also found evidence that beneath the ice crust is an ocean of liquid water or slushy ice.

According to NASA, Europa’s subsurface ocean might contain more than twice as much water as Earth.

Last year, Monica Grady, Chancellor at Liverpool Hope University, said it’s ‘almost a racing certain’ that Europa is home to alien life, which she thinks is ‘similar to the intelligence of an octopus’.

A 3D model of Europa Clipper

NASA will aim to find out if she’s correct with the launch of Europa Clipper, which will ‘send a highly capable, radiation-tolerant spacecraft into a long, looping orbit around Jupiter to perform repeated close flybys of the icy moon’.

NASA did not reveal whether other companies had bid on the Europa Clipper launch contract, which marks NASA’s latest vote of confidence in Musk’s firm.

SpaceX has already carried several cargo payloads and astronauts to the International Space Station (ISS) for the space agency in recent years.

In April, SpaceX was awarded a $2.9 billion contract to build the lunar lander spacecraft for the planned Artemis program that would carry NASA astronauts back to the moon for the first time since 1972.

In May 2020, SpaceX successfully transported NASA astronauts Robert Behnken and Douglas Hurley on a 19-hour journey to the ISS – marking the first crewed test flight of the firm’s Crew Dragon spacecraft.

In the process it became be the first crewed launch from the US into orbit since NASA’s space shuttle program ended in 2011.

WHAT DO WE KNOW ABOUT EUROPA AND WHY IS IT SO SPECIAL?

Europa orbits Jupiter every 3.5 days and is tidally locked – just like Earth’s Moon – so that the same side of Europa faces Jupiter at all times.

It is thought to have an iron core, a rocky mantle and a surface ocean of salty water, like Earth.

Unlike on Earth, however, this ocean is deep enough to cover the whole surface of Europa, and being far from the sun, the ocean surface is globally frozen over.

Many experts believe the hidden ocean surrounding Europa, warmed by powerful tidal forces caused by Jupiter’s gravity, may have conditions favourable for life.

Nasa scientists are on the verge of exploring Jupiter’s ocean moon Europa for signs of alien life.

Europa is our best shot of finding biological life in the solar system, researchers say.

The space agency is priming two probes, including one that will land on its surface, to explore the distant moon in detail within the next decade, the agency says.