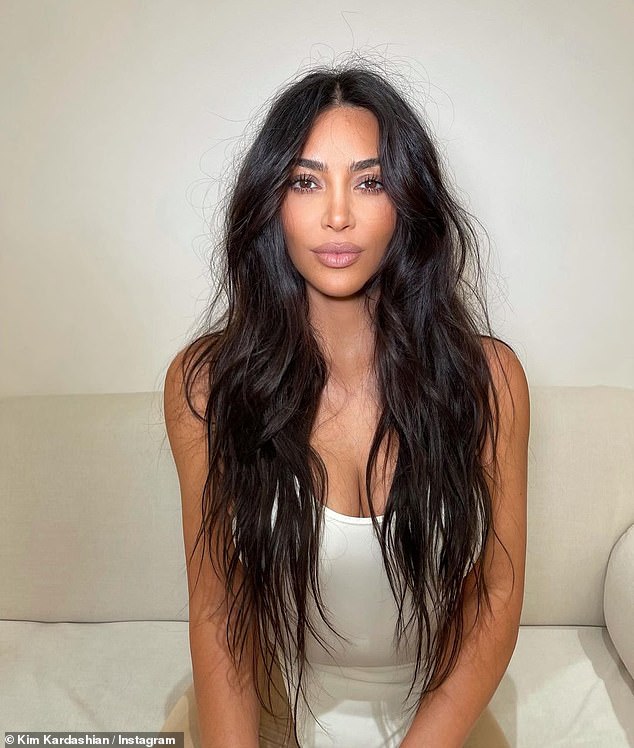 By Sam Joseph Semon For Dailymail.com

She is known for showing off her impressive sense of style as a top social media influencer.

And on Saturday, Kim Kardashian was ever the chic reality television figure as she shared a duo of sizzling snaps that featured her relaxing in a stocked dressing room.

The 40-year-old cosmetics queen made a point of telling her fans that she was having a ‘Casual Glam Day’ in the caption.

No frills: Kim Kardashian exuded ‘casual glam’ in a duo of sizzling snaps that were shared to her Instagram account on Saturday

She changed locations for another snap, as she sat comfortably on a couch in her massive closet.

Her luscious brunette locks spilled onto her chest and backside in both of the snaps.

Taking it easy: She changed locations for another snap, as she sat comfortably on a couch in her massive closet

Earlier in the day, Kardashian was featured in a promotional shot that was shared to the official Instagram account of her clothing company, SKIMS.

The supermodel wore a nearly see-through light blue top in the eye-catching photo.

She paired her shirt with a matching pair of pants, and the color of her clothing was beautifully contrasted by her dyed blonde hair.

The entertainment industry powerhouse added a little bit of shine to her outfit with a set of gold bracelets.

Kardashian originally launched Skims in the summer of 2019, and the company initially operated under the name Kimono.

Following backlash regarding claims of cultural appropriation, the entrepreneur changed the brand’s moniker to its now-present one.

The company focuses on producing basic shapewear and comfortable clothing in a myriad of colors for women.

The reality television personality herself is often featured in the line’s promotional materials.

Going strong: Kardashian initially launched her shapewear company in 2019 with the intention of creating equally stylish and comfortable women’s clothing

In hot water: The influencer was met with accusations of cultural appropriation for the company’s original name, Kimono, before she changed it completely

Kardashian spoke about the origins of the brand during an interview with Harper’s Bazaar, where she noted that many of her colleagues did not understand her vision for the line.

‘When I said I wanted seamless shapewear, everyone looked and thought that I was crazy,’ she recalled.

The influencer went on to note that her personal sense of style is heavily reflected in Skims’ offerings and expressed that she was interested in creating clothing that looked and felt good.

She remarked: ‘I’m all about comfort and glamour at the same time. I always think you can do it all, so why not have everything that you need as far as your products?’

Having it both ways: During an interview with Harper’s Bazaar, Kardashian pointed out that she was ‘all about comfort and glamour at the same time’