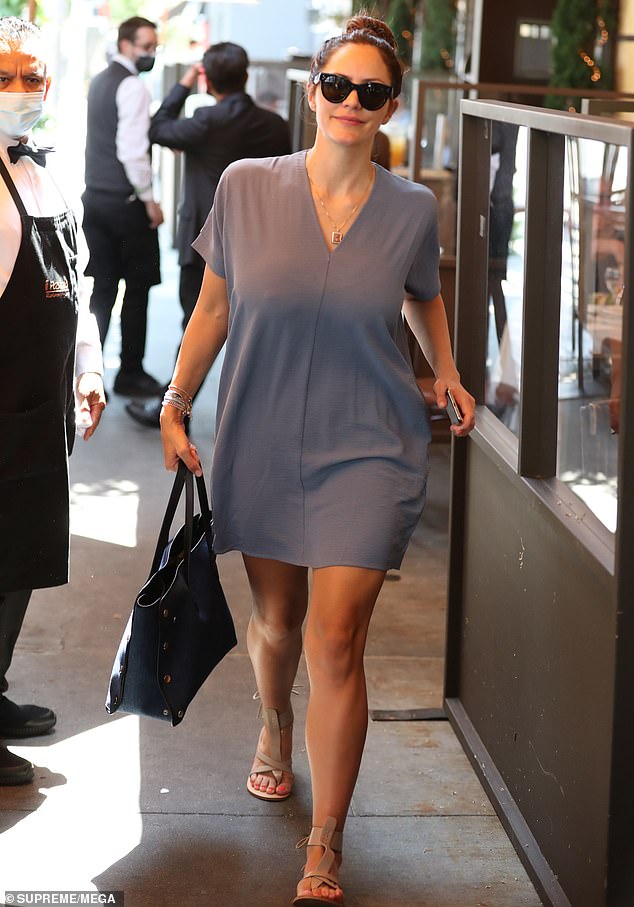 Katharine McPhee and her husband David Foster appeared to be ever the happy couple while out in Beverly Hills on Friday.

The actress, 37, and the music executive, 71, were seen sharing a meal with developer and real estate mogul Mohamed Hadid, 72, at celeb-friendly restaurant Il Pastaio.

The outing comes nearly five-months after Katharine and David welcomed their first child together, a baby boy named Rennie David.

Stepping out: Katharine McPhee was seen enjoying lunch with her husband, David Foster, and developer Mohamed Hadid at Il Pastaio in Beverly Hills on Friday

McPhee wore a flowing light blue dress that covered up much of her form while spending time at the eatery.

The Shark Night actress also wore a stylish pair of flats that contrasted well with the brighter shade of her outfit.

The American Idol runner-up wore a chic set of sunglasses and carried a large bag with her for the duration of the outing.

Her typically free-flowing blonde hair remained tied back in a tight bun as she enjoyed her husband’s company.

Toned-down affair: The record executive sported a light blue button-up shirt and dark jeans while spending time with his wife and friend

Stylish ensemble: The real estate mogul donned a denim jacket and a near-matching pair of jeans that were offset by a stark white shirt

Foster kept it relatively casual during the outing, as he sported a button-up shirt that paired well with a pair of dark jeans.

The Grammy-winning producer sported an eye-catching pair of round sunglasses at the eatery.

Hadid opted for a denim jacket worn above a similarly colored pair of jeans as he spent time with the happy couple.

The father of models Bella, Gigi and Anwar contrasted the predominant shade of his outfit with a white t-shirt.

Comfy attire: The actress sported a light blue dress that covered much of her frame during the excursion to the eatery

Savoring the moment: At one point, McPhee was seen smiling while posing for what appeared to be a photo

At one point, McPhee was seen smiling while taking what appeared to be a selfie.

The actress and her husband hit it off after their first meeting, and they were often spotted with each other at various locations.

Before she became involved with her current spouse, the actress was married to Nick Cokas, with whom she tied the knot in 2008.

The chart-topping singer attracted controversy in 2013 when she was pictured kissing her Smash director Michael Morris, and she filed for a divorce from her husband the following year.

Former flame: Prior to becoming involved with her now-husband, the actress was married to Nick Cokas from 2008 until 2016

Long history: Foster was married to several individuals and fathered five children before he met his current wife

She went on to start a relationship with her Smash co-star Elyes Gabriel, although they broke things off after two years.

His second marriage to Rebecca Dyer lasted for just four years, although they welcomed daughters Sara, Erin and Jordan.

The producer went on to marry Linda Thompson in 1991 and served as a stepfather to her sons Brody and Brandon, whom she shared with Caitlyn Jenner, and they went on to dissolve their union in 2005.

Past connection: Foster was previously married to Mohamed’s former wife Yolanda, although they finalized their divorce in 2017

Foster’s fourth marriage was to Mohamed’s ex-wife Yolanda, and the two made things official between them in 2011.

The two announced that they had separated in 2015 and eventually finalized their divorce two years later.

McPhee and Foster confirmed that they were engaged in 2018 and tied the knot during a ceremony that was held in London the following year.

The pair have been enjoying their newfound status as parents over the last few months while raising Rennie.

Happy parents: McPhee and Foster tied the knot in 2019 and welcomed a son named Rennie earlier this year