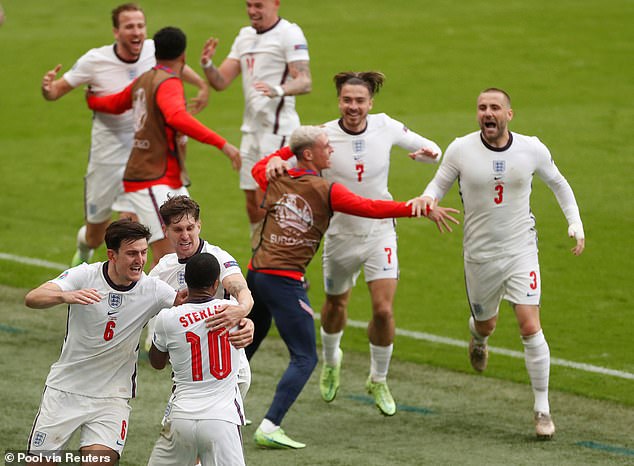 England stars could make up to £200,000 each in bonuses from their lucrative boot and kit deals if they end nation’s 55 years of hurt and win Euro 2020 this summer

By Sami Mokbel for the Daily Mail


England players are in line for lucrative bonuses from their boot deal contracts if they end the country’s 55 year wait for a trophy.

Gareth Southgate’s men are just three victories away from winning the European Championships, starting with Saturday’s crunch quarter-final against Ukraine in Rome.

England haven’t won a major tournament since lifting the World Cup in 1966 – with the glory of ending the country’s long wait for silverware unquestionably the biggest motivation for the squad as they enter the defining week of the Euros.

After beating Germany 2-0 on Tuesday, England are just three wins away from winning it

However, the players will also have a financial incentive to lift the trophy at Wembley on Sunday week.

Sportsmail understands that a number of players have significant individual cash bonuses, ranging between £100,000-£200,000, linked to winning an international trophy with their respective boot and kit deals.

The bonuses are part of many players’ boot and kit deals and could net them up to £200,000

The amount they actually earn is subject to a range of variables including appearances and goals.

Away from their existing commercial deals, England players are sure to earn huge amounts from new off-the-field contracts if they can make themselves national heroes and win the tournament.