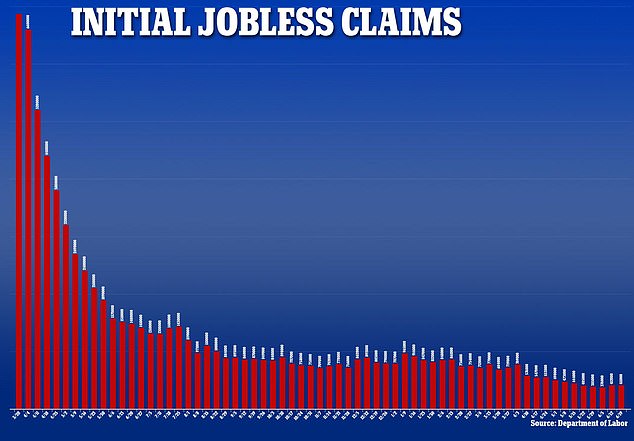 The number of Americans applying for unemployment benefits dropped last week, a sign that layoffs declined and the job market is slowly improving.

The Labor Department said Thursday that jobless claims declined just 7,000 from the previous week to 411,000 for the week ending June 19, with 3.4 million Americans collecting continuing benefits.

The number of weekly applications for unemployment aid has fallen steadily this year from about 900,000 in January, but remains well above the pre-pandemic average of around 200,000.

There are a record 9.8 million job openings across the country, but desperate employers are struggling to to attract workers. 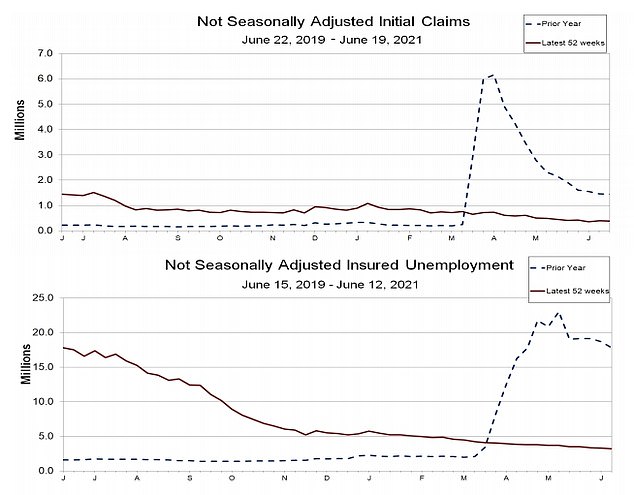 Generous government-funded unemployment benefits, including a $300 weekly federal bonus, have been blamed, as well as a hesitancy to return to work out of fear of contracting the virus.

A shortage of childcare facilities is also keeping some parents, mostly women, outside the labor force. Pandemic-related retirements and transitions into new careers are also factors.

Four states, including Iowa and Alaska, either terminated all federal government-funded benefits or just the $300 supplement on June 12.

They were joined last Saturday by eight other states, including Alabama and West Virginia.

Thirteen other states with Republican governors, including Texas and Florida, will end these benefits for residents between June 26 and July 10.

Louisiana is ending the weekly supplementary check on July 31, the only state with a Democratic governor to terminate federal benefits. For the rest of the country, the federal benefits will lapse on September 6. 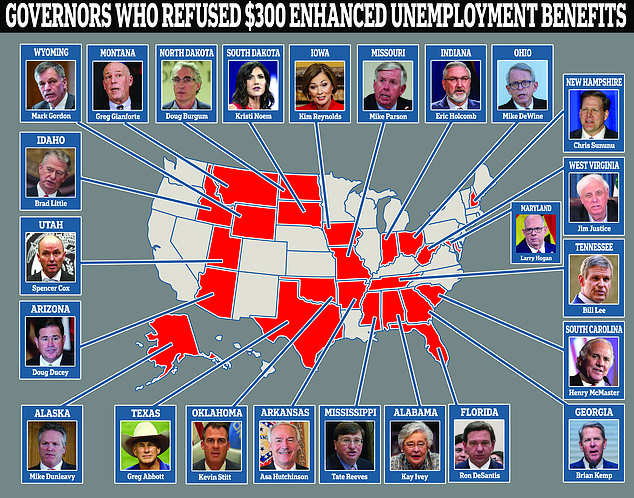 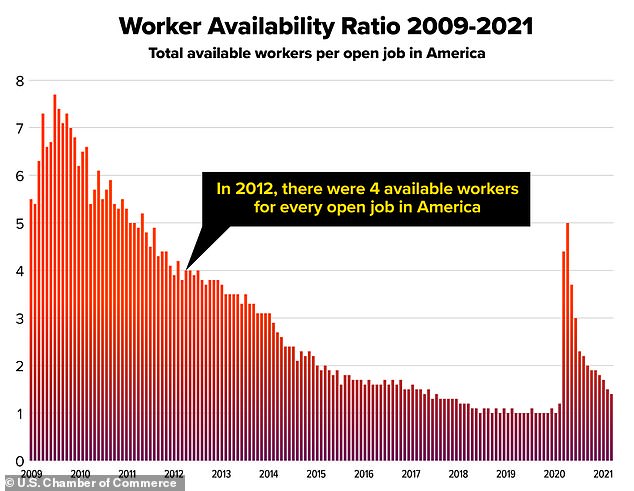 Economists at Bank of America have estimated that those who earned less than $32,000 a year at their previous jobs can receive more in jobless aid with the extra $300.

At the same time, the federal expansions of unemployment benefits have made it possible for millions of self-employed and contract workers who were previously not eligible for help to receive aid for the first time.

The end of benefits in the 12 states has not led to a surge in job searches, according to data from Indeed Hiring Lab.

‘The share of national job search activity in these states, measured by clicks on job postings, is below the late April baseline,’ said Jed Kolko, chief economist at the Indeed Hiring Lab.

‘If overly generous federal unemployment insurance benefits were holding back job seekers, then we would expect search activity to increase, relative to the national trend, in states where those benefits have ended.’ 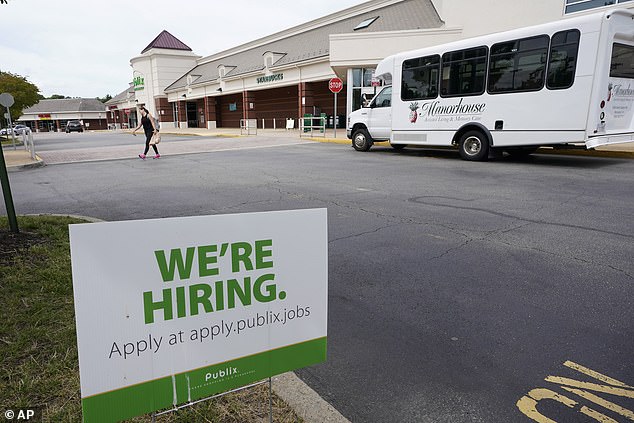 A We’re Hiring sign at a Publix supermarket in Richmond, Virginia earlier this month. The number of Americans applying for unemployment benefits declined last week

Federal Reserve Chair Jerome Powell told lawmakers on Tuesday that he believed the economy would see strong job creation in the fall.

In addition to the brightening public health situation, trillions of dollars in pandemic relief from the government are also underpinning the economy.

As the pandemic fades, states and cities are lifting more business restrictions – California just fully reopened June 15 – and the economy is picking up as consumers are traveling, eating out more, and visiting movie theaters and amusement parks.

A separate report from the Commerce Department on Thursday confirmed economic growth accelerated in the first quarter, thanks to the massive fiscal stimulus.

Gross domestic product increased at a 6.4 percent annualized rate last quarter, the government said in its third estimate of growth for the first three months of the year. That was unrevised from the estimate published last month. The economy grew at a 4.3 percent rate in the fourth quarter.

Growth could top 10 percent at an annual rate in the April-June quarter, according to the Federal Reserve Bank of Atlanta.