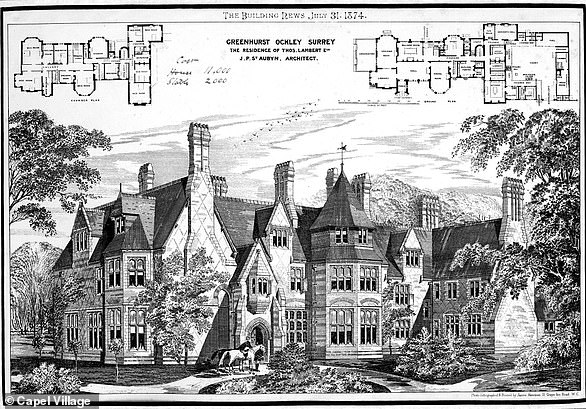 The early history of Grenehurst can be traced, through manorial records, from 1282 until 1815, according to the Capel Village website.

It suggests that the early history of Grenehurst can be traced, through manorial records, from 1282 until 1815.

Grenehurst Park: The house and gardens were owned briefly by Sir Richard Branson

In 1622, the property was owned by John Young of Warnham, but by 1649 it had passed to William Prideaux.

In the eighteenth century, the property had several occupants before 1759 when Nicholas Branch became the owner. He was Constable of Capel.

Land Tax records show that by 1780 William Frankland was the owner.

By around 1800, ownership had passed to John Gorham, a wealthy London merchant who owned several properties in the City of London and elsewhere.

It is believed that he left the house to his niece Rebecca Bliss. And in her will, she left the lands in Ockley and Capel to her cousin Ebenezer Maitland, a director of the Bank of England.

In 1873, the Cazalet family, who had been living in Brighton, bought the Grenehurst estate from Thomas Lambert.

In 1914, he was made groom-in-waiting to George V and in 1920 became his sailing master. He was generally recognised as one of the 20th century’s greatest sailors.

In the lead up to the twenty-first century, Grenehurst had several other owners, including Cecil Philip Adcoc and Emmanuel Elias Hadjilias. The Elim Bible College also owned the estate for a number of years.

After their departure, the house and gardens were owned briefly by Sir Richard Branson.

The present estate was created in the early 1990s by Cala plc. The mansion house was divided into 17 flats, while the stables and outbuildings were converted into 11 cottages.

Twelve new houses were built in the grounds and leisure facilities include an underground swimming pool and gym in the vaulted cellars.