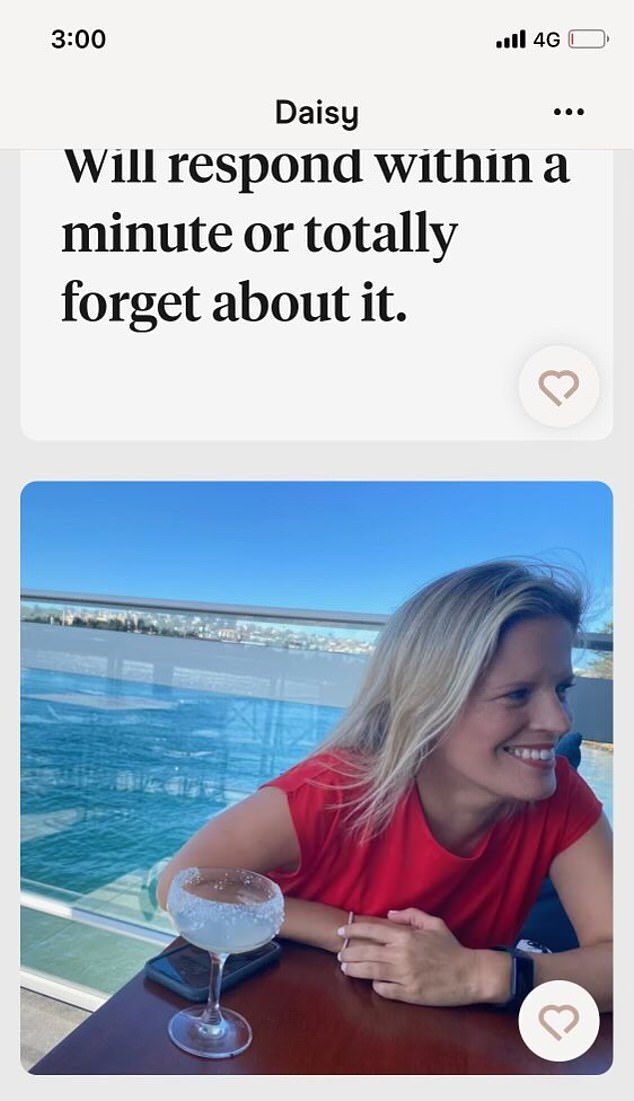 The daughter of an ex-Prime Minister has apparently been spotted on a dating app – and her profile prompt suggests she could be an intimidating option for potential suitors.

Daisy Turnbull’s Hinge profile title is the very direct, ‘Will respond within a minute or totally forget about it.’

Daisy Turnbull, who recently split from her husband of 10 years, appears to be using the upmarket dating app Hinge, and kicked it off with an intimidating prompt for potential suitors

Ms Turnbull tagged her second photo with the prompt ‘Lowkey flex’, which is likely to be a joke about subtly bragging

Part of Hinge’s marketing says the app is ‘designed to be deleted’, matching its reputation as an app users use to find relationships instead of casual hookups.

She added another confident prompt to her profile: ‘Lowkey flex’, a phrase usually associated with twentysomethings, which means to subtly brag.

Ms Turnbull’s no-nonsense prompt could also be a reflection of how busy she is.

Ms Turnbull is also teacher and director of wellbeing at the exclusive St Catherine’s School at Waverley, and a Lifeline counsellor.

She also published her first book in 2021, 50 Risks to Take With Your Kids, and has already talked about writing a guide to consent for teenagers.

Ms Turnbull, who is co-parenting with her ex-husband James Brown, recently published a book about encouraging children to take risks

Daisy Turnbull (second from right) appears to be on the dating app Hinge after splitting from her husband James Brown (far right). She is pictured with her parents Malcolm and Lucy Turnbull

Ms Turnbull, whose father was Prime Minister from 2015 to 2018 and a longtime politician before that, modelled raising her kids on her own childhood.

She and her older brother Alex were largely given the freedom to explore and make their own mistakes. They relished in the autonomy it gave them.

‘I grew up in the ’80s which was riskier in a good way,’ Ms Turnbull told The Courier Mail.

‘There weren’t so many concerns around kids walking down the street or bike riding around the block. On a holiday at Northern Beaches one year – I was about 11 or 12 – and I caught the bus with a friend from Palm Beach to Avalon to see a movie. Dad told us, “if you hit Wynyard you’ve gone too far, turn around and come back”.’

Ms Turnbull thinks the way she was raised offered a perfect balance of exploration and safety and often asks her mother, who is known as Gaga to her children (while Malcolm is referred to as Baba) for advice.

‘As a kid, I remember feeling really excited by the responsibility we were given and that we were trusted by our parents,’ she said.

Ms Turnbull said she wanted her own children to develop a sense of judgement and responsibility that only comes with being given the freedom to make mistakes.

Following a discussion about the differences between parenting in the 1980s and parenting now, Ms Turnbull wrote a book about encouraging children to take risks.

The self-help book details 50 risks – separated into categories of physical, social and character risks – that parents should allow their children to take.

She told The Sydney Morning Herald she has been approached to do so.