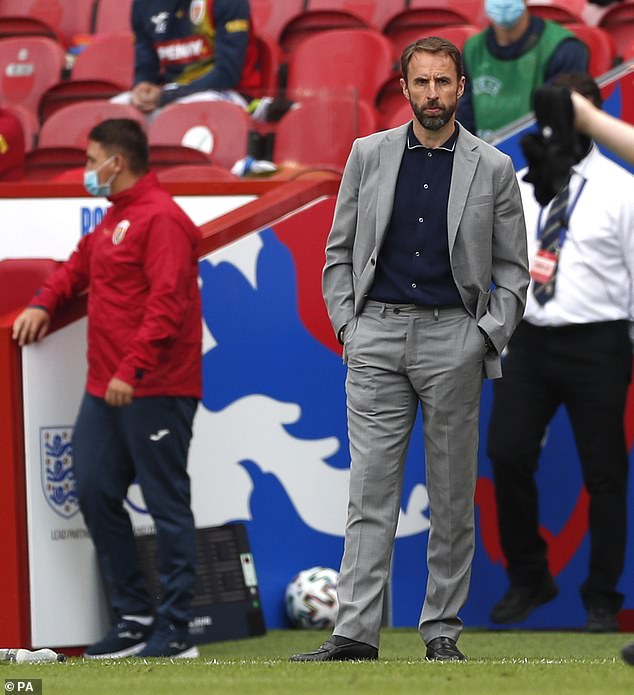 ‘Gareth Southgate effect’ take two? England manager has hung up his ‘lucky’ waistcoat but casual suit and £109 fine-knit polo shirt from his own range could see a similar sales boom, says stylist

By Jo Tweedy For Mailonline


The last time Gareth Southgate appeared on the touchline of a major football tournament, sales of waistcoats at M&S rocketed by 35 per cent.

As the England manager prepares to step once more into the international football fray though – this time at the Euros, which start on Friday – the ‘lucky’ navy waistcoat that sparked a sartorial storm at the 2018 World Cup won’t play a part.

He told BBC Radio 4 Today’s programme last month: ‘It was a lovely moment to have that connection with the public. I haven’t worn a waistcoat on its own since… I don’t think I’ll be wearing a waistcoat this summer.’

Southgate, who turned 50 last year, has already debuted the whistle-and-flute that he’s likely to wear in the dugout for the team’s first match against Croatia on Sunday afternoon – a more casual lightweight grey suit teamed with a comfy-looking fine-knit navy polo shirt.

Touchline chic: Going for sartorial glory once again: Sales of waistcoats at M&S rocketed by 35 per cent after the World Cup in 2018 but Southgate told the Today programme on Radio 4 last month that the ‘lucky’ waistcoat won’t make a re-appearance

Bye-bye waistcoat…the navy garment sparked a sales boom in 2018 at the World Cup but has been hung back up in the England manager’s wardrobe. His new look is a light grey suit teamed with a £109 Pablo Cuban Knit polo shirt in navy from Percival, for which Southgate, 50, is a brand ambassador

The former Aston Villa midfielder might be well aware of his powers of influence, given that the £109 Pablo Cuban Knit polo shirt – with white piping on the collar – comes from the brand Percival, for which he’s an ambassador.

The semi-final against Croatia that year became known as waistcoat Wednesday, with fans watching the match at home donning their own waistcoats to echo Gareth’s look.

Fashion stylist Gemma Sheppard gave his latest managerial outfit a big thumbs’ up, saying: ‘Without a doubt, this new look is a considered fashion choice. A knitted polo shirt mixed with traditional suiting is a new spin on smart casual.

‘If the good weather continues, knitted t-shirts and polo shirts are here as a trend for the summer. They’re already stocked in the likes of Reiss, Zara, M&S and River Island to name a few.’

The stylist said the look works ‘because the fine knit t-shirt dresses down formal suiting but keeps a formality that’s essential for Gareth’s high profile job status and creates the perfect hybrid between suiting and relaxed daywear.’

Early signs suggest that the new look might not yet have won fans over, with one dubbing the expensive polo shirt a ‘pyjama’ top

Sheppard adds: ‘It’s also a good representation of how desktop dressing post the pandemic has made people stop and think about their return-to-work wardrobes. Gareth’s look is bound to influence this transition into more relaxed work wear. There’s no stopping this style icon!’

However, early signs suggest that the new look might not yet have completely won fans over.

After the friendly with Austria last week, one Twitter user wrote: ‘Not enjoying Gareth Southgate’s shiny suit and polo shirt combo. Bring back the waistcoat, perhaps a skinny knit definitely a tie’.

Another added: ‘Weak collar. Not a good look’ while a fellow football fan chimed in: ‘Who dressed Gareth Southgate? Is he wearing a polo shirt, a shirt or pyjamas under that cheap suit?’

This week, the England manager said players have a duty to ‘raise awareness and educate’ both on and off the field, amid the ongoing row over footballers taking the knee.

In an open letter penned to Three Lions fans ahead of Euro 2020, the England boss said he has ‘never believed’ sports stars ‘should just stick to football’ and insisted his team ‘are role models’.

Writing after a section of England fans booed stars for taking the knee in Sunday’s friendly against Romania, he said it was a ‘duty’ for stars to ‘interact with the public on matters such as equality and racial injustice’.

And he urged that supporters ‘must recognise the impact’ England stars ‘can have on society’.