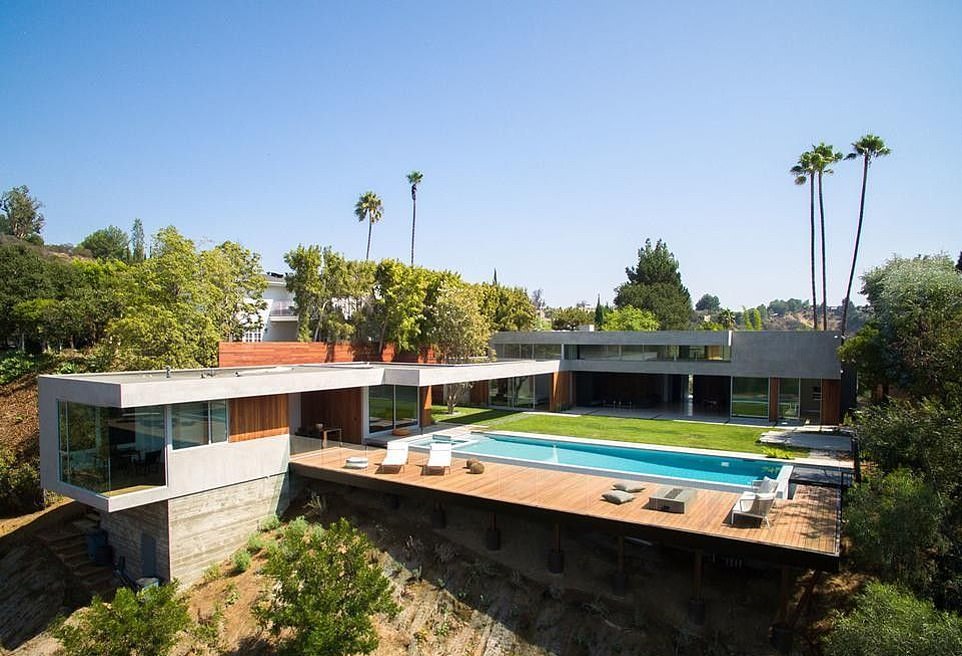 After publicly withdrawing from the French Open on Monday to focus on her mental health, tennis star Naomi Osaka is spending some time relaxing at the $7 million Beverly Hills home she bought from Nick Jonas.

The sports icon retreated to the 41,000-square foot property after dropping out of the Open amid backlash when she declared that she would not do interviews with the media.

The huge home sits atop a half-acre lot on top of a mountain in the Beverly Hills Post Office section of Los Angeles and boasts three bedrooms and four bathrooms with elevated ceilings and large windows to allow for an ample amount of sunlight to shine through.

A chefs’ kitchen featuring state-of-the-art Miele appliances has a built-in espresso machine and a wine refrigerator, and the master bathroom has a freestanding Agape Spoon tub.

The property also includes a freestanding guesthouse and terrace, which surrounds an infinity pool to create a private courtyard.

Naomi Osaka’s more than 41,000-square-foot home sits on a half-acre property on top of a mountain

The house is filled with large windows, offering ample light and great views from every room

Huge windows give Osaka incredible views of the surrounding area

It was first built in 1965, according to the New York Post, but was completely rebuilt in 2015 by Los Angeles nightclub owner Jason Lev, who worked with architectural firm SPACE International and the design team from Ground Up LA to design the minimalist structure inspired by midcentury design.

Osaka, 23, bought the property from singer Nick Jonas in an off-market deal in 2019, is now living there with her boyfriend of two years, rapper Cordae Amari Dunston.

The tennis star divides her time between LA and Florida, where she bases herself in Boca Raton.

The property provides spectacular views across Los Angeles from a massive wooden deck, cantilevered over the valley below.

The living room has a built-in book shelf with a flat screen TV for Osaka and her boyfriend, Cordae Amari Dunston, to relax

Osaka rose to international fame for beating tennis star Serena Williams in the 2018 U.S. Open, and later went on to win the Australian Open, making her the first woman to win consecutive Grand Slam title since Williams in 2015.

Last year, Osaka — who was born in Japan but raised in New York — earned nearly $38 million from prize money and endorsements, making her the highest paid female athlete in history, according to Forbes. She now ranks No. 29 on the 100 highest-paid athletes, while Williams is No. 33.

But Osaka made international headlines for a different reason last week, when she announced she would not speak to the media at the French Open, citing mental health reasons.

‘I’ve often felt that people have no regard for athletes’ mental health, and this rings true whenever I see a press conference or partake in one,’ she wrote on Twitter on May 26. ‘We’re often sat there and asked questions that we’ve been asked multiple times before or asked questions that bring doubt in our minds, and I’m just not going to subject myself to people that doubt me.’

‘I’ve watched many clips of athletes breaking down after a loss in the press room, and I know you have as well,’ she continued. ‘I believe that whole situation is kicking a person while they’re down, and I don’t understand the reasoning behind it.’

‘If organizations think that they can just keep saying “Do press or you’re gonna be fined,” and continue to ignore the mental health of their athletes that are the centerpiece of the cooperation then I just gotta laugh.’

There are three bedrooms in the home, each featuring large beds

An office provides Osaka and Dunston a place to work

It is surrounded by views of the great outdoors, overlooking the foliage of the mountain

She was fined $15,000 for refusing to participate in a mandatory news conference following her first-round victory over Patricia Maria Tig on Sunday, with officials from the Grand Slam — which includes the U.S. Open, the Australian Open, the French Open and Wimbledon — saying in a statement that they reminded Osaka of the consequences of not following the rules of the tournament as set in the 2021 rulebook after she made her announcement.

‘We want to underline that rules are in place to ensure all players are treated exactly the same, no matter their stature, beliefs or achievement,’ the statement read.

‘As a sport, there is nothing more important than ensuring no player has an unfair advantage over another, which unfortunately is the case in this situation, if one player refuses to dedicate time to participate in media commitments while the others all honor their commitments.’

Osaka is living there with her boyfriend of two years, rapper Cordae Amari Dunston

There are four bathrooms in the Beverley Hills mansion

She rose to international fame in 2018 after beating Serena Williams in the U.S. Open, and was fined over the weekend for refusing to take part in a mandatory press conference after her victory against Patricia Maria Tig on Sunday (pictured)

The next day, Osaka took to Instagram to announce she was withdrawing from the tournament.

‘This isn’t a situation I ever imagined or intended when I posted a few days ago,’ she wrote. ‘I think now the best thin for the tournament, the other players and my well-being is that I withdraw so that everyone can get back to focusing on the tennis going on in Paris.’

‘I never wanted to be a distractions and I accept that my timing was not ideal and message could have been clearer. The truth is that I have suffered long bouts of depression since the U.S. Open in 2018 and I have had a really hard time coping with that.’

‘Anyone that knows me knows I’m introverted, and anyone that has seen me at tournaments will notice that I’m often wearing headphones as that helps dull my social anxiety.’

‘Though the tennis press has always been kind to me (and I wanna apologize especially to all the cool journalists who I may have hurt) I am not a natural public speaker and get huge waves of anxiety before I speak to the world’s media.’

‘Here in Paris I was already feeling vulnerable and anxious so I thought it was better to exercise self-care and skip the press conferences. I wrote privately to the tournament apologizing and saying that I would be more than happy to speak with them after the tournament as the Slams are intense.’

‘I’m gonna take some time away from the court now, but when the time is right, I really want to work with the Tour to discuss ways we can make things better for the players, press and fans.’

Grand Slam officials later issued a statement recognizing that mental health is ‘a very challenging issue,’ and vowing to make changes to its organization to take into account the players’ mental health.

‘We wish to offer Naomi Osaka our support and any assistance in any way possible as she takes time away from the court,’ the statement reads. ‘She is an exceptional athlete and we look forward to her return as soon as she deems appropriate. ‘

It continues: ‘Mental health is a very challenging issue, which deserves our utmost attention. It is both complex and personal, as what affects one individual does not necessarily affect another. We commend Naomi for sharing in her own words the pressures and anxieties she is feeling and we empathize with the unique pressures tennis players may face.’

‘While players’ well-being has always been a priority to the Grand Slams, our intention, together with the WTA, the ATP and the ITF, is to advance mental health and well-being through further actions.

‘Together as a community we will continue to improve the player experience at our tournaments, including as it relates to media. Change should come through the lens of maintaining a fair playing field, regardless of ranking or status. Sport requires rules and regulations to ensure that no player has an unfair advantage over another.

‘We intend to work alongside the players, the tours, the media and the broader tennis community to create meaningful improvements.’