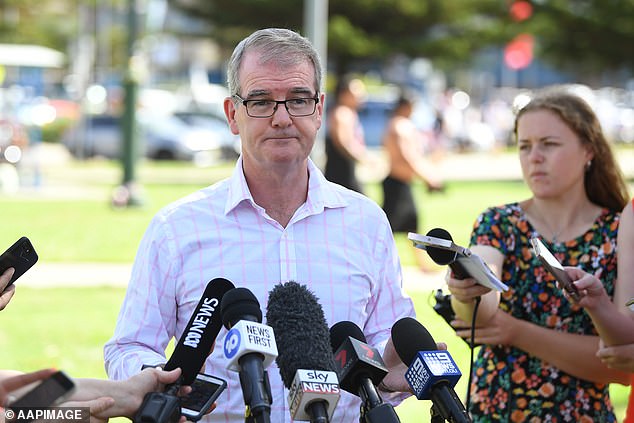 Mr Daley took over from Luke Foley as Labor leader in late 2018 and led the party to its 2019 state election defeat – making two decisive gaffes in the final week of campaigning – before moving to the back bench.

However he told reporters on Sunday that he’d look to regain the Labor leadership following the resignation of Jodi McKay on Friday.

After staring down threats to the party leadership for six days, Ms McKay abruptly fell on her sword on Friday, leaving the top job vacant.

Mr Daley has since expressed his view that Ms McKay was unfairly treated and should never have been ‘forced out’ of the leadership. He also said Labor members must have a say in the next NSW leader.

He said the winner of any Labor leadership ballot must help the party ‘bury the hatchet’ over Ms McKay’s departure, and focus minds on the 2023 poll.

‘(Members) own the party, not the apparatchiks,’ Mr Daley said.

‘Please help me heal our party and win government in 2023.’

Ms McKay on Friday said she was not asked to resign, but made it clear she was quitting under duress and accused others of internal ‘destabilisation’.

Privately and publicly, allies say she was white-anted as opposition leader.

‘If a ballot was held today I can tell you I would win,’ Ms McKay told reporters.

The leadership ambitions of former shadow transport minister and Ms McKay’s rival in the 2019 ballot, Chris Minns, are no secret.

Mr Minns is yet to formally put himself forward for the leadership but if he does so, it will trigger a new leadership contest with Mr Daley.

Since 2013, Labor party rules require that the caucus and the rank-and-file members vote to elect a leader if more than one person contends.

That would likely leave the party in turmoil for weeks, and without a leader when the Berejiklian government hands down its budget in late June.

Mr Daley said he had not spoken with Labor head office over the leadership.

The relevance of last week’s Upper Hunter by-election defeat was greatly overstated, he said, and he backed Labor to sort its issues out.

Labor’s Upper Hunter first-preference vote dipped from 29 to 21 per cent.

Mr Daley was elected to parliament in 2005 as the MP for Maroubra and served on the NSW front bench before Labor’s 2011 election defeat.

Mr Daley with wife Christina concedes defeat of the 2019 NSW Election at the NSW Labor Election reception at the Sofitel Sydney Wentworth, in Sydney, on 23 March 2019

In the final week of the 2019 election campaign he was caught on tape accusing Asian migrants of taking local jobs, and also stumbled over key Labor education policy numbers in a live television debate.

‘Our young children will flee and who are they being replaced with? They are being replaced by young people from typically Asia with PhDs,’ he said at the time.

‘So there’s a transformation happening in Sydney now where our kids are moving out and foreigners are moving in and taking their jobs.’

Mr Daley said he’d long ruminated on his failures and was keen to make amends.

‘We all make mistakes… I paid a price for mine (and) I’ve thought about them more than you can imagine,’ Mr Daley, a lawyer by trade, said.

‘I had four months in the job and I want another opportunity to get it right.

‘I intend to heal the party if I’m the leader (and) look after, as I’ve always done, the ordinary people in NSW who’ve been forgotten.’

Adam Searle, who leads the opposition in the upper house, is acting leader.