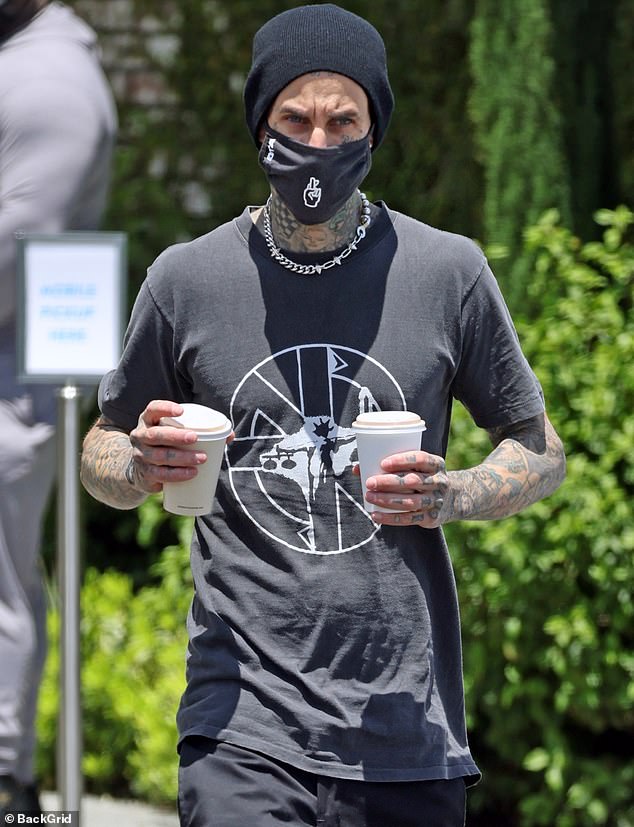 Travis Barker picks up coffee for two in Los Angeles… after Kim Kardashian calls hookup rumors about the pair a ‘FALSE narrative!’

By Sameer Suri For Dailymail.com


Travis Barker modeled a glittering necklace when he was spotted stepping out in sunny Los Angeles this week.

The 45-year-old who shot to fame as the drummer for Blink-182 was seen carrying two disposable coffee cups.

He draped his enviably svelte figure in a T-shirt and skinny black jeans, adding a splash of dazzle with a necklace.

Out and about: Travis Barker modeled a glittering necklace when he was spotted stepping out in sunny Los Angeles this week

Travis’ latest outing comes amid his sizzling romance with Kourtney Kardashian which has been going on for months now.

His ex-wife Shanna Moakler has recently been claiming that while they were still married Travis had an affair with Kourtney’s sister Kim.

Kim denied the rumors this week writing online: ‘NO! False narrative! We’ve been friends for years and I’m so happy for him and Kourt’

In his 2015 memoirs Travis maintained that he and Kim were never involved – though he confessed being attracted to her.

On the move: The 45-year-old who shot to fame as the drummer for Blink-182 was seen carrying two disposable coffee cups

During a recent TMZ interview alongside her beau Matt Rondeau, 28, Shanna accused the Kardashians of ‘destroying my family twice.’

She was referring in part to the fact that she is ‘alienated’ from her children with Travis – Alabama, 15, and Landon, 17.

‘We just had dinner with our kids and all their friends three weeks ago. So, you know, this has all started since my ex started dating a certain person,’ said Shanna.

Alabama has accused Shanna of being an absent mother and recently claimed to have ‘gone seven months without seeing my mom and her not calling me once.’

On the move: He draped his enviably svelte figure in a T-shirt and skinny black jeans, adding a splash of dazzle with a necklace

That broadside was not the first time Alabama publicly slammed her mother on social media, and she has also taken aim at Matt.

‘Matthew is nothing but awful to her. Not only that, but he cheats on her. My mom has never completely been in my life. Can you guys stop painting her out to be an amazing mom?’ Alabama alleged.

The teenager continued: ‘Did your moms ask to see you on Mother’s Day cause mine didn’t? I’m done keeping it a secret, reality shows.’

Making it happen: Early in their relationship Travis had Kourtney’s name inked onto his chest and then later he allowed her to tattoo: ‘I love you,’ on one of his arms

‘Co-parenting is hard, but I have always and will continue to prioritize my children’s happiness and well-being,’ Shanna responded in a People statement.

She pointed to a ‘vindictive parenting competition’ and said the ‘claims of being absent from my children’s lives are false and incredibly hurtful.’

Shanna, who has appeared on Hollywood Exes, said: ‘I know one day my children will see through the fame and money machine they have been thrust into and realize their mother loves and will always be there for them.’

Erasing the past: As the romance went on he posted an Instagram snap of Kourtney sitting with him as he had his ink of Shanna’s name covered up with a skull

Meanwhile Matthew has insisted to Life & Style that he has ‘never’ been unfaithful and said: ‘She’s an amazing mother, and I am with her because she loves and cares so much about her family. That’s just one of the reasons why I love her so much.’

During an Instagram Q&A Shanna was asked why her children spend more time at Travis’ home than at hers.

‘Because he lives behind two gates, has a mega mansion and is cooler than me,’ she dished. ‘LOL, we have shared custody but our kids are older. We are very close.’