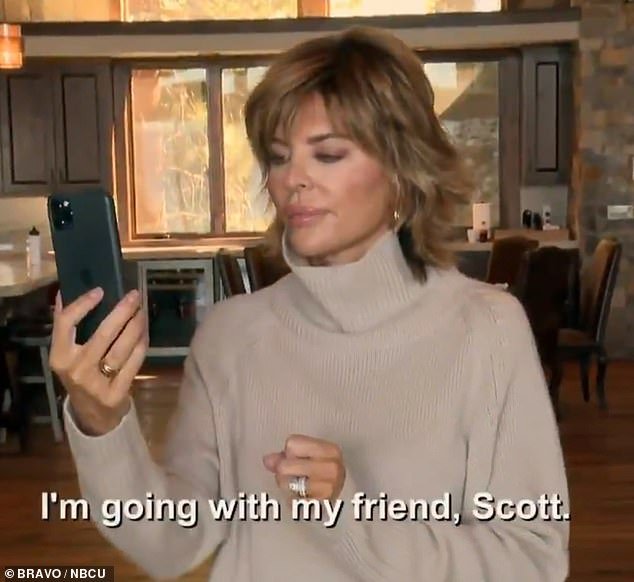 It’s a romance with a questionable 18-year age-gap that has a lot of folk talking.

But now Lisa Rinna is having say, as she finally addresses her daughter Amelia Hamlin, 19, dating the much-older Scott Disick, 37, in the next season of Real Housewives of Beverly Hills.

In a teaser for season 11, Lisa, 57, is seen taking a FaceTime call from her daughter Amelia who tells her she is spending time with her ‘friend’ Scott – who has three children – Mason, 11, Reign, 6, and Penelope, 8, – with his estranged partner Kourtney Kardashian, 41.

‘He’s too damn old… and he’s got three kids!’ bellows Kyle Richards, as mother Lisa shouts back in agreement: ‘I know!’

Lisa has been largely silent on the topic of her daughter Amelia dating Scott, only referencing the romance in jest on her social media.

Last week, the reality star joked about the fact they were both seen out recently wearing bucket hats. ‘Welp we both seem to share a love of bucket hats,’ Lisa wrote alongside the pic of her and Scott.

Say what now? Lisa Rinna, 57, is seen taking a FaceTime call from daughter Amelia, 19, who tells her she’s going on a date with Scott Disick, 37, who she calls her ‘friend’