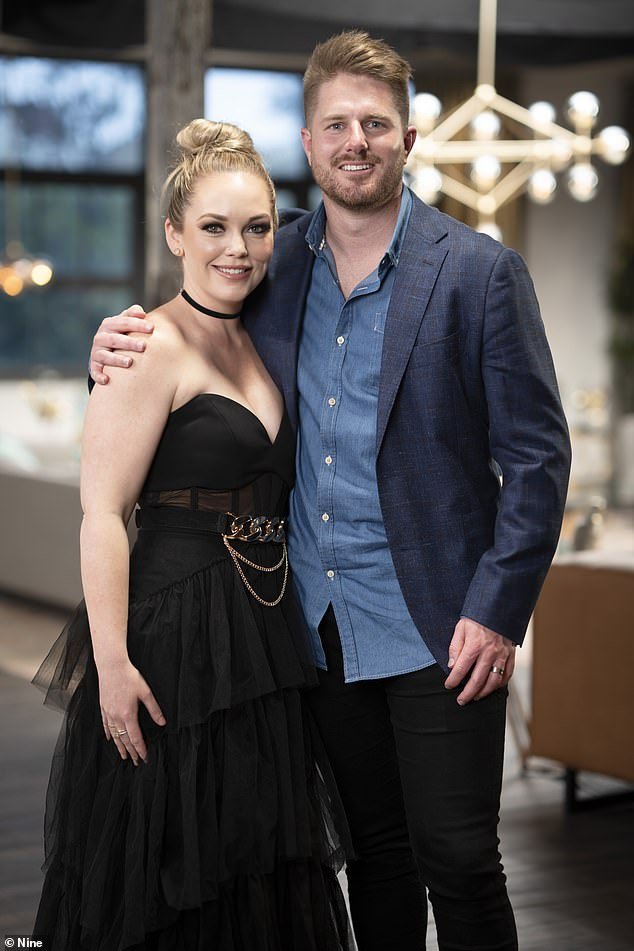 This year’s season of Married At First Sight hasn’t been short of drama.

But despite being the talk of the last few dinner parties, Bryce Ruthven and Melissa Rawson will not be attending Sunday’s final dinner party.

Daily Mail Australia understands the controversial couple decided not to attend following heated clashes with their co-stars at the boys’ and girls’ nights.

Trouble in paradise? Married At First Sight’s Bryce Ruthven and Melissa Rawson, both 31, (pictured) were noticeably missing as their co-stars were pictured arriving at the show’s final dinner party in Sydney on November 26

The couple were noticeably absent during filming on November 26 as the other couples arrived at the warehouse set in Lilyfield, Sydney.

Kerry, 30, put on a leggy display in a yellow one-shoulder dress with a thigh split. 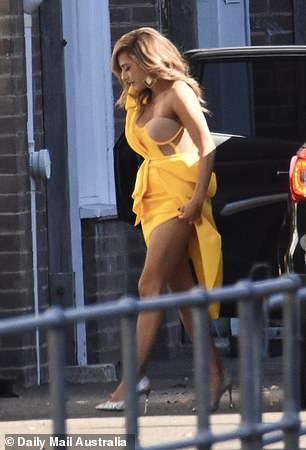 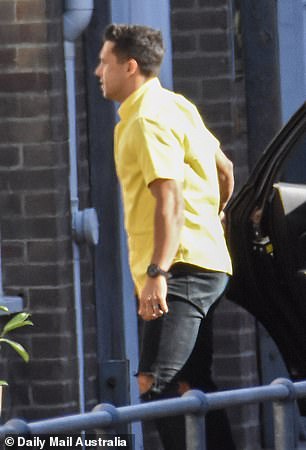 Perfect combo! Johnny Balbuziente and Kerry Knight lead the arrivals as they arrived in matching coloured ensembles at the Sydney warehouse 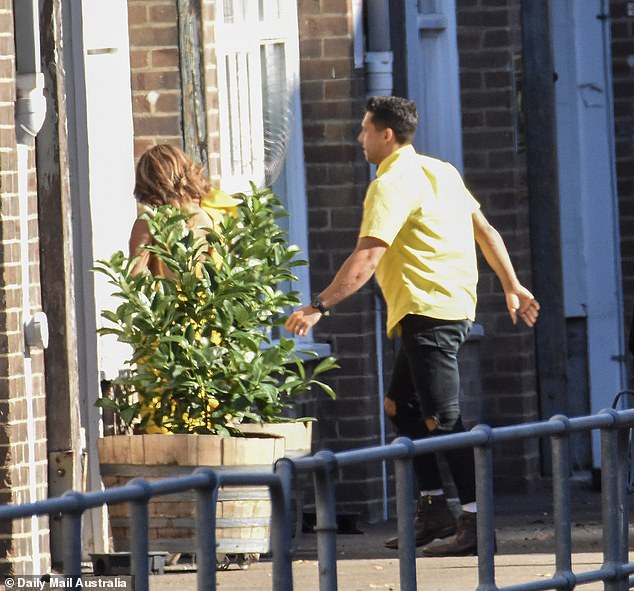 Matching: Upon exiting the car, Johnny was seen following his bride dressed in a coordinated yellow button up shirt and black ripped jeans

The occupational therapist from the Sunshine Coast was all glammed up for the occasion with a face full of makeup.

Johnny followed his bride into the venue in a yellow button-up shirt and black jeans. 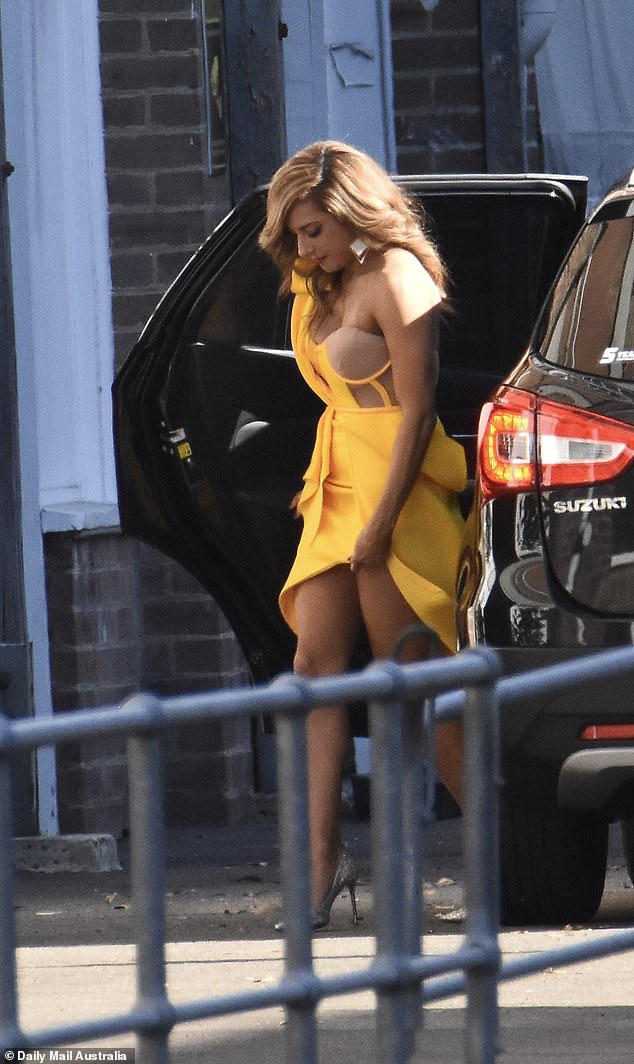 Nice! The Sunshine Coast based beauty was all glammed up for the special occasion with a face full of makeup 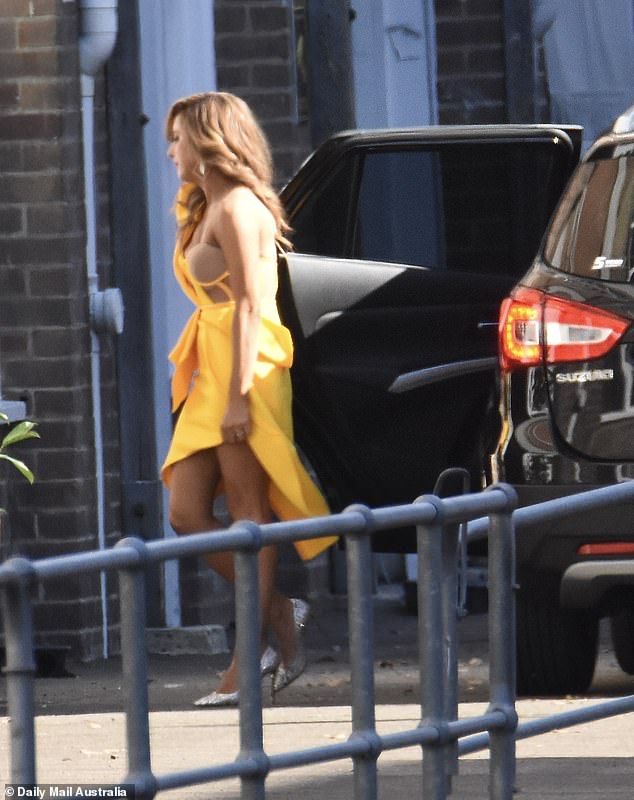 Fellow intruders Georgia Fairweather and Liam Cooper were next to arrive.

The couple filming their entrance several times before producers were satisfied.

Georgia, 25, looked sensational in a maroon gown that featured a thigh split, and a pair of matching stiletto heels. 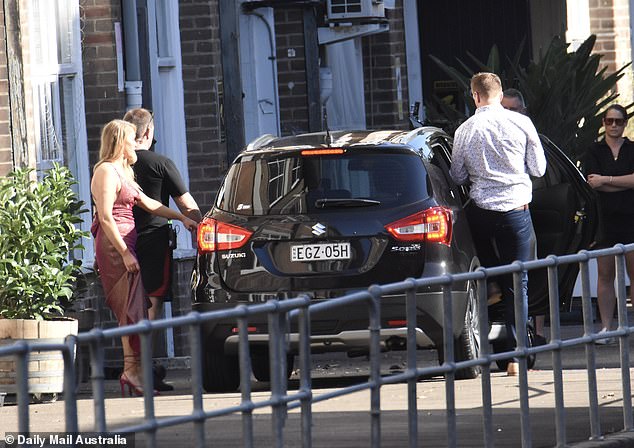 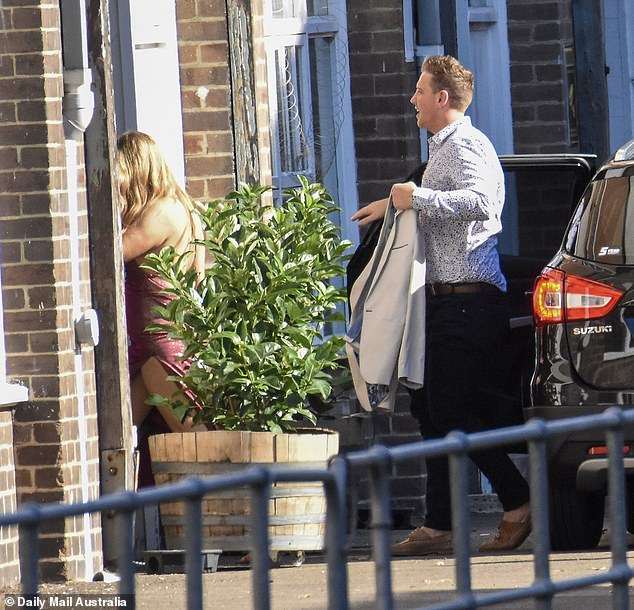 That’s weird! The couple were seen filming several different arrival scenes, including a scene in which the pair exited the car solo and again together from opposite sides 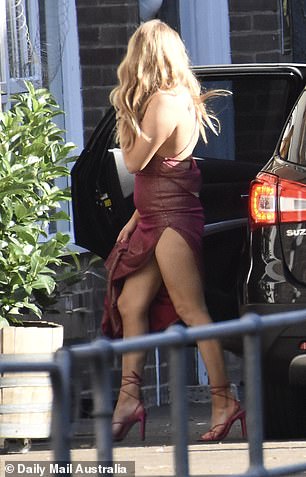 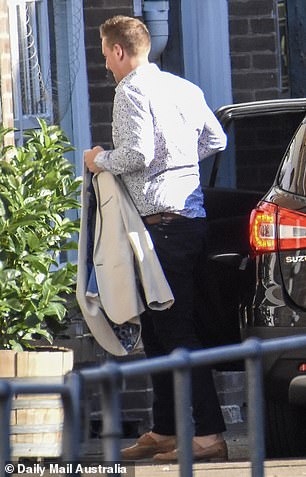 Fashion: Georgia, 25, looked sensational in a well fitted maroon coloured gown that featured featured a split thigh and matching coloured tie leg stiletto heels. Liam opted for a floral button up shirt which he paired with a grey blazer and black denim jeans

Despite their relationship woes, Jason Engler and Alana Lister looked cheerful upon their arrival.

Brisbane-based school teacher Alana, 30, held the door open for her ‘husband’ before they made their way in together.

Alana stunned in a backless floral-print dress, which she teamed with a pair of heels. 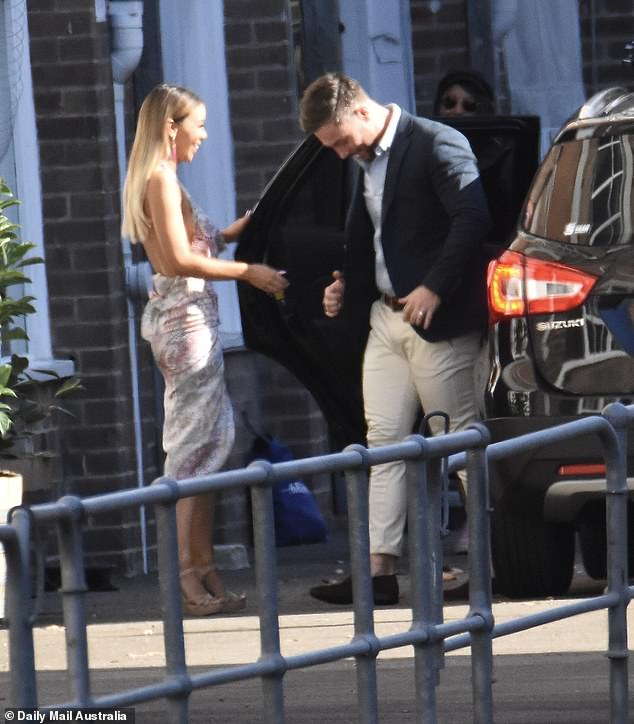 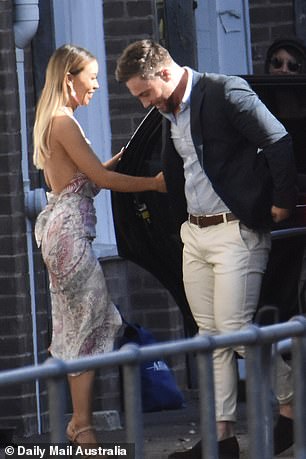 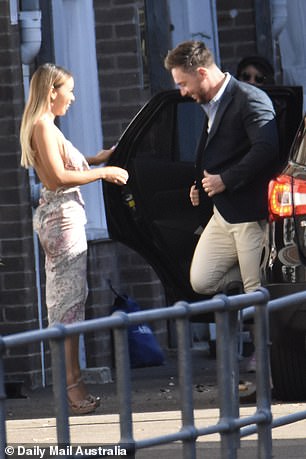 Sweet! Alana was seen holding the door open for her husband before they made their way in together

Melbourne-based couple Belinda Vickers and Patrick Dwyer couldn’t wipe the smiles off their faces as they arrived next.

Belinda put on an eye-popping display in a pink floral jumpsuit and block heels, and straightened her usually curled locks for the occasion.

Patrick was seen theatrically motioning towards his ‘wife’ before they entered the warehouse together. 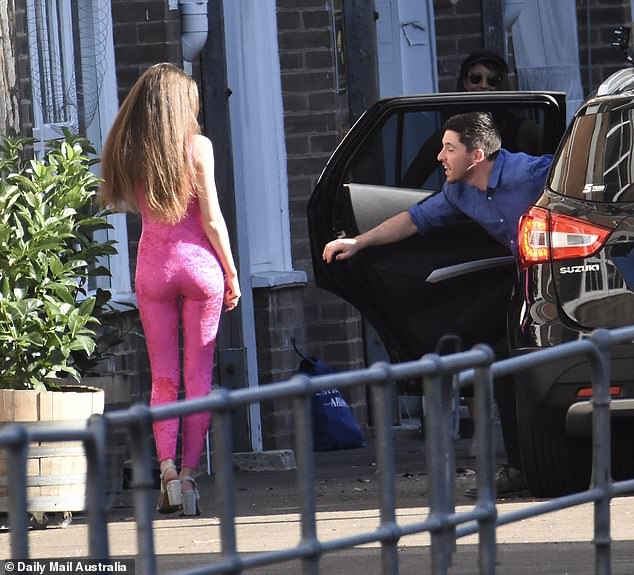 Ready to shine! Melbourne based couple Belinda Vickers and her husband Patrick Dwyer couldn’t wipe the smile off their faces as they arrived 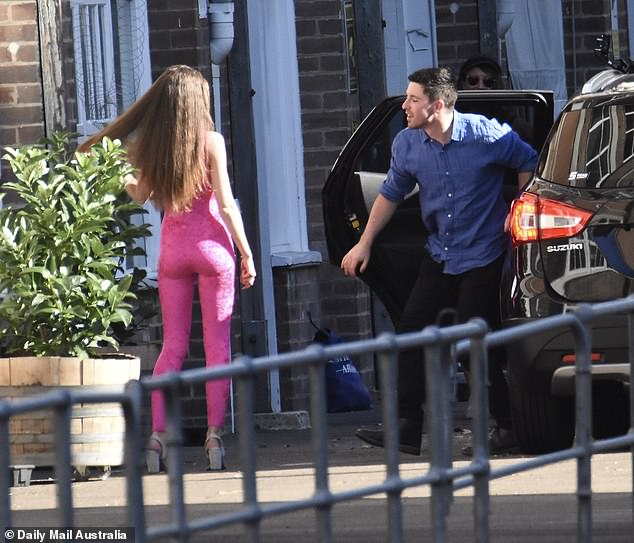 Turning heads: Belinda put on an eye-popping display in a pink floral jumpsuit which she paired with block heels 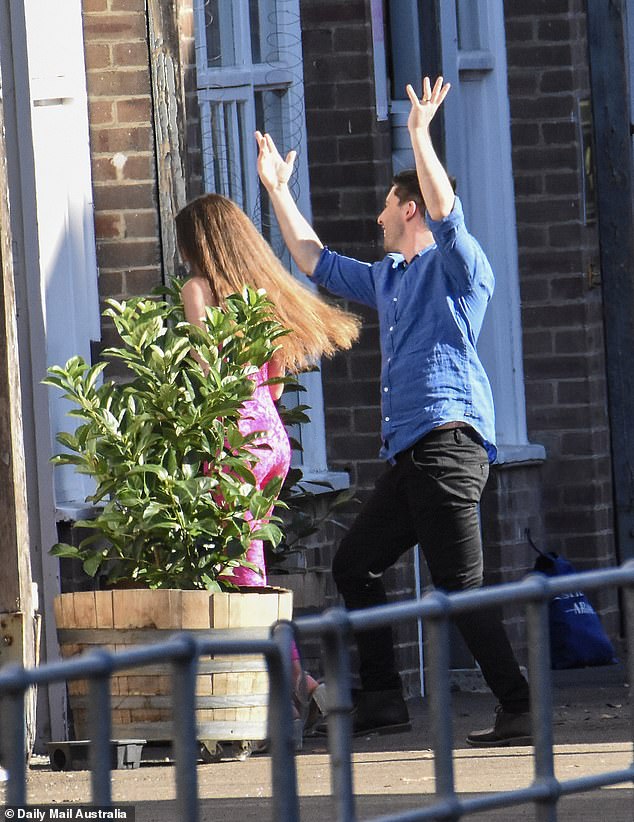 Caring: Her ‘husband’ Patrick, 27, was seen motioning towards his bride before they entered the warehouse together

Jake Edwards and Beck Zemek were the last couple to arrive.

The once-troubled newlyweds seemed to have sorted out their problems by the time of the last dinner party, joining hands as they entered the building.

Business manager Beck, 27, was dressed to impress in a backless pink sequinned gown and high heels. 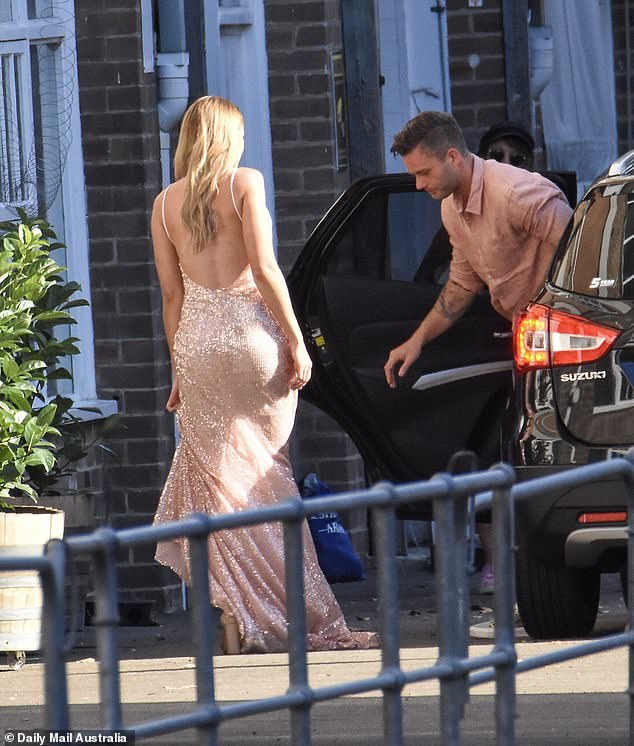 Stars of the show: Jake Edwards and Rebecca Zemek were the final couple to arrive 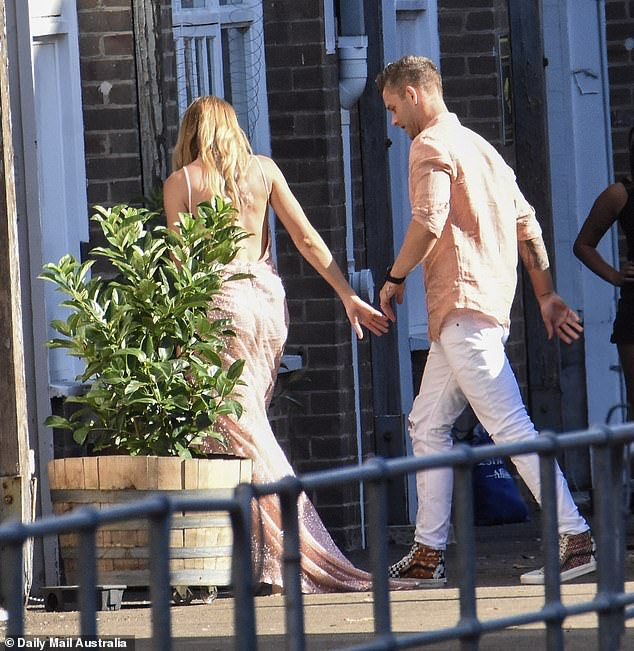 In love: Upon exiting from their vehicle the once troubled newlyweds appeared to have sorted their problems, joining hands before they made their entry into the building 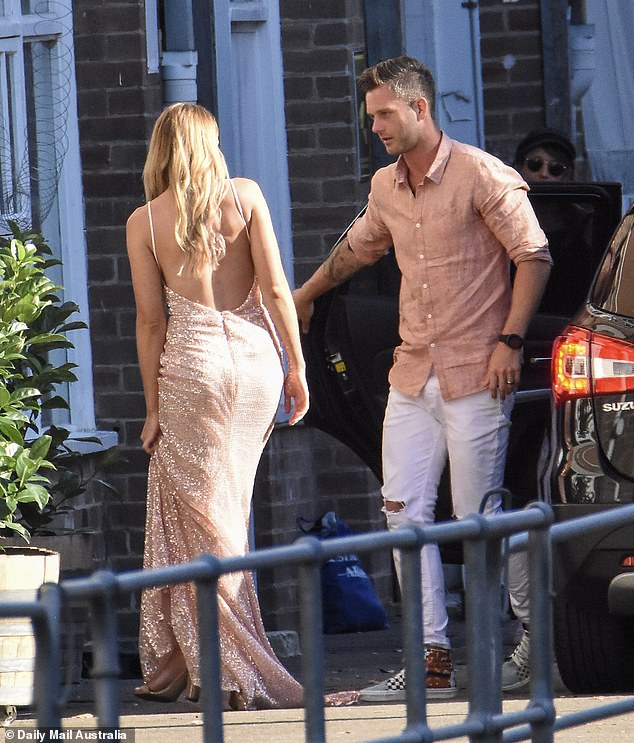 Beck, 27, was dressed to impress in a backless pink sparkly sequin gown and high block heels

Charity CEO Jake, 32, opted for a dusty pink shirt and white jeans, and completed his look with Converse sneakers and a wristwatch.

After filming their entry, the pair were escorted by producers to another building under umbrellas to hide them from the paparazzi.

Daily Mail Australia has contacted Bryce and Melissa for comment. 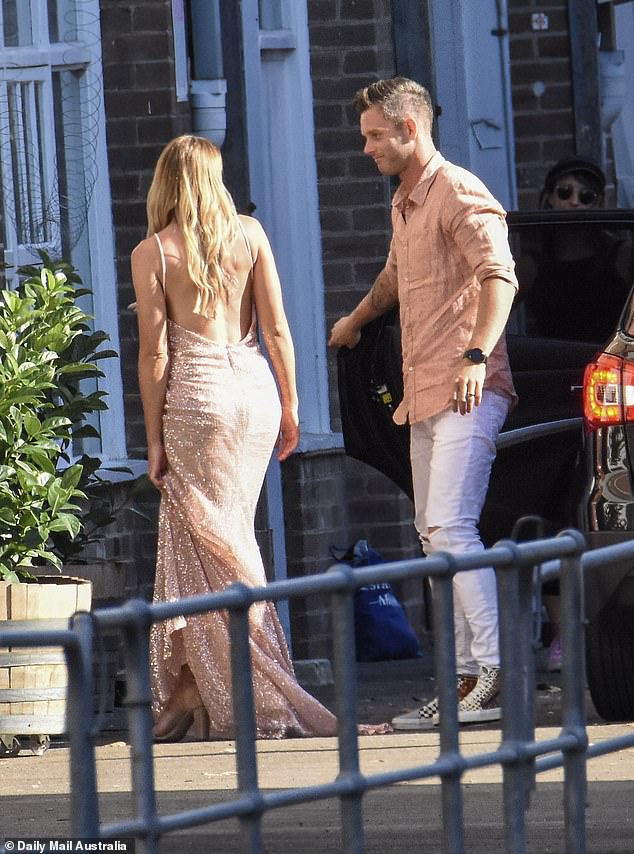 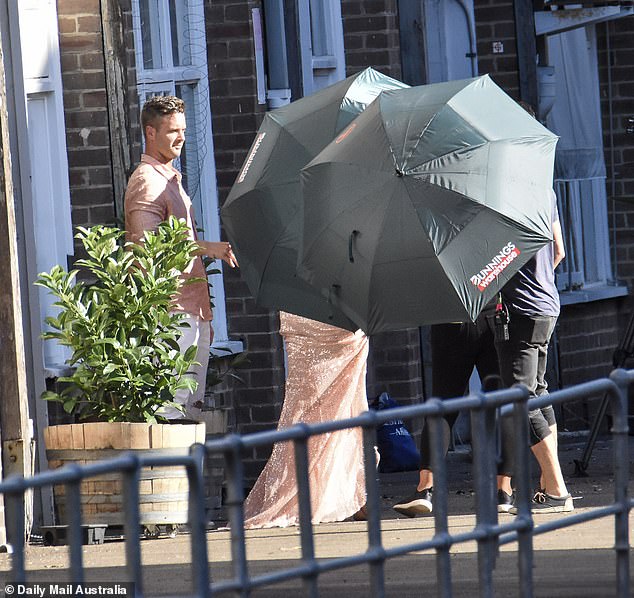 We see you! After filming their entry, the pair were escorted by producers to a different building under umbrellas in an attempt to hide them from the awaiting paparazzi 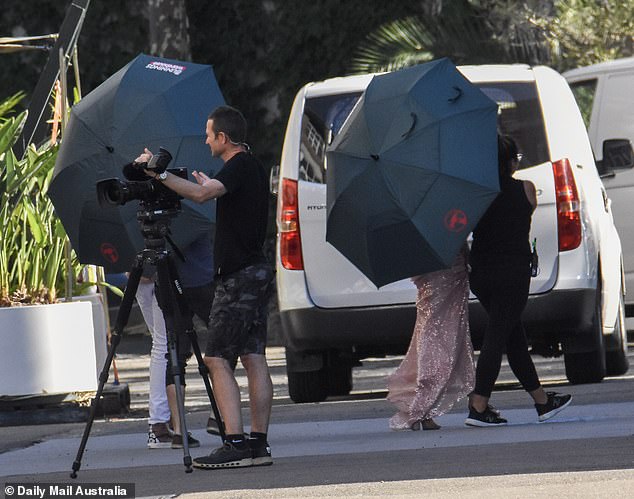 Going somewhere? Melissa and Jake were one of the few couples to be taken away upon making their entry