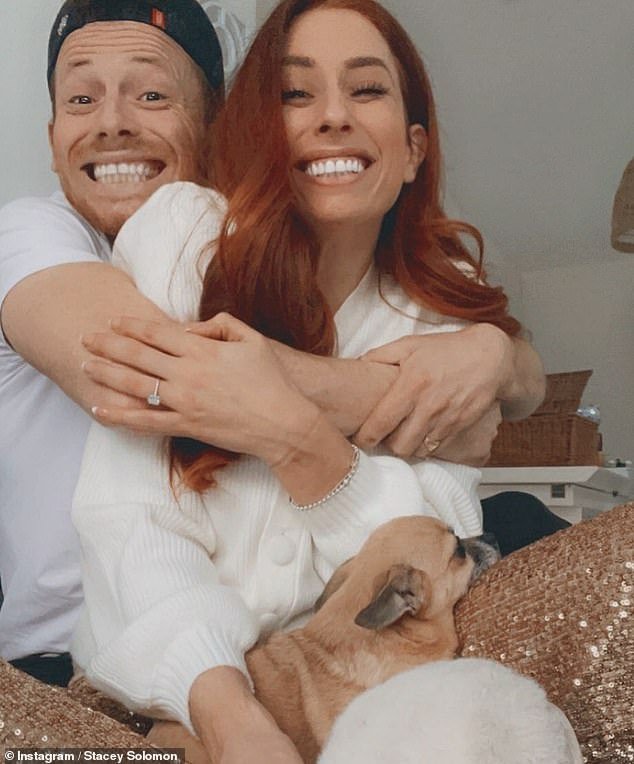 Joe Swash has revealed that he and fiancée Stacey Solomon haven’t been alone for a year amid lockdown and always having one of their four boys at home.

The TV personality, 39, chatted about his home life and how routines have changed during the pandemic while appearing on the Lockdown Parenting Hell podcast.

As well as joking that ‘restrictions have f****d things up’ a little, Joe also candidly chatted about how losing his own father at 12 has impacted his parenting style.

Couple: Joe Swash has revealed that he and fiancée Stacey Solomon haven’t been alone for a year amid lockdown and always having one of their four boys at home

Speaking on the hilarious podcast about when he and Stacey were last alone, Joe said: ‘There’s never not a kid in the house, it’s like a conveyor belt of kids.’

Joking with hosts Rob Beckett and Josh Widdicombe, Joe said: ‘It’s got to be about a year ago, restrictions have f****d it right up.’

‘The thing about lockdown is, if I was a single person, I’d f****ng love this. It would be giving me an excuse to do nothing. 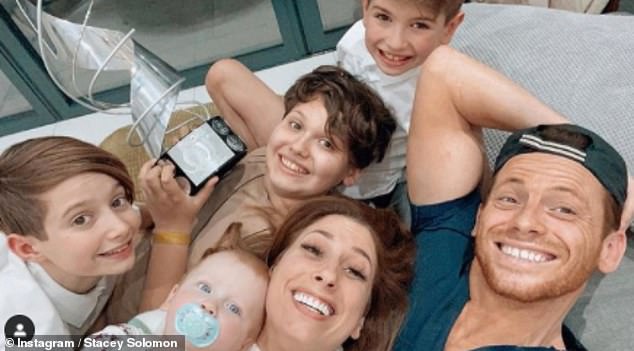 Family: The couple are parents to four boys, with them sharing son Rex, 22 months, and Joe also having Harry, 13, and Stacey being mum to Zachary, 12, and Leighton, eight

Looking forward to a post-lockdown day, Joe said he’d head off to the gym or for a relaxing day fishing on his own.

And although he’s not had much alone time with Stacey, Joe said the boys have been loving homeschooling. He joked that they can get out of bed at 10am and do ‘a bit of Zoom and get back to their computers’.

Joe said he has Harry ‘about 40 per cent of the time’ and that the other boys also go and see their dads for the weekends. 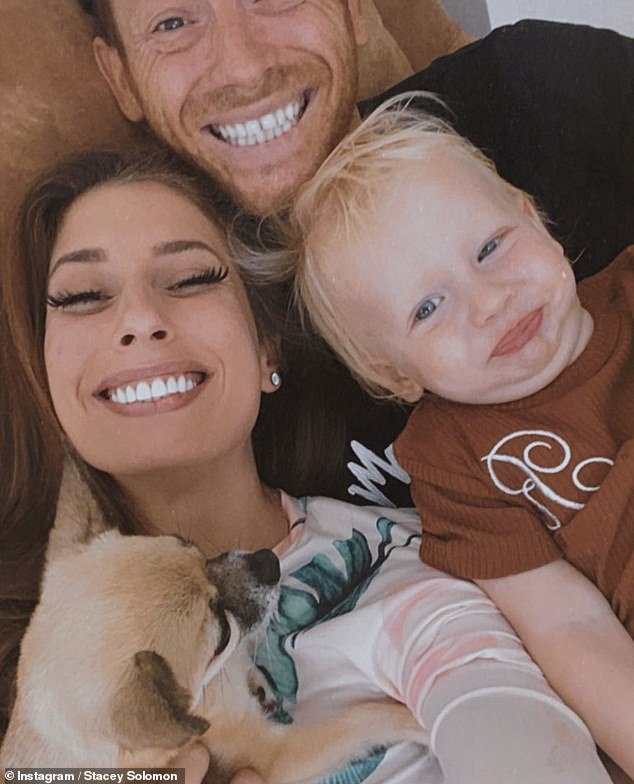 All at home: Speaking about how the past year has been for him, Joe joked that ‘there’s never not a kid in the house, it’s like a conveyor belt of kids’ (pictured with Stacey and Rex)

Joe also gave a glimpse into his parenting style, cheekily joking: ‘I can’t tell you that I’m the most responsible parent out there, because I’m not. We’ll be in the forrest and I’ll see a swing and be like “I’ll let Harry go first incase it breaks”.

The star then joked that when disciplining his boys he’ll light-heartedly have a go at them, saying ‘use your brain Rex!’, which leaves Stacey bemused.

Joe also candidly chatted about how losing his own father has impacted his parenting style, saying: ‘I feel like quite a hands on parent but I’m really affectionate.

He said: ‘I love my boys so I kiss them and cuddle them… Harry’s 13 now and been pushing away for ages! If something happens to me I want my kids to know I’ve kissed them more than anyone else in the world, even more than Stacey. 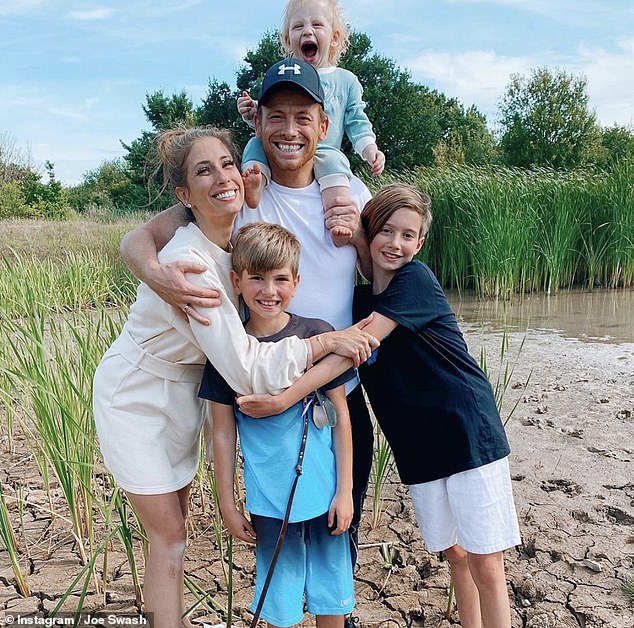 Doting: Joe said he’s very affectionate with his children but admitted he’s not the most ‘responsible’ parent and is always up for a laugh (pictured with Stacey, Rex and his stepsons)

‘In my head, because I lost my dad when I was 12 and I have such good memories of him, I have this morbid way of thinking. I want my kids to know if I’m not here tomorrow I loved them more than anything else in the world.’

Joe also admitted that he’d love to have a daughter, saying: ‘If we had another child and we had a girl that would be it.

‘If we had another boy there’d always be that cloud over our heads until we go again… until we got the girl. We’ll end up like the Waltons,’ he joked.

Joe and Stacey got engaged on Christmas Eve and are planning a summer wedding for this July, with Stacey saying their sons will give her away on the special day.

Talking to Hello! magazine she revealed they didn’t want to make just one boy best man and that she would like them all to walk her down the aisle alongside her father.

And the bride-to-be won’t officially become Mrs. Swash after the wedding day as she wants to have the same surname as her children.

Talking to Zoe Ball on BBC Radio 2 about her upcoming wedding, the TV personality said: ‘It is a really funny one, obviously Joe would love me to have his second name.

‘Nothing wrong with his second name but because of kids I want to have the same surname as the kids,’ she added: ‘Maybe I will double-barrel it?’

She continued: ‘When my sister got married I felt a bit heartbroken, like ‘You aren’t my full sister anymore?’.’

The Loose Women star also admitted that she is trying to ‘stay positive’ during planning amid the current Covid restrictions surrounding marriage ceremonies.

Earlier this month, Boris Johnson warned June 21 is the earliest date for full-size weddings but even then it will be subject to a review of the Government’s ‘four tests’. 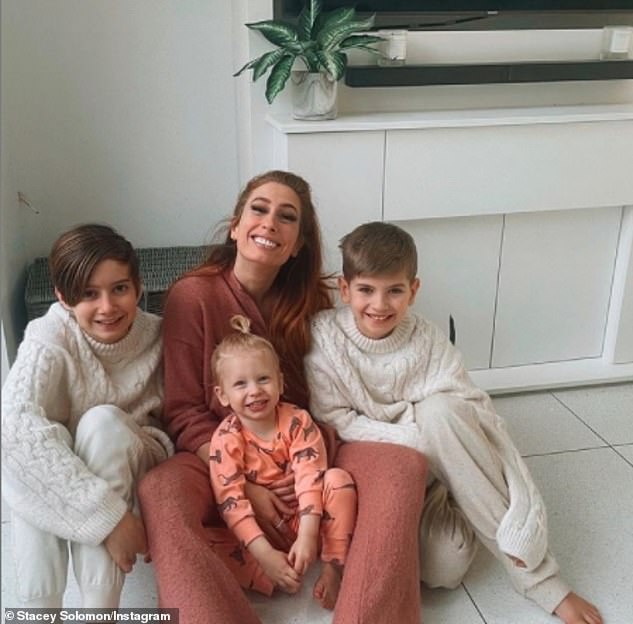 Last name: Stacey won’t officially become Mrs. Swash after the wedding day as she wants to have the same surname as her children (pictured with Zachary, Rex and Leighton)