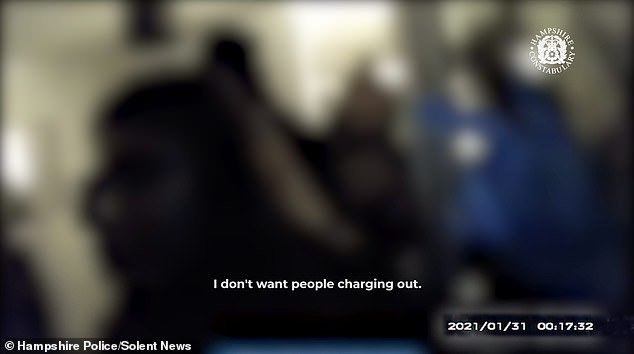 Shocking bodycam footage shows the moment police breaking up an illegal party are charged by teenagers trying to flee without paying £800 fines.

Hampshire Police were investigating a house in Portsmouth after receiving reports of a gathering when they came across the group of lockdown rule-breakers.

But as officers started to take attendees names and issue them with fines, stunning video shows the revellers try to charge past the police and make a run for it.

Police body-cam footage shows how revellers were ‘pushing and shoving’ officers breaking up the party at 10.20pm.

In the video clip, an officer says: ‘Right, everyone’s going to be leaving one at a time, so we can process you guys and get your details. I don’t want people charging out.’

But just five seconds later the same officer has to say ‘stop pushing out’ as more people surge to the front door in a bid to escape.

The short-lived push ends and 19 revellers, who police said were mostly in their late teens to early 20s, were told to pay up for the January 30 party.

In the video clip, an officer says: ‘Right, everyone’s going to be leaving one at a time, so we can process you guys and get your details. I don’t want people charging out.’ But just five seconds later the same officer has to say ‘stop pushing out’ as more people surge to the front door in a bid to escape

Hampshire’s Assistant Chief Constable Maggie Blyth today said: ‘This party is not a one-off, we’re increasingly seeing reports of gatherings of people from multiple households as some members of the public are struggling to observe the national restrictions in place.

‘Not all these gatherings are of this size, but they are all breaching the current Health Protection Regulations and putting lives at risk.

‘The message is simple, stay at home.

‘We’re releasing this video to demonstrate just how serious incidents like this are. The transmission vectors available for the virus in circumstances like this are numerous.

‘The people attending this party were putting themselves and their loved ones at risk from Covid-19, not to mention the wider community. It’s actions like this that place increased and unnecessary pressure on the NHS.

‘Anyone who does not follow the Health Protection Regulations faces enforcement action. 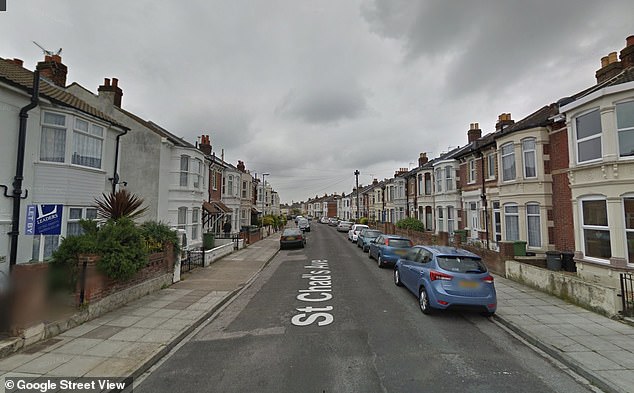 The party at an Airbnb property in the city saw 19 people each handed £800 fixed-penalty notices – more than £15,000 in total – just a day after the charge increased from £200

‘It’s disappointing that the minority are flouting the regulations when the vast majority of people in our communities have made such a concerted effort in such challenging times.’

Dozens of patrol cars descended on the property after outraged locals complained to police about large numbers of young men and women turning up at the house in the North End area of the city.

One neighbour, who wished to remain anonymous, said many of the women – believed to be in their teens and early 20s – looked like they were ‘dressed for a nightclub’.

He said: ‘It is this shameful behaviour that brought us to lockdown, and it is the attitude that will keep us here for far longer than is necessary.’

The person who booked the Airbnb stay has since been suspended from the short-stay lettings company’s platform.

Three men were arrested at the party.

A 27-year-old arrested over criminal damage has been told he faces no action. Another man, also 27, has been bailed until March 5 after being held on suspicion of assaulting an emergency worker. A third man, 24, faced no action over a public order offence.

‘They need to behave appropriately, not just within the lines of the law but to stay safe.

‘Some of the people running away are abusive in their behaviours, they get themselves into trouble and put themselves at risk.’

Hampshire police have issued 592 fines since March 27 last year – 109 in the November lockdown and 71 in the period that covers the latest lockdown that started in January.

National Police Chiefs Council figures, that run up to January 17, show the force has fined 27 businesses.

Some 92 per cent of Covid-19 infections in Portsmouth are made up of the more transmissible Kent variant.

Hampshire police received 28,085 reports to its Covid-19 breach report online between April 2 last year and February 4 this year and officers were sent to 7,387 Covid-19 incidents within Hampshire between February 27 and February 4.