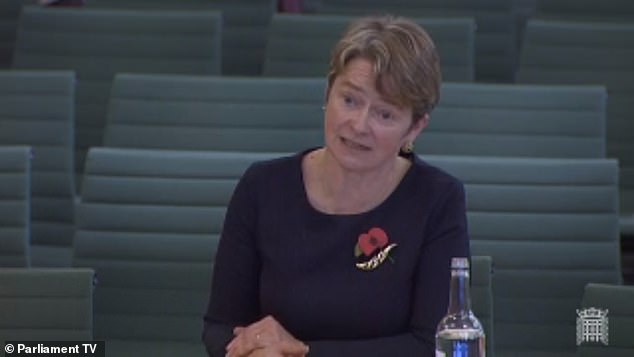 England’s Test & Trace chief Dido Harding today said nobody in the organisation was able to predict that demand for coronavirus tests would surge when schools went back.

Lady Harding, who is the chair of the testing and tracing system, blamed the start of the new school year for demand ‘significantly outstripping’ test capacity.

September saw huge backlogs in the testing system across the country, with hundreds complaining they were unable to book tests anywhere near their homes and availability having to be throttled so labs could process the tests that were done.

In a meeting with MPs this morning, Lady Harding admitted the ‘balance between supply and the demand forecast wasn’t right’.

And when pressed on when the next peak in demand for tests might be, the testing chief repeatedly refused to answer the question and said it wasn’t her job to predict it.

Angry MPs insisted it was and that it was her job to plan for how the system would cope when it came.

Dr Susan Hopkins, the chief medical adviser to Test & Trace, said there would be sustained pressure on the test system over winter and that the system would need to be capable of more than the 500,000 per day that officials currently claim it can do.

Baroness Dido Harding, chief of NHS Test & Trace, appeared in front of MPs on the Health and Social Care and Science and Technology committees this morning