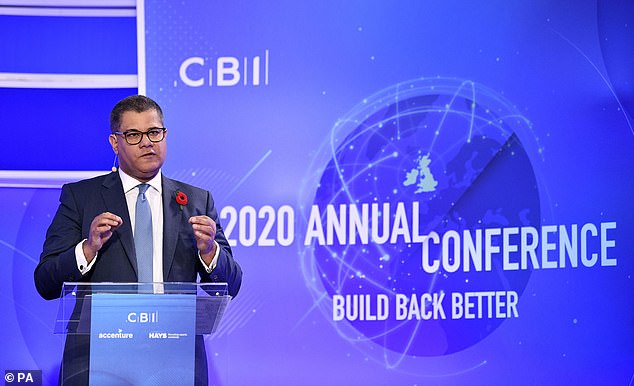 Alok Sharma has defended a decision to continue an official visit to South Korea after a member of his private office was diagnosed with coronavirus.

The Business Secretary jetted to Seoul on Saturday October 24 for a series of meetings designed to boost trade relations between the two nations.

Two days previously he had attended a meeting with staff from his private office. One of them began feeling ill on the Sunday after the Mr Sharma left for Asia and received a positive test result the following day, Monday October 26.

But after being informed of the illness, Mr Sharma continued his trip, meeting politicians including members of the Korean parliament.

A spokesman for the minister today said that he had tested negative for coronavirus before leaving for Korea and again on landing. A negative test result is a current entry requirement for the country. 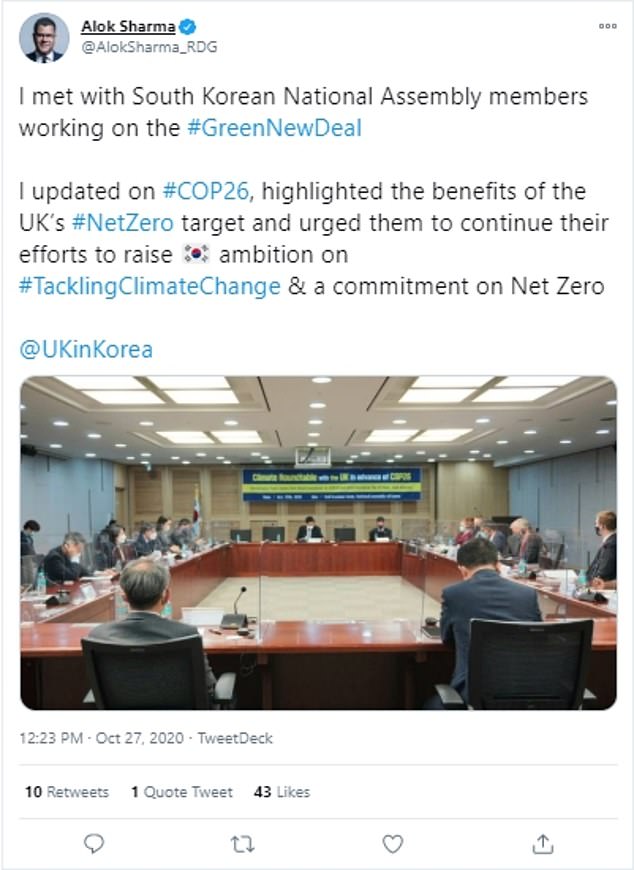 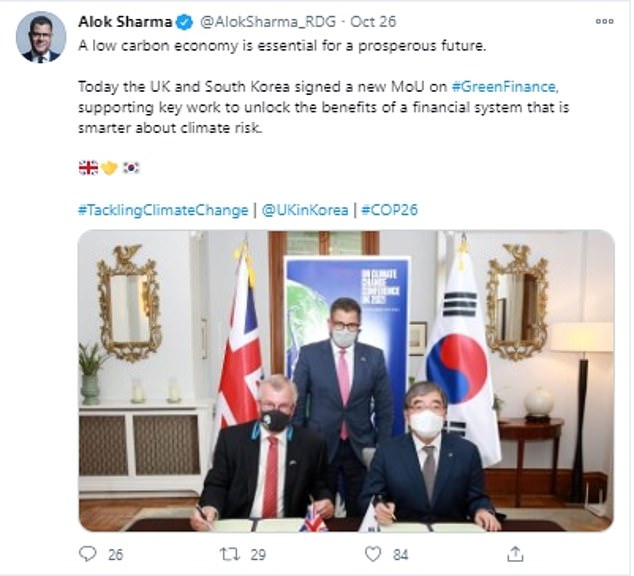 But after being informed of the illness, Mr Sharma continued his trip, meeting politicians including members of the Korean parliament

‘Mr Sharma and the staff member were not in close contact at any stage. Mr Sharma has not been contacted by NHS Test and Trace or the NHS Covid-19 app and has not been told to self-isolate,’ he said.

Unions representing staff at the Department for Business, Energy and Industrial Strategy have questioned the Covid security in place and have written to the Beis permanent secretary Sarah Munby, the Guardian reported.

According to a PCS union health and safety report seen by the paper: ‘Ministerial offices, especially SoS [secretary of state], were very crowded and by far the busiest part of the building.

‘The offices apparently had been given a ”dispensation” … to allow two people to sit on each bank of desks, contrary to the guidance applying in the rest of the building.

‘Whilst they may well have been sitting 2 metres apart, because of movement in the office and narrow corridors, staff were often passing each other very closely and we observed staff standing closer together than two metres.’

A PCS union spokesman said: ‘These revelations are extremely shocking and Alok Sharma has some serious questions to answer.

‘Our members will be extremely worried at potentially being exposed to Covid-19 and will rightly want to know if proper safety processes were followed.’

A Beis spokeswoman added: ‘We have put in place extensive measures throughout the building to ensure that the two-metre social distancing rule is being observed, and to maintain a covid-secure work environment.

‘In line with government guidance, the vast majority of our staff continue to work from home, and have done since the beginning of the pandemic. But the extensive measures we have taken ensure that a small number of colleagues who cannot carry out their normal duties from home are able to use the office, as well as those whose home or personal circumstances mean that they need to be able to access the building at least some of the time on a voluntary basis.’