From a sleeping lemur to a fog-shrouded bridge: The stunning images shortlisted in a worldwide black-and-white photography competition

More than 10,219 images were submitted to the photography contest, run by photo app Agora The pictures include an atmospheric shot of a monk in Myanmar and a stunning shot of a rare Asian elephantHere we also present pictures of a foggy river in Bangladesh and Death Valley in California

By Jennifer Newton for MailOnline

These black-and-white images are something to behold – powerful, mesmerising and enchanting.

It’s no wonder they were shortlisted in a worldwide photography contest.

They were picked out from 10,219 entries in a competition run by photo app Agora that asked photographers to submit their best black-and-white photos.

The stunning and varied images here capture scenes that range from a foggy river in Bangladesh to a sweet snap of a sleeping lemur in Indonesia and a dramatic image of Death Valley in California.

Scroll down for images that’ll prompt a rainbow of emotions…

Bangladeshi photographer @mobilephonephotographybd captured this mesmerising shot of a bridge in Ishurdi, Bangladesh, shrouded in fog 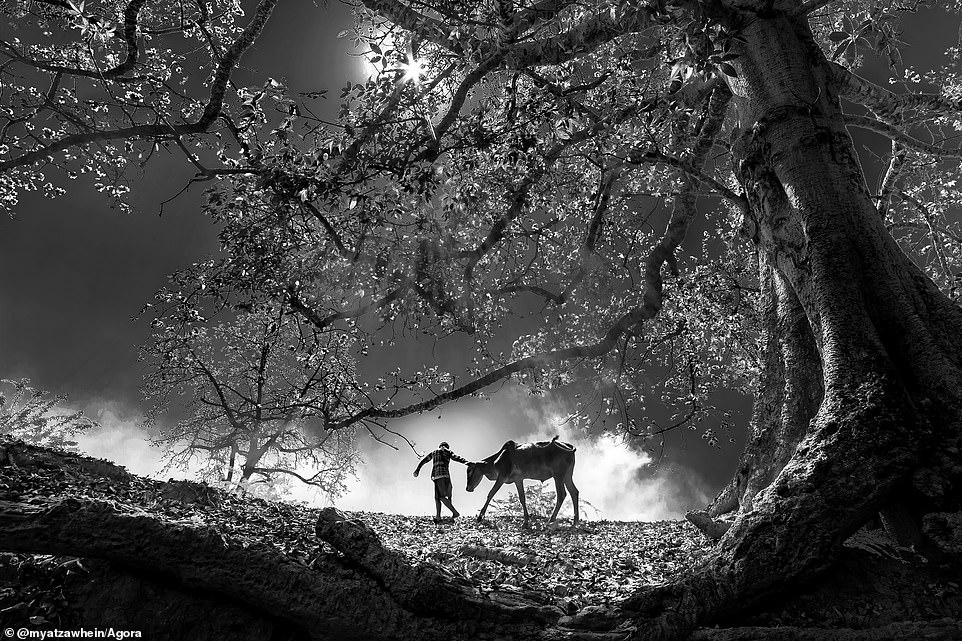 Snapper @myatzawhein took this picture, which shows a herdsman trying to lead a bull back to its barn in Myanmar. The photographer said: ‘The animal estimated that, given the position of the sun in the sky, it was too early to return and refused to move forward’ 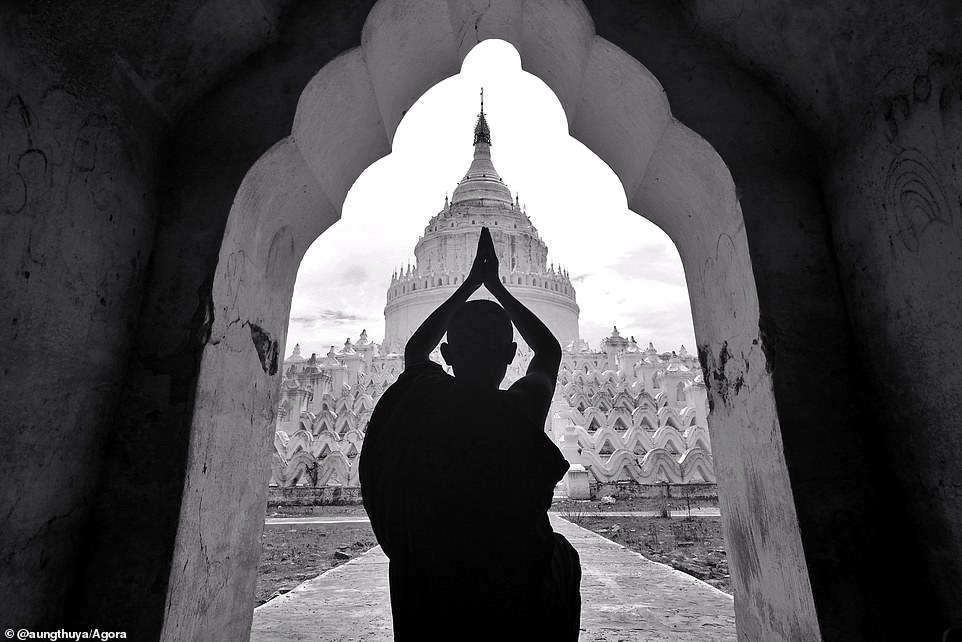 This image, called The Pilgrim, was snapped by photographer @aungthuya at the Hsinbyume Pagoda on the western bank of the Irrawaddy River in Myanmar. The photographer explained: ‘When I got there, I noticed a young novice paying his respects in this incredible framed view’ 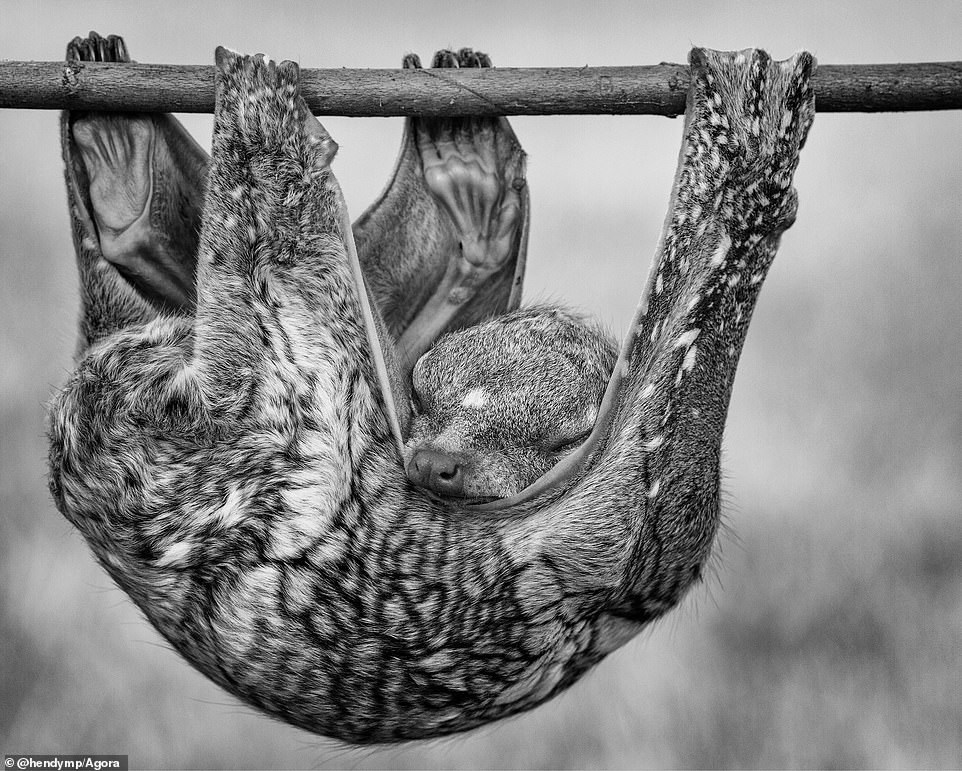 Indonesian photographer @hendymp captured this sweet shot of a sleeping flying lemur in West Kalimantan, Indonesia. He said: ‘This Sunda flying lemur was taking a well-deserved nap in my friend’s garden. He looked so peaceful!’ 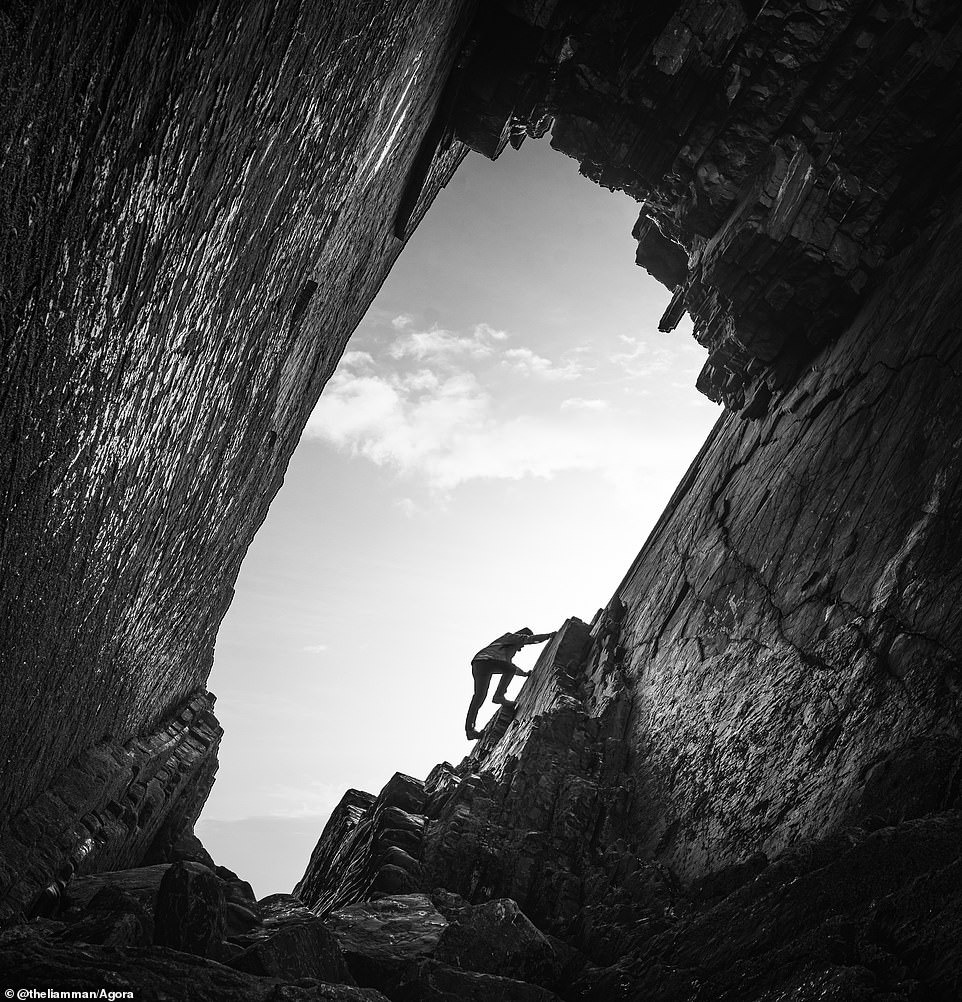 British photographer @theliamman snapped this shot of Blackchurch Rock in North Devon. He called the image ‘scrambling’. He said: ‘This image was taken during the middle of the storm that blew in off the Atlantic. I had to battle 60mph winds to take this photograph. Luckily there was a gap in the clouds that allowed the sun to backlight this scene, reflecting off the wet rocks’ 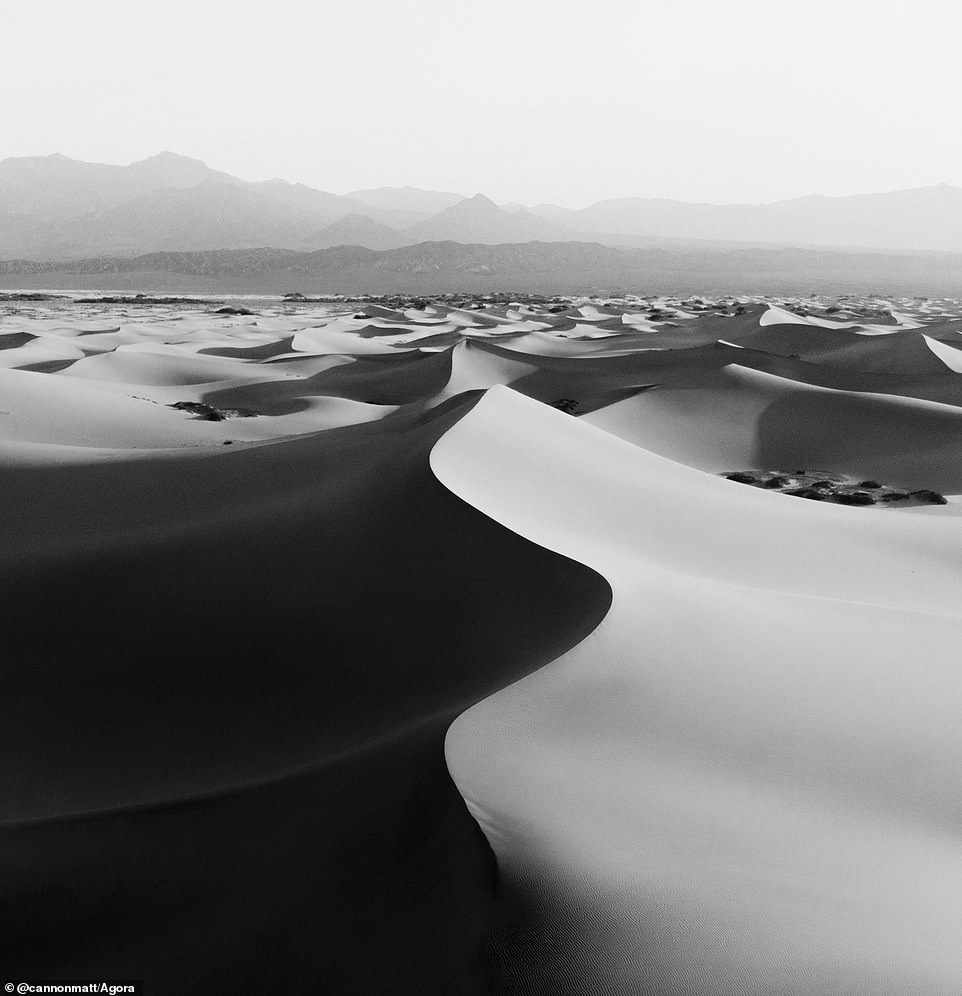 This hypnotic shot of Death Valley in California was captured by UK photographer @cannonmatt early in the morning. He said: ‘I wanted to reveal the hidden patterned beauty and interaction between light and dark in the early morning at the Mojave dunes’ 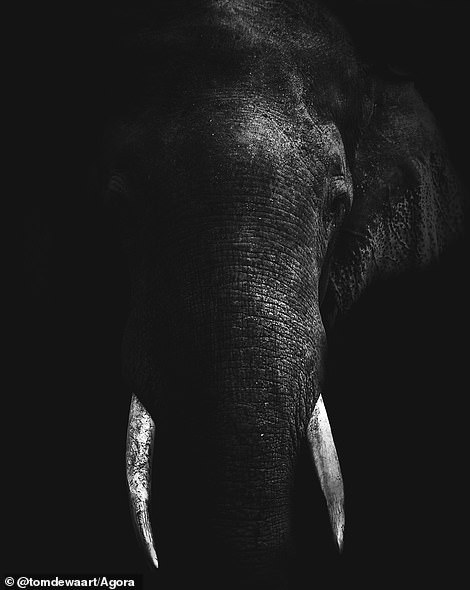 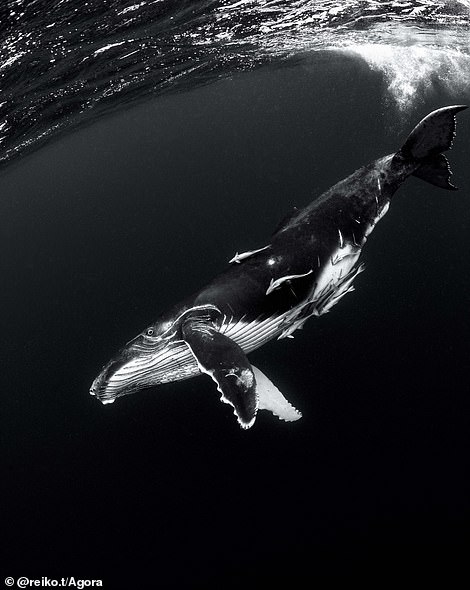 This powerful image of a rare male Asian elephant, left, was taken by Dutch photographer @tomdewaart in Somawathiya National Park, Sri Lanka. He explained: ‘We were so surprised by him coming so close to us that we weren’t prepared for it at all. I had my telephoto lens on and had to completely lean back out of the jeep to get him in the shot. Filled with joy, I knew right away that a black-and-white version would work out perfect. Black and white for me is something that shouldn’t be overused and has to be done right’. Meanwhile, Japanese snapper @reiko.t shot this stunning image, right, of a humpback whale calf in Vava’u, Tonga. The photographer explained: ‘This four-month-old humpback whale calf was so friendly, swimming close to me. Its beauty and strength cannot be expressed in words’ 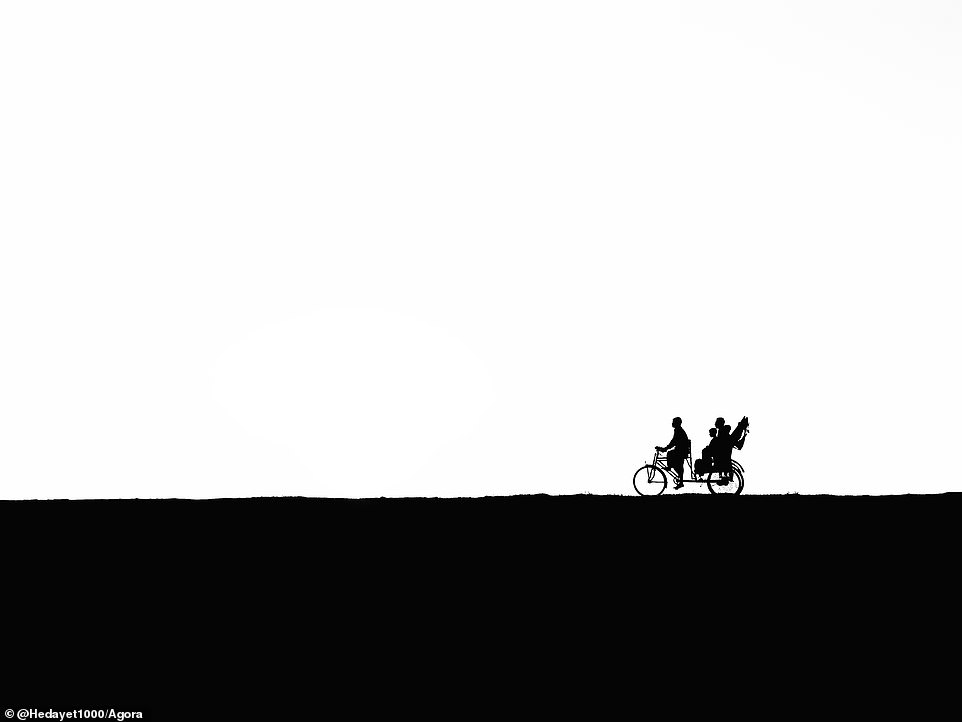 This shot, called ‘travel away’, was taken by @Hedayet1000 in Bangladesh and shows a rickshaw driver. The photographer said: ‘Rickshaw drivers face a hard life in Bangladesh. They usually come from extreme poverty and work non-stop, facing stress, pollution and heat to make a living’ 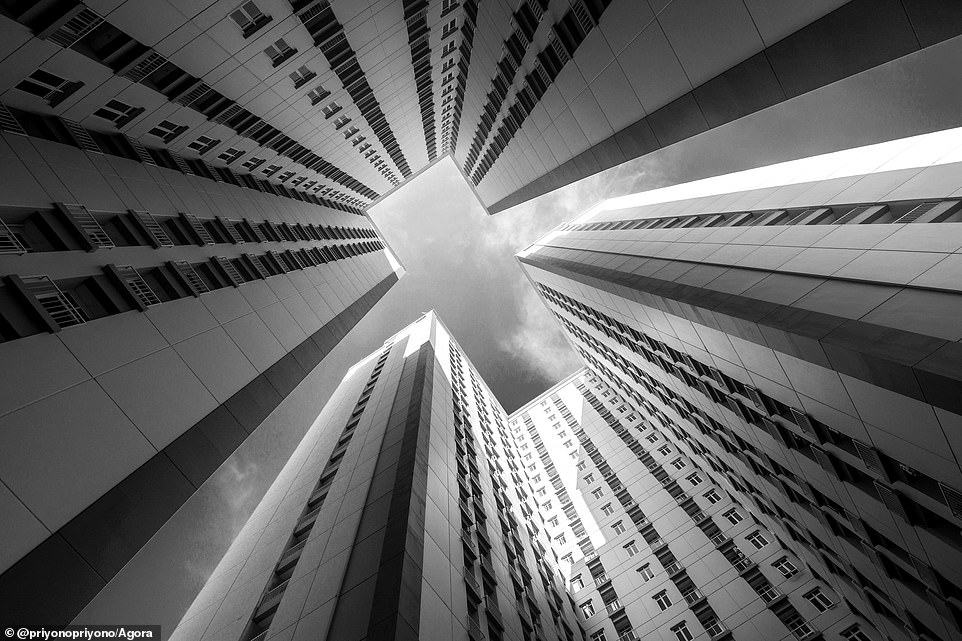 This mesmerising skyscraper image was snapped by Indonesian photographer @priyonopriyono in Surabaya, Indonesia. They said: ‘Life is all about good and bad, small and big, low and tall, black and white. Nowadays, buildings grow to squeeze human life. It makes you think about how small we are’