A rare opportunity has emerged to purchase the London mansion that once homed Princess Diana’s ‘wicked step-mother’ – so long as you’ve got £40 million to spare.

The extravagant six-bedroom townhouse, built in 1902, can be found on South Street in Mayfair and can be yours for the staggering eight-figure sum.

The central London property was once home to the best-selling romance novelist and socialite, Dame Barbara Cartland, during the Second World War.

A London mansion, boasting 18 windows at the front, which was once home to Princess Diana’s ‘wicked step-mother’ has gone on the market 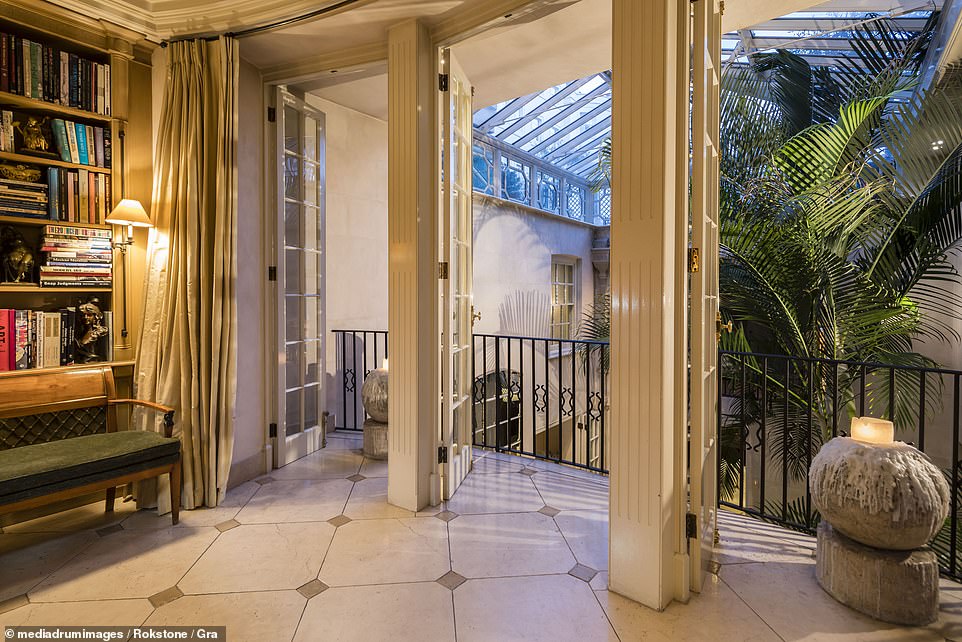 The extravagant six-bedroom townhouse, built in 1902, includes an indoor balcony looking over the rest of the house, and can be found on Mayfair’s South Street 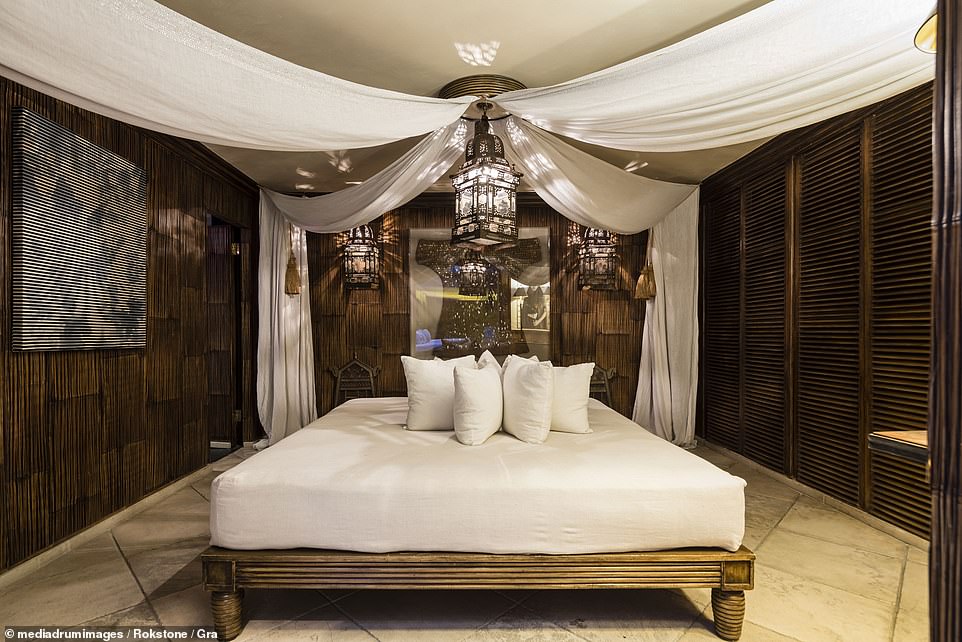 The luxurious property, which boasts six stunning bedrooms, has played host over the years to a number of politicians, royal relatives and celebrities 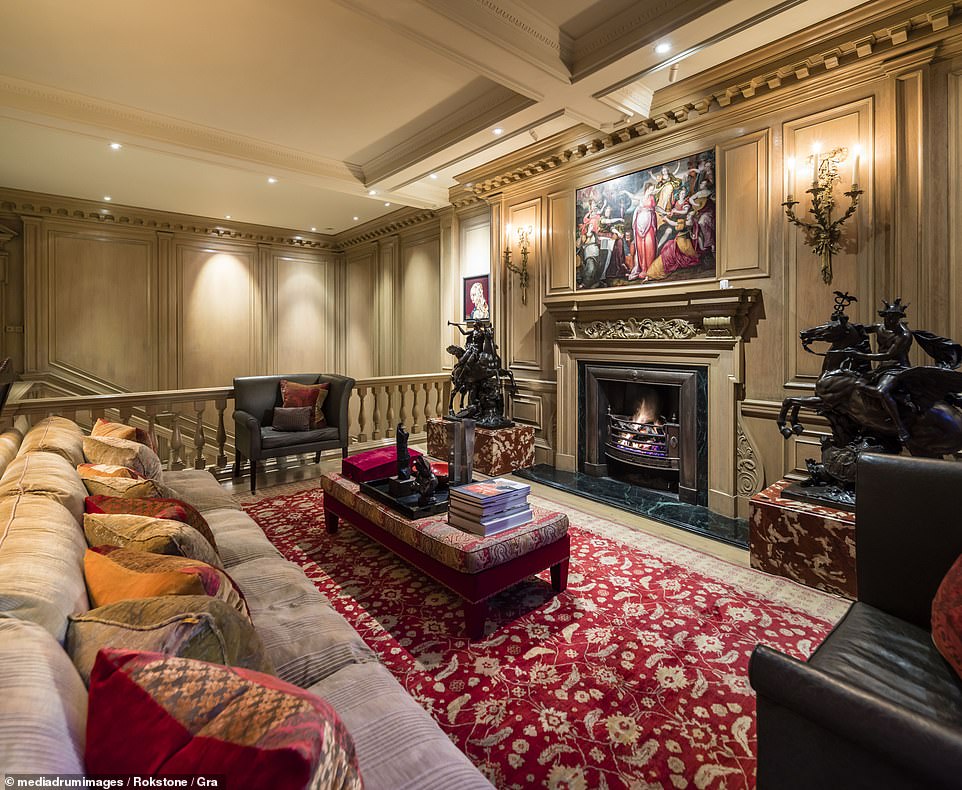 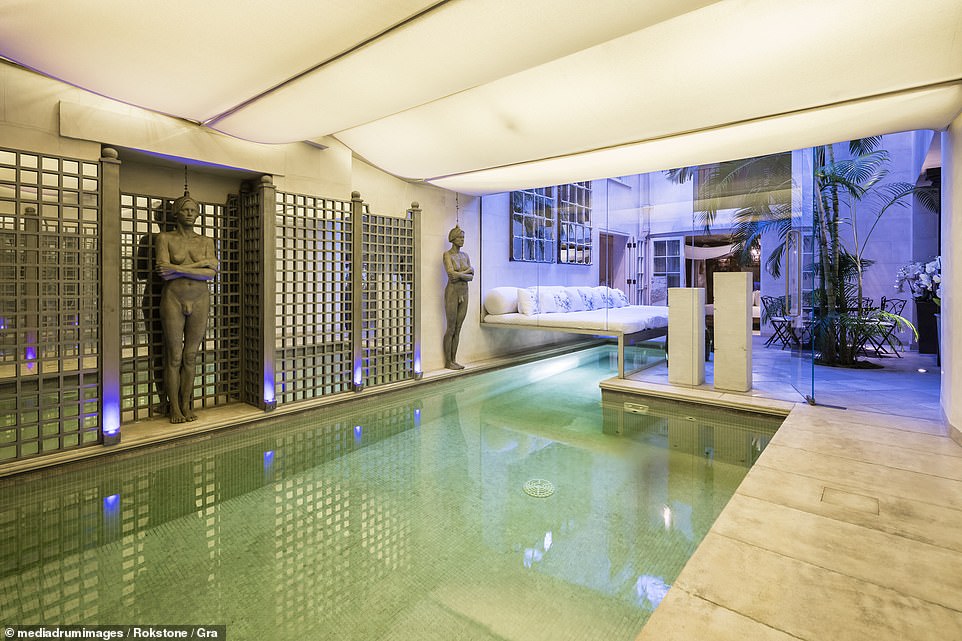 The double-fronted mansion in Mayfair features a lower floor dedicated to wellness, complete with a pool, bar, and sauna as well as human sculptures 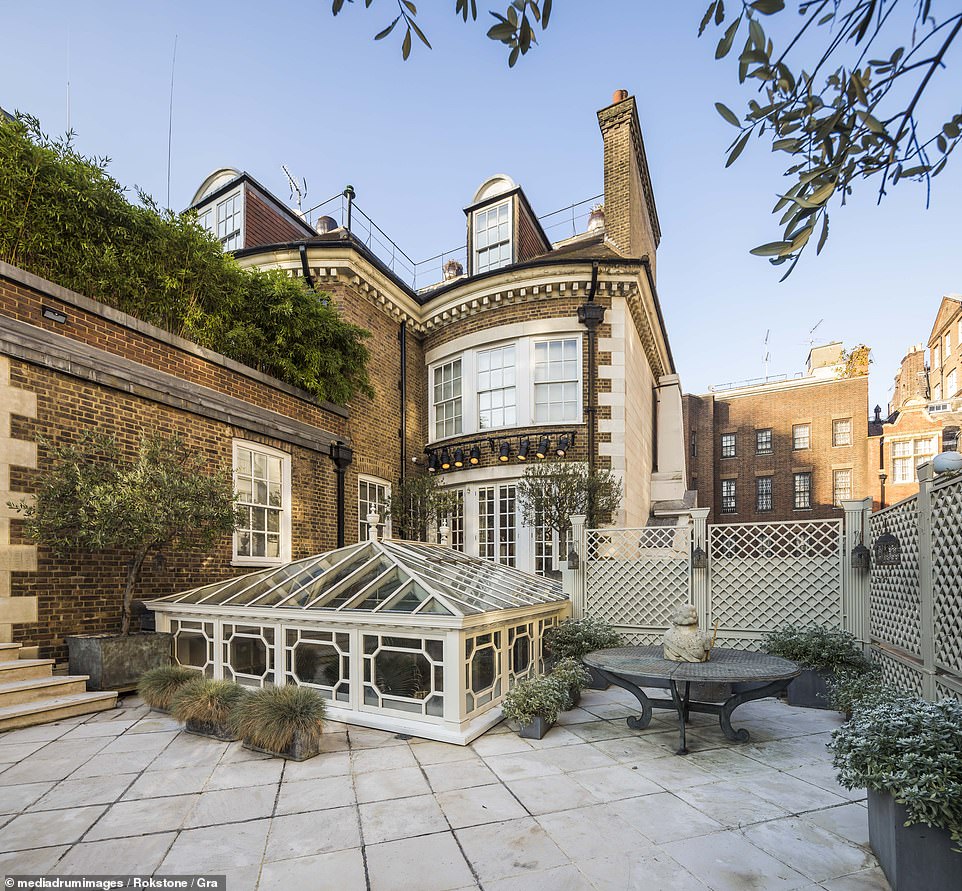 The unique property, available for a cool £40 million, offers three different areas of outside space for the owner to enjoy – especially rare for Mayfair 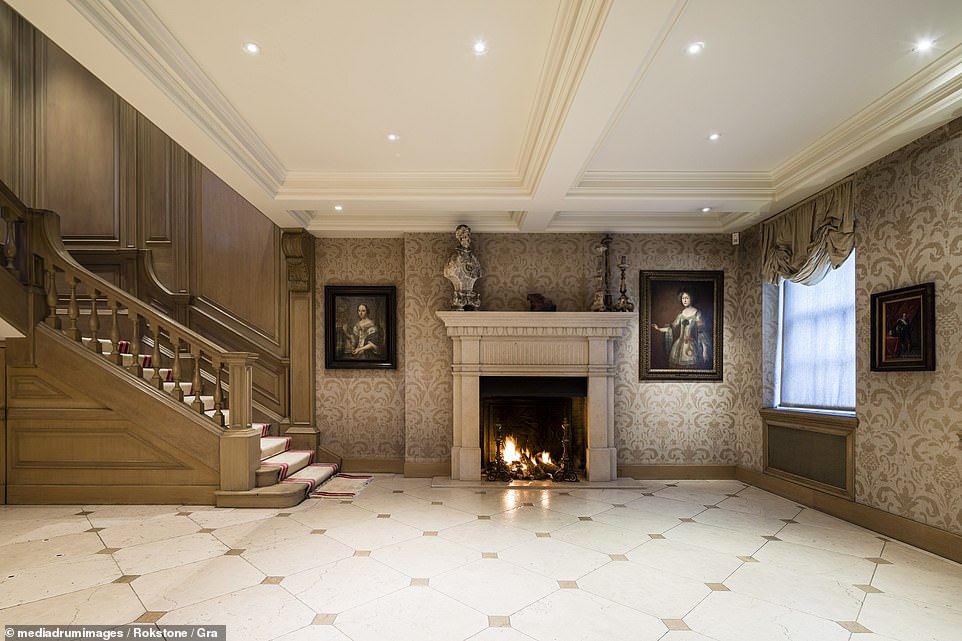 The luxurious shopping streets of Bond Street and Savile Row are a mere five-minute walk from the property, which has grand staircases connecting its different floors 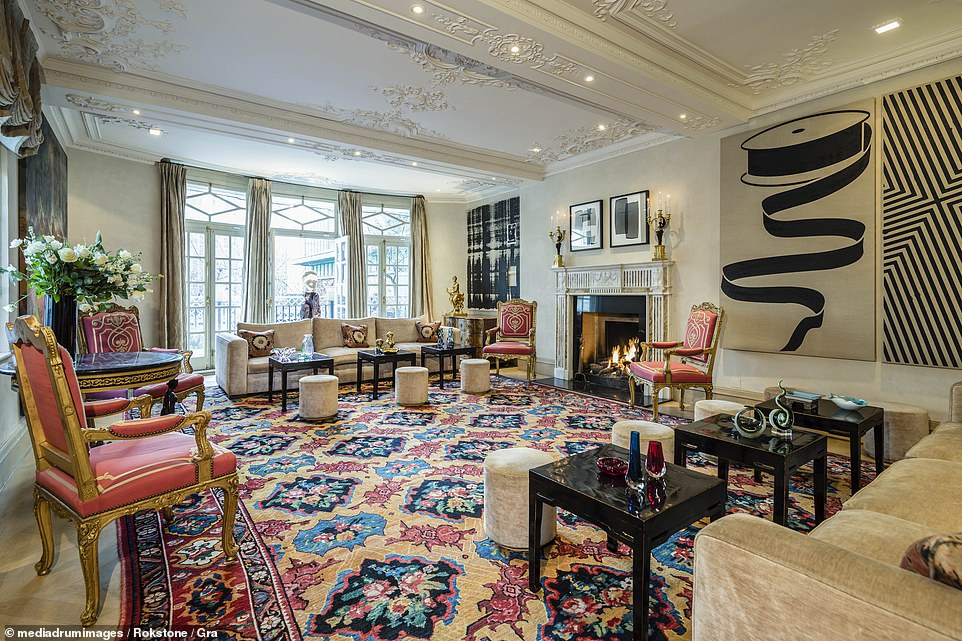 The property has been designed by two famous architects: Detmar Blow built the Edwardian mansion in 1902 while the modern-day wellness centre was designed by Nicholas Rakic 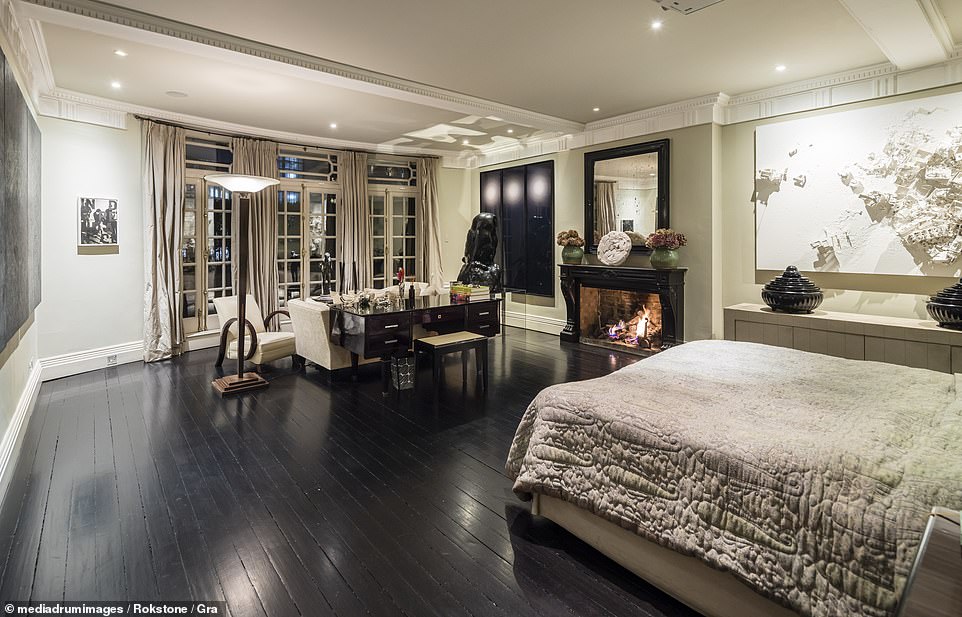 The central London property was once home to the best-selling romance novelist and socialite, Dame Barbara Cartland, during the Second World War. Her daughter, Countess Raine Spencer, made her public debut outside the property in 1947 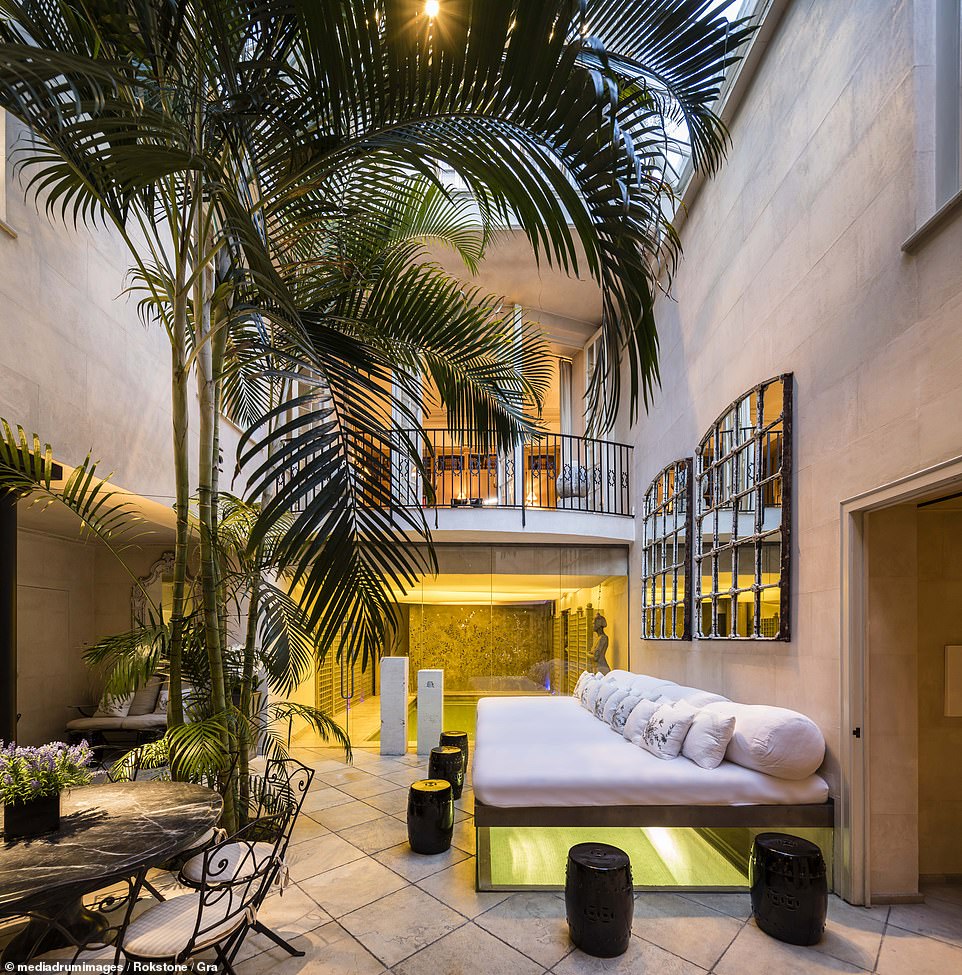 The sensitive modernisation of the six-bedroom townhouse included the creation of a wellness suite on the lower ground floor, where the owner can relax with a swim and sauna 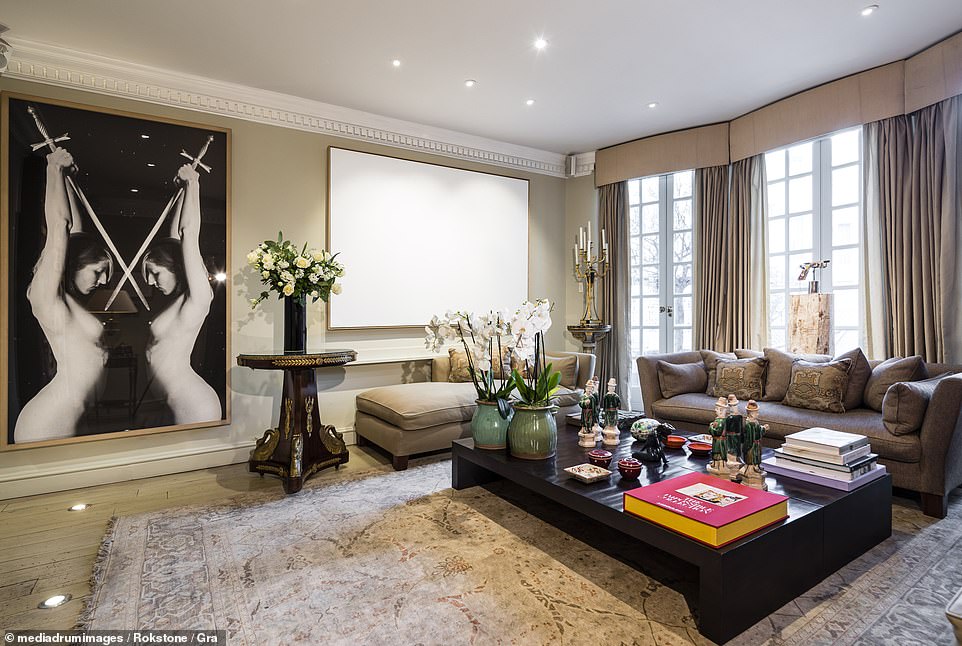 Countess Raine Spencer, who once owned the property, became Princess Diana’s step-mother in 1976, but was unpopular with the children and was reportedly dubbed ‘Acid Raine’. This lavish seating area boasts comfortable sofas and large paintings

Her daughter, Countess Raine Spencer, made her public debut outside the property in 1947 and would become a step-mother 29 years later to Princess Diana, who reportedly dubbed her ‘Acid Raine’.

The double-fronted mansion features a lower floor dedicated to wellness, complete with a pool, bar, and sauna, while the fifth and final floor gives immaculate views overlooking the rooftops of Mayfair.

Fine quality workmanship is evident in the stone detailing on the front of the house, with a stone architrave door case and elaborate French-inspired iron railings.

The walls and foundations hark back to 1740 and a wide Edwardian façade of 18 windows blends flawlessly with the home’s features of 21st century elegance.

The building was awarded listed status in 1975 and has just re-emerged onto the market with luxury estate agents Rokstone.

With three tube stops within equal distance of each other, it is in the heartland of prime central London, with Grosvenor Square a few minutes’ walk in one direction, and Park Lane and Hyde Park in the other. 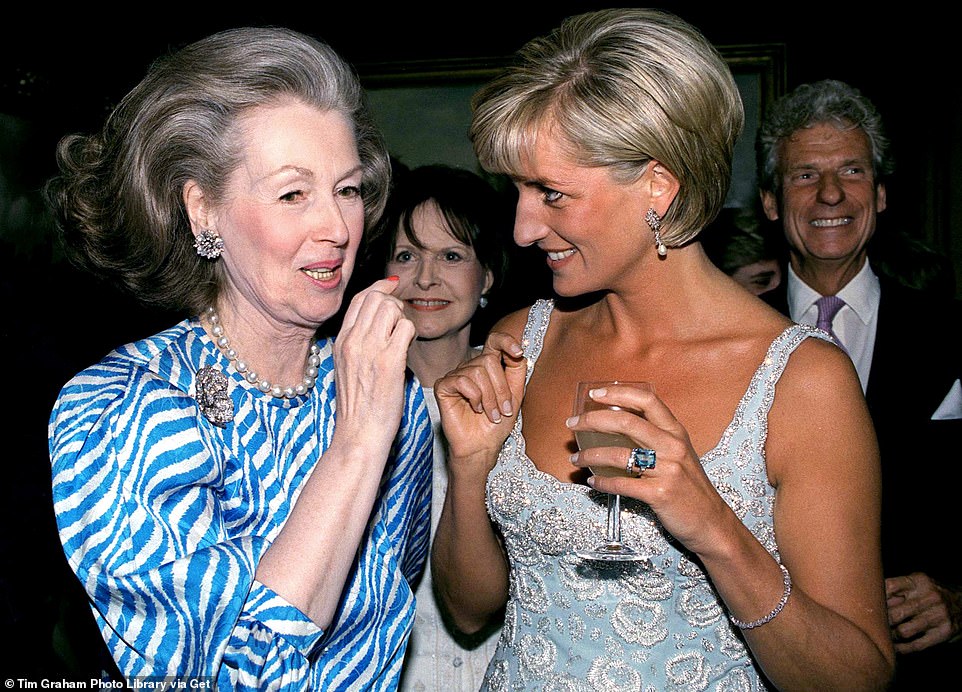 Countess Raine Spencer, left, step-mother to Princess Diana, right, who reportedly dubbed her ‘Acid Raine’, is a former resident of the property

Sir Alec Douglas-Home, who served as prime minister briefly between 1963 and 1964, also lived in the stunning property as a child in 1903.

Becky Fatemi, director of Rokstone Properties, says: ‘This is the quintessential Mayfair trophy home. Its vast size, grandiose design and fascinating back story make this property one of the most special in central London.

‘The collection of owners over the decades have retained the decorative hallmarks of the early twentieth century such as the Portland Stone doorway, fine iron railings and main timber staircase.

‘However, it has been elegantly modernised. The original property and newer additions work seamlessly together. From the outside it’s a piece of London heritage, while the interiors and layout offer a fantastic lifestyle worthy of both Dame Barbara and the twenty-first century Mayfair.’