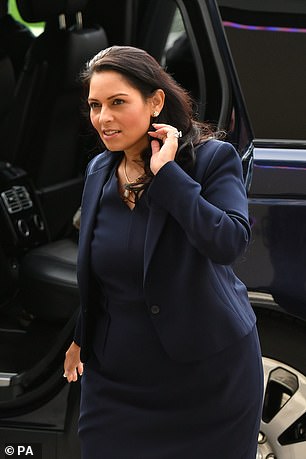 Priti Patel’s allies today angrily denied that she has been snubbing Home Office mandarin Sir Philip Rutnam – saying he failed to turn up for a meeting with the Cabinet minister yesterday.

Claims of a bitter feud have been threatening to throw the department into chaos, with Ms Patel facing a wave of hostile briefing after reports she was  trying to oust Sir Philip.

In the latest allegations, The Times said Ms Patel has been avoiding one-on-one meetings with the permanent secretary for more than a week, with the situation branded ‘utterly dysfunctional’.

However, a senior source told MailOnline that the claims were ‘total b******s’. A meeting is said to have been in the diary for yesterday that Sir Philip was due attend, but he ‘didn’t show’.

The source also alleged that Sir Philip ‘blocked’ the Home Office from issuing a statement that would have made clear ‘all meetings have taken place in the usual way’.

The civil servant made a rare public appearance at the National Police Chiefs’ Council and Association of Police and Crime Commissioners summit in Westminster yesterday.

Asked about the meeting claim and any reasons for Sir Philip’s alleged absence, a Home Office spokesman said: “The Home Secretary and Permanent Secretary are deeply concerned about the number of false allegations appearing in the media.

“They are focused on delivering on the Home Office’s hugely important agenda, which includes creating an immigration system that works for the UK, putting more police on the streets and keeping the public safe from terrorism.” 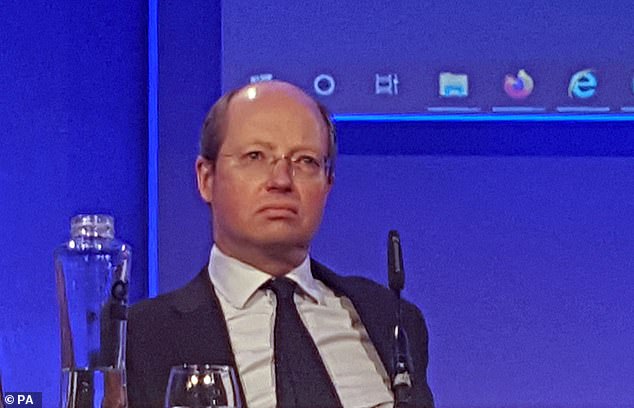 Sir Philip Rutnam, pictured at a police summit yesterday, is alleged to have refused to obey the order because of its timing 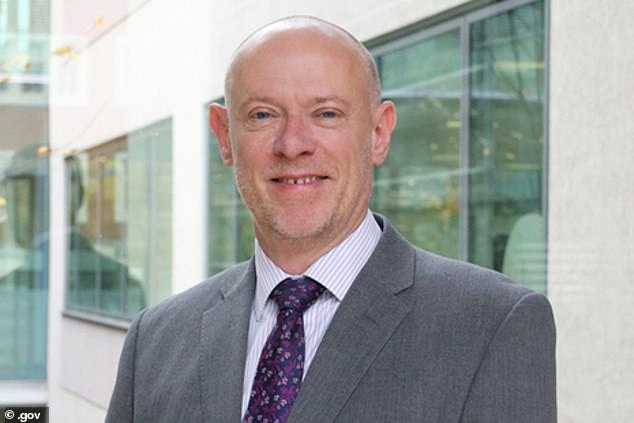 Ms Patel is said to have wanted to get rid of Home Office director of communications Andy Tighe, pictured above. Mr Tighe later retired from the role

The internal war threatened to escalate yesterday when reports emerged that Ms Patel told Sir Philip to get rid of a senior official on Christmas Eve, but he refused.

Claim: The Home Secretary bullied and belittled staff, creating an ‘atmosphere of fear’.

Claim: Ms Patel was alleged to have ‘dressed down’ staff in front of their colleagues, sent ‘aggressive’ emails in the middle of the night and asked ‘why is everyone so f***ing useless’ during previous ministerial roles.

Counter-claim: Allies of the Home Secretary dismissed the allegations as ‘malicious gossip’.

Claim: Ms Patel was cut out of security briefings by MI5 and officials were not sharing as much intelligence with her as they did with her predecessors.

Counter-claim: The Home Secretary was reportedly ‘livid’ at the suggestions. Security sources said reports they did not have a ‘strong working relationship are simply untrue’.

Counter-claim: The Home Office has not been drawn on any of the specific claims relating to relations between Ms Patel and Sir Philip. However, the department issued a joint statement saying ‘the Home Secretary and Permanent Secretary are deeply concerned about the number of false allegations appearing in the media’.

Ms Patel is said to have instructed Sir Philip to move director of communications Andy Tighe out of the department.

But Sir Philip allegedly declined to carry out the order due to the timing of the request with Mr Tighe, a former BBC journalist, later choosing to retire from the role.

The incident, reported by the Huff Post website, was dismissed by allies of Ms Patel as ‘a complete lie’.

However, the briefing underlines the apparent deterioration in the relationship between Ms Patel and Sir Philip.

Ms Patel has reportedly tried to oust Sir Philip from his position as the department’s top civil servant, while the Home Secretary has faced allegations of bullying and belittling staff – accusations her allies have rejected.

Sir Philip tried to make light of the Home Office infighting as he made a rare public appearance yesterday.

He remained tight-lipped on the alleged rift with Ms Patel but did prompt laughter during his address to the National Police Chiefs’ Council and Association of Police and Crime Commissioners summit in Westminster as he spoke about his increased public profile.

He said: ‘You probably have already heard a great deal more about permanent secretary’s in the last few days than you ever expected to.

‘But be reassured, I am not got to talk about that. I am going to talk about what really matters, which is cutting crime and building a law enforcement system that is more capable, more resilient and better placed for the future.’

It came after it was revealed that two senior civil servants have been forced out of the Home Office after clashing with Ms Patel.

A top official working in police oversight transferred to the Department of Transport and a member of the Home Secretary’s private office left their post in recent weeks, the Times reported.

Who is Sir Philip Rutnam, the Whitehall mandarin who Priti Patel ‘wants to get rid of?’

Sir Philip Rutnam is one of the most senior civil servants in Whitehall.

He joined the Home Office as permanent secretary – the top civil servant role in each department – in April 2017 having previously done the same job at the Department for Transport for five years.

However, his time at the Home Office has proved to be controversial because he was in post during the Windrush scandal.

He faced calls in November 2018 to resign over it with Tory London mayor candidate Shaun Bailey claiming the mandarin needed to step down to ‘restore confidence’ in the Home Office.

Amber Rudd resigned as home secretary in April 2018 because of the controversy which saw some migrants from Commonwealth countries who came to the UK from the late 1970s to 1973 being wrongly declared illegal immigrants.

An official report examining what went wrong found that Ms Rudd had been let down by her officials.

However, it stopped short of criticising Sir Philip.

The clashes between Ms Patel and Sir Philip are believed to have started last September after the latter allegedly tried to stand in the way of an announcement that more police would be allowed to carry tasers. A number of disagreements are then thought to have followed.

Ms Patel and Sir Philip released a joint statement in recent days to deny reports of a split at the top of the department.

Her allies have described her as a ‘demanding’ boss but not a bully.

The reports of feuding prompted the head of the Civil Service to order an end to media leaks in a directive to Government staff.

Cabinet Secretary Sir Mark Sedwill told all civil servants that advice they provide for ministers and ‘any debates’ around it should remain ‘private’.

Extraordinary briefings about relations between Ms Patel and Sir Philip have dominated recent weeks in Westminster.

The Home Secretary is said to be ‘livid’ over claims that she bullied staff and was cut out of security briefings by MI5 – allegations that emerged after she allegedly tried to have Sir Philip removed.

The Home Office issued a joint statement from the pair on Sunday but a Whitehall source said relations between them had completely broken down, adding: ‘Can they continue to work together? I just don’t know. No 10 is going to have to sort it out because it is completely dysfunctional.’

Boris Johnson, the Prime Minister, has given his support to Ms Patel with Downing Street stating he has ‘full confidence’ in his Home Secretary.

Asked to give the same endorsement to Sir Philip, the PM’s official spokesman ducked the question, replying: ‘The Prime Minister has full confidence in the civil service.’

Allies of Miss Patel are urging Sir Mark to move Sir Philip to a new role in Whitehall.

Number 10 has insisted that the appointment of permanent secretaries is ‘a matter for the Cabinet Secretary’.