The never-before-seen manuscript of Adolf Hitler’s opera, his sketch of a music hall and other items from his formative years will go on display in Austria this weekend.

They will be accompanied by the Vienna Academy of Fine Arts admissions book, which reveals he failed to gain a place in 1907 and 1908, and police documents showing the former dictator changed his address.

It is hoped that the objects, which will be displayed in Sankt Poelten, outside Vienna, as part of its exhibition ‘Young Hitler: the Formative Years of a Dictator’, will shed light on how the dictator’s past shaped his thinking.

These music notes were written by Hitler’s friend August Kubizek for their opera ‘Wieland der Schmied’ (Wieland the Smith). They will go on display in Sankt Poelten, outside Vienna 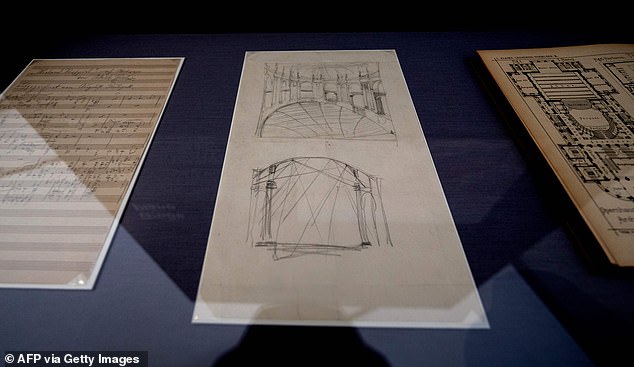 The pencil sketches of a music hall, shown above, were drawn by Hitler. They were kept by one of his few friends from his youth, August Kubizek, as mementos of his childhood 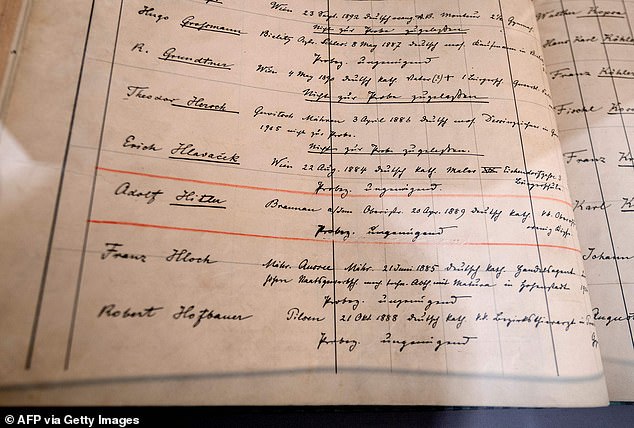 This line shows that Adolf Hitler was rejected from the Vienna Academy of Fine Arts in 1907 and 1908. He is said to have blamed this failure on others, according to the curators 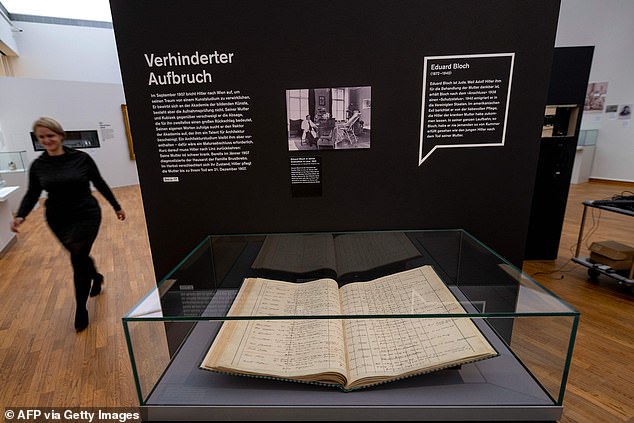 One of the key items at the exhibition is a page of piano notes, written by one of his few friends called August Kubizek, which formed the first page of their opera ‘Wieland der Schmied’ (Wieland the Smith).

Hitler started work on this after only a few months of piano lessons, said exhibition curator Christian Rapp, and this sheet is believed to be the last surviving piece.

It is said to have closely aped the work of the same name by Richard Wagner, one of Hitler’s favourite composers, and to have included re-enactments of German mythology.

The sheet is accompanied by a pencil sketch of a music hall, drawn by the dictator himself when he was around 20 years old.

The notes were initially kept by Kubizek as mementos of his own youth before he realised they might be of historical significance. 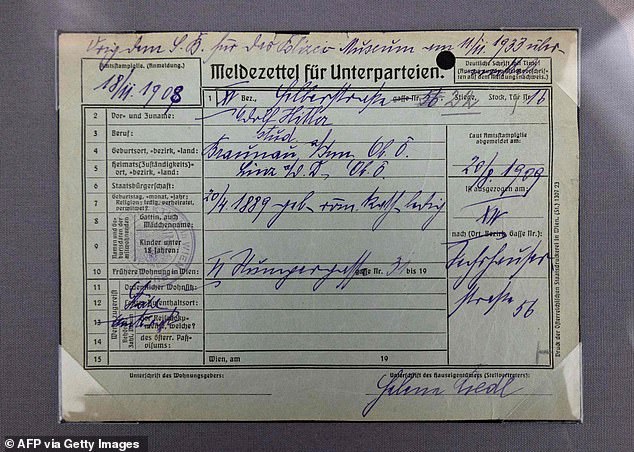 This is a police document from 1909 and signed by Hitler. It shows he changed his address 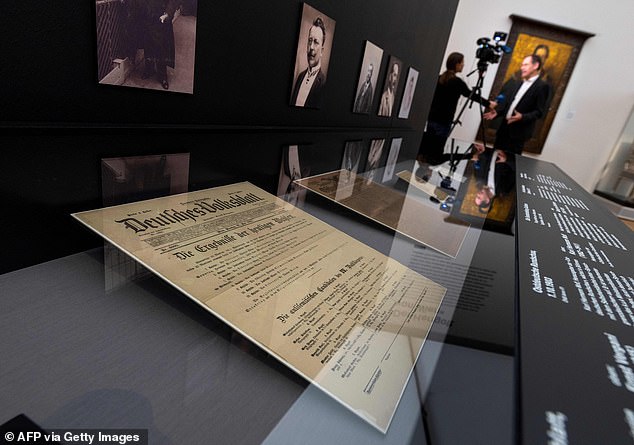 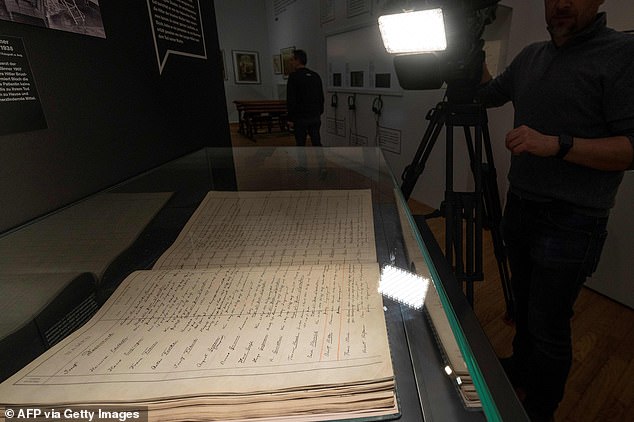 Hitler’s abilities rarely met his expectations, leading to him finding a scapegoat for his failures, Mr Rapp said.

‘Whenever something went wrong, it was always somebody else’s fault, not his own,’ he said.

‘The young Hitler was already “a bomb”, if you like. World War One provided the fuse and then it was ignited in Germany – but you can make out the ingredients during his time here in Austria.’

‘Even friends that knew him at a tender age testify to his intransigent and aggressive character,’ added co-curator Hannes Leidinger.

In addition to tracing Hitler’s personal history, the exhibition also seeks to explore the political and social context in Austria at the turn of the 20th century. 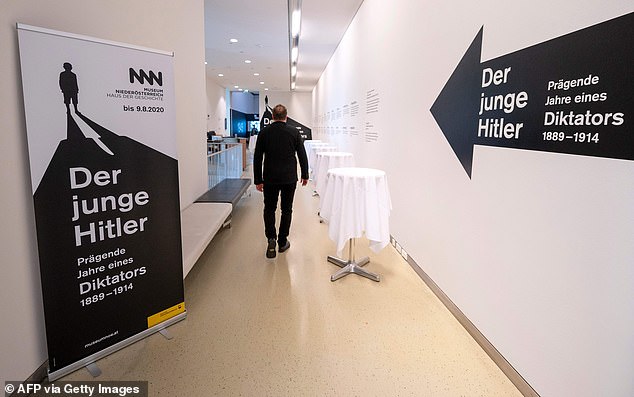 Visitors pictured arriving for the opening of the exhibition ‘Young Hitler: the Formative Years of a Dictator’ in Sankt Poelten, outside Vienna 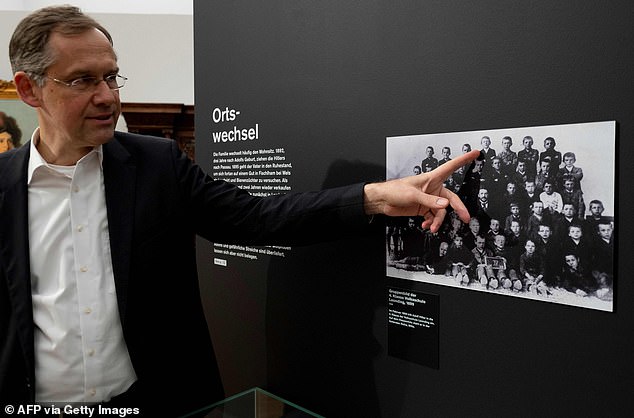 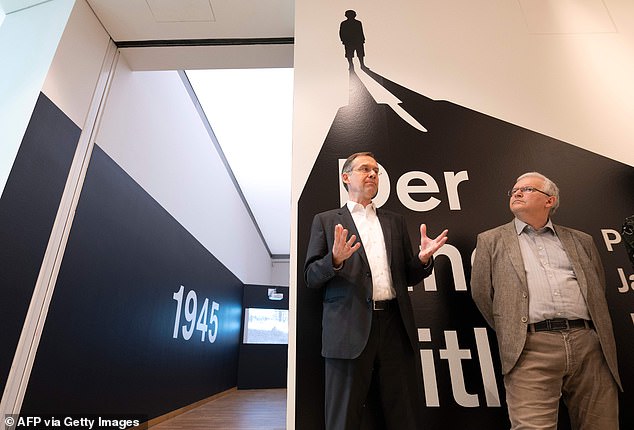 In particular, it tries to explain how many of the ideas that would gain such prominence in Nazi ideology – racism, anti-Semitism, militarism – had long since reached the mainstream of Austrian society, including among sections of the left.

Austria has had a complex relationship with its Nazi past.

For decades after World War Two, successive Austrian governments insisted the country was a victim of the Nazi regime and sought to downplay the complicity of many Austrians in the Nazis’ crimes.

The curators said they hoped the exhibition would help shed light on Hitler’s character, and also dispel the ideas that underpinned his genocidal ideology.

‘Ways of thinking take so long to become widespread in a society, and they take as long to be dismantled… we will have work at that for decades,’ Mr Rapp said.