When Bill Turnbull appeared beside Susanna Reid on breakfast television this week, he urged her: ‘Pinch me. Go on, pinch me. I can’t believe this is really happening.’

Those of us who know what the broadcaster has suffered in recent years were similarly incredulous.

Four years after stepping down from BBC Breakfast, Bill, now 64, had incurable prostate cancer diagnosed in November 2017. The ‘pernicious’ (his word) disease had spread to his spine, ribs, pelvis, hips and legs. He was riddled with it. 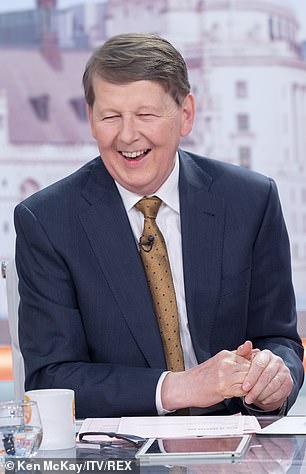 When Bill Turnbull appeared beside Susanna Reid (together left) on breakfast television this week, he urged her: ‘Pinch me. Go on, pinch me. I can’t believe this is really happening’

As he says: ‘One of the consultants said, “Bill, you do have a lot of disease.” I said, “I know. Thank you for pointing it out to me.”

After nine gruelling rounds of chemotherapy, the cancer is being kept in check with various treatments, including hormone therapy and radium injections to attack the tumours in the bones.

‘You get pain flares from that,’ he says. ‘If it hurts and goes away, I know what it is. It’s when you get a pain you don’t understand you can get scared.

‘But it’s been pretty effective for me over the past six months. My PSA (prostate-specific antigen — the protein doctors monitor for signs of the disease) has been coming down each month since the chemo, until last month when it didn’t come down at all. We’re waiting to see what happens.

‘It’s upsetting when the PSA level goes up. It’s like a jury coming back and saying, “No, you’re more ill than you thought you were”.

‘But all my blood markers are stable and when I had my last scan in August there had been no new tumour activity since April 2018, so we’ve got the brakes on for the time being.’ 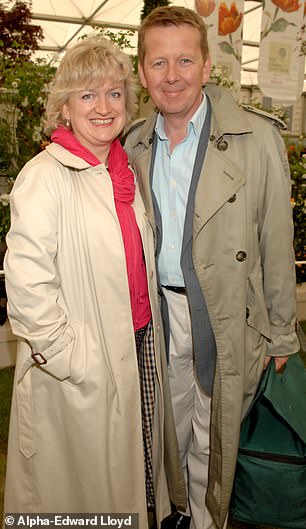 Bill is a warm-hearted, funny man who loves life and worships his wife Sarah (pictured together in 2007)

Bill is a warm-hearted, funny man who loves life and worships his wife Sarah and children Henry, 32, Will, 31, and Flora, 28. He was initially told he could expect to live for ten years.

Telling his family he had incurable cancer was, he says, ‘very hard’.

‘You’re inflicting pain on them. Personally I can deal with it but seeing them upset was horrible.’ He wells up and blames the hormone treatment for making him emotional.

‘Most of the time I’m fine, but every once in a while you have a dip,’ he says. ‘You have a really bad day and howl like a . . . I was going to say like a child, but it’s even worse than that.

He goes on: ‘If Sesi (his pet name for his wife) is there with me, it’s fine because I can lean on her. She helps me. I hate being on my own now. It gives you too much time to think and you can talk yourself into a dark place.

‘I sometimes think, what must it be like for people who don’t have anybody in their life who get diagnosed with cancer?

‘If you have somebody else with you, particularly someone who loves you truly, madly, deeply, with whom you’ve been for more than 30 years, you can laugh and cry with them. They distract you in many ways. If you have nobody, that’s pretty tough.’

Bill wells up and presses his palms together to try to compose himself. ‘I’m going to tear up now. I’m so sorry,’ he says, before pushing on.

‘There was something I read in a book about people who have overcome cancer — it said you need to have a moment of joy every day. So I go up to her and…’ Bill claps his hands, taps his feet on the floor and chants “moment of joy, moment of joy” to demonstrate.

‘We go through it together. It has brought us even closer than before. We laugh a lot —– most of the time. And work is also a distraction.’

Bill, who hosts a radio show on Classic FM, leapt at the chance to appear on ITV’s Good Morning Britain with his former BBC co-host Susanna.

‘Anything that gives you something else to think about is good. I do find it really dreary and exhausting to be conscious that the cancer is there every day, even if you’re feeling well. I’d like to wake up in the morning and go through a day where it didn’t always pop up and go, “hiya”.

‘Work helps. Classic FM has been like Doctor Radio when I’ve not been entirely well. Sometimes I’d wonder if I could do it, but Sesi would get me to the studio, my light would come on and I’d have to do it. I’d feel better at the end of the programme.

‘I like being at work and the telly thing with Susanna this week was just a treat. When she asked last year if I’d come back and present with her if Piers [Morgan] wasn’t there, it was a no-brainer. She’s an old friend. The idea of presenting together again — even once — was a laugh.

When he retired from BBC Breakfast four years ago, he was tired. He’d ‘had enough and wanted to leave it all behind’. Now every moment of life is a joy.

He says: ‘The things you thought were important aren’t really. You do see things more intensely and start to look at things you might not have done otherwise, because you realise there’s more to life than rushing from A to B to do C.

‘I don’t take life as seriously as I used to. I feel my foot is right off the gas now, which is a nice way to be. It’s a lighter way of looking at the world.

‘There’s a huge old beech tree in the garden. I look at it every day when I get up. There are no leaves on it so you can see hundreds and hundreds of tiny branches. The tree is different every day in the way it moves and how it looks. I take that in. I think, “How did that happen? The design of it is just so wonderful.” ’ He laughs again. 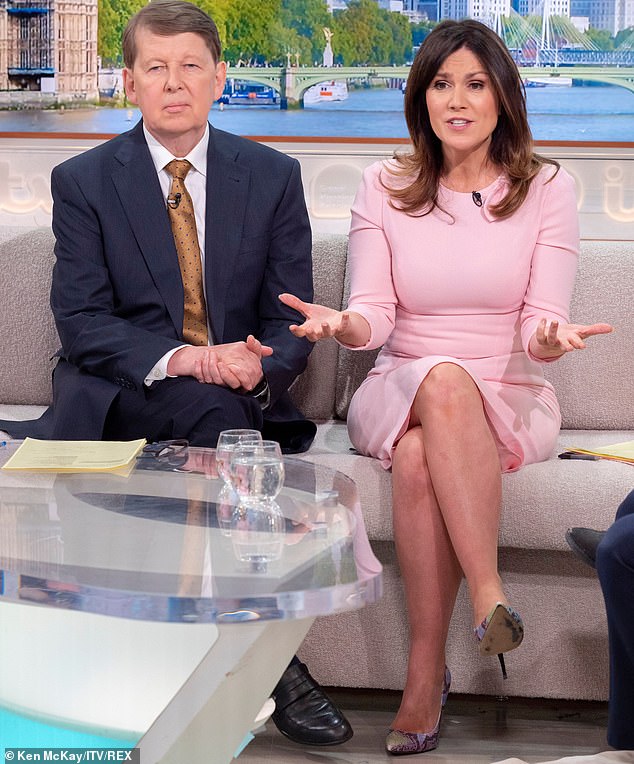 Bill, who hosts a radio show on Classic FM, leapt at the chance to appear on ITV’s Good Morning Britain with his former BBC co-host Susanna

Bill fervently wishes he’d had his PSA level checked earlier. When he had tests at 40 and 50, the results were fine, so he thought no more about it.

Life was busy, his career with BBC Breakfast was flourishing and time was short as he and the family divided their week between Salford, where he worked, and their home in Buckinghamshire.

He slowed down at 60, after retiring from BBC Breakfast and moving to the Suffolk coast, to spend the decades he believed stretched ahead of him with Sesi — and keep bees.

Eventually, in 2017, he had his PSA level tested. It shouldn’t have been higher than four. It was 583. He was told he could expect to live for ten years, an average life expectancy for advanced prostate cancer that was later extended to 18 years.

‘I walked out of the door and symbolically there was just blackness outside. I was on my own. I drove home, which I should never have done. I was thinking, “Did he say ten years? Did he say three or five years?”’

Bill also presented Songs Of Praise on TV. He says: ‘I’d been a practising Christian for as long as I can remember and tried to be good at it and used to go to church a lot. But when I was diagnosed, my faith disappeared like that.’ He clicks his fingers. ‘Pfff, like a balloon without any air.

‘I remember thinking a day or so later that I hadn’t gone home and prayed. I thought, “Oh, OK.”

‘One interesting thing about cancer is you meet people you might not otherwise have met. One guy introduced me to the Buddhist way of thinking.

‘The theory I’ve come across is, you look at a cloud in the sky and then that cloud disappears. What happens to that cloud? Did it die? No, it just changed into something else. That makes sense of the religious aspect for me.

‘I don’t think there’s a heaven and a hell. I think, like everything else, we go into the ground, our bodies get turned into something else and we move on.

‘I believe there is a loving, benign spirit that’s with us in some way in this world, in this galaxy, in this universe. You can call it whatever you want but I believe it’s with us all the time and you can tap into it. That’s a great thing.’ He smiles.

‘I’m still learning, so in some ways I am starting [with religion] all over again.’

Bill has read a lot since his incurable cancer was diagnosed. ‘The first few days and weeks was a very, very, dark period,’ he says.

‘Trying to get your head around the science of what is happening to you takes time.

‘I read a fair number of books and one was called Radical Remission. It showed there are nine common factors to everybody who gets better: radically changing your diet, taking control of your health, following your intuition, taking herbs and supplements, releasing suppressed emotions, increasing positive emotion, embracing social support, deepening your spiritual connection and having a strong reason for living.

‘I read it and somehow jumped through a window of fear. Up to that point I’d thought, “I’ve got cancer. It’s going to kill me because it’s incurable. Eventually it’s going to get me. I’ve only got this amount of time left.” It wasn’t totally bleak but it was always there in the back of my mind.

‘Then I thought, “So what, we all die. Some of us die sooner than others but actually I’m not going to die that soon, so what am I worrying about?” Once I had overcome that fear, everything was much easier.

‘You have to have hope. When you read stories of other people who’ve overcome their illness and find out some ways you might be able to help yourself, there is some light.’

Now, Bill practices yoga, tries to meditate, follows a largely plant-based diet and has stopped drinking alcohol. He looks as fit as a flea.

‘Sesi and I made a conscious decision early on that we wouldn’t treat this as an incurable disease. We treat it as a long-term disease and the ambition is to die with it, not die of it.

‘People say, “I’m going to do battle with my cancer”, but it’s a part of us. These are my cells. They’re me. They’re in my body.

‘There was a Japanese business executive who got really, really bad cancer and developed a relationship with it where he’d talk to his cancer every day and say, “How are you, my cancer?”

‘For one reason or another, he got better. I’ve probably got too many tumours to talk to individually but I do think, “We’re going to be all right. Let’s see. However it ends, it ends.” So most of the time I feel relaxed about that idea.

‘Who knows? I’m not thinking I need to make my [funeral] arrangements because I don’t — although I do hear music and think I’ll put it in the file for the day I do.

Bill has donated his fee for this article to the Royal Marsden Cancer Charity. www.royalmarsden.org