‘He is here in South Carolina for one reason – to disrupt the Democratic primary – that’s why he’s here. He hopes he can get a little media attention taken away from the Democratic candidates,’ Sanders said at a rally in Columbia, South Carolina. ‘How petty, how pathetic is that?’

The 2020 hopeful blasted Trump saying, ‘Do you job.’ ‘Don’t worry about the Democratic primary because we’re going to beat you,’ the Vermont senator taunted. 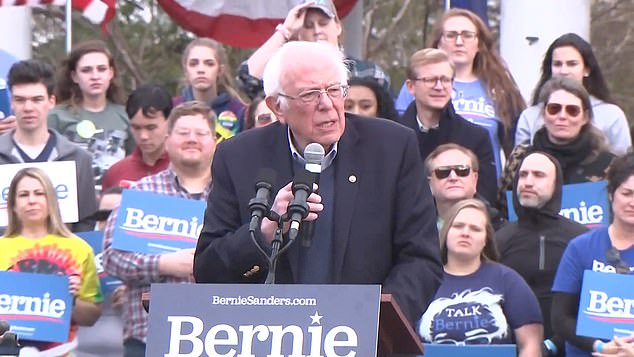 Bernie Sanders tore into President Trump for the president’s decision to hold a campaign rally in Charleston, South Carolina Friday night – instead of staying in Washington amid the coronavirus crisis 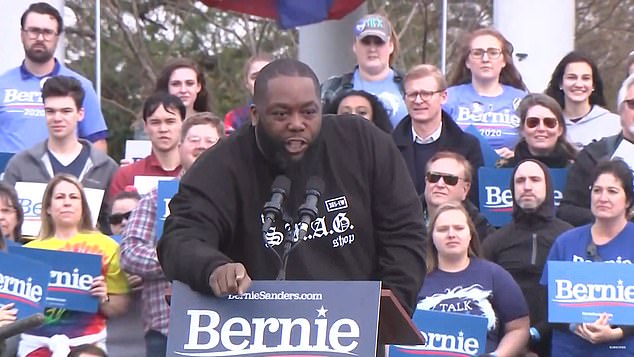 Sanders was holding his final rally in South Carolina before moving on to other states, and on the eve of the state’s Democratic primary. While the Republican primary was cancelled thanks to Trump being an incumbent, the president decided to still hold a rally with supporters in the state.

At the Columbia rally, held at Finlay Park, located a short distance from the University of South Carolina campus, the Sanders campaign trotted out a number of opening performers and speakers including the Austin-based rap duo Blackillac, actor Danny Glover – who also supported Sanders’ 2016 run – and Killer Mike.

The rapper, and Sanders campaign surrogate – who also has supported Sanders since his 2016 run – explained that a progressive party needs to make progress.

Killer Mike specifically tailored his message to a certain voting bloc that Sanders will need if he want to perform well in South Carolina.

The Columbia rally marked Sanders’ last appearance in South Carolina, as he plans to campaign in Virginia – one of 14 ‘Super Tuesday’ states – Saturday while Palmetto State voters head to the polls.

As results are coming in Saturday night, Sanders will be holding a rally in Virginia, Beach, Virginia.

His rival, former Vice President Joe Biden, is staying in South Carolina, as polls show he’s on track to win the state.

The most recent South Carolina poll, which dropped Friday, showed Biden 9 points ahead of Sanders. 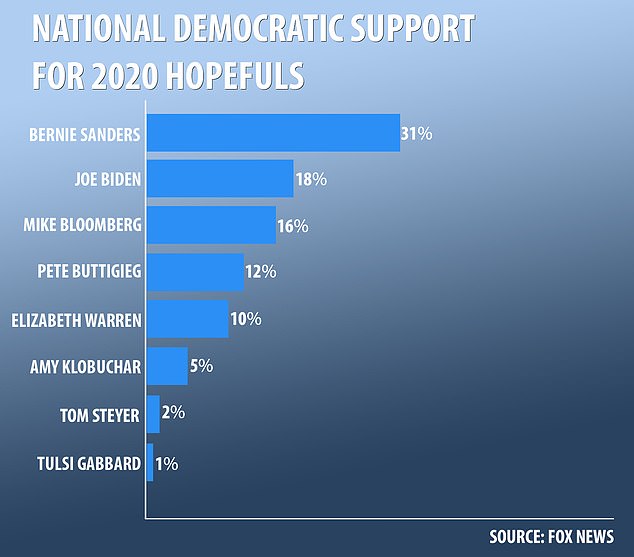 The Data for Progress survey showed 34 per cent of South Carolina voters choosing Biden, while 25 per cent said they supported Sanders. Tom Steyer and Pete Buttigieg were tied for third with 13 per cent each. Elizabeth Warren followed with 7 per cent support. Amy Klobuchar received 5 per cent and Tulsi Gabbard got 3 per cent, in the new poll.

A Fox News Channel poll that was released Friday had Sanders 13 points ahead of the Democratic pack.

Thirty-one per cent of Democratic voters nationally said they support Sanders, while 18 per cent chose Biden.

In fourth place nationally was Buttigieg with 12 per cent support. Warren got fifth place with 10 per cent, while Klobuchar got 5 per cent, Steyer got 2 per cent and Gabbard got the support of just 1 per cent of Democratic primary voters, the Fox News survey said.