Abandoned farmland could play an important role in partially offsetting rising temperatures across Europe, according to a new study.

A team of scientists, led by Francesco Cherubini of the Norwegian University of Science and Technology, found that in Western Europe the ground temperature on abandoned farmland could be up to 1.8 degrees Farenheit cooler than it had been with active farms.

The cooling was attributed to a variety of factors, including new tree growth, which helped absorb greenhouse gases like CO2 and helped deflect sunlight.

A team of researchers from the Norwegian University of Science and Technology found that temperatures on abandoned farmland in western Europe could be as much as 1.8 degrees Farenheit cooler than it had been when the farms were active

There was also greater evapotranspiration, the process through which water evaporates from wetlands, tree leaves, and other moisture sources, decreasing the amount of solar energy absorbed by the ground.

‘The message is quite clear: Abandoned cropland—or land cover change more generally—and its role in regional climate can help to us adapt and mitigate the effects of climate change,’ Cherubini told Phys.org.

‘And by improving agricultural systems, we can free up land for multiple uses.’

They created a computer program that modeled the changes in climate over that same time, based on real atmospheric observations.

The team then compared the model’s results with an array of different regional climate studies to ensure their numbers were accurate. 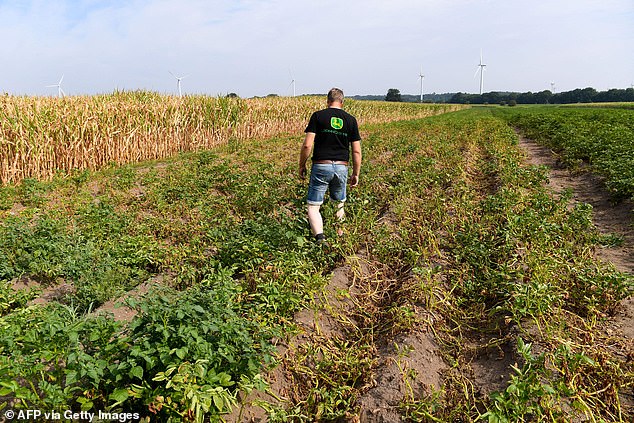 The team said a variety of factors contributed to the cooling phenomenon, including more trees to absorb CO2 and deflect sunlight, meaning less solar energy was absorbed by the ground 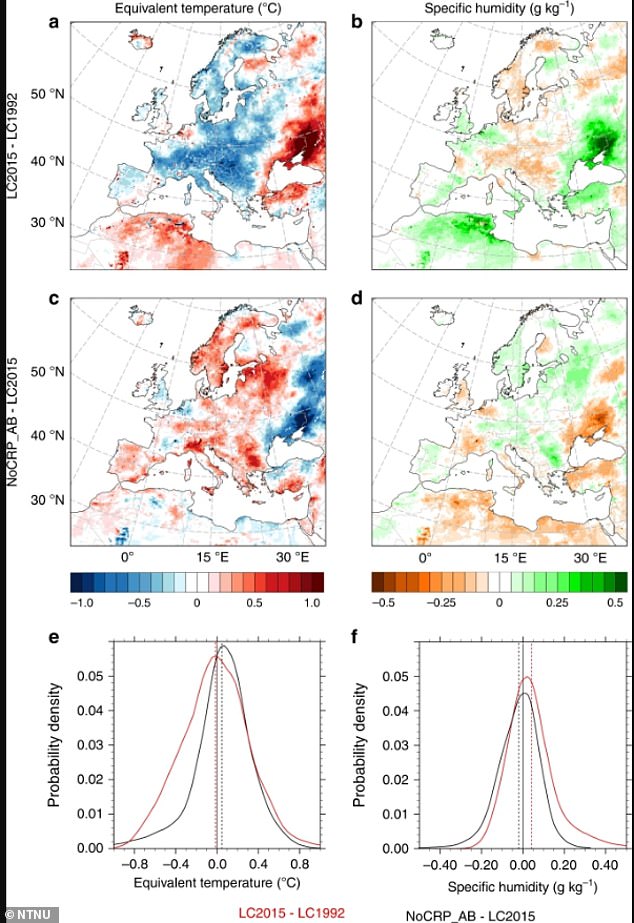 The team found the same cooling phenomenon didn’t occur in Eastern Europe, where abandoned farmland actually became hotter, which they attribute to a drier overall climate, which became even hotter without regular irrigation and watering

In all, they found more than 25 million hectares of agricultural land had been abandoned across Europe during the 24 years they had data for, roughly the same size as Switzerland.

The main causes of land abandonment were socioeconomic, according to the team.

Rewilding aims to return land to a more natural state – by allowing nature to take its course.

Activists and plans call for rewilding to be encouraged in order to save essential areas and species.

Their site reads: ‘We can give it a helping hand by creating the right conditions – by removing dykes and dams to free up rivers, by stopping active management of wildlife populations, by allowing natural forest regeneration, and by reintroducing species that have disappeared as a result of man’s actions.

‘Then we should step back and let nature manage itself.’

Plans include introducing long-gone or valuable keystone species to a region and preserving natural order.

‘People might have gotten tired of living in the countryside, or they don’t want to work on their farm anymore,’ he said.

‘We saw this especially in the former Soviet Union after the fall of the (Berlin) Wall, because farmers were exposed to agricultural trade and international markets.’

Other studies have focused on tree growth, which helps take CO2 out out of the air, but Cherubini and his team wanted to focus on a more holistic set of metrics, including water evaporation rates, humidity levels, and soil moisture.

The team attributed this to a dryer climate, which meant less water was available for evaporation and more energy from the sun was absorbed directly by the land, raising surface temperatures.

This suggests that different land management strategies for different regions would be called for.

‘The ambition here is to have land management planning, where you can tackle the global challenges of carbon storage through land management, combined with strategies that have local cooling benefits,’ he said.