A woman who shed half her body weight after being diagnosed with multiple sclerosis has revealed how she has managed to keep the weight off for seven years.

Natasha Bunby, 38, who lives in West Sussex with her husband Marc, 51, and sons Deon, 18, and London, 12, signed up to Slimming World in 2011 after being diagnosed with the condition, which has left her unable to walk.

Within 18 months, Natasha, then a size 28, had slimmed from 21st 7lbs to 10st 6lbs and has maintained that weight ever since.

The mother-of-two now helps others on their weight loss journey and has been named Slimming World’s Top Target Consultant of the year. 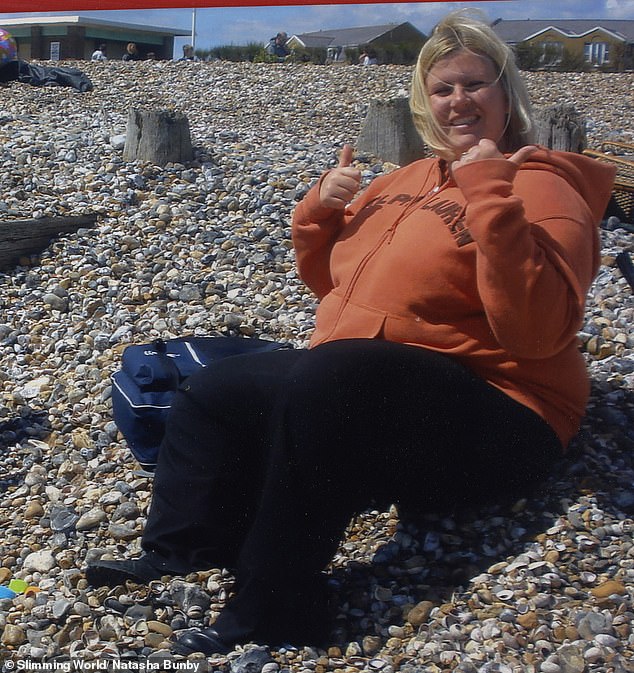 Natasha Bunby, who lives in West Sussex with her husband Marc, 51, signed up to Slimming World in 2011. Within 18 months, Natasha, then a size 28, had slimmed from 21st 7lbs to 10st 6lbs and has maintained that weight ever since. Pictured, Natasha before her weight loss 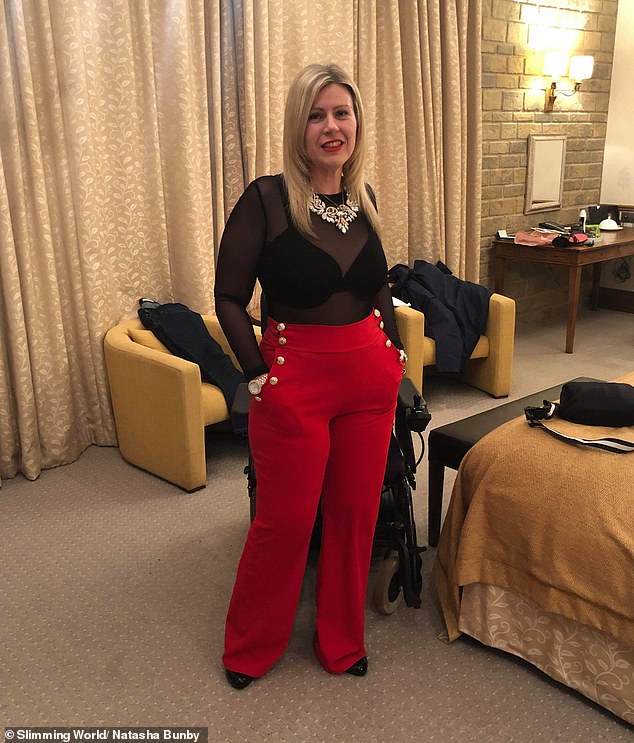 The mother-of-two now helps others on their weight loss journey and has been named Slimming World’s Top Target Consultant of the year. Pictured, Natasha after her weight loss

Natasha, now a UK size 12, told how she began comfort eating after her best friend died at the age of 18.

However she knew something had to change after she was diagnosed with MS and started using a wheelchair.

She said: ‘I’d had problems with my legs since my teens, but doctors put it down to the trauma of losing my friend. Some years later, I woke up one night and lost all function and feeling from the waist down.

‘I was taken to hospital and diagnosed with secondary progressive multiple sclerosis and hospitalised for six weeks.

‘During that time my mum took me, in my wheelchair, to a park at the side of the hospital with my two children. There was a slope that led down to the park and my mum lost control of the wheelchair.

‘I ended up stuck in a bush – and because I was too heavy for my mum to manoeuvre the chair – she had to ask a passer-by for help. 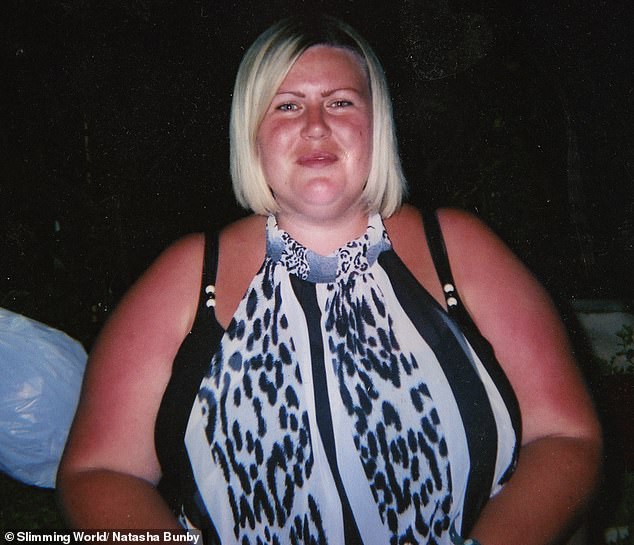 Natasha (pictured before) told how she began comfort eating after her best friend died at the age of 18. Eventually she tipped the scales at 21st 7lbs and wore a size 28 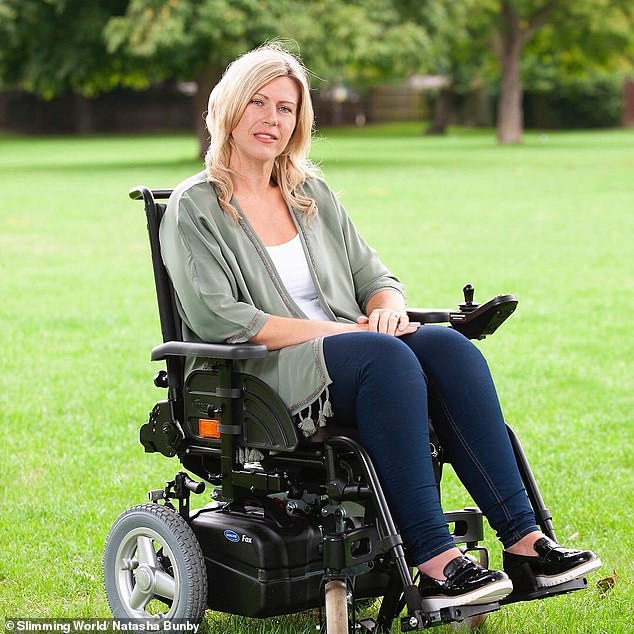 Natasha, pictured today, knew something had to change after she was diagnosed with MS and started using a wheelchair, saying she wanted to do all she could to improve her health

‘The experience itself was embarrassing enough. Then when my oldest son Deon asked me how we’d ever go out as a family if I was too heavy to be pushed in a wheelchair, it broke my heart.

‘I knew I had to do something about my weight as I wanted to do all I could to help myself with my health.’

Natasha, who now needs a wheelchair to move, decided to join her local Slimming World group, after a leaflet came through her door in March 2011.

She continued: ‘Of course I was nervous about joining the group, but I was overwhelmed by the kindness from everyone in the room. At the time I was a size 28 and spent most of the time just wanting to hide.

‘However, I knew deep down that I also wanted to do something for myself and take back some control.

‘I was a bit of a “jar girl” before so cooking from scratch was a real eye-opener for me. It’s just a way of life now and I couldn’t imagine living any differently.’

Within 18 months, Natasha had slimmed from 21st 7lbs to a healthy 10st 6lbs and was feeling much more positive about her weight. 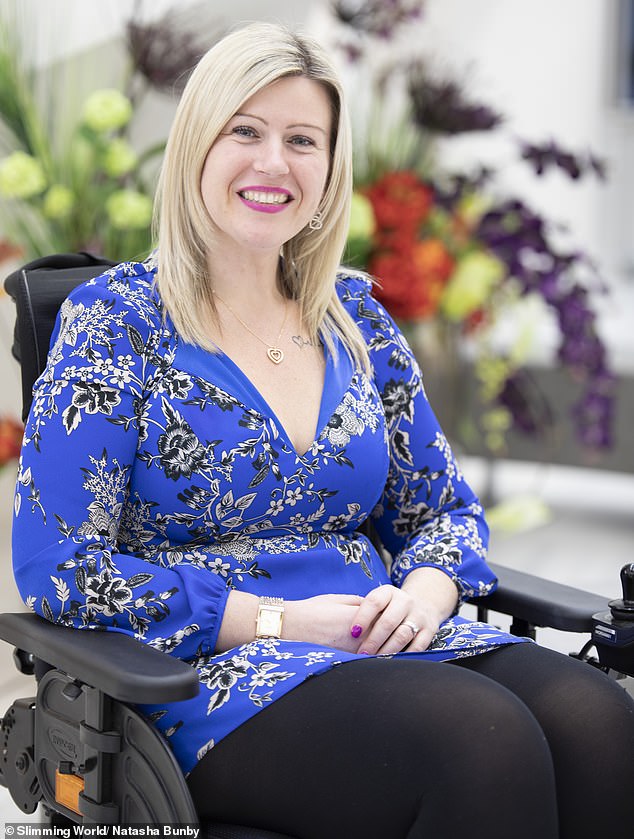 As well as being a Slimming World Consultant, Natasha, pictured today, models for Zebedee Management, an agency working for people with disabilities and visual differences

Lunch: Lunch from a bakery along with a cake and a packet of crisps

Dinner: Microwave meal or something made with a jarred sauce

Dinner: Homemade roast dinner, homemade Slimming World-style burger and chips or a curry made from scratch

She continued: ‘As time went on, I realised that I would really love to become a Slimming World Consultant myself and inspire other people who perhaps thought they would never be able to lose weight.

‘I have lots of support from my family, who help me set up my groups, and have two wonderful venues which are fully wheelchair accessible. I absolutely love being a Consultant and seeing members change before my eyes. It’s a wonderful feeling – in fact it’s the best job in the world.’

Natasha admits that she was very inactive before joining Slimming World, however she’s found several ways to stay fit since her weight loss.

‘I don’t let anything hold me back – I attend a gym which is fully wheelchair accessible and use the upper body machines to keep myself feeling fit,’ she said. ‘Members of my groups aren’t afraid to talk about activity just because I’m in a wheelchair – we know that getting active means something different for everyone.’

As well as being a Slimming World Consultant, Natasha also models for Zebedee Management, an agency working for people with disabilities and visual differences.

Natasha added: ‘I feel so proud to be named Slimming World’s Top Target Consultant for 2020. It’s not often that you see someone like me in newspapers or magazines so I’m really passionate about seeing people who don’t fit the usual mould in the mainstream media, I think it’s very important.

‘My multiple sclerosis will never be the most interesting thing about me, but it’s also not going away so I’m going to embrace it and use my experiences in the most positive way I can.

‘One day my illness will win the battle and when that day comes, I want my friends and family to say, ‘She loved the life she lived and she did her best.’ Giving up isn’t an option for me – and I’ll always help others along the way as best I can.’