Thousands of riot police and paramilitaries patrolled the affected northeast fringes of the Indian capital of 20 million people, preventing any major eruptions.

The unrest is the latest bout of violence over Prime Minister Narendra Modi’s citizenship law, which triggered months of demonstrations that turned deadly in December.

‘All of them had gunshot injuries,’ Kumar said. 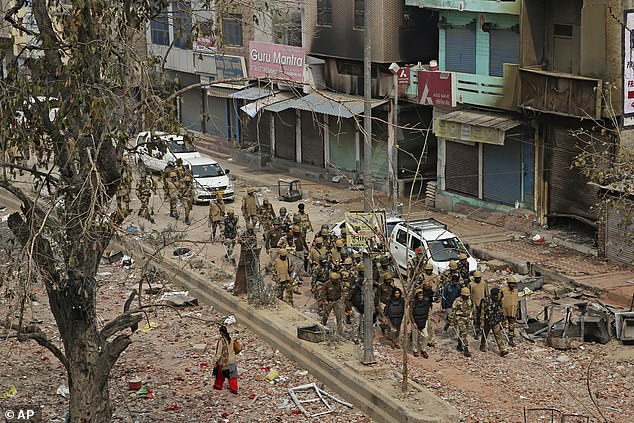 Charred remains of dozens of cars, burnt in Tuesday’s violence, are seen parked inside a workshop in New Delhi today 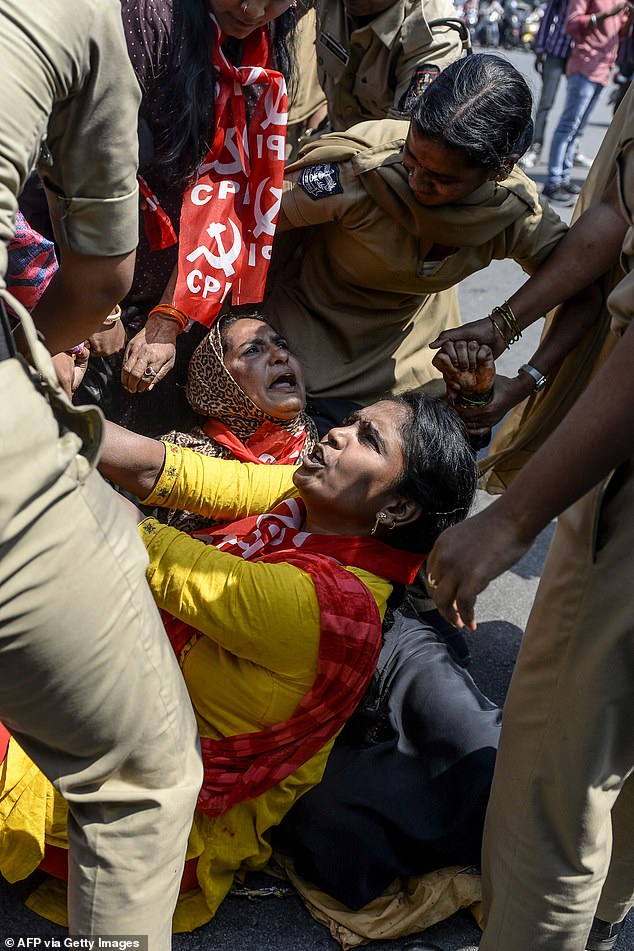 Police personnel detain members of Communist Party of India (CPI) as they demand the resignation of Union Home Minister Amit Shah for the responsibility about the violence in Delhi, during a protest in Hyderabad today

The new fatalities – up from 27 on Wednesday – were all from the violence on Monday and Tuesday when mobs of Hindus and Muslims fought running battles.

Groups armed with swords and guns set fire to thousands of properties and vehicles. 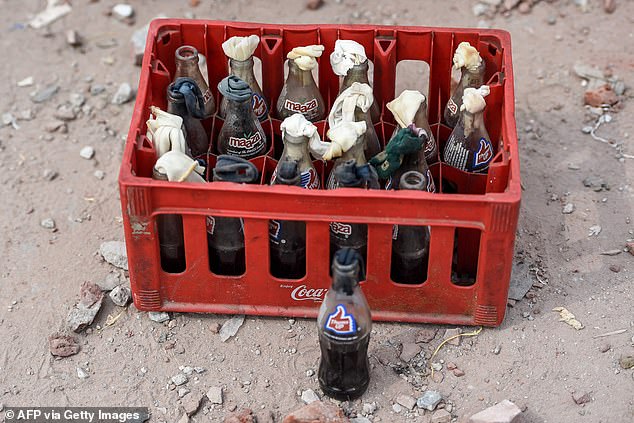 A crate of Molotov cocktails is seen outside the house of an Aam Admin Party (AAP) councillor at the riot-hit area following clashes between people supporting and opposing a cententious amendment to Indias citizenship law, in New Delhi today 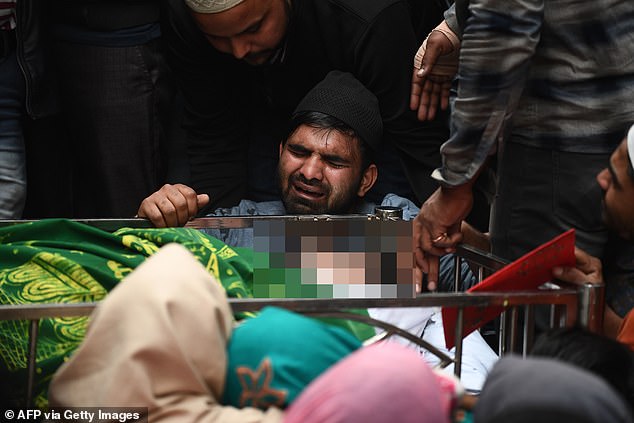 The brother (centre) of Mohammad MudAsir, 31, who died in the recent sectarian riots in India’s capital over Prime Minister Narendra Modi’s citizenship law, reacts during his brother’s funeral in New Delhi today 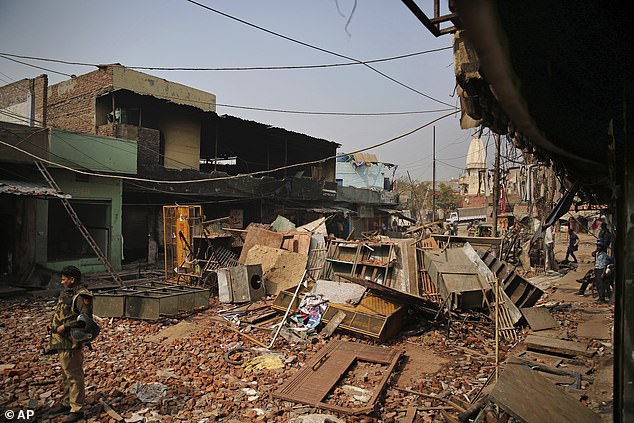 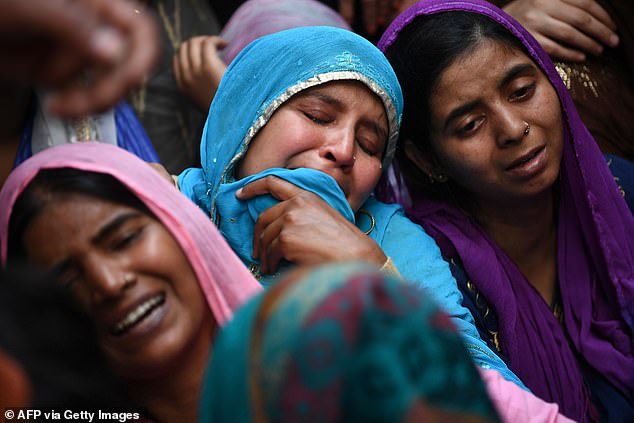 More than 200 people were also injured.

According to a list from the GTB hospital, the victims are a roughly even mix of Hindus and Muslims, based on their names. 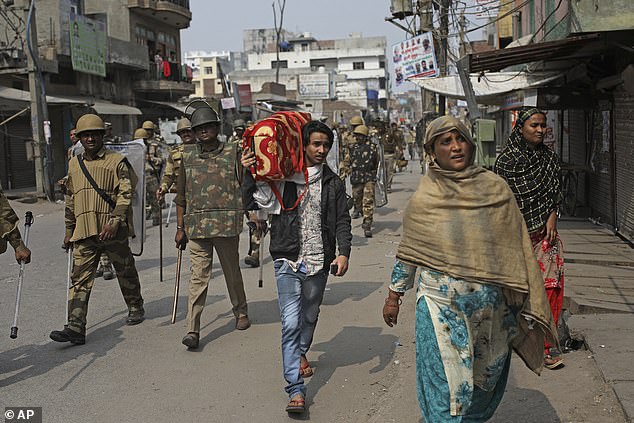 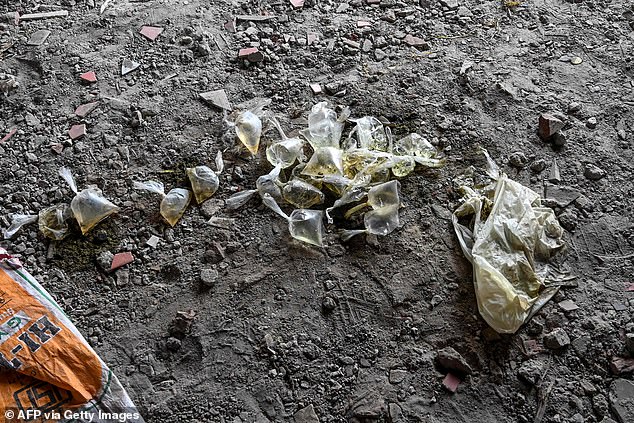 Plactic bags filled with acid are seen in the premises of Aam Admin Party (AAP) councillor Tahir Hussain at the riot-hit area following clashes between people supporting and opposing a contentious amendment to India’s citizenship law, in New Delhi today 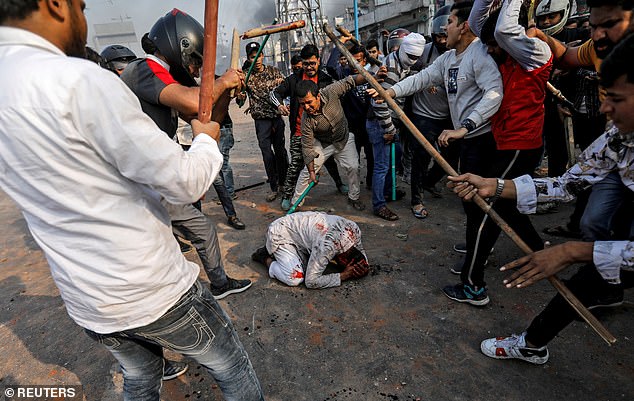 A group of men chanting pro-Hindu slogans, beat Mohammad Zubair, 37, who is Muslim, during protests sparked by a new citizenship law in New Delhi, India on Monday

‘In last three days 230 calls were received by the department from the region that included major incidents of arson,’ Garg said.

In December at least 30 people were killed, mostly in police action in the northern state of Uttar Pradesh, home to a significant Muslim population, after the citizenship law was passed.

Many of India’s 200 million Muslims fear the citizenship law – combined with a mooted citizens’ register – will leave them stateless or even sent to detention camps. 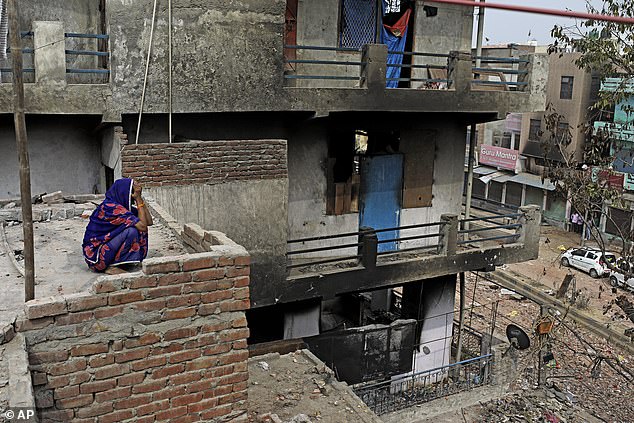 An Indian woman holds her head as she looks at burnt buildings and vandalized street after Tuesday’s violence in New Delhi, India today 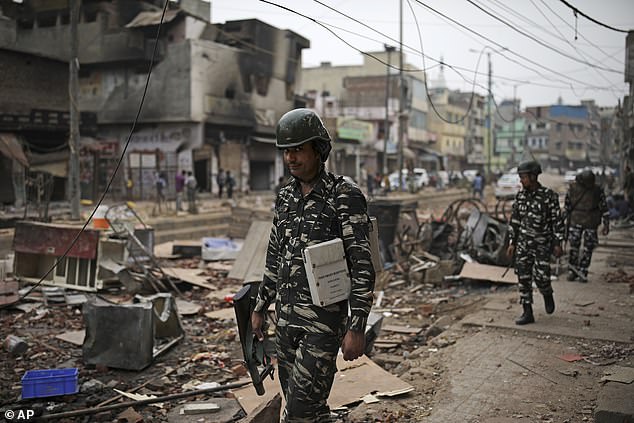 They and critics see Modi’s right-wing ruling party, which is linked to once-banned militaristic Hindu group RSS, as wanting to turn officially secular India into a Hindu nation.

His party has denied the allegations but in recent weeks BJP politicians, including in an ugly recent campaign for Delhi elections, have called the demonstrators ‘anti-nationals’ and ‘jihadists’.

One, Parvesh Verma, said protesters ‘could enter houses and rape and kill your sisters’, while another, Anurag Thakur, encouraged a crowd to chant ‘gun down traitors’. 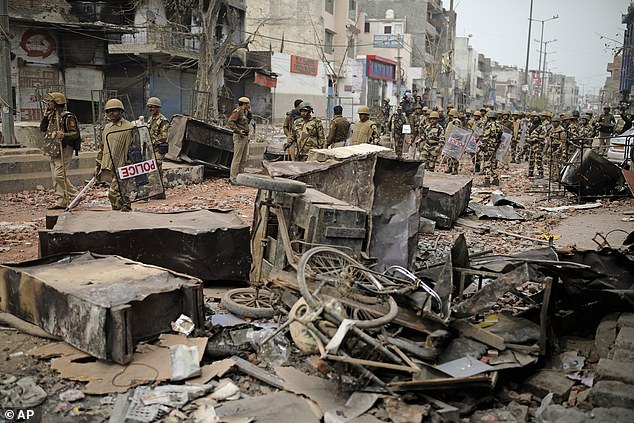 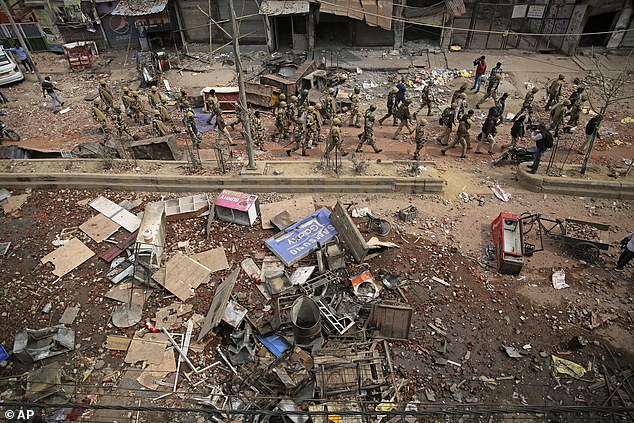 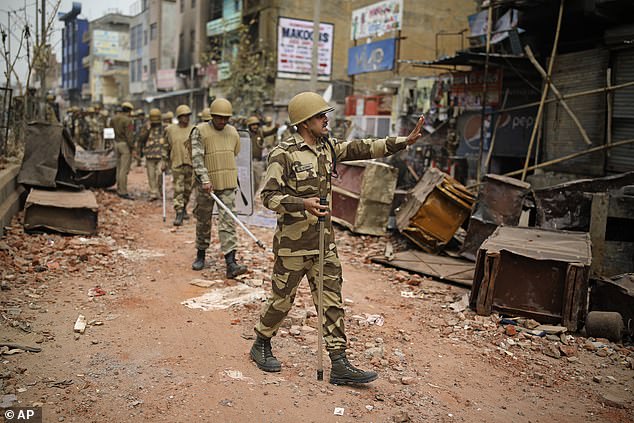 An Indian paramilitary soldier asks residents to stay indoors as they patrol a street vandalized in Tuesday’s violence in New Delhi, India today

A call on Sunday by another BJP politician, Kapil Mishra, for ‘Hindus’ to clear a northeastern Delhi sit-in protest is being seen as the spark for the current unrest.

On Wednesday a Delhi High Court judge, Justice S. Muralidhar, sharply criticised the police and called on them to investigate BJP politicians for inciting violence.

Muralidhar was transferred to another state court in a late-night order, prompting a social media storm. Law Minister Ravi Shankar Prasad insisted it was a ‘routine transfer’. 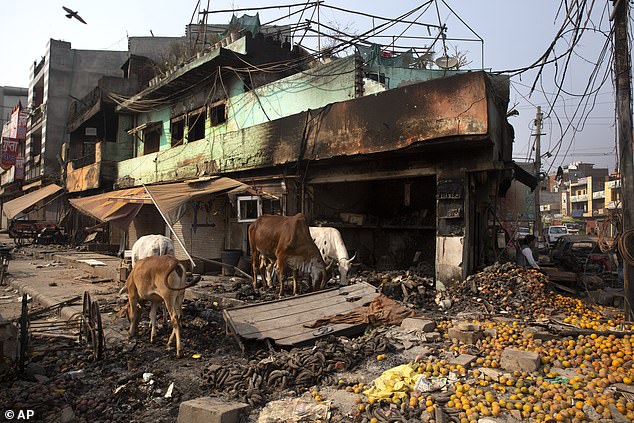 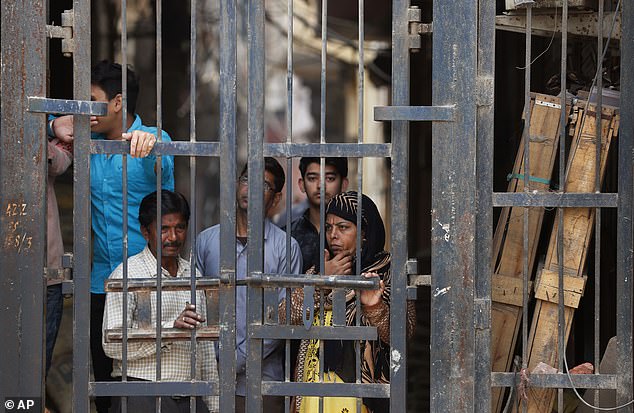 Residents look from behind a closed iron gate of their alley in Karaval Nagar following Tuesday’s violence in New Delhi, India today 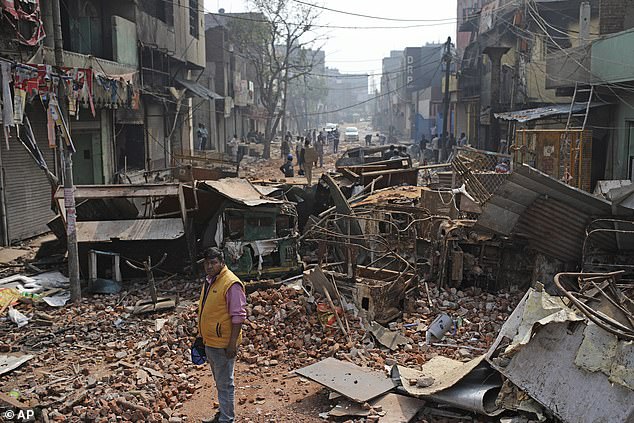 A Delhi municipal worker stands next to heaps of the remains of vehicles, steel cupboards and other materials on a street vandalized in Tuesday’s violence in New Delhi today

On Wednesday the US Commission on International Religious Freedom, which advises Washington but does not set policy, voiced ‘grave concern’ about the violence as President Donald Trump was visiting.

Trump, asked at a news conference in the capital about the violence, said the issue was ‘up to India’ and praised Modi’s ‘incredible’ statements on religious freedom.