Mike Pence moved Thursday to project calm in the role of chief coordinator of the government’s response to the coronavirus, chairing the first meeting of the White House’s taskforce on the virus – which has just four doctors, one of whom was absent.

The taskforce held its first meeting at the Department of Health and Human Services, hours after it emerged that the Trump administration had ordered its own health experts not to speak in public without permission from Pence’s staff.

Pence only held the meeting after he addressed the CPAC conservative conference and just before Wall Street closed with the worst stock mark sell-off since 2008.

In Californiia, 8,400 people are now being monitored for signs of the virus, while in Florida the governor refused to say if anyone was being tested.

Those on the taskforce include Larry Kudlow, the Trump economic adviser who earlier in the week said the U.S. was ‘airtight’ from the virus, and Ken Cuccinelli, acting deputy Homeland Security secretary, who had tweeted a complaint that he could not find a map of the coronavirus’ spread.

The vice president named a seasoned medical professional, Debbie Birx, as his chief adviser on the response and said Trump had ‘tasked us to take every step necessary to protect the health of the American people.’But there was no sign of her at the taskforce meeting at the Department of Health and Human Services.

The other doctors on the taskforce are Anthony Fauci, Head of the National Institute of Allergy and Infectious Diseases; Jerome Adams, the Surgeon General; and Robert Redfield, director of the CDC.

SCROLL DOWN FOR VIDEO 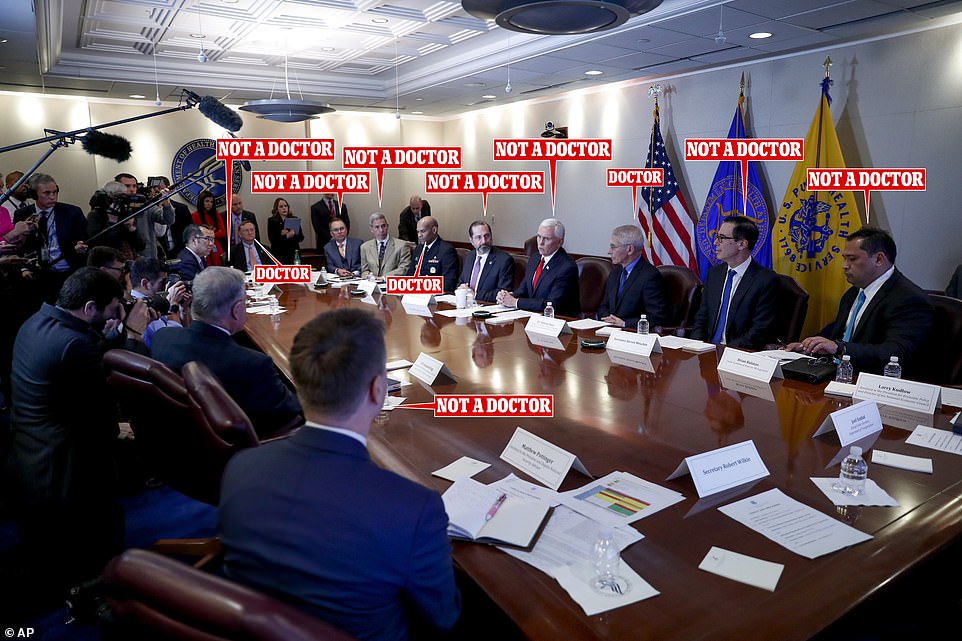 One doctor in the picture: Surgeon General Jerome Adams  (left) is on the coronavirus taskforce. Other members include (right) Joel Szabat, the acting undersecretary of state for policy at the Department of Transportation 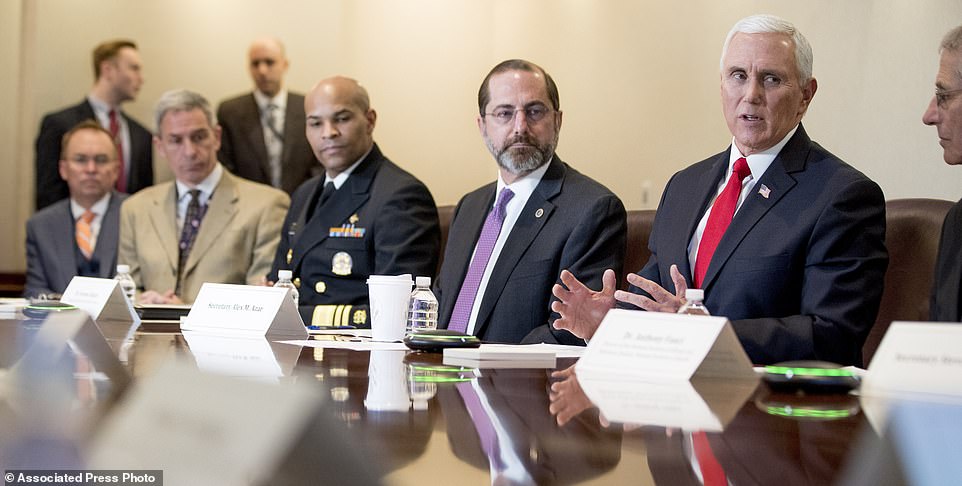 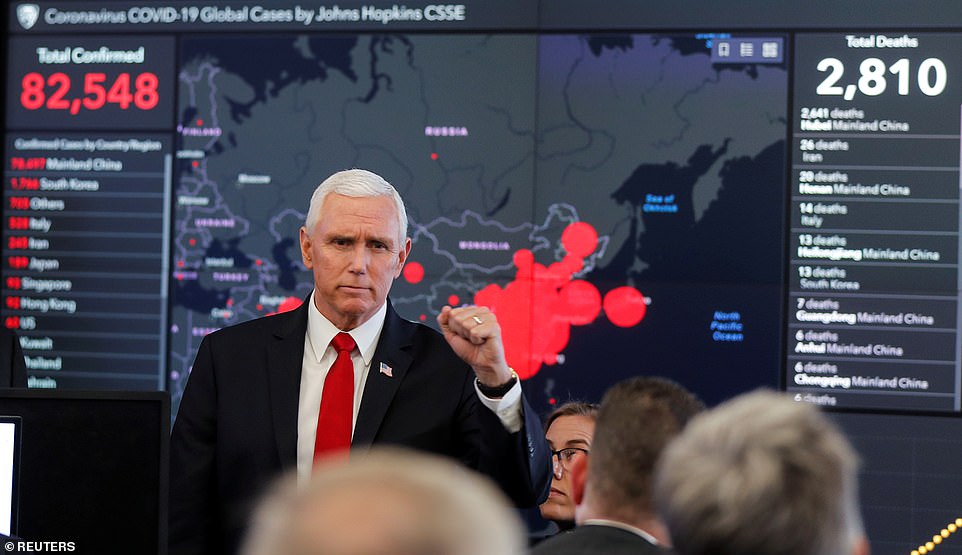 Heat map: Mike Pence gave a fist pump in front of a map showing the death toll from coronavirus so far. 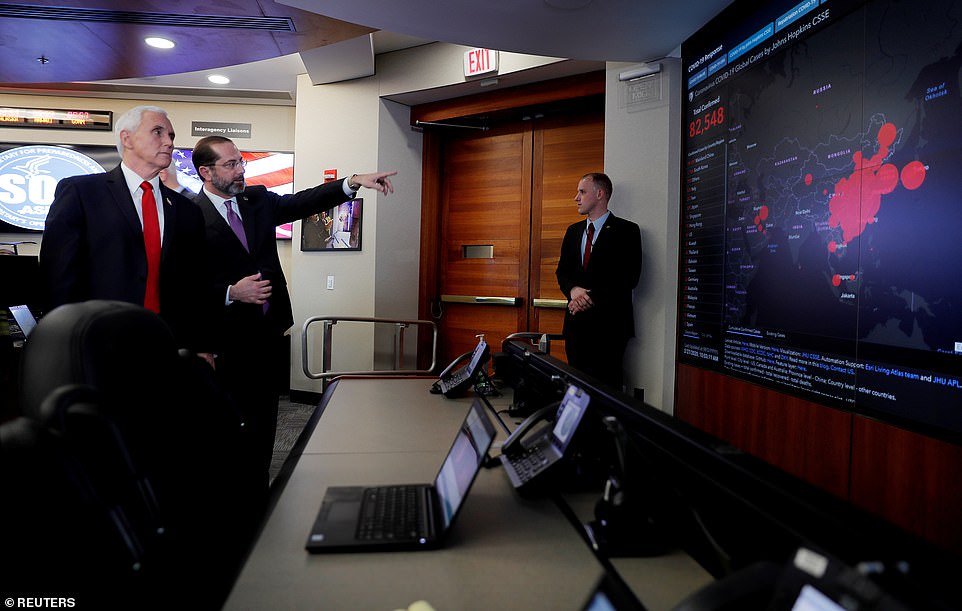 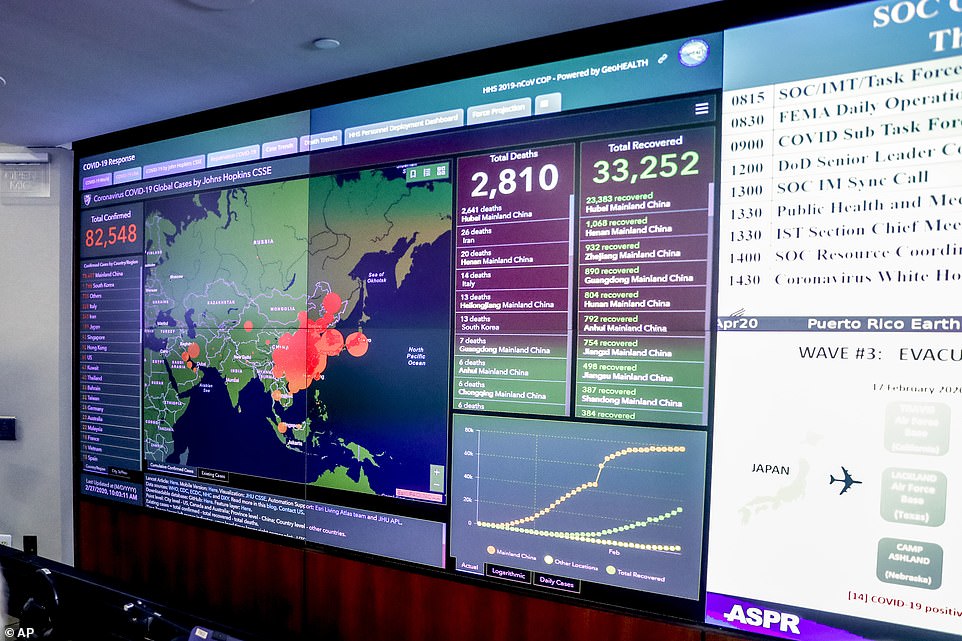 Effort: Mike Pence was shown the worldwide version of the map of cases. Tabs open at the top of the browser show that he could also have been shown HHS’ own map of it in the U.S. but was not 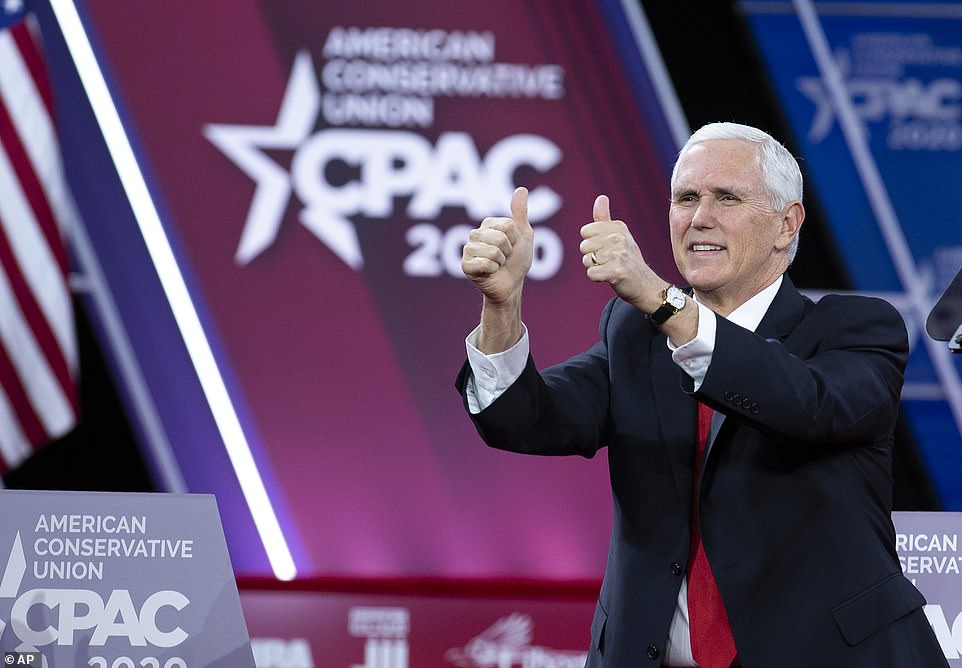 But first this: Mike Pence’s first public appearance was at the CPAC conference of Trump ultra-loyalists in Oxon Hill, Maryland – then he went back to Washington D.C. to chair the taskforce 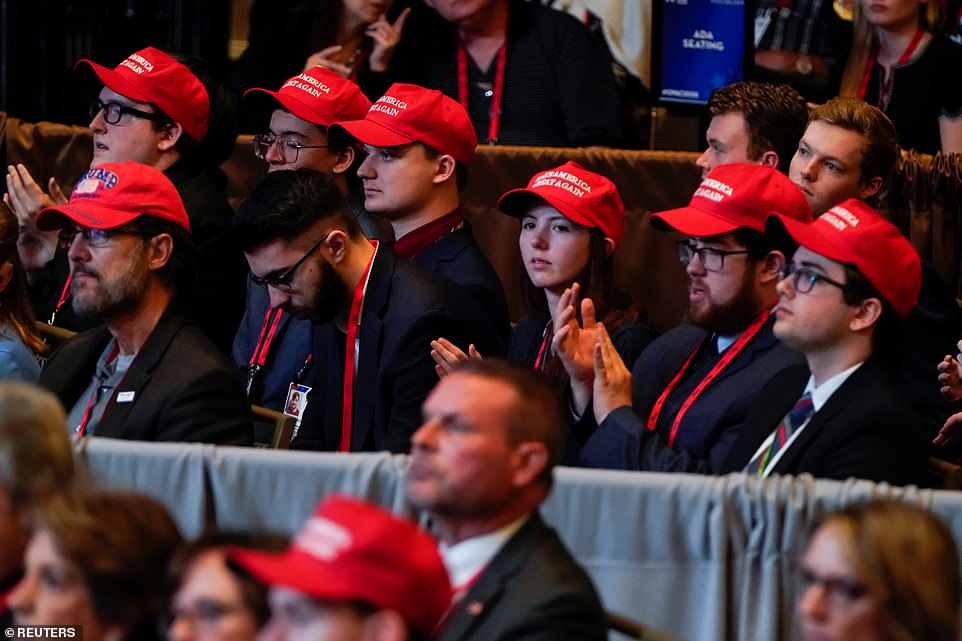 First to get the message: This was the audience for Mike Pence’s CPAC speech which went on as scheduled, with the coronavirus task force convened when he returned to Washington D.C.

Larry Kudlow – Director of National Economic Council, NOT A DOCTOR. Said the U.S. was ‘almost airtight’ from the virus

Robert Redfield – Director of the Centers for Disease Control and Prevention, DOCTOR

Anthony Fauci – Head of the National Institute of Allergy and Infectious Diseases, DOCTOR

Stephen Biegun – Deputy Secretary of State – NOT A DOCTOR. Not present at meeting.

Ken Cuccinelli – Acting Deputy Homeland Security Secretary, NOT A DOCTOR. Asked on Twitter why he could not find Johns Hopkins University’s coronavirus map

Joel Szabat – Assistant Secretary for Aviation and International Affairs, NOT A DOCTOR

Rob Blair – Senior Advisor to the Chief of Staff, NOT A DOCTOR

Joseph Grogan – Director of the Domestic Policy Council, NOT A DOCTOR

Christopher Liddell – Deputy Chief of Staff for Policy Coordination, NOT A DOCTOR

Derek Kan – Under Secretary of Transportation for Policy, NOT A DOCTOR

And as the taskforce met, there was new confusion over who exactly is in charge.

Health and Human Services Secretary Alex Azar stood side-by-side with Trump on Wednesday when the president announced that he was putting Pence ‘in charge’ of the government’s response to the virus.

At the end of the press briefing in the White House, Azar said he was ‘delighted’ to have the vice president’s help, but also said he wanted to ‘clarify’ that ‘I’m still chairman of the task force.’

Until now, acting White House Chief of Staff Mick Mulvaney had the role of coordinating the response across the government outside of the health care agencies.

Ahead of his first task force meeting, Pence made an appearance at CPAC, the Conservative Political Action Conference, where he promised ‘we will continue to bring the full resources of the federal government to bear to protect the American people.’

Pence’s first interview on the coronavirus was being recorded to be broadcast Thursday night to Fox News’ Sean Hannity – with every other TV appearance by health experts subject to his staff’s approval.

Even NIH virus expert Dr. Fauci, a staple on TV who has spoken about the challenges of the outbreak and precautions people can take, must get permission to appear. He told associates about the White House directive, according to the report.

Although he has taken on a number of challenges as Indiana governor and a former House GOP leader, Pence drew fire after his appointment from Democrats over his own decisions when confronting high AIDS transmission in his home state.

He has no medical background of any kind. He studied history at Hanover College and went on to learn a law degree. His resume includes a stint as a conservative radio host.

Missing entirely from the task force was National Center for Immunization and Respiratory Diseases director Nancy Messonnier, the doctor who warned Tuesday that coronavirus in the U.S. was inevitable.

She is the sister of Rod Rosenstein, the former deputy attorney general who oversaw the Robert Mueller special counsel probe, and was the target of conspiracy theory claims among Trump supporters that she ramped up her warning to hurt the president.

Pence’s own appointment was the subject of Democratic attack.

House Speaker Nancy Pelosi on Thursday cited Pence’s response as governor when Indiana was experienced a record-high rate of HIV infections due to sharing needles among drug addicts.  She pointed out that he slashed the public health budget and closed a clinic that did HIV testing at the time.

‘We look forward to working together in a bipartisan and in a very candid way about our concerns about past performance or statements that were made,’ she said.

‘Let’s put that in perspective as we move to have adequate funding, the respect for science and evidence-based decision making and, again, reimbursement for state and local government and understanding the impact this has on our communities,’ she said.

Bernie Sanders, the forerunner to take on Trump in the election, demanded Pence be replaced and the taks force packed with scientists and doctors, not ‘political cronies.’

‘First, they must replace Mike Pence with an expert on pandemics and disaster response,’ he said.

‘Second, the Trump administration must stop releasing misleading, unscientific, and false information about whether the coronavirus is controlled or when it will be controlled.

‘Third, they must immediately staff their response team with experts and scientists to help us address a pandemic based on facts – Steve Mnuchin and Larry Kudlow are political cronies, not scientists.’ 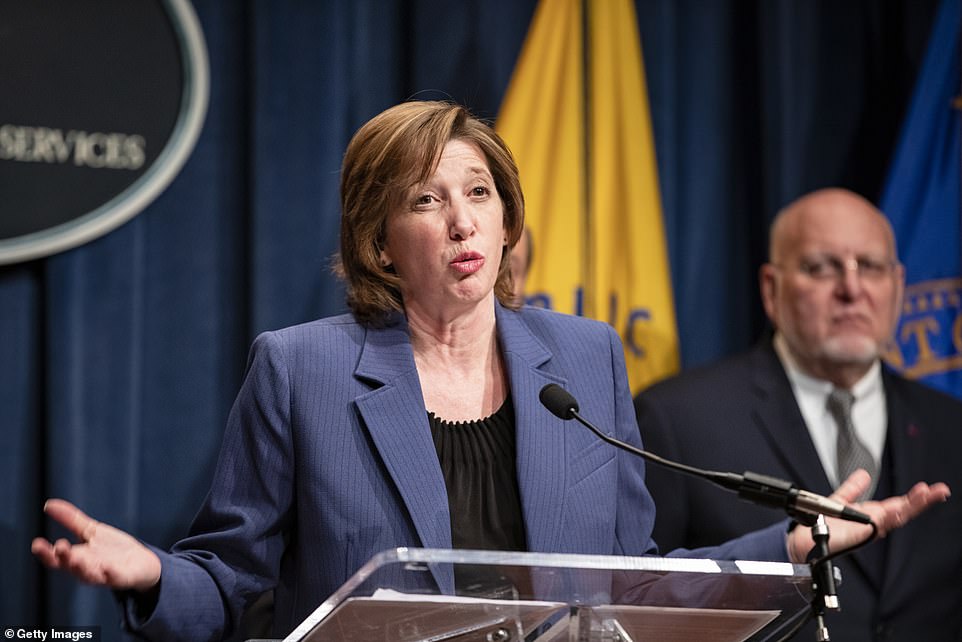 National Center for Immunization and Respiratory Diseases Director Nancy Messonnier speaks during a press conference today at the Department of Health and Human Services on the coordinated public health response to the 2019 coronavirus (2019-nCoV) on January 28, 2020 in Washington, DC 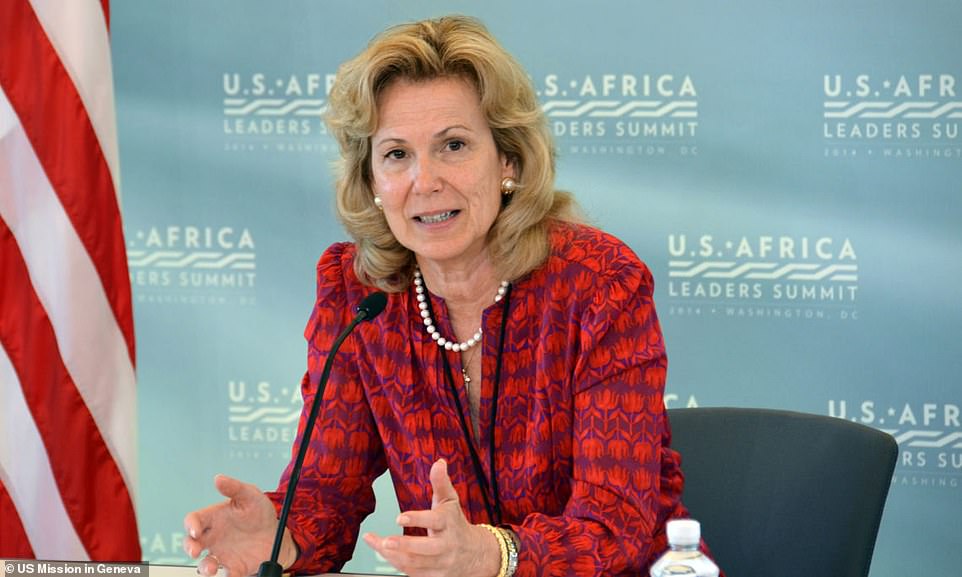 Where is she? Debbie Birx was announced to serve as the ‘White House Coronavirus Response Coordinator.’ She is a medical doctor who serves as U.S. Global AIDS coordinator – but could not be seen at the taskforce’s first meeting 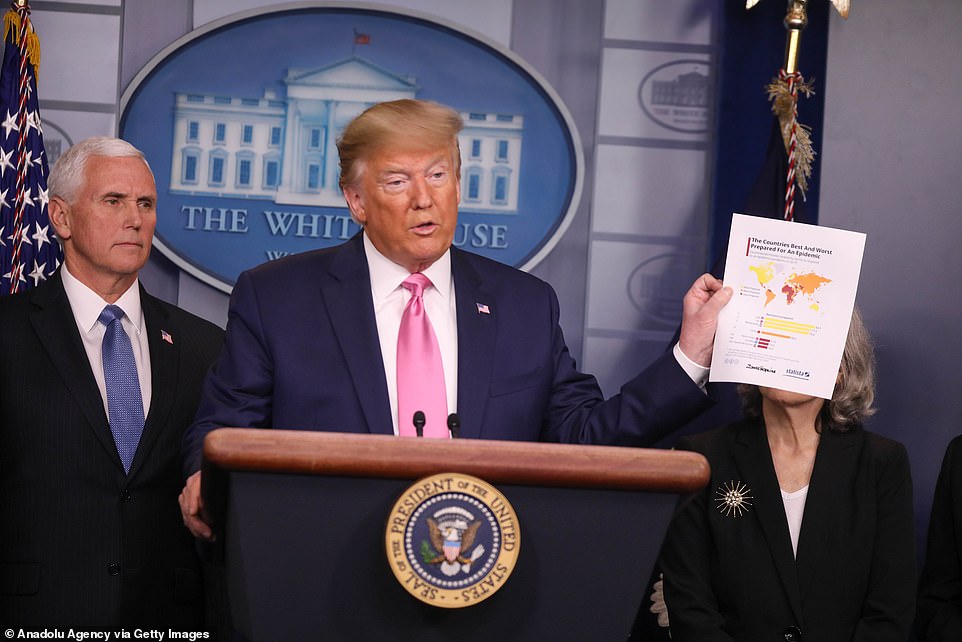 ‘Mike Pence literally does not believe in science. It is utterly irresponsible to put him in charge of US coronavirus response,’ Alexandria Ocasio-Cortez wrote on Twitter after his appointment.

The White House response had done nothing to stop a dramatic market sell-off which saw Wall Street plunge.

Trump had blamed 2020 Democrats ‘making fools of themselves’ for the drop on Wednesday night but analysts said it was entirely driven by fears over coronavirus.

The Dow Jones plummeted 1,190.95 points, or 4.42 percent, to 25,766.64, the largest one-day point drop in history. It comes during the quickest market plunge on a percentage basis since the financial crisis of October 2008.

The Dow, S&P 500 and Nasdaq all closed more than 10 percent below their recent highs. That means the market is officially in a correction, which is a phenomenon that analysts have said was long overdue.

At their heart, stock prices rise and fall with the profits that companies expect to make — and Wall Street’s expectations for profit growth are sinking as more companies warn that the virus outbreak will hit their bottom lines.

Rising fears of a pandemic, which U.S. health authorities have warned is likely, have erased about $1.84 trillion off the benchmark S&P 500 this week alone.

Industry analysts and economists continued to sound the alarm as they assessed the impact of the coronavirus, with Goldman Sachs saying U.S. companies will generate no earnings growth in 2020.

Apple and Microsoft, two of the world´s biggest companies, have already said their sales this quarter will feel the economic effects of the virus.

Microsoft’s stock lost 2.8 percent after it told investors that the virus will hurt revenue from its Windows licenses and its Surface devices. 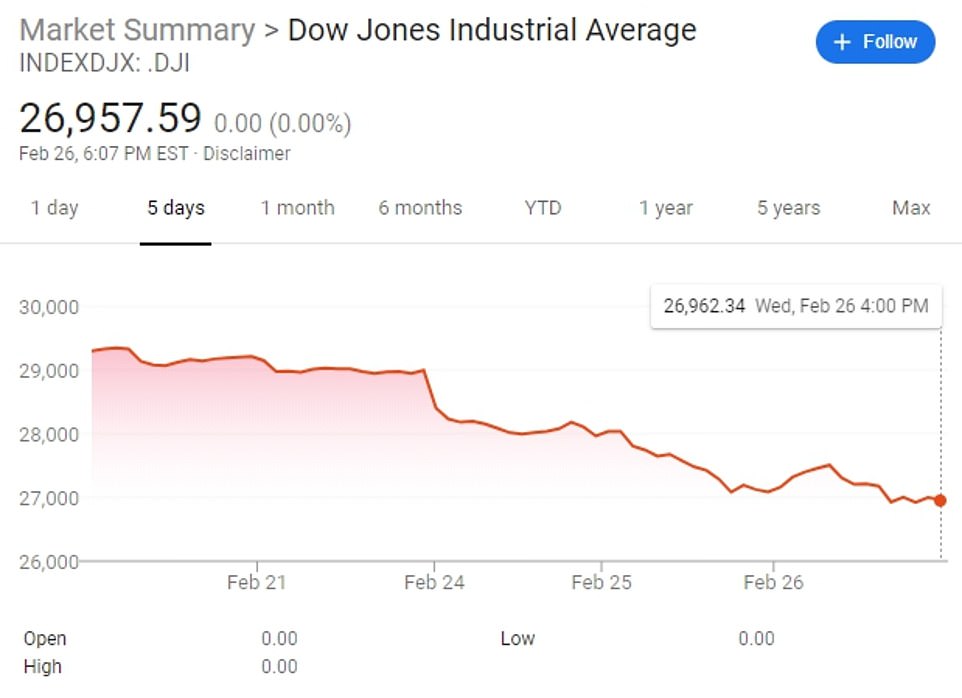 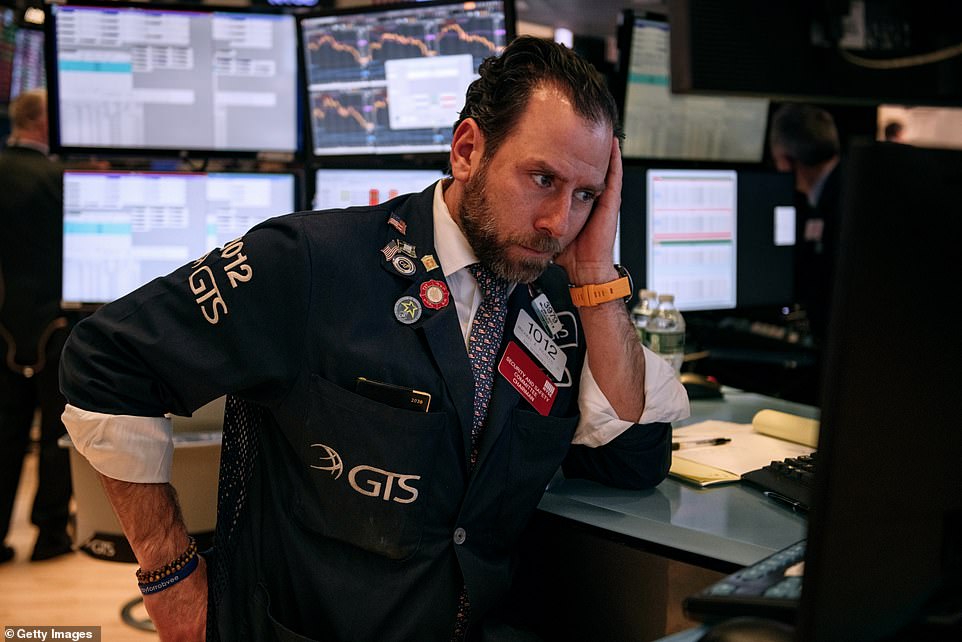 Traders work during the opening bell at the New York Stock Exchange on Thursday. About five minutes into trading, the Dow Jones Industrial Average was down 1.8 percent

Delta Airlines, which is reducing flights to South Korea because of the outbreak in that nation, fell 4.5 percent.

Bank of America slashed its world growth forecast to the lowest level since the peak of the global financial crisis.

The virus has now infected more than 82,000 people globally and is worrying governments with its rapid spread beyond the epicenter of China.

The price of crude oil fell 4.7 percent. The price has been falling sharply as investors anticipate that demand for energy will wane as the economy slows.

Ron Klain, who coordinated the U.S. response to the ebola threat during the Obama administration, had a sharp retort to Trump’s comment Wednesday that ‘because of all we’ve done, the risk to the American people remains very low.’

Klain tweeted on Thursday: ‘Oh look: it’s the ‘Mission Accomplished’ tweet for #coronavirus.’ That was a reference to President George W. Bush’s premature claim in 2003 that major combat operations in Iraq had ended when the war was to drag on for years.