Israelis must ‘consider the necessity of travelling abroad in general’, officials say The country has already cancelled flights from China and ordered quarantinesIsrael has confirmed two cases, both linked to the Diamond Princess cruise ship

By Tim Stickings For Mailonline and Associated Press

Israel has urged its citizens to reconsider any foreign travel at all in order to contain the coronavirus outbreak.

The warning from Israel’s health ministry is the strictest advice that any country has yet issued about international travel.

Israelis should avoid international conferences and ‘consider the necessity of travelling abroad in general’, the ministry said.

‘The assessment is that there is a high probability the disease has already spread to other regions of Europe and many other places in the world,’ officials say.

Passengers wearing protective masks walk through the arrivals hall of Ben Gurion International Airport in Israel, which has now urged people to consider any foreign travel

The ministry had already instructed Israelis returning from Japan, Hong Kong, Macau, Singapore, Thailand and South Korea to go into isolation at home for 14 days.

Israeli first responders were on high alert yesterday at a coronavirus nerve centre.

A designated hotline launched on Saturday has been fielding around 6,500 calls a day, according to the Magon David Adom emergency services.

Israel has reported two infections of the coronavirus so far, both involving passengers who had been on the quarantined Diamond Princess cruise ship in Japan.

Others are in quarantine, including those who encountered a group of South Korean pilgrims who visited Israel earlier this month and were later found to have the virus.

They include nearly 200 pupils who were in proximity to the South Koreans, who visited from February 8 to 15. 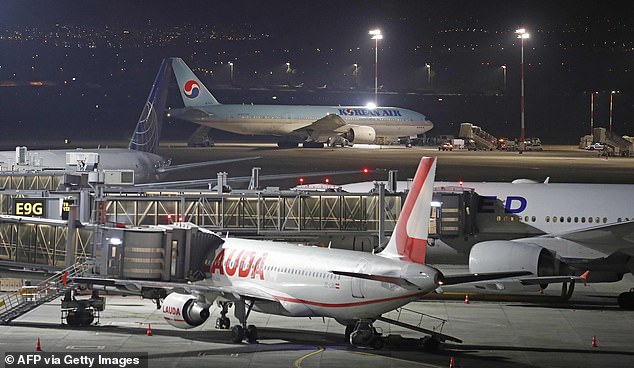 Planes at Ben Gurion Airport at the weekend, with Israeli officials warning that the virus is likely to have spread further

A coronavirus response centre in the central town of Kiryat Ono is to send experts to take samples from Israelis in home quarantine.

‘People are anxious and worried. They call saying they were near the Korean tourists in Beersheba, but not at the same time. We explain they are not among the group at risk,’ said Yael Arava, a paramedic trained to deal with coronavirus.

Anyone who was in contact with the group should self-quarantine, the health ministry said.

South Korea has become a major virus hotbed in itself, with many cases linked to a secretive religious sect based in Daegu.

Seoul has declared its highest ‘severe’ alert level over the virus, prompting the US and South Korean militaries to postponed joint exercises.

The United States has 28,500 troops in South Korea to protect it against the nuclear-armed North.