Iranian spokeswoman for the 1979 hostage crisis is diagnosed with coronavirusMasoumeh Ebtekar, who is also a vice president, has reportedly been infectedShe was pictured near President Hassan Rouhani during Iranian cabinet meeting

Reports in Iran today state a vice president in the Islamic Republic and a spokeswoman for the 1979 hostage-takers has been infected with the new coronavirus.

Masoumeh Ebtekar was said to have contracted the infection, according to local media.

She was seen sitting near to President Hassan Rouhani during a meeting of Iranian cabinet members yesterday.

Ebtekar was known during the hostage crisis as ‘Mary’ and also ‘Screaming Mary’ for her nightly televised rants against American imperialism throughout the US embassy hostage crisis in Tehran.

Iranian President Hassan Rouhani makes statements on the precautions against coronavirus after the National Coronavirus Prevention Center Meeting, in Tehran, on Tuesday

She is currently the Iranian vice president for Women and Family Affairs.

The report of Ebtekar’s comes as other top officials in Iran’s Shiite theocracy have caught the virus.

Saudi Arabia on Thursday banned foreign pilgrims from entering the kingdom to visit Islam’s holiest sites over the new coronavirus, potentially disrupting the plans of millions of faithful ahead of the Muslim fasting month of Ramadan and as the annual hajj pilgrimage looms.

The decision showed the growing worry across the Mideast about the virus as Iran confirmed that infected cases in the country spiked by over 100, to 254 now.

A total of 26 people have died so far, it said. That pushes the region’s overall cases to above 350. Iran’s death toll is highest outside of China, where the outbreak began.

It appeared Saudi officials worried about the risk of pilgrims spreading the virus as they had in Iran.

The virus’ epicenter in the Islamic Republic is the holy Shiite city of Qom, where the faithful in reverence reach out to kiss and touch a famous shrine.

That shrine and others have remained open, despite Iran’s civilian government calling for them to be closed. 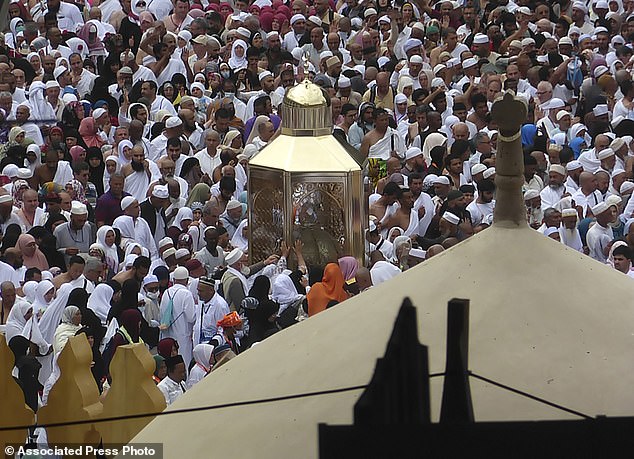 Saudi Arabia halted travel to the holiest sites in Islam in Mecca over fears of the global outbreak of the new coronavirus just months ahead of the annual hajj pilgrimage, a move coming as the Mideast has over 220 confirmed cases of the illness

The hardest-hit nation in the Mideast is Iran, where Health Ministry spokesman Kianoush Jahanpour on Thursday reported 26 deaths out of 245 confirmed cases of the illness.

Experts are concerned Iran may be under-reporting cases and deaths, given the illness’ rapid spread from Iran across the Persian Gulf.

Jahanpour seemed to address that, saying new labs in Iran were conducting tests and the number of confirmed cases could continue to spike in coming days. Thursday’s number represented a jump in over 100 new cases from the previous day.

Authorities said Friday prayers in Tehran and other cities would be canceled, according to semiofficial Iranian news agencies.

Supreme Leader Ayatollah Ali Khamenei on Thursday praised medical staffers, calling their work ‘very invaluable.’ But the virus has struck the official in charge of Iran’s response to the outbreak, as well as a reformist lawmaker.

On Thursday, a hard-line cleric from Qom who also serves in parliament posted a video online acknowledging he had been infected.

‘Yes, my corona test is positive, too and I am in quarantine,’ Mojtaba Zonnouri said in the video. ‘God willing, our nation will overcome in fight against corona.’