Iran has threatened to flog and imprison anyone caught ‘spreading fake news’ about the coronavirus outbreak that has already killed 26 people in the Islamic Republic.

Hassan Norouzi, spokesman for parliament’s legal and judicial committee, said ‘spreading lies’ is punishable by one to three years in prison with flogging, in accordance with Shariah law.

‘Spreading fake news over coronavirus outbreak will [make] people panic. It also will pave the ground for the country’s shutdown,’ the Tehran Times reported him saying in translation.

Nourouzi added that 24 citizens were already in custody for ‘spreading rumours’ and that the harsh sentences were warranted by Shariah.

Pharmacists talk with customers at drugstore in downtown Tehran, amid fears the country is running low on medical supplies 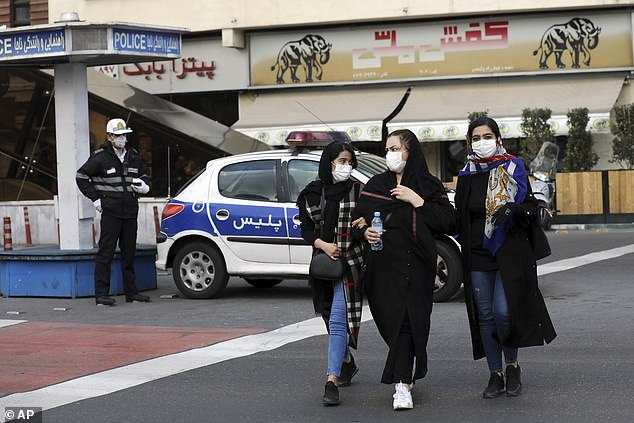 Three women and a police officer wear masks in Tehran on Sunday to guard against the coronavirus in Iran, which now has the worst outbreak in the Middle East 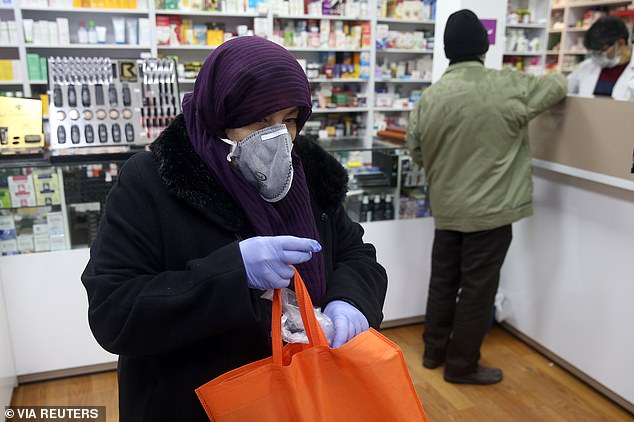 An Iranian woman wears a protective mask to prevent contracting coronavirus, as she is seen at a drug store in Tehran

Iran uses Shariah law as the basis of its legal code, allowing crimes deemed  malicious against the state to be punished with corporal beatings.

On Monday, the Iranian government condemned moves to politicize the outbreak and criticised media outlets for what it saw as flinging accusations against the health ministry.

Iran has confirmed seven new deaths from coronavirus over the past 24 hours, the health ministry said today, taking the overall toll to 26, the highest outside China.

In the wake of surging cases, officials have warned against visiting the holy city of Qom, where many of the infections have been detected, but President Hassan Rouhani yesterday refused to cordon off the religious hub, saying the regime will focus on containing individuals, not areas.

The city is the second most holy site for Shi’a Muslims and it’s feared pilgrims could spread the virus through the Middle East. 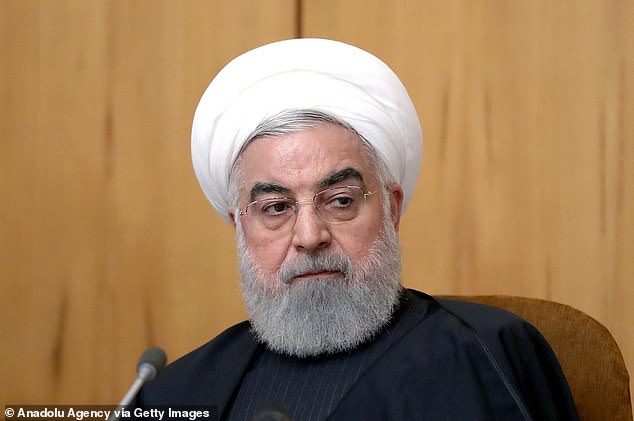 Iranian President Hassan Rouhani makes a statement on coronavirus at a cabinet meeting in Tehran, Iran on February 26, 2020

Rouhani admitted that it may take ‘one, two or three weeks’ to get control of the virus in Iran, which has been linked to almost all of the cases across the Middle East.

However, Rouhani also attempted to turn Iranian anger against the United States, saying that the virus ‘must not be turned into a weapon for our enemies to halt work and production in our country’.

‘The Americans and our enemies during this time, around two years of which have passed, have wanted, with their sanctions and propaganda, to shut down production and economic activities in this country and for the people to suffer,’ he said.

Iran’s economy has been battered by US sanctions since Donald Trump quit the nuclear deal in 2015, contributing to shortages of medical equipment.

In a shock for the regime, the Iranian health minister announced Monday that he had been infected with the coronavirus, which has killed just over 2,800 people worldwide.

In a video released on Tuesday, he vowed the regime will bring the spiralling outbreak under control.

Iraj Harirchi said Iran would be ‘victorious in our combat against this virus’ in a video message he recorded after he was taken into quarantine yesterday.

Iraj Harirchi was diagnosed with coronavirus on Tuesday, just a day after he appeared at a press conference sweating profusely while insisting the country had its outbreak under control 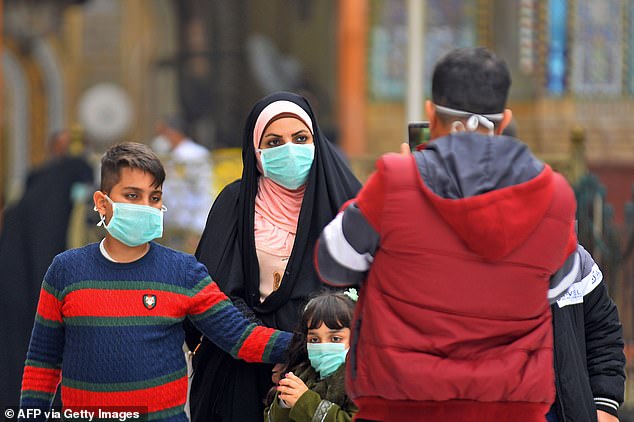 Harirchi’s diagnosis was an embarrassment for the regime after he had insisted a day earlier – while sweating heavily at a press conference – that the outbreak was not as bad as feared.

Several of Iran’s neighbours, including Iraq, Bahrain and the UAE have shut down transport links after the virus spread across porous borders and infected people across the Middle East.

Bruce Aylward, who leads the joint WHO-China mission of experts, said Beijing’s success in firefighting the infection has lulled other nations into a false sense of security.

He said: ‘You have to be ready to manage this at a larger scale… and it has to be done fast,’ insisting countries have to ‘be ready as if this hits us tomorrow’.

Dozens of countries are now battling outbreaks, with South Korea, Italy, Japan and Iran among the worst-affected.