Glowing amphibians such as frogs may be more common than previously thought, according to a new study.

US biologists found more than 30 species of amphibians, including toads, frogs, newts and salamanders, all showed a natural phenomenon called ‘biofluorescence’.

Biofluorescence, where organisms emit a fluorescent glow after absorbing light energy, may be widespread in amphibians, the team conclude.

The researchers say it may help amphibians find each other in dim light, attract mates or help camouflage themselves in the face of predators.

The colourful effect had previously only been observed in one salamander and three frog species. 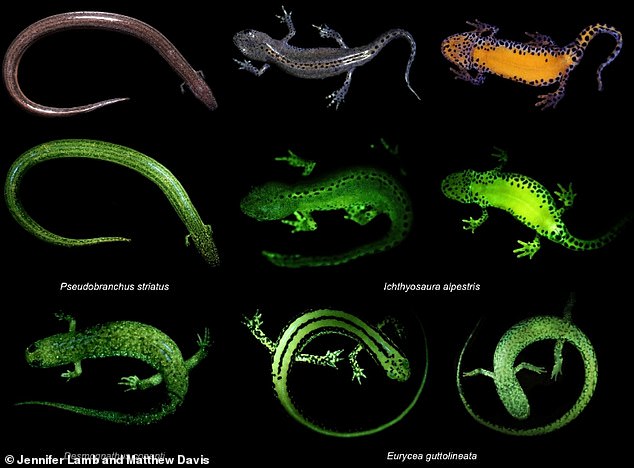 The team, from St. Cloud State University in Minnesota, exposed somewhere between one to five creatures from 32 amphibian species to blue or ultra-violet light.

This included common North American species such as the American toad, the wood frog, the California giant salamander and the green pacman frog, which is kept in the US as a pet.

While most of the 32 species are from North America, others observed are native to South America (such as the Amazon milk frog) Europe (Alpine newt) and China (Fire belly newt). 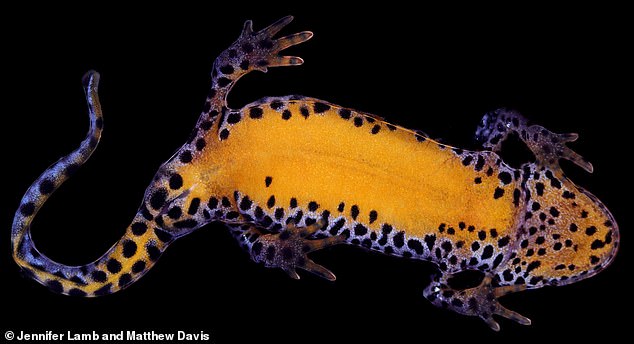 Close-up of the Alpine newt (Ichthyosaura alpestris). The study suggests the ability to emit the fluorescent glow after absorbing light energy may be widespread in amphibians, including those that weren’t used in the study 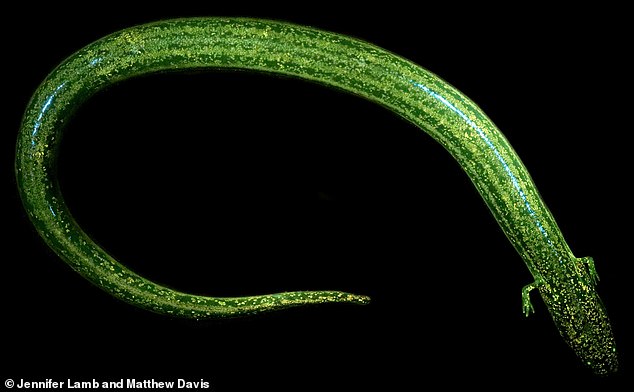 Bioflourescence in a dwarf siren salamander, which ranges in length from about 4 to 10 inches 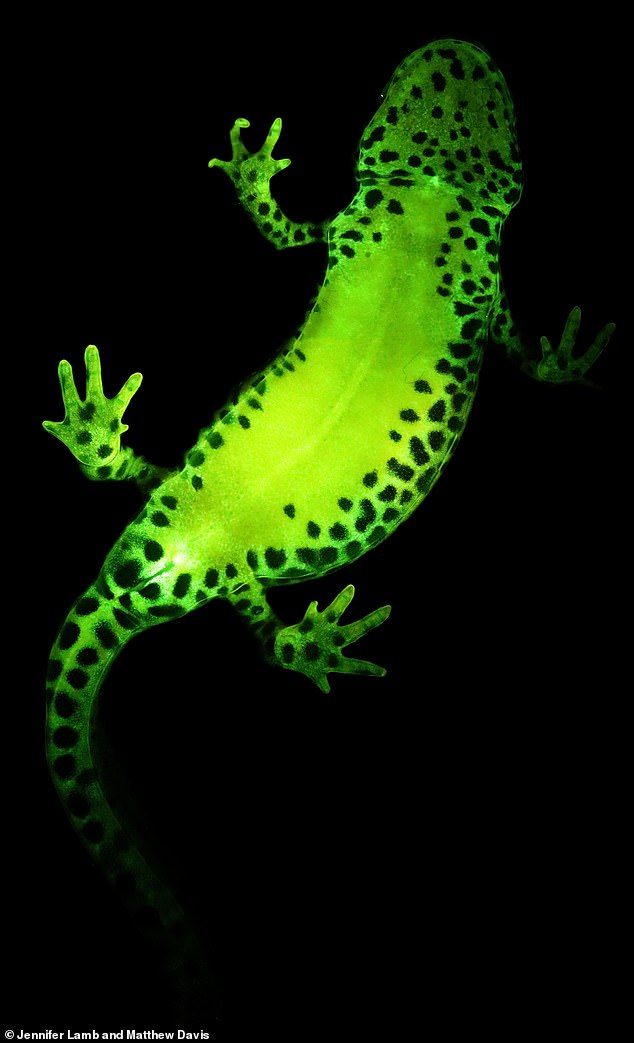 Close-up of the Alpine newt (Ichthyosaura alpestris). The biggest of the males can reach up to 3.5 inches and the females 4.7 inches

The team measured the wavelengths of light emitted by the animals using a spectrometer, an instrument used to measure properties of light over a portion of the electromagnetic spectrum.

All the creatures that were exposed to light – 50 in total – showed varying degrees of biofluorescence in different body parts.

Fluorescent patterns differed between species, from blotches and stripes to fluorescent bones and all-over fluorescence. 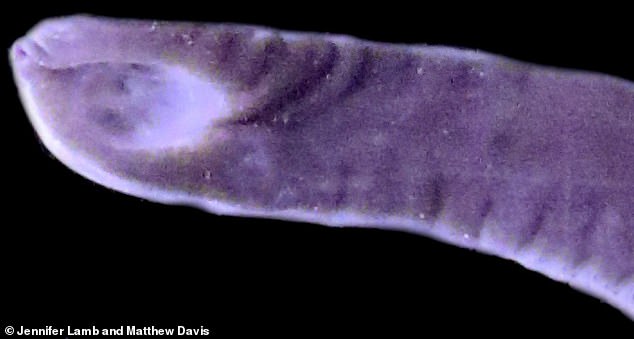 A Rio Cauca caecelian. Caecilians are a group of serpentine amphibians that completely lack limbs 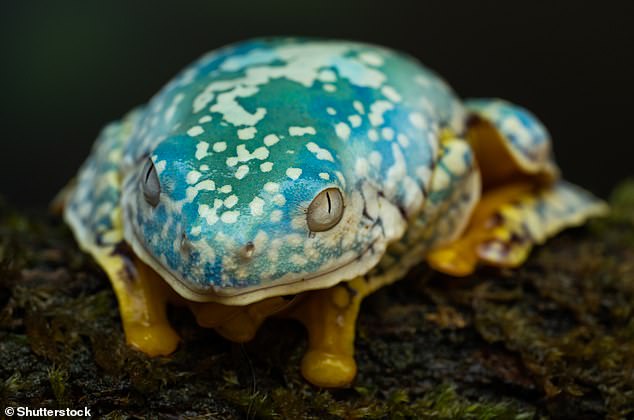 Closeup of a fringed leaf frog in defensive pose – one of the many amphibian species that displays biofluorescence. This could be as a means of camouflage or attracting a mate 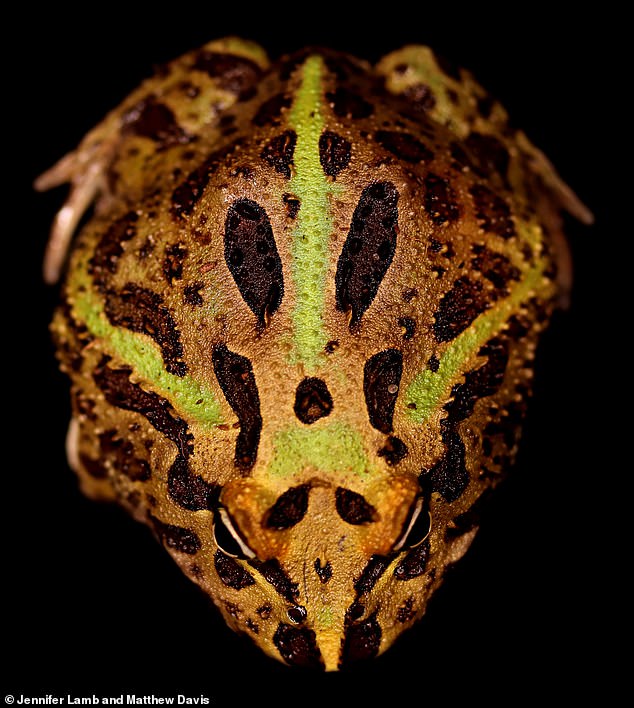 Biofluorescence is the absorption and emission of light from living organisms.

These organisms have proteins in their skin or other tissues that absorb light.

Fluorescence is the temporary absorption of electromagnetic wavelengths from the visible light spectrum by fluorescent molecules, and the subsequent emission of light at a lower energy level.

When fluorescence occurs in a living organism, it is known as called biofluorescence.

Of all the species observed in the study, those from the ambystomatidae family of salamanders – spotted, blue spotted, marbled and eastern tiger species – showed the highest rates of biofluorescence.

‘We were surprised to find that every amphibian species we tested exhibited varying degrees of striking biofluorescent patterns that glowed a brilliant green colour, including from varying life history stages from tadpoles to adults,’ Matt Davis, co-author of the research, told MailOnline.

‘Some of our favourite patterns were those found in salamanders, where spots and other markings often glowed with intense fluorescent emissions, such as the Eastern tiger salamander.’

Biofluorescence may help amphibians to locate each other in low light, thanks to small photoreceptor cells in their eyes – called rod cells – that are sensitive to green or blue light.

The light effect may create more contrast between amphibians and their environment, allowing them to be more easily detected by other amphibians.

It could also aid amphibians in camouflage – including predator mimicry, where they blend with surroundings to catch prey – or even mate choice, as observed in other biofluorescent species such as parrots.

The Eastern tiger salamander, which is found in North America. The species’ spots glowed with ‘intense fluorescent emissions’ 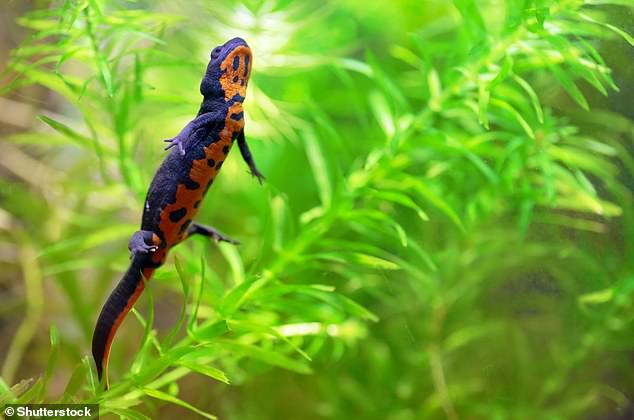 One of the few species used in the study that originates from outside the Americas was the Chinese fire belly newt (pictured), which has a bright-orange pattern on its underside to detract predators 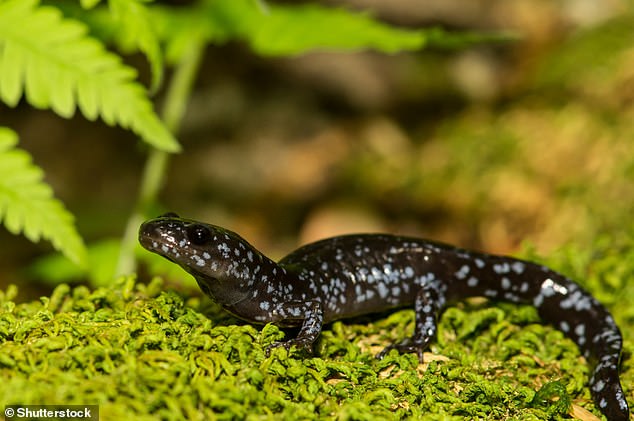 The blue-spotted salamander, one of the 32 species, is native to the Great Lakes states and northeastern United States

Mechanisms that cause biofluorescence may include the presence of fluorescent proteins and compounds in skin, secretions and bones.

It may also relate to the chemical and structural composition of some amphibians’ chromatophores, which are pigment-containing and light-reflecting cells.

The findings suggest that ancestors of modern amphibians were able to biofluoresce, resulting in the phenomenon being widespread among amphibians today.

‘Biofluorescence is widespread and variable across Amphibia, and our findings shine a new light on how much more we have to learn about the biology of these fascinating vertebrates,’ the authors say.

Previous studies have documented the presence of biofluorescence in ray-fined fishes, arthropods and cnidarians – a marine phylum that includes corals and jellyfish.

‘In recent years there has been a number of studies that have identified that biofluorescence is widespread among vertebrate lineages such as cartilaginous fishes (sharks), ray-finned fishes (eels, wrasses, gobies), and sea turtles,’ Professor Davis told MailOnline.

‘We were interested in exploring whether biofluorescence is a phenomena that is widespread in amphibians, as they are aquatic to semi-aquatic vertebrates that are often exposed to light environments that may be conducive to fluorescent conditions.’

The research has been published in Scientific Reports.