A 15-year-old girl in China who looked decades older due to a rare condition is now enjoying taking selfie videos after receiving life-changing plastic surgery.

The teenager, known by a pseudonym Xiao Feng, told MailOnline she was ‘extremely surprised’ and ‘very happy’ when she saw her new looks for the first time following the £56,000 operation.

Before the procedure, she never dared to take a selfie and did not have any friends, but now she likes filming herself because ‘I am prettier and more confident.’ 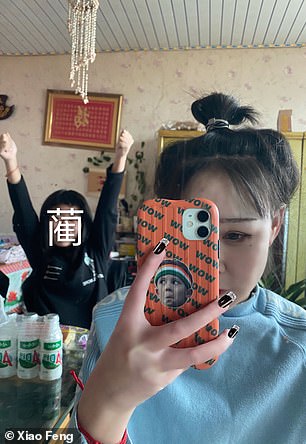 Before the surgery, she never dared to take a selfie and did not have any friends. But now she has made new friends and likes filming herself because ‘I am prettier and more confident’ 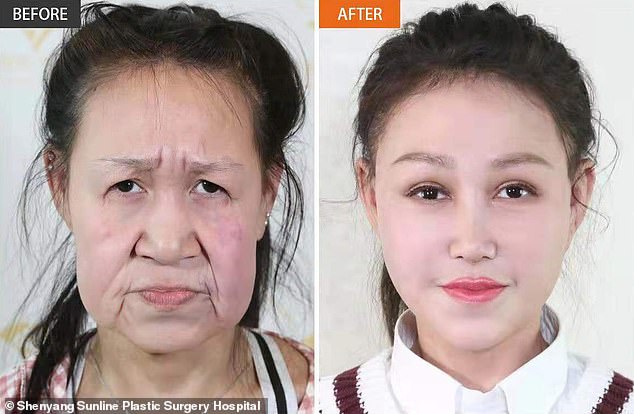 A handout picture released by China’s Shenyang Sunline Plastic Surgery Hospital shows Xiao Feng’s face before and after the surgery. The teenager underwent the operation in December 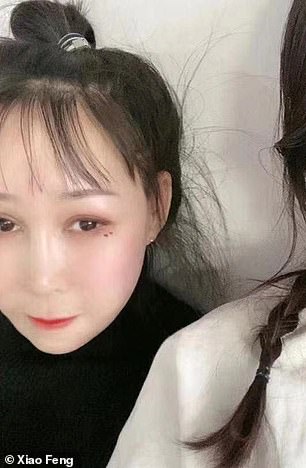 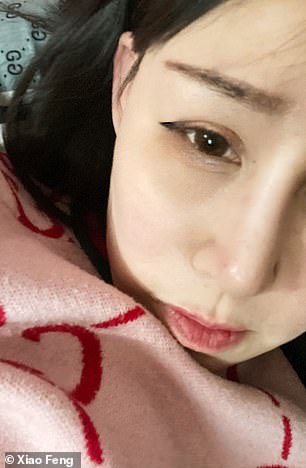 Xiao Feng said that she was looking forward to starting a new episode of life after being bullied at school for years because of her looks. She told MailOnline she was ‘extremely surprised’ and ‘very happy’ when she saw her new looks for the first time following the £56,000 operation

Xiao Feng said that she was looking forward to starting a new episode in life after being bullied at school for years because of her appearance.

The girl was able to receive the treatment after Good Samaritans teamed up to cover her medical bills.

She had contacted a philanthropist for help having felt insecure and inferior to others all her life.

She said: ‘In the past, all I hoped was to be like other children and to study and live normally… I dreamt of being young in appearance even just for a few days.’

‘And now for the first time, I finally have a face that is fit for my age. I finally know what it means to be young in the real sense.’ 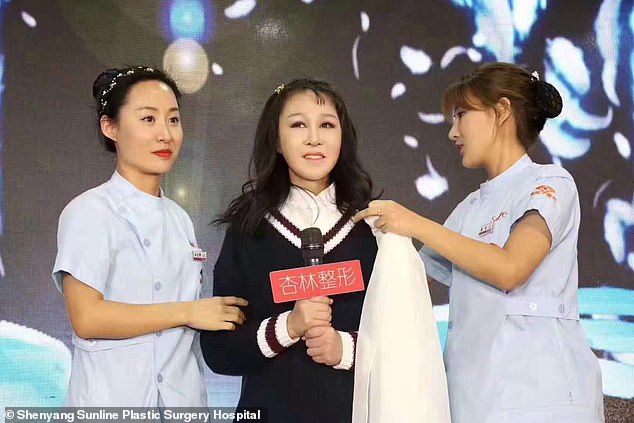 Xiao Feng met the public for the first time with her new looks on January 20 after undergoing the procedure, which took place in December and lasted seven and a half hours, according to medics.

Surgeons from Shenyang Sunline Plastic Surgery Hospital claimed that Xiao Feng had progeria, a rare genetic condition that occurs in an estimated one in eight million live births and causes a person to age prematurely.

In Xiao Feng’s case, the condition only affected her skin, not her organs, a spokesperson from the hospital told MailOnline.

Xiao Feng’s mother is said to have the same condition.

Kind strangers raised more than £20,000 to cover her medical bills. 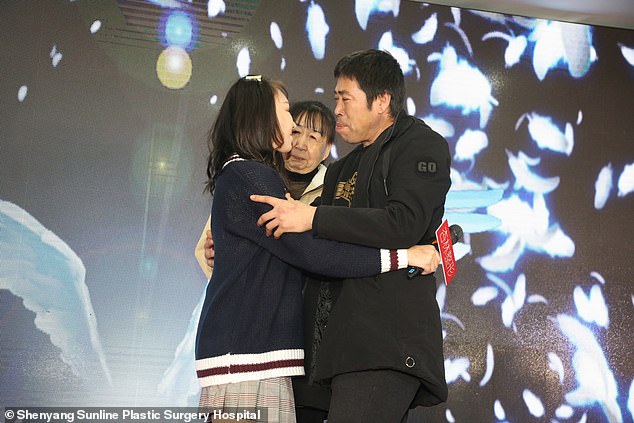 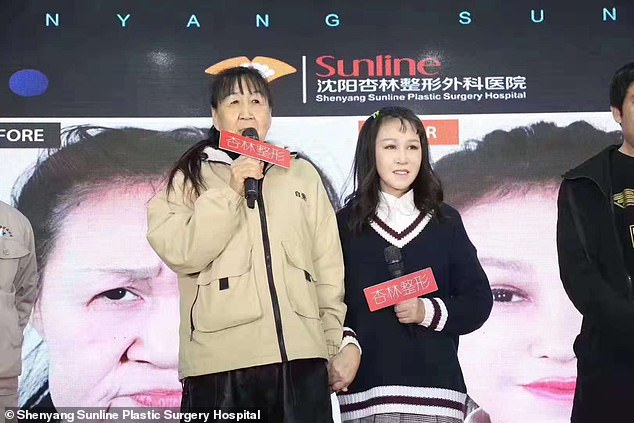 The surgical operation took place on December 29 and was attended by 10 surgeons, three anaesthetists and five nurses, according to the hospital.

Dr Shi told MailOnline that her hospital eventually cancelled all of Xiao Feng’s medical bills which totalled 500,000 yuan (£56,000) because the management wanted her to use the funds raised by the public on her recovery and future studies.

With a new appearance, Xiao Feng was presented to the public by the hospital at a press conference in Shenyang, the provincial capital of Liaoning. 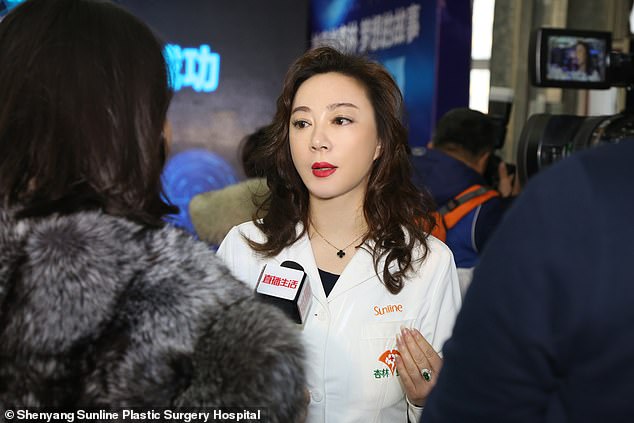 Dr Shi Lingzhi (pictured), head of the hospital, said they had cancelled all of Xiao Feng’s medical bills, which totalled 500,000 yuan (£56,000). The medic told MailOnline that the hospital wanted her to use the funds raised by the public on her recovery and future studies

Dr Shi said that the medics did not allow Xiao Feng to look into the mirror after the operation, and the girl could not contain her tears while seeing her new self for the first time at the event.

The teenager was also seen hugging her parents and crying on stage.

Mr Wang, a farmer, added: ‘The night after Xiao Feng’s surgery was the night when I slept the soundest because I believed that doctors could cure my daughter’s condition and help her live and study happily in the future.’

Xiao Feng was born to a less-fortunate family in Heishan county of Jinzhou city in Liaoning Province.

‘Nobody wants to play with me, and only pigeons are willing to accompany me because they won’t dislike me or think I am ugly,’ she previously said. 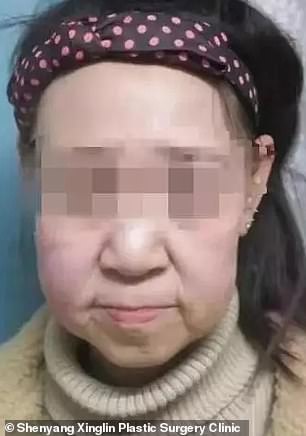 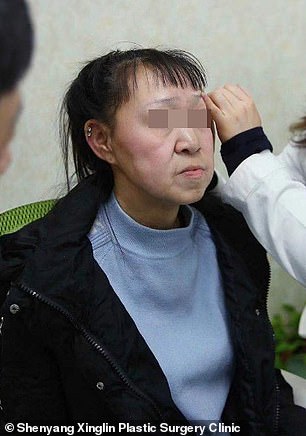 Xiao Feng (pictured), a 15-year-old from rural China, suffers from a rare genetic condition that makes her appear decades older. The teenager doesn’t have any friends and has never dared to take a selfie. With the help of a philanthropist, she had undergone medical treatment

Her father said that her skin started to become saggy all across her body when she was about one year old and the condition worsened as she grew older.

After she graduated from her middle school earlier this year, Xiao Feng chose to halt her education and coop up at home because she was scared of meeting new friends and classmates.

‘I am 15 years old, but I have the face of a 60-year-old. How I long to look like a high school student,’ a desperate Xiao Feng wrote as she sought help from Guo Mingyi, a local philanthropist.

Xiao Feng is described as a ‘quiet’ and ‘gentle’ girl, and she likes putting makeup on her face – but only when nobody is around.

‘When she was in her primary school, she was often mistaken for “the parents of pupils”; and whenever she went to the town with her mother, people would surround them, look at them and talk about them,’ her father told Xinhua News Agency. 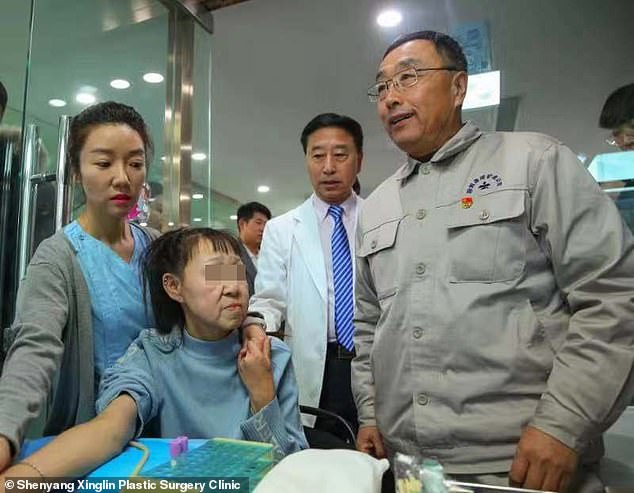 Philanthropist Guo Mingyi (right) is pictured arranging Xiao Feng to seek medical advice from Sunline Plastic Surgery Clinic, which agreed to give the girl a 70 per cent discount on the bills 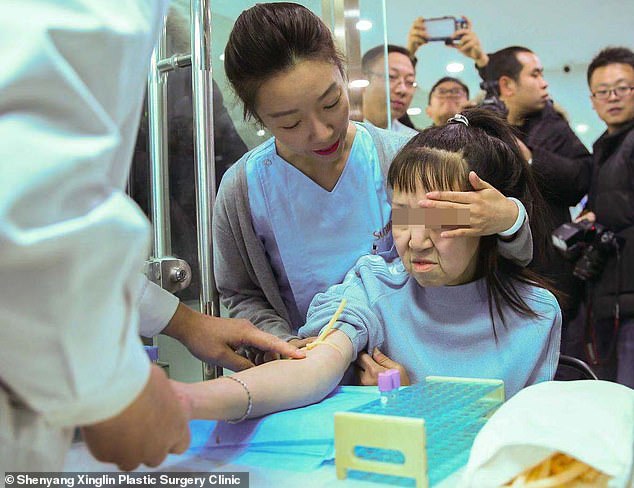 The teen is pictured going through pre-surgical checks. A spokesperson said that Xiao Feng was recovering very well and she felt excited that Xiao Feng’s surgery had gone so smoothly 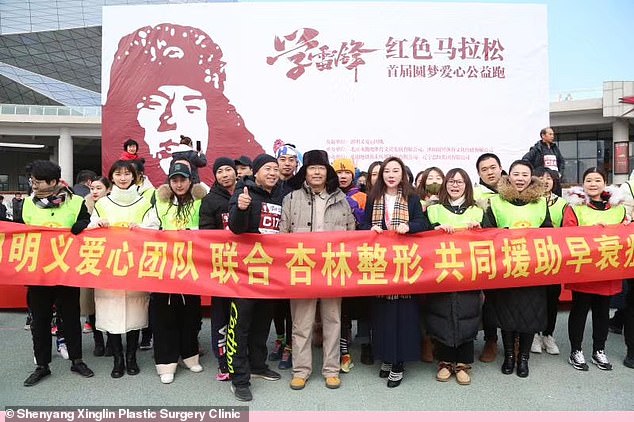 Xiao Feng hoped that philanthropist Guo could help her raise funds so her looks could be improved through cosmetic surgery.

The name derives from the Greek word meaning ‘prematurely old’.

Children with progeria generally appear normal at birth. During the first year, signs and symptoms, such as slow growth and hair loss, begin to appear.

Heart problems or strokes are the eventual cause of death in most children with progeria.

The average life expectancy for a child with progeria is about 12 years, but some with the disease die younger and some live 20 years or longer.

There’s no cure for progeria, but ongoing research shows some promise for a treatment.

‘Uncle Guo, how do I wish to return to normal life and not feel the need to avoid other people’s attention or feel haunted by my classmates’ whispers,’ she wrote in a letter to Mr Guo.

In December, Mr Guo, who is also the deputy chairman of the All-China Federation of Trade Unions, arranged Xiao Feng to seek medical attention from Sunline.

The hospital immediately agreed to give the teenager a 70 per cent discount for the surgery.

To help Xiao Feng cover the medical bills, Mr Guo organised a city-wide charity event for the girl on December 7.

He brought Xiao Feng and her family to the streets and companies in Shenyang to collect donations. The public handed out more than 40,000 yuan (£4,290) on the day.

Besides, more than 1,000 joggers in Shenyang took part in a charity marathon organised by Mr Guo to show their support and encouragement for the teenager.

Dr Shi said she and her staff were happy to see Xiao Feng enjoying her life positively and confidently.