The most serious terrorists should be handed ‘whole life’ jail sentences and die behind bars, a former head of MI5 said last night.

Jonathan Evans, who retired as director general of the Security Service in 2013 and is now a cross-bench peer, also said he fully backed the Government’s tougher terror sentencing laws which were passed yesterday.

But the former spy chief went further, suggesting there should be even more stringent sentences, adding that the system was currently ‘too complex’.

Speaking at Anglia Ruskin University in Chelmsford, Essex, Lord Evans said: ‘I think there’s a case for whole life tariffs and from my perspective it would not be a major problem if they were introduced more widely for very serious terrorist offences.’ Whole life tariffs are usually imposed on the very worst murderers such as serial killers and child killers. 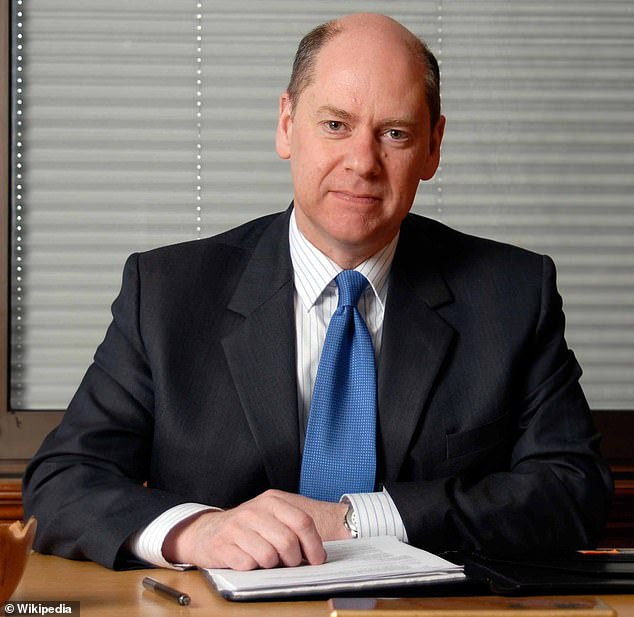 Emergency legislation passed through Parliament last night ending the automatic release at the halfway point of a terrorism sentence – offenders will instead have to serve at least two-thirds of their term. All releases will also have to be approved by the Parole Board.

Deputy Speaker Nigel Evans announced in the Commons that the Terrorist Offenders (Restriction of Early Release) Bill – which was passed by MPs earlier this month – has now become an Act.

The legislation, which will affect around 50 prisoners, ensures terrorist offenders serve two-thirds of their sentence before they are considered eligible for release.

Before being freed they would need to be reviewed by a panel of specialist judges and psychiatrists at the Parole Board.

The House of Lords backed the Bill unamended in one sitting on Monday evening.

The Act has been passed just two days before the next terror prisoner is eligible to be freed.

Sunderland shopkeeper Mohammed Zahir Khan, originally from Birmingham – who was jailed for four-and-a-half years in May 2018 after posting material supporting so-called Islamic State on social media, was due for release on February 28.

Mr Evans told MPs: ‘I have to notify the House in accordance with the Royal Assent Act 1967 that Her Majesty has signified her royal assent to the following Act: Terrorist Offenders (Restriction of Early Release) Act 2020.’

The release date change follows the Streatham terror attack earlier this month in which Sudesh Amman stabbed two bystanders with a knife he had grabbed from a shop.

The 20-year-old had been jailed in December 2018 for possessing and distributing terrorist documents but had been freed midway through his sentence less than a fortnight before the attack.

The law will apply to offenders sentenced for crimes such as training for terrorism, membership of a proscribed organisation, and the dissemination of terrorist publications.

Justice Secretary Robert Buckland said: ‘No terrorist should be released early only to kill and maim on our streets. Protecting the public is Government’s first duty and our message is clear – enough is enough.

‘From today, terrorist offenders will only be released before the end of their sentence if the independent Parole Board is satisfied they no longer pose a threat, and they will face the strictest possible conditions and monitoring upon release.’

In addition, all terrorist offenders will be subject to robust safeguards upon release, which could include notification requirements, restrictions on travel and communications, and imposed curfews.