Drugs are killing TWICE as many people as car crashes, sparking calls for police to crack down on county lines gangs who are fuelling the staggering statistic

By Rebecca Camber Chief Crime Correspondent For The Daily Mail

Britons are now twice as likely to die from drugs than a road accident, a police chief revealed yesterday.

The shocking fact lays bare the scale of the drug menace gripping the country.

It was revealed by top police officer Andy Cooke. He also told how drug dealers are peddling ‘woke coke’, attracting middle-class users with the claim that drugs are ‘ethically-sourced’ and ‘no-one had been harmed in the production of this cocaine’.

The figures emerged on the day a major report warned of the unprecedented number of children and teenagers being drawn into the drug trade through county lines gangs.

Dame Carol Black’s review for the Home Office said a resurgence in crack cocaine use led to a rise in killings while the growth of county lines gangs has increased levels of violence. A stock photo is used above for illustrative purposes only [stock photo]

Dame Carol Black’s drugs review revealed that deaths due to misuse of substances were the highest on record, with a total of 4,104 in the UK in 2018, with 2,917 recorded in England and Wales and 1,187 in Scotland.

Yesterday Chief Constable Cooke, who leads the National Police Chiefs’ Council on crime operations, said the rising death toll was more than double the 1,784 killed on Britain’s roads in the same year.

He called for police forces to ‘come down hard’ on all types of drug offences, including possession of cannabis.

Deaths involving cocaine doubled between 2015 and 2018 and the number of deaths overall from misuse of drugs rose by 16 per cent between 2017 and 2018.

‘It’s shocking, but sadly not surprising, that you are now twice as likely to die a drugs-related death than from a road accident,’ he said.

‘It’s why everyone must focus more on dealing with addiction, alongside the police work to target the dealers. 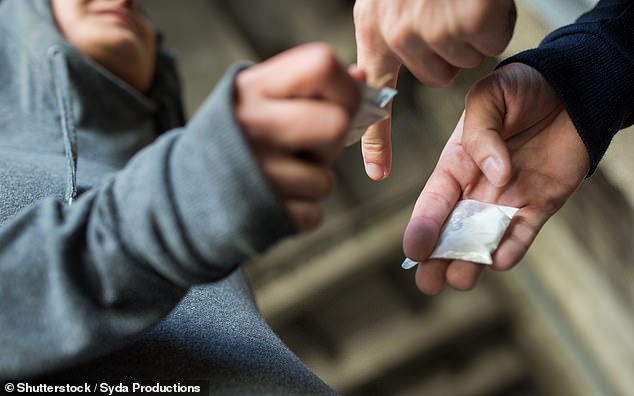 Deaths involving cocaine doubled between 2015 and 2018 and the number of deaths overall from misuse of drugs rose by 16 per cent between 2017 and 2018. A stock photo is used above for illustrative purposes only [File photo]

‘It is a hidden shift, because no real attention has been paid to the number of drug deaths … until county lines became an issue.’

Mr Cooke added: ‘People have realised it is not just an issue for Manchester, Merseyside or Birmingham, it is an issue for every town and city.’

The Merseyside Chief Constable spoke at the National Police Chiefs’ Council and Association of Police and Crime Commissioners summit as he condemned middle-class users for fuelling a trade which is costing society around £19billion a year.

Dealers with business cards who deliver in just 27 minutes

Hard drugs are as easy to obtain as a takeaway pizza because organised crime is flooding Britain’s streets with ‘abundant’ supplies, a Government analyst warns.

Substances such as cocaine and ecstasy can be delivered to the door in minutes by dealers – in some cases more quickly than a 12-inch pepperoni. Many dealers even carry business cards.

An official Home Office study revealed violent county lines gangs have usurped local dealers in virtually every part of the country and are intimately linked with a ‘dramatic increase in violence’.

Report author Dame Carol Black, former president of the Royal College of Physicians, told a Home Office drugs conference in Glasgow: ‘You can buy whichever drug you want almost anywhere. It’s almost – for some drugs – as easy as getting your pizza.’

A BBC investigation found it took just 27 minutes to get hold of an order of cocaine from a dealer in Leeds, who had his own business cards.

A reporter texted a dealer at 7.35pm, received a reply 20 minutes later, and seven minutes after that handed over £60 cash for two small bags of drugs.

Dame Carol’s review said organised crime is driving use of hard drugs and other illegal substances in rural areas.

Dame Carol said: ‘The county lines model now stretches all over the country and has largely displaced local dealers.’

Increasingly, local children are being recruited to work for the gangs rather than youths shipped in from urban areas, she added.

‘It is a very violent business model, both for victims and between groups,’ she said.

He said: ‘I heard the most ridiculous thing recently that some drug dealers were claiming they had ethically sourced cocaine. There is nothing ethical about the production of cocaine.

‘Both nationally and internationally, people die as a result of it. We see people shot and stabbed all the time, we see turf wars in relation to drugs. We need to continue to target those individuals involved in violent criminality on the back of the drug trade more strongly than ever.’

He added: ‘People think that they have to go and buy vegan food or organic food, but they are quite happy to go and buy cocaine on the streets. It is just hypocritical and it is targeted at the middle-class drug user who should know better.’

Mr Cooke said forces should treat cannabis offending as seriously as other drugs.

‘We get more people shot and stabbed on the streets of Merseyside as a result of cannabis wars than other issues.’

Dame Carol Black’s review for the Home Office said a resurgence in crack cocaine use led to a rise in killings while the growth of county lines gangs has increased levels of violence.

The proportion of killings in London which are drug-related stands at 56 per cent, the report revealed, while in the north of England it is 42 per cent.

In the south, Midlands and Wales it is 37 per cent.