By Stacy Liberatore For Dailymail.com

China’s Chang’e 4 lunar lander has won the race to the dark side of the moon, allowing the country to be the first to uncover its secrets.

The craft, which landed on the moon in January 2019, deployed the Yutu-2 rover to investigate the Van Kármán crater near the moon’s south pole.

The device used a lunar penetrating radar to probe 131 feet beneath the surface in order to determine the moon’s ‘internal architecture’, which was found to consist of three distinct layers.

Researchers said the data information gathered rover, along with data from the previous near-side Moon explorations, could help shed light on the geological history of the lunar surface.

Scroll down for videos 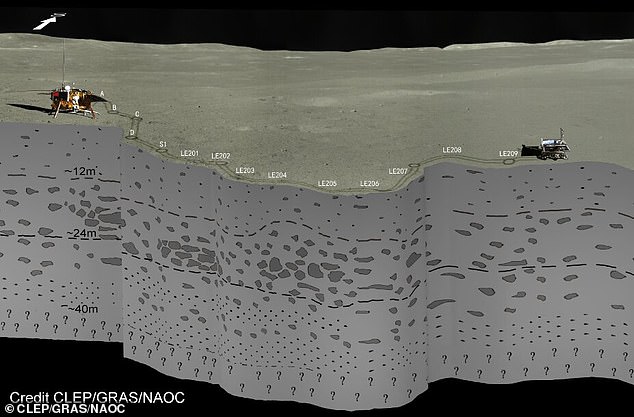 As most of the knowledge on lunar regolith comes from Nasa’s Apollo and the Soviet Union’s Luna missions to the near side of the Moon, scientists were, until now, uncertain whether these observations would hold true elsewhere on the lunar surface.

Dr Elena Pettinelli, a professor in the mathematics and physics department of Roma Tre University in Italy and one of the study authors, told the PA news agency: ‘These series of ejecta or deposits came from different impact craters that were created during the evolution of the Moon’s surface.

‘It is quite interesting because we can see quite clearly the geological sequences of these events 40 meters [131 feet] below the surface.’

The radar uncovered boulders hidden underneath in various sizes, along with porous, granular material. 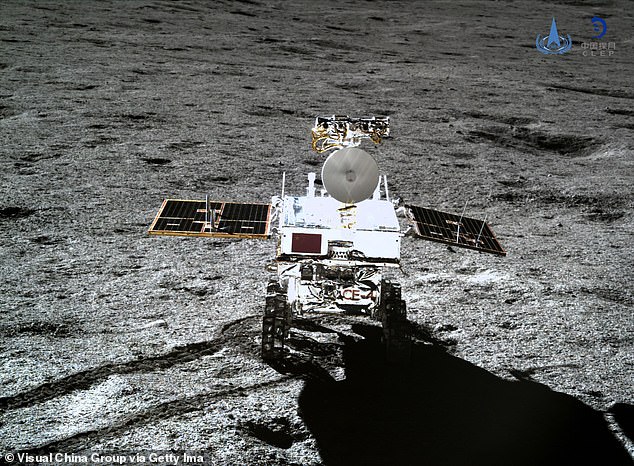 Yutu-2 (pictured), which can climb 20-degree hills and 8 inches tall obstacles, was deployed 12 hours later to explore the landing site. Previous landings have been on the near side of the Moon, which faces Earth 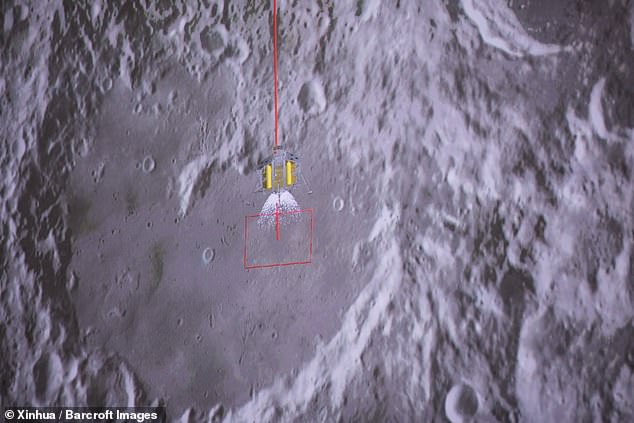 China’s Chang’e 4 landed on the moon in January 2019, and deployed the Yutu-2 rover to investigate the Van Kármán crater (pictured) near the moon’s south pole

Researchers believe these findings are due to meteors frequently hitting the moon during the early days of our Solar System.

The team also noted that the floor of Von Kármán crater is a smooth sheet of cooled lava from volcanic activity that occurred about 3.6 billion years ago -early astronomers believed these areas were bodies of water, not molten lava.

Its rover, Yutu-2, which can climb 20-degree hills and 8 inches tall obstacles, was deployed 12 hours later to explore the landing site.

Previous landings have been on the near side of the Moon, which faces Earth.

The far side, which cannot be seen because it faces away from Earth, has been observed many times from lunar orbits but never explored on the surface.

October 24 2007 – China launches Chang’e-1, an unmanned satellite, into space where it remains operational for more than a year.

October 1 2010 – China launches Chang’e-2. This was part of the first phase of the Chinese moon programme. It was in a 100-km-high lunar orbit to gather data for the upcoming Chang’e-3 mission.

May 20 2018 – China launched a relay satellite named Queqiao which is stationed in operational orbit about 40,000 miles beyond the moon. This is designed to enable Chang’e-4 to communicate wit engineers back on Earth.

December 7 2018 – Chinese space agency announces it has launched the Chang’e-4 probe into space.

December 12 2018 –  Retrorockets on the probe fired to stabilise the spacecraft and slow it down.

December 31 2018 –   The probe prepared for the first-ever soft landing on the far side of the moon.

Estimated for 2020 – Tiangong 3,a follow-up mission to the Tiangong-2

Before 2033 – China plans for its first uncrewed Mars exploration program.