Who’s a pretty scary boy then? Bob the parrot sharpens his beak then puffs up his feathers and struts menacingly towards his owner

This is the menacing moment a parrot appears embarrassed after being caught sharpening its beak by its owner, before stalking towards them in an intimidating manner.

Bob the Caique, a species of parrot, was filmed rubbing his beak against a wooden door.

Bob’s owner, who took the video in Fridley, Minnesota, USA, captured the parrot quickly moving his beak up and down on the surface before coming to a sudden halt. 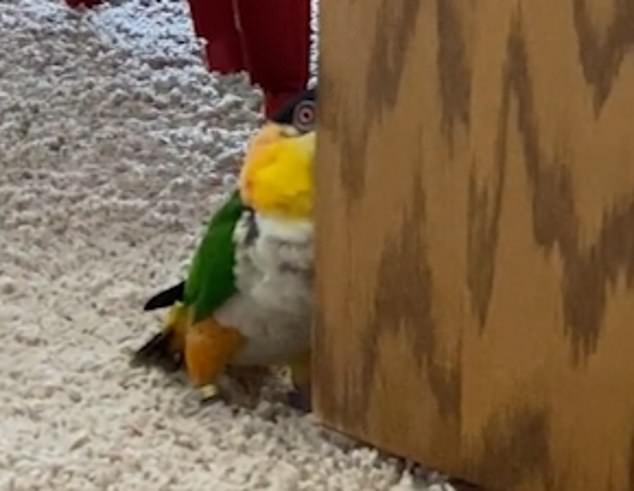 Bob the parrot realizes he’s been caught sharpening his beak by his owner and seems slightly embarrassed, before turning around to walk out of view behind the wooden door

After spotting his owner, Bob appears briefly embarrassed, walking out of sight behind the door.

But the caique then turns back around and struts towards the pet owner with his chest puffed out.

The parrot continues walking in a frightening manner towards the camera, while cocking his head to one side.

Social media users reacted to the footage, with one posting: ‘Run…’ 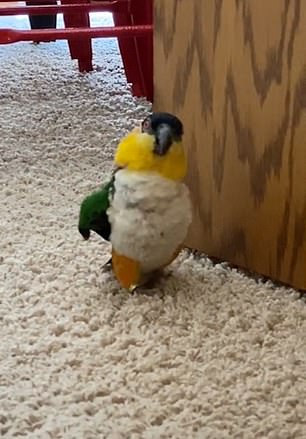 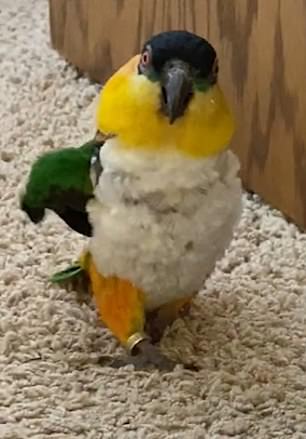 The caique pictured turning back around with his chest puffed out, before walking in an intimidating manner towards his owner in the hilarious footage

A third added: ‘His face when he realizes he’s busted’.

According to Rumble, the person who captured the hilarious video explained: ‘I caught Bob the Caique in some beak sharpening dance and I started taking video.

‘Needless to say, he looked embarrassed at first as he walked behind the door but then turned around and came back all puffed up and pissed off ready for action.’