Photographs of the day-to-day lives of allied airmen during the Second World War have been remastered and brought to life in stunning colour.

Striking 80-year-old images show an American mechanic balancing himself on shells while loading a 500lb bomb mid air; tense RAF paratroopers bracing themselves in the body of an Armstrong Whitworth Whitley aircraft; and a wounded US gunner being hauled out of the cockpit after suffering mid-flight injuries.

Another incredible photo shows a concerned crowd gathering around the wreckage of a Spitfire.

An undated photo shows an American mechanic working on the tail fuse of a AN-M64 ‘Carpetbagger’ general purpose 500lb bomb in the forward bomb bay of a Boeing B-29 Superfortress. The B-29 could carry 32 x 500lb GP Bombs 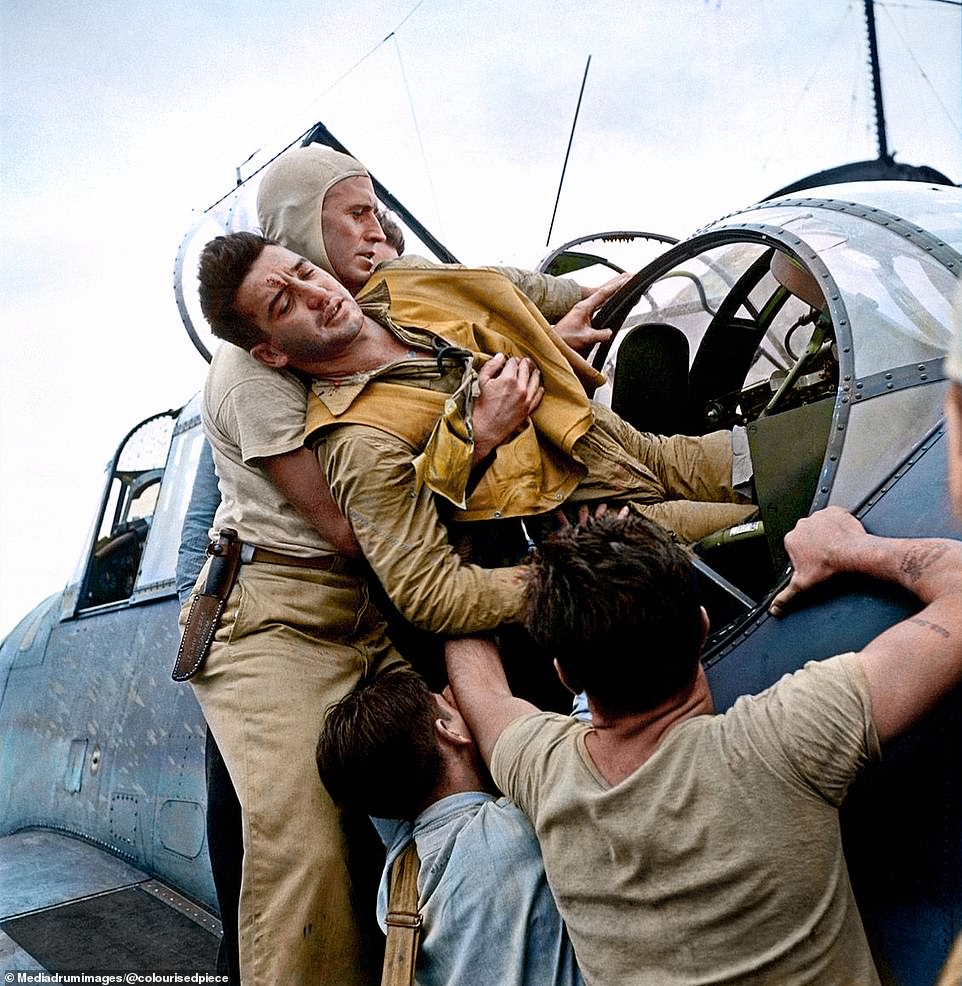 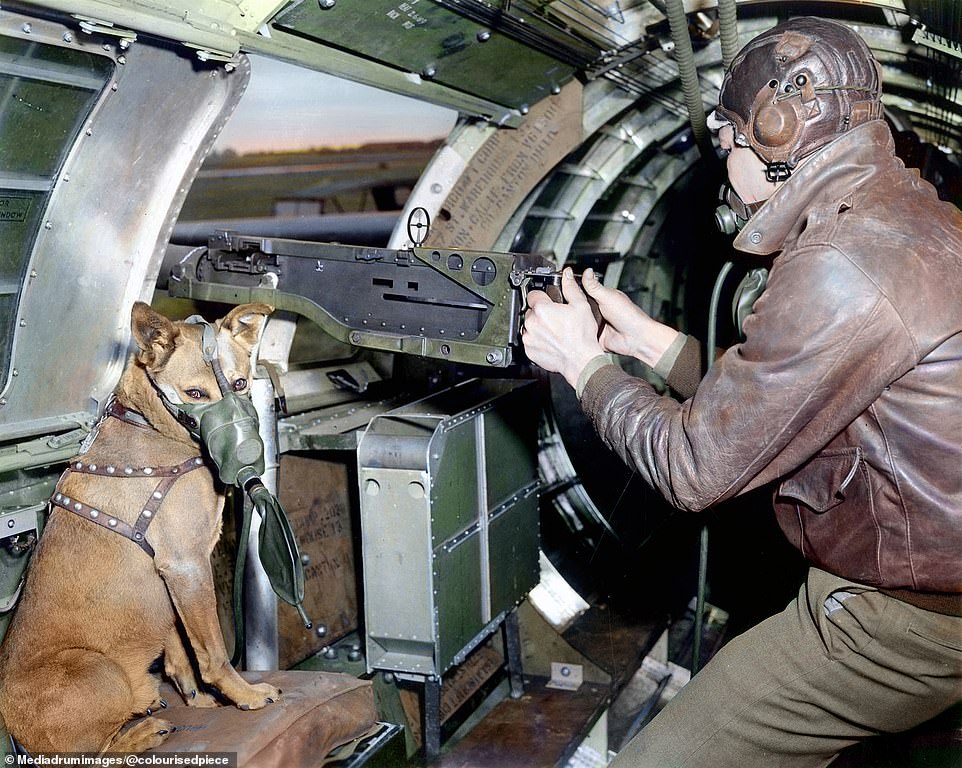 Sgt Harold E Rogers from Miami, Oklahoma, poses with his dog mascot ‘Mister’, half chow and half police hound, in the waist gun position of a B-17 Flying Fortress nicknamed ‘Un Petit Peu’ of the 401st Bomb Group, US Army 8th Air Force, just before a bombing mission over Germany

The colourisations were brought to life by colourist, Jake Laerbergh, from Deventer in the Netherlands.

‘I am always amazed, and even a little angry, by how little today’s youngsters know about World War Two – and some adults too,’ said Jake.

‘Our country was occupied and then liberated at huge cost and these actions need to be remembered.

‘Too many kids know very little about our history and it’s not something that’s high on the lists of schools nowadays. So, I thought, ‘what if we make it more appealing for them, more attractive and real?’. 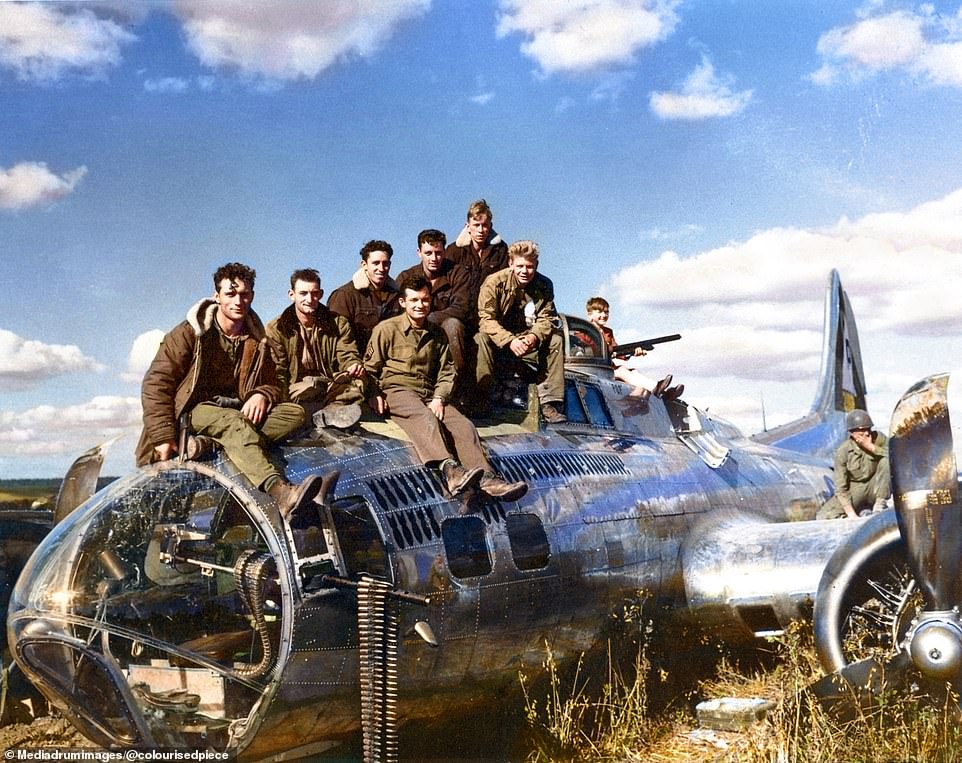 The crew of B-17G ‘Bolo Babe’ (42-102601) of the 546th Bomb Squadron, 384th BG, pose on top of their plane after a crash landing in France. Bolo Babe crash-landed near Moyeuvre-Grande, West of Thionville, France after she lost an engine and her electrical system during a mission to attack a BMW plant in Ludwigshafen Germany, 9 September, 1944. The entire crew returned to the UK by C-47 and returned to flight status on 13 September, 1944 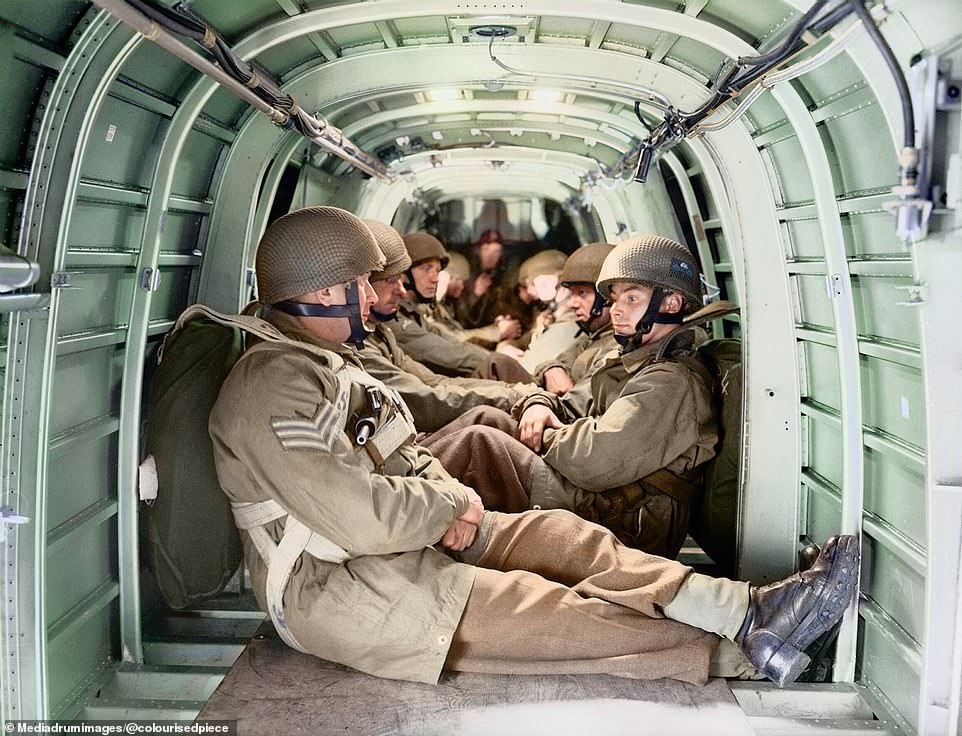 RAF paratroopers are pictured inside the fuselage of an Armstrong Whitworth Whitley aircraft during training at RAF Ringway, August 1942 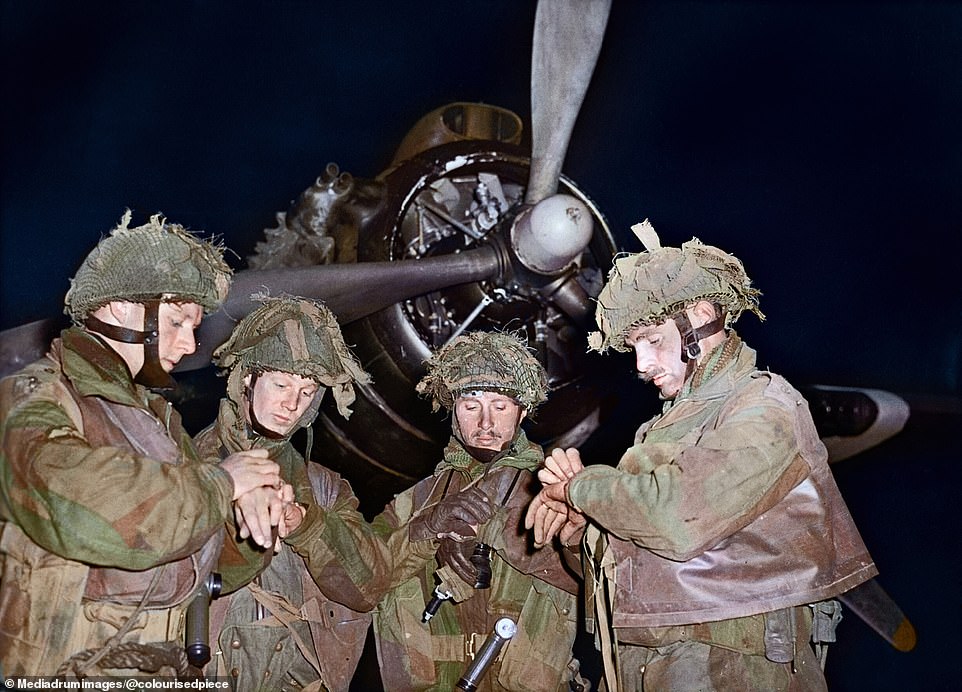 Diving into D-Day: This image from 5 June, 1944, entitled the Final Embarkation, shows four ‘stick’ commanders of 22nd Independent Parachute Company, British 6th Airborne Division, synchronising watches in front of an Armstrong Whitworth Albemarle of 295th Squadron, No 38 Group, Royal Air Force, at about 11.30pm on the 5 June, just prior to take off from RAF Harwell, Oxfordshire

‘Not the usual black and white stuff, no computer games which tell an inaccurate story, just real stories with real photos in colour which are as close to reality as humanly possible.

‘History is all about colour, you know.

‘The skies were just as blue back then as they are now.

‘I’d like to see how these significant events actually were and want come as close as I can with my colour impressions.

‘It’s highly addictive. Once I start on an image I can’t stop anymore. Especially when I put the first flesh tones in there.’ 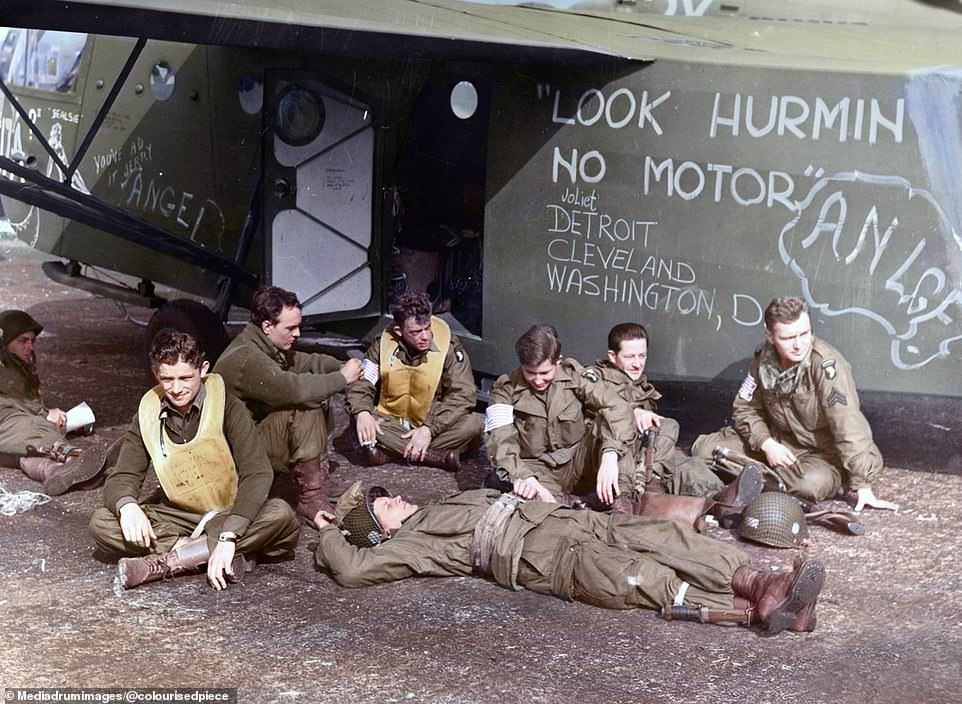 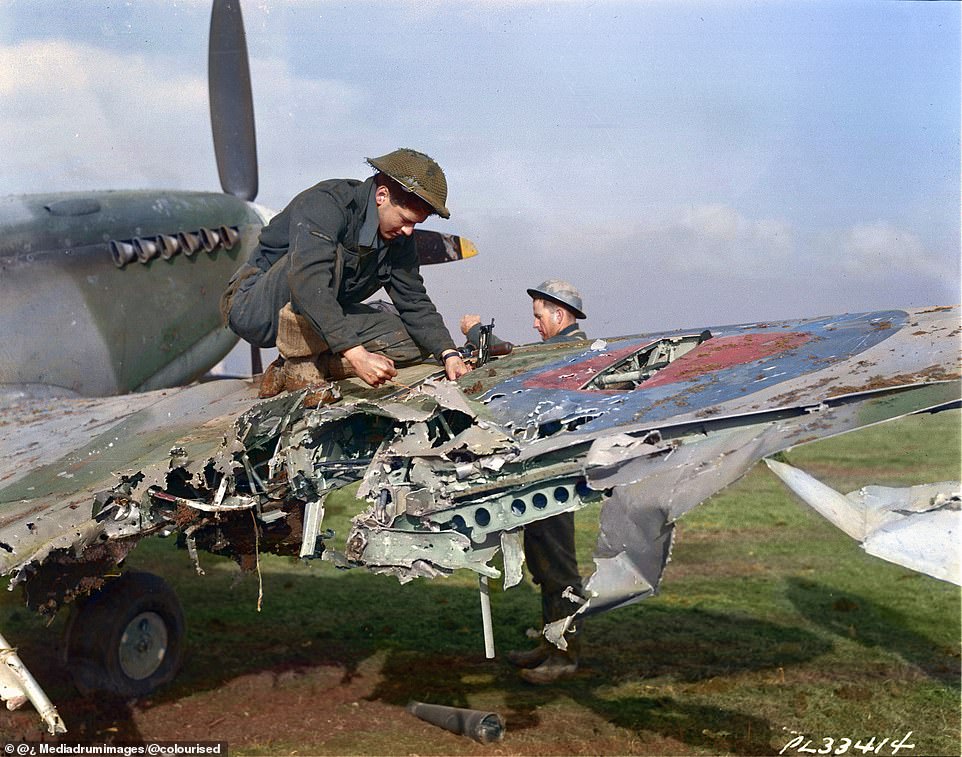 Leading Aircraftman RP Coulson removes the guns from a Canadian (RCAF) Spitfire which was heavily damaged while on the ground at Grave, Holland, in March 1945 when a Luftwaffe plane dropped a fragmentation bomb in a hit-and-run raid 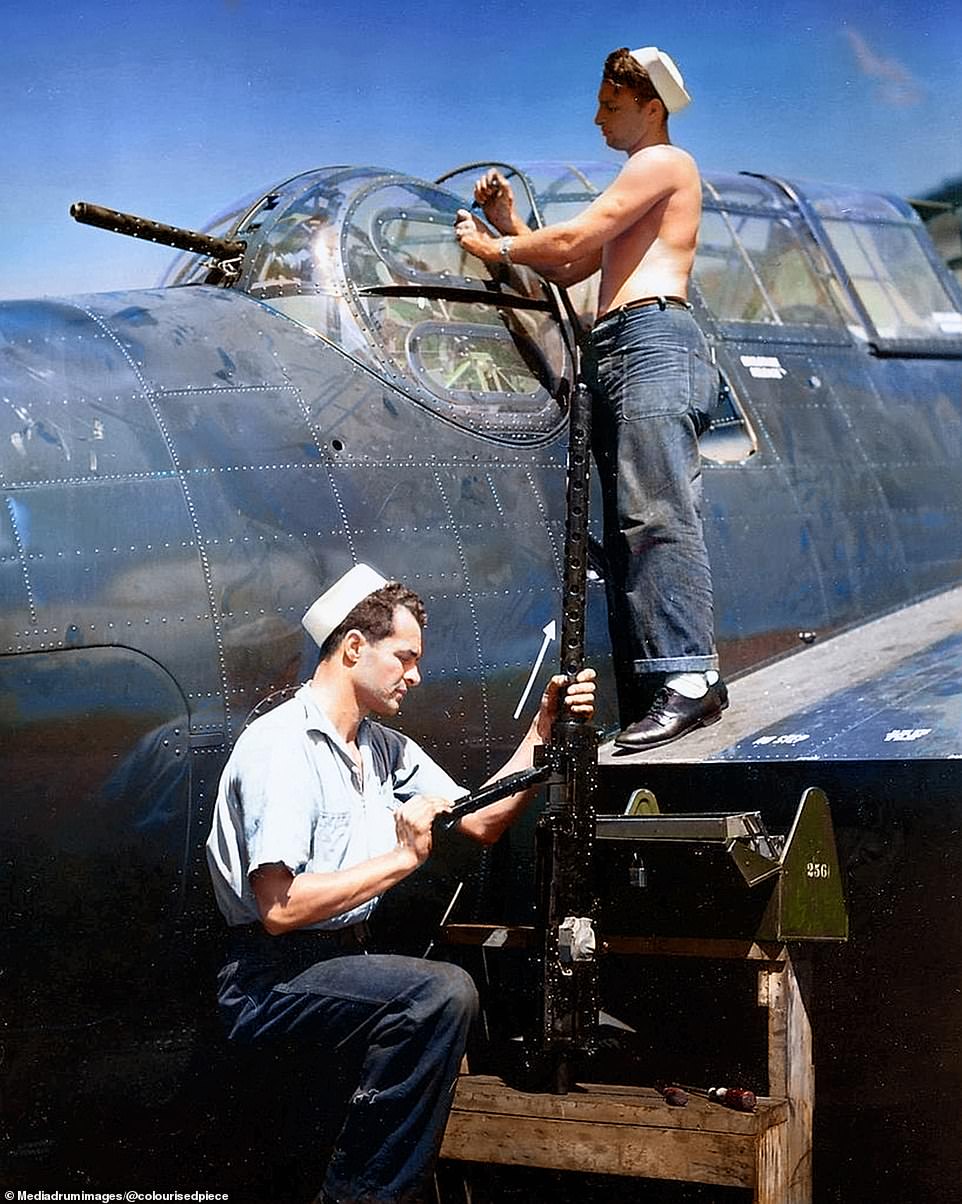 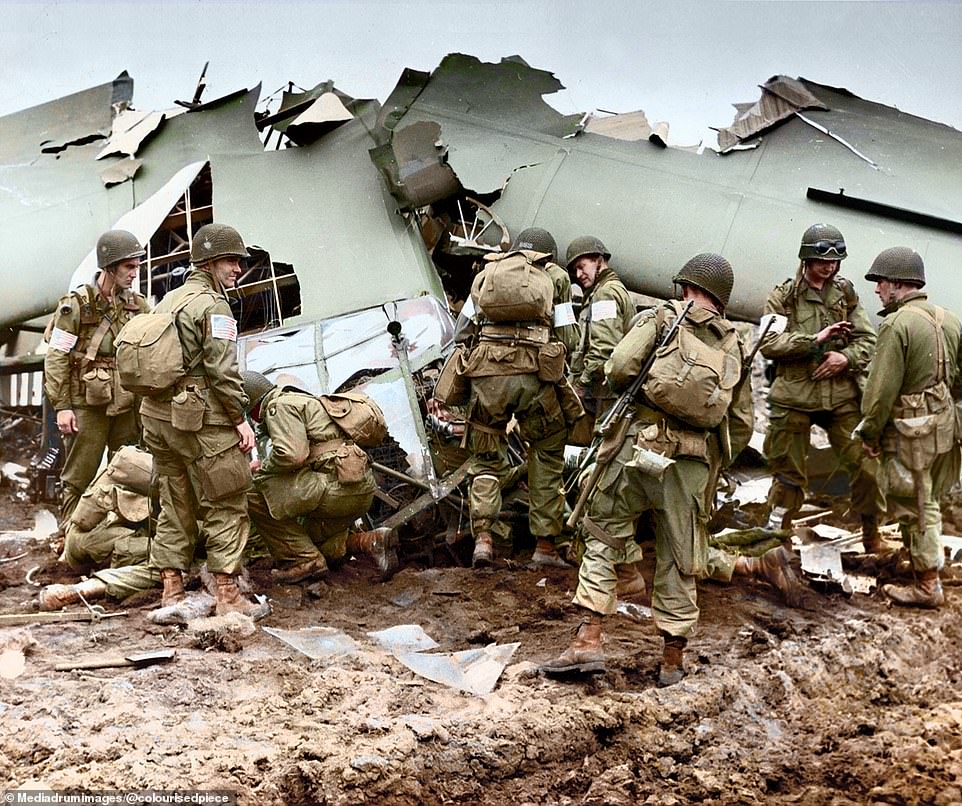 American Airborne Troops of the 101st Airborne Division (probably 501 PIR) that landed behind the German lines in the south of the Netherlands examine what is left of one of the gliders that had ‘cracked up’ on 18 September, 1944. The crash included fatalities

The first major attacks in World War II were made by German aircraft in the takeover of countries like Denmark, Poland, and the Netherlands. Later, Germany would attempt to destroy England’s Royal Air Force in the Battle of Britain.

During this battle, German planes dropped thousands of bombs on England for over three months. The Allies later countered with a major air and amphibious attack on D-Day during the Invasion of Normandy.

They launched around 14,000 sorties in one day. 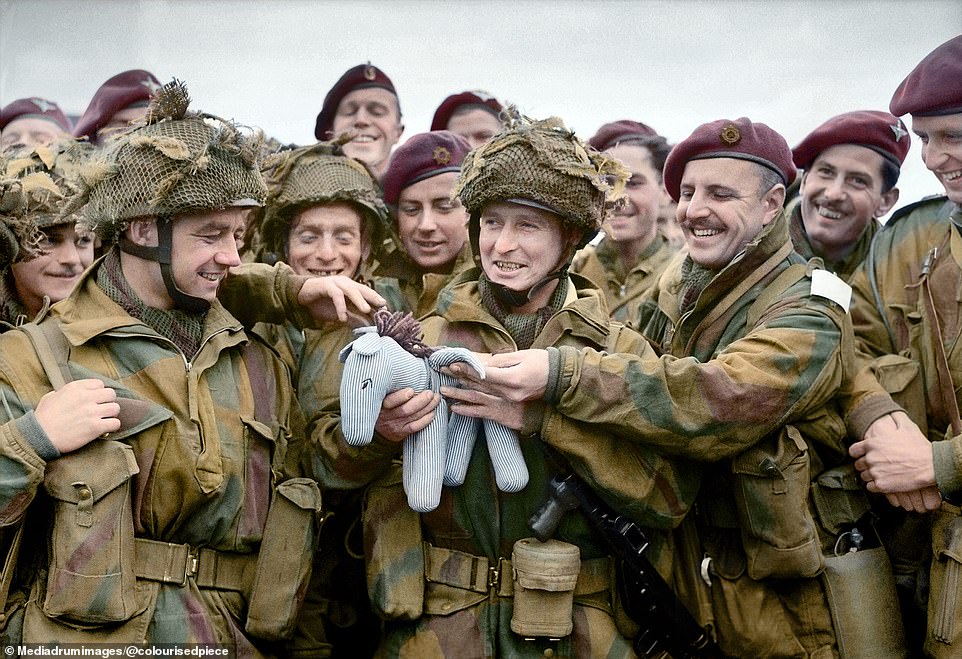 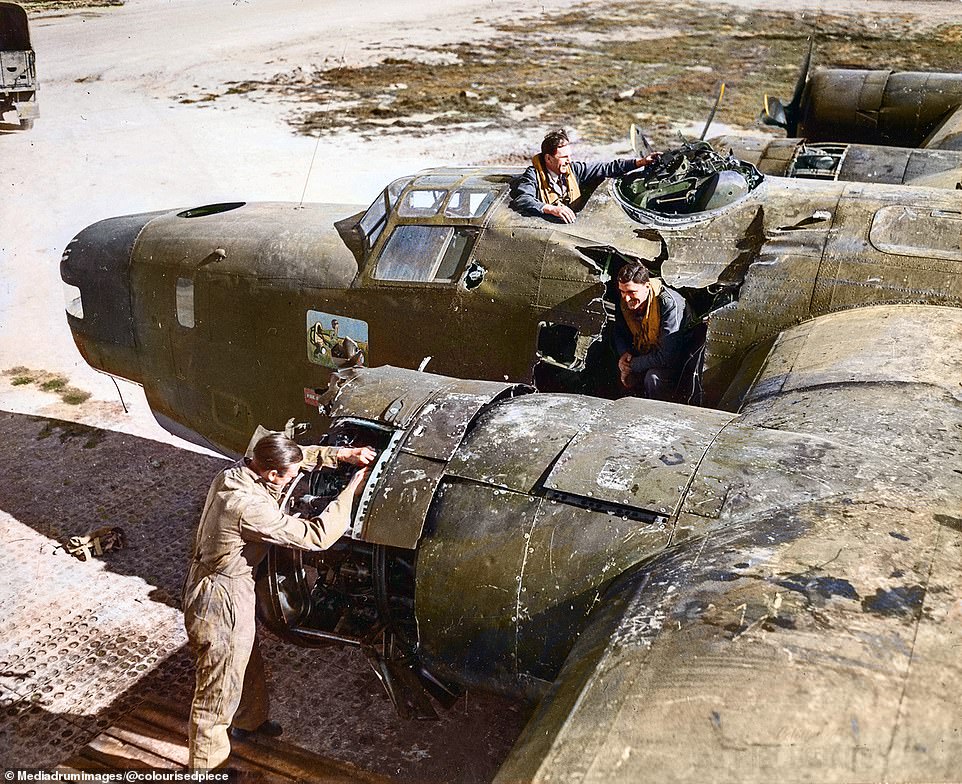 Pictured is an image of a Consolidated Liberator V Mark IV of RAF 70th squadron that was hit in friendly fire during a daylight raid on the shipbuilding yards of Monfalcone, Trieste, Italy, in 1945 .Although the bombs had not fallen far enough to become ‘live’, the perspex of Pilot Wally Lewis’s mid-upper turret was completely ripped away. Lewis later described the incident: ‘I was looking up and saw a bomb leave an aircraft above us. I saw it getting bigger and bigger as it came towards us. The next thing I realised was that the fuselage had been hit near the flight deck and I seemed to be pushed down in front of my seat. 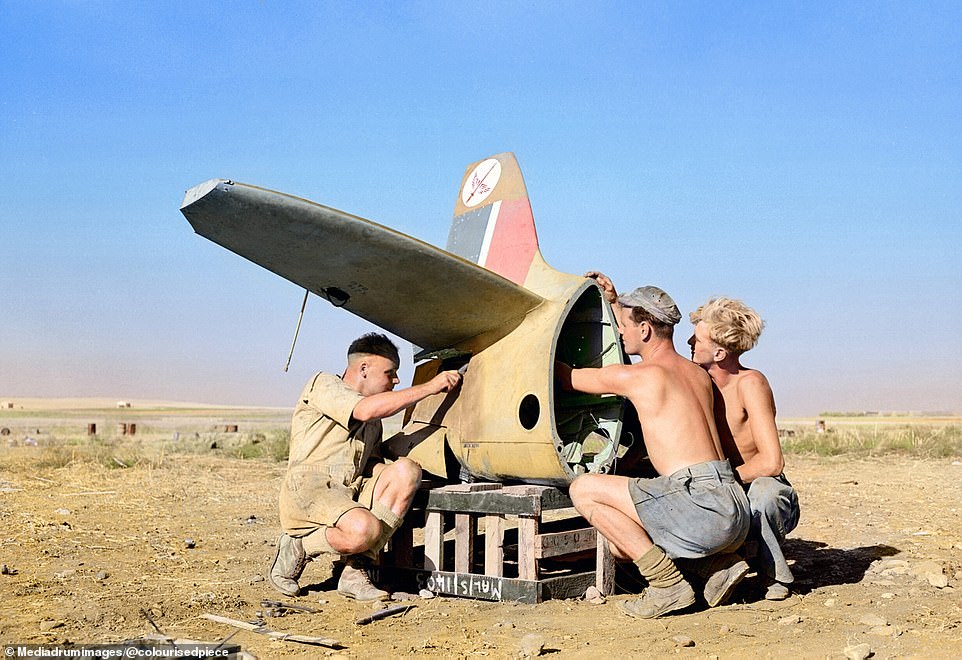 A party of riggers working on the tailplane of a Supermarine Spitfire of No. 601 Squadron RAF at Lentini West, September 1943, Sicily, Italy

There were also major air battles in the Pacific during World War II. The first major attack was when the Japanese bombed Pearl Harbour in 1941.

The final blow in the war was also struck by aircraft when atomic bombs were dropped on the Japanese cities of Hiroshima and Nagasaki.

Well over 75,000 planes were blown out of the sky during the war with countless fatalities.