This is the astonishing moment a fight breaks out at a supermarket inside the ‘red zone’ in Italy where 50,000 people have been placed in quarantine.

With food running low in the few shops that have remained open after the spread of the coronavirus, the two shoppers came to blows near the tills as a member of staff rushed forward to break up the scuffle.

The fight broke out at Lidl in the town of Casalpusterlengo, one of 10 towns in the Lombardy region that have been locked down to contain the virus.

Italian police are enforcing a two-week quarantine in an attempt to slow the Italian outbreak which is now spiralling across Europe. 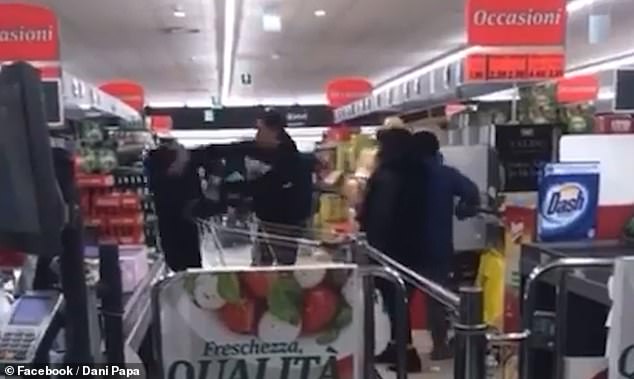 Scuffle: A fight broke out (pictured above) in a supermarket inside the ‘red zone’ in Italy where 50,000 people have been placed in quarantine 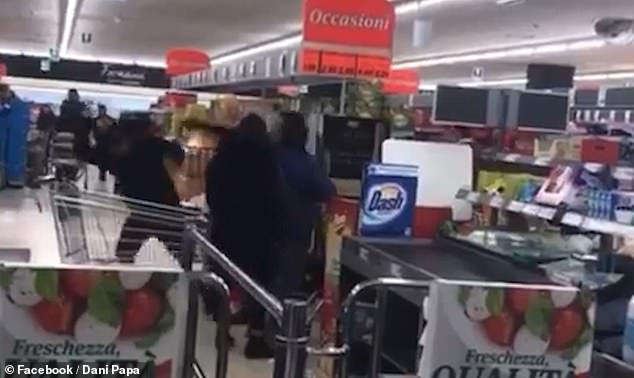 Coming to blows: The two shoppers fought each other near the tills as a member of staff rushed forward to break up the scuffle

Only supermarkets and pharmacies have remained open since the order was enforced at the weekend, with fears that food supplies are running short.

In the first few days after the regional government imposed the lockdown, shelves were stripped of pasta, tinned good and bottles of water.

Regular supplies are being sent in past police and army roadblocks – but that has not stopped panic buying from those trapped within the cordon.

Residents who attempt to leave face arrest and a three-month prison sentence.

Police have set up 24 hour road blocks several miles from the affected towns and stop all traffic from going in.

Only those with written permission are allowed to proceed.

A second layer of security on the outskirts of towns like Codogno – where the virus originated when a 38 year old man fell ill – is also in place and guarded day and night by the military.

In an attempt to keep residents happy a ‘no man’s land’ has been set up on the edge of each town.

Friends and relatives are allowed to bring supplies and place them in the middle of the road before being told to withdraw behind the blockade.

The resident is allowed to walk forward and pick up the food but guards ensure there is no human contact. 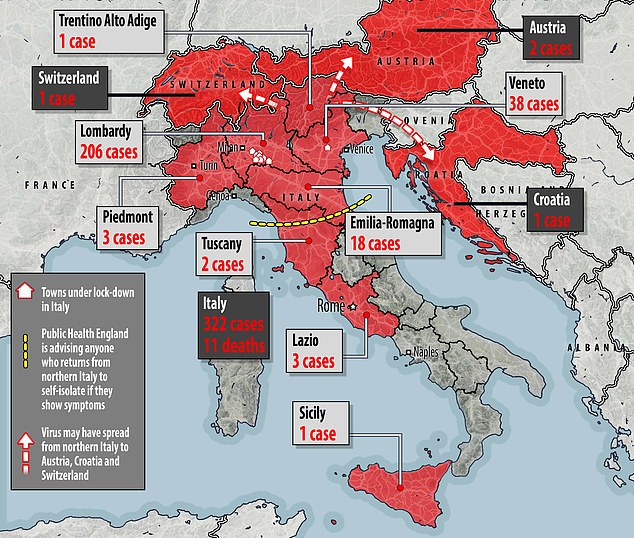 A map showing the scale of the coronavirus outbreak in Italy. Most of the cases are in the north, although a handful of patients have been diagnosed further south 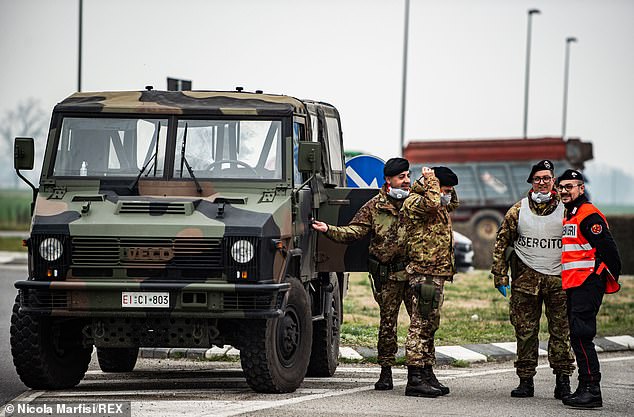 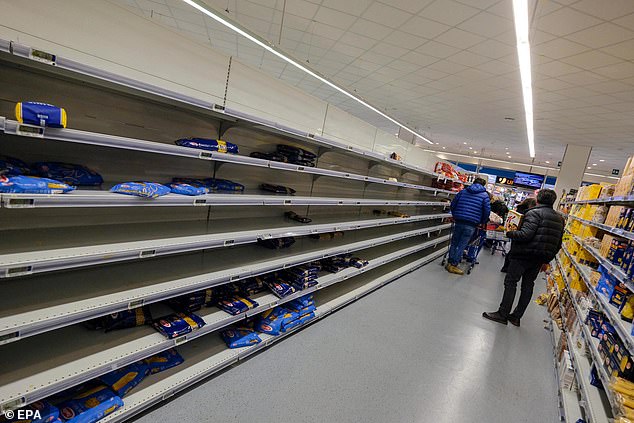 There were empty shelves at this supermarket in Palermo yesterday after the virus spread to southern Italy, prompting panic-buying

One local resident told local Italian media that they understood the need to enforce the quarantine but they biggest problem they faced was boredom.

Landscape artist Auro Michelon said: ‘I go up the asphalt road and reach the intersection, it is actually deserted!

‘But soon our dreams of freedom are broken, a small pickup truck from the municipality arrives slowly on the road with signs and barriers immediately behind a police patrol.

‘They get out and immediately ask me and two other farmers, ‘What are you doing here? You can’t be here!’. We immediately leave for fear of arrest.’

As Italy struggles to contain the coronavirus spread, authorities said a four-year-old child was undergoing tests to see if she had been infected.

The girl, who lives in the town of Castiglone, D’Adda, is now in isolation at her home while authorites wait to see if she develops the full symptoms.

She is understood to have been in the Codogno hospital where the outbreak first began.

The death toll stands at 11 with 322 others having tested positive.

The country’s Prime Minister Giuseppe Conte has appealed for calm and tired to re-assure the nation that the drasric preventative measures will help stem the spread of the virus.

The affected areas – mostly in Lombardy and one near Venice – have been designated red zones while surround towns are in the yellow zone.

All bars, restaurants must close by 6pm in all the zones as the authorities clamp down on any meeting place. 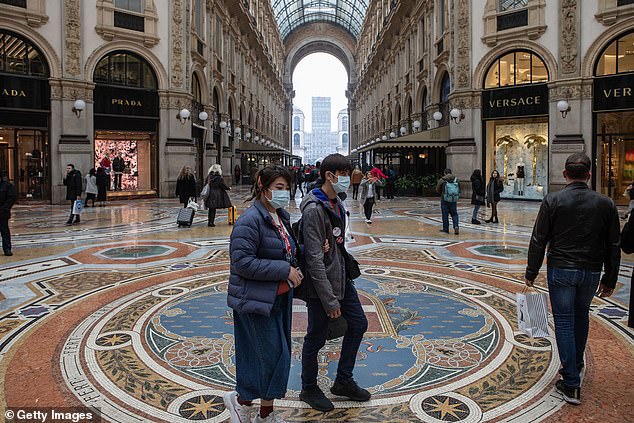 Two people wearing masks walk through the Galleria Vittorio Emanuele II in Milan yesterday, in northern Italy which is at the centre of the outbreak 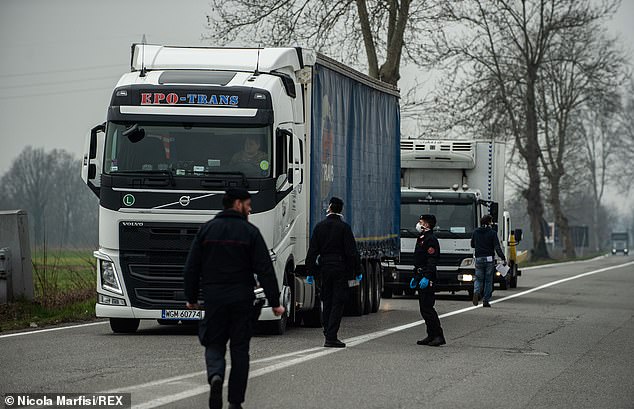 Meanwhile, the 38-year-old man who is said to be Italy’s ‘patient one’ is recovering in hospital.

Authorities believe he spread the virus when he checked into his local hospital, which has been criticised by Conte for the way they handled him when he reported sick.

Dozens of people are thought to have picked up the virus from within the Codogno hospital.

Patient 1’s pregnant wife has also tested positive for the virus and is in isolation at a separate hospital.

Authorities said the woman, a teacher who has not been named, was on maternity leave when she became infected and had not had contact with any of her students.