Millions of women are ‘fobbed off’ by GPs who fail to recognise menopause symptoms, a major survey suggests.

It found that one in four sufferers have to visit their doctor at least three times before getting appropriate treatment such as HRT.

Common symptoms such as anxiety and heart palpitations are frequently dismissed by GPs who may prescribe anti-depressants instead.

Campaigners say greater awareness of the condition would save the NHS millions of pounds in wasted prescriptions, GP appointments and tests.

The survey of 1,500 women by the website Mumsnet reveals that GPs are often reluctant to prescribe HRT, which has been hit by mass shortages.

Sarah Haselwood, 43, (pictured) visited her GP five times in three years with menopausal symptoms but was repeatedly brushed off

Around 13million women in the UK are menopausal, exposing them to anxiety, insomnia, palpitations, joint pain, poor memory, night sweats and hot flushes.

The average age for a woman to reach menopause – defined as when regular periods stop – is 51. But symptoms tend to begin several months or years before this, in a period known as the perimenopause, when levels of oestrogen and progesterone fluctuate.

Awareness of the perimenopause is particularly low, with one in four women told by doctors they couldn’t be perimenopausal because they were too young.

One woman who took part in the survey said: ‘The GP looked at me blankly when I mentioned perimenopause. She doesn’t appear to have heard of it. She tried to fob everything off as anxiety.’

The findings of the Mumsnet and Gransnet study, shared exclusively with the Mail, highlight the importance of greater awareness of menopause symptoms among patients and doctors.

Mumsnet founder Justine Roberts said: ‘Great strides have been made recently when it comes to the visibility of the menopause, with employers being urged to recognise its impact, and women becoming increasingly clued up about associated symptoms.

‘The next step is for perimenopausal symptoms to be more widely acknowledged. GPs are a crucial link in this chain, and our survey findings suggest GPs urgently need to receive adequate training to recognise and manage women’s symptoms.’

GP practices are being urged to display a poster displaying common symptoms – in a campaign backed by dozens of MPs and celebrities. 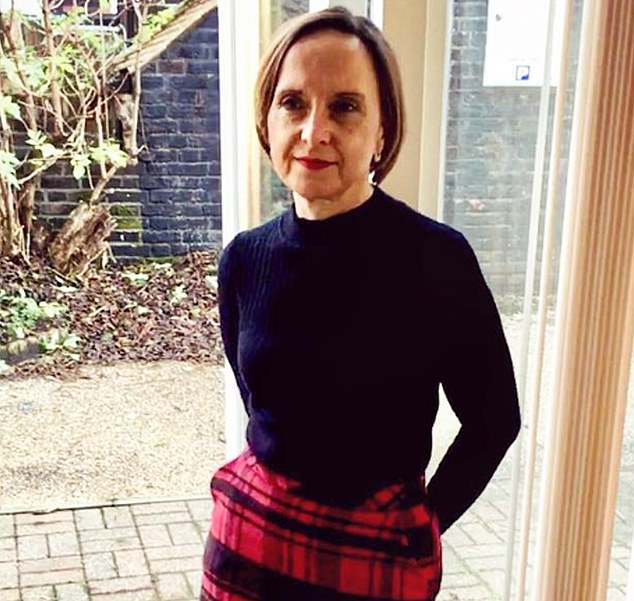 Elizabeth Carr-Ellis, 52, (pictured) launched the ‘Pausitivity’ campaign after it took three years for crippling symptoms including palpitations and hair loss to be diagnosed as the result of the menopause

Elizabeth Carr-Ellis, 52, launched the ‘Pausitivity’ campaign after it took three years for crippling symptoms including palpitations and hair loss to be diagnosed as the result of the menopause.

She said: ‘So many women spend years going back and forth to the doctors with individual symptoms, but no one joins the dots and realises it is because of the menopause.

‘A lot of women are told they just need anti-depressants, with no mention of HRT.

‘When I was waiting in my GP surgery I noticed there are dozens of posters for dementia, stroke, heart attacks and asthma.

‘But nothing for the menopause, despite the fact it hits 51 per cent of the population. Lots of people think the symptoms are just hot flushes but it is so much more than that. I decided that if the NHS aren’t going to give us a poster, I was going to do it myself.’

Professor Martin Marshall, who is chairman of the Royal College of GPs, said: ‘The menopause can be a very difficult time for some women and helping them to manage menopausal symptoms is something that GPs take seriously.

‘Perimenopause and menopause are both included in the RCGP curriculum, which all GP trainees need to demonstrate competence of to practise independently as a GP in the UK.

‘GPs will also undertake lifelong continuing professional development as part of their annual appraisal and have to demonstrate ongoing learning across the curriculum.’

My doctor would only prescribe me anti-depressants

Sarah Haselwood visited her GP five times in three years with menopausal symptoms but was repeatedly brushed off.

‘All they wanted to do was give me anti-depressants for my non-existent depression,’ she said. ‘They refused to accept it might be the perimenopause.’

In 2017, the mother-of-two became anxious, tired, forgetful and put on weight she could not shift.

The 43-year-old copywriter and blogger from Oxted in Surrey said: ‘I couldn’t cope with the symptoms, but when I went to the doctors they just said I sounded depressed. I felt like I couldn’t win and my concerns and symptoms were being dismissed.’

Last April Mrs Haselwood broke down in tears in her GP appointment but was told she was ‘too young’ to be menopausal.

She was eventually offered hormone tests, which came back normal – a common result during the perimenopause when hormone levels fluctuate.

Mrs Haselwood said: ‘My anxiety spiralled. I went back again last September, and almost before we had a conversation the GP had started writing a prescription for anti-depressants.’ Her symptoms have improved after she changed her diet and exercise regime on advice from online menopause support groups.

She added: ‘Not one doctor I saw mentioned the menopause, I was the one who had to bring it up.’

See here for the full results of the survey: