But unlike many other mega-rich men about town, you’ve probably never even heard his name.

Indeed such is the intrigue surrounding Jamie Reuben, son of Mumbai-born property magnate Simon, one half of the fabulously wealthy Rueben Brothers, that Tatler today dubbed the handsome 33-year-old ‘one of London’s most mysterious bachelors’.

Jamie, whose friends include Princess Beatrice and music mogul Scooter Braun, is following the lead of his father and uncle David, who famously don’t give interviews, preferring instead to allow their multi-million pound property deals to speak for themselves.

The Reuben Brothers, as they are most commonly known, built their estimated £18.6billion fortune by buying up large parts of London’s Mayfair, including the 200-year-old Burlington Arcade, of which Jamie is managing director.

However last week Jamie broke cover and offered a peek behind the curtain when he gave a sit-down to Times Magazine, in which he discussed plans to transform the stuffy stomping ground of wealthy financiers into somewhere a little trendier.

One of the centrepieces is the site of the former Naval and Military Club, popularly known as the In & Out club, which is being transformed into a hotel and seven luxury homes, described by Jamie as a ‘contemporary British country house oasis’.

Here, a look at what we know about the world of Jamie Reuben. 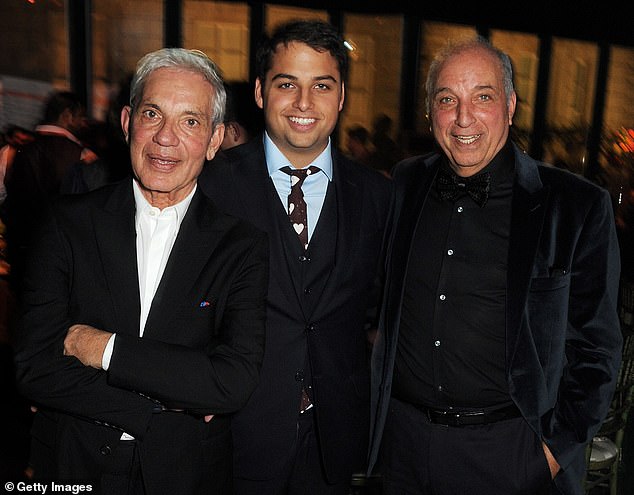 Runs in the family: Jamie Reuben, is the 33-year-old son of Simon Reuben, one half of the billionaire Reuben brothers. Pictured, Jamie with his father (left) and uncle David in 2013

The Reuben brothers’ wealth is staggering. Their shared personal fortune, estimated at over £18.6billion, is large enough to place the family at second place on The Sunday Times Rich List, ahead of more high profile businessmen like Sir James Dyson and Roman Abramovich.

This is largely due to their real estate holdings, which include Mayfair’s Burlington Arcade and Westminster’s Millbank Tower. They also own London Oxford Airport and London Heliport and the John Lewis headquarters at London Victoria.

The Reuben Brothers continue to be one of the largest investors in luxury leisure group Belmond Ltd. Other holdings include Travelodge Hotels.

However they started off with more modest business ventures. Simon and David were born in Mumbai, India, and came to Britain in the Fifties with their mother, Nancy.

After starting his career at Mount Star Metals, a UK-based scrap-metals business, David joined Trans-Continental, a subsidiary of Metal Traders Inc. In 1977 he left that firm and formed Trans-World Group, and in 1986, along with his brother, Simon, he restructured the firm, bought out his partners, and took control of the business.

In 2000 the brothers wound down Trans-World’s operations to sharpen their focus on Reuben Brothers’ activities. 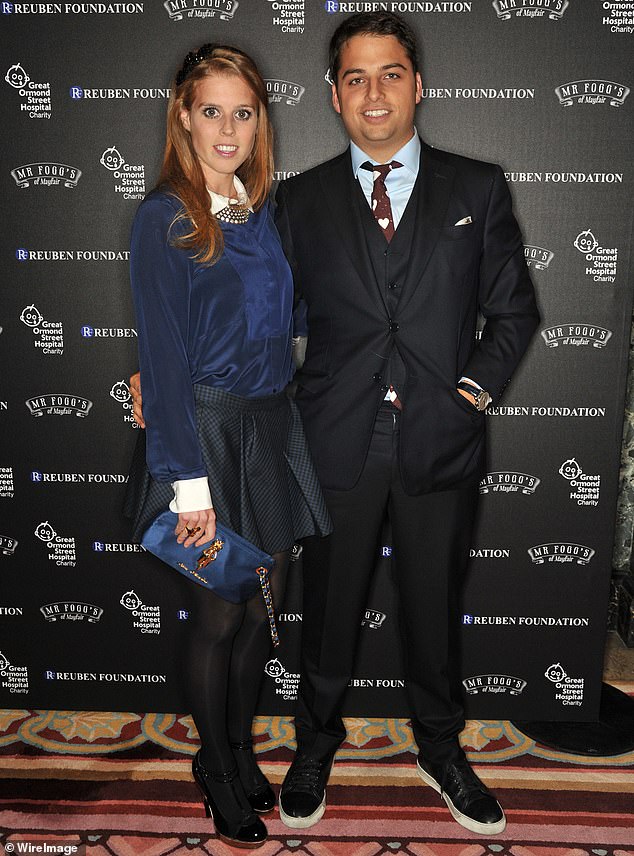 Old friends: Like many well-connected 30-somethings in London, Jamie counts a member of the royal family among his circle of friends. Pictured, with Princess Beatrice in 2013 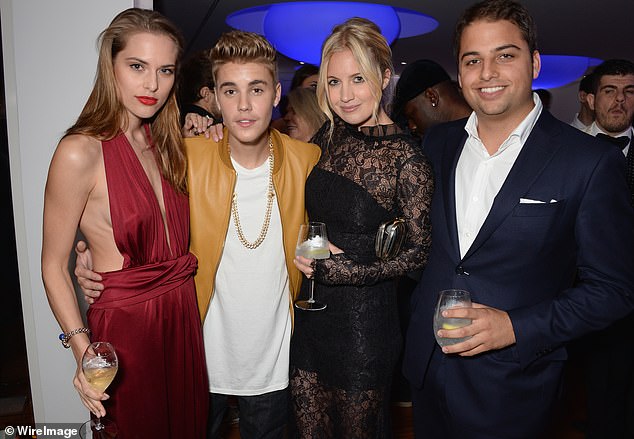 Showbiz: Another friend is American music mogul Scooter Braun, whose clients include Justin Bieber and Ariana Grande. Jamie and Justin looked like close friends as they posed for photos at the Vanity Fair party at the Cannes Film Festival last year, pictured

Like many well-connected 30-somethings in London, Jamie counts a member of the royal family among his circle of friends.

He and Princess Beatrice, 31, described in the press as an ‘old friend’ have been spotted together at a number of parties over the years and sat side-by-side at the US Open in 2013. They most recently rubbed shoulders at an event in November last year. It remains to be seen if he will be invited to Beatrice and Edo’s wedding in May.

Another friend is American music mogul Scooter Braun, whose clients include Justin Bieber and Ariana Grande. Jamie and Justin looked like close friends as they posed for photos at the Vanity Fair party at the Cannes Film Festival last year.

According to The Times, Jamie has also become friends with former Google CEO Eric Schmidt, whom he is said to have met through a friend. 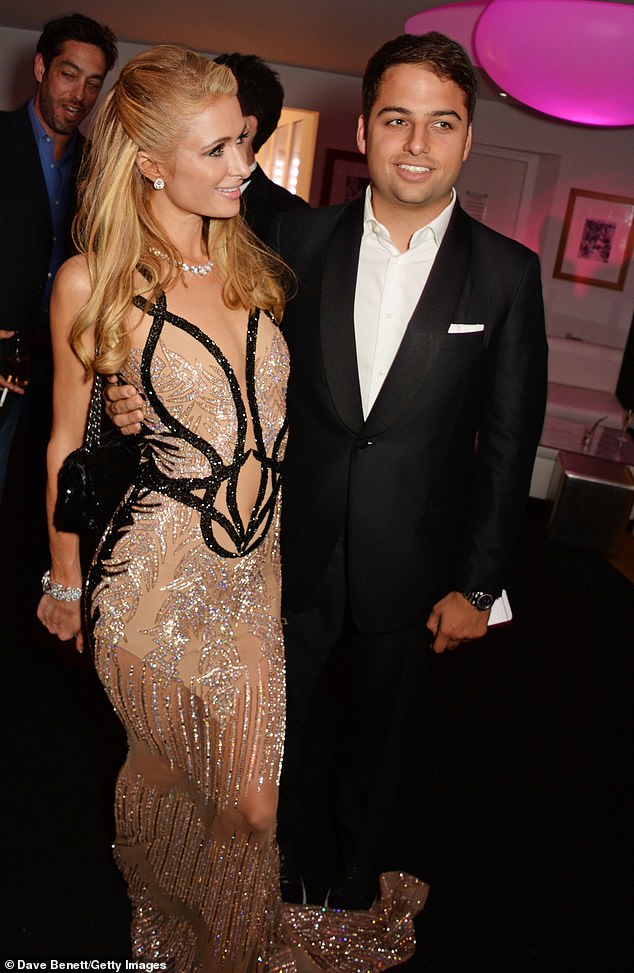 Star-studded: Jamie with Paris Hilton at a glittering Cannes Film Festival party in May 2016 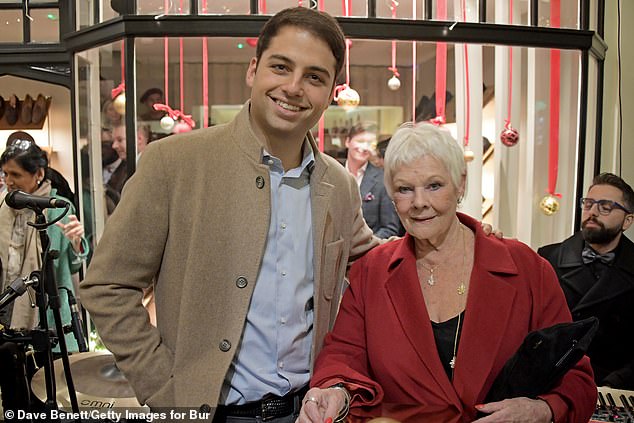 Jamie was front and centre for a party hosted by his father and uncle at a party celebrating the 200th Christmas at the Burlington Arcade in November last year. Pictured, with Judi Dench

While the Reubens prefer to stay out of the glare of the public eye, Jamie does occasionally make exceptions for star-studded parties.

In 2013 Reuben showed his support for Schmidt by hosting a launch party for his book The New Digital Age, co-written by Jared Cohen.

Among the guests at the event was Dasha Zhukova, the ex-wife of Roman Abramovich who recently tied the knot with Stavros Niarchos, Princess Beatrice’s ex-boyfriend Dave Clark and Sir Richard Branson’s daughter, Holly Branson.

He brought out his phone book again last year to host a black tie bash at the Cannes Film Festival, where he posed with Bahamian model Chase Carter, 22.

That same month Jamie was front and centre for a party hosted by his father and uncle at a party celebrating the 200th anniversary of the Burlington Arcade.

Princess Beatrice, then newly engaged, looked elegant in a shift dress as she posed for photos with the likes of Sir Michael Caine and Lady Alice Manners. 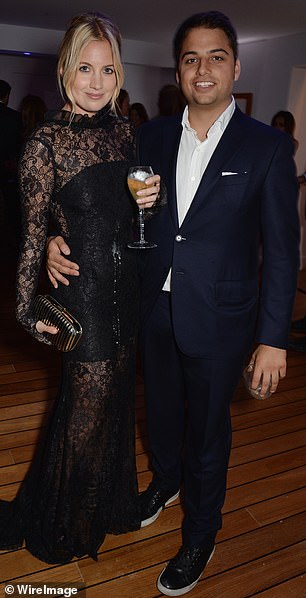 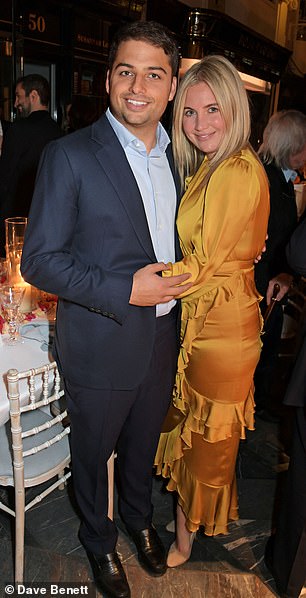 Jamie Reuben enjoyed a long-term relationship with TV presenter and fashion designer, Marissa Montgomery. It is not known when their relationship came to an end but the couple were seen together as recently as May last year (right). Pictured left, at Cannes in 2014

The couple, who share many of the same friends, were spotted attending parties as far back as 2008, with Jamie planting a kiss on his blonde date’s cheek as they posed for photos at an Evening Standard event.

It is not known when their relationship came to an end but the couple were seen together as recently as November, when they both attended the Burlington Arcade anniversary party.

At the age of 21, Marissa founded lingerie line Pussy Glamore, following it up in 2014 with trendy t-shirt label Rotten Roach, now available to buy at Selfridges. 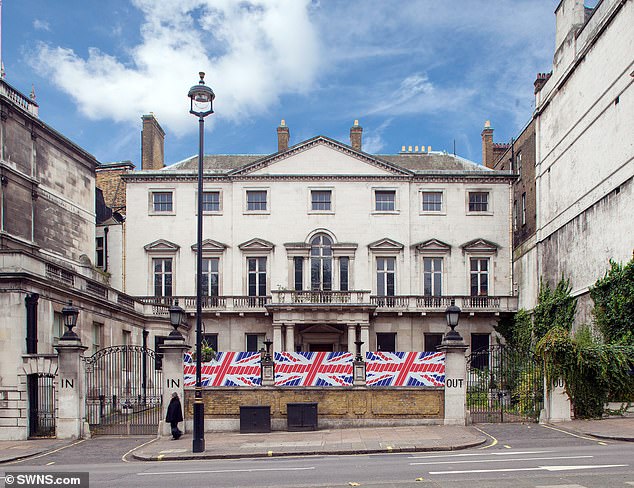 Ongoing project: The Reubens have several projects in the pipeline but perhaps the one that has made most headlines is the old premises of the Naval and Military Club, pictured, which will now be turned into a hotel and seven luxury homes. It was bought in 2011

The Reubens have several projects in the pipeline but perhaps the one that has made most headlines is the old premises of the Naval and Military Club, popularly known as The In & Out after the prominent inscriptions at the entrance to its Piccadilly courtyard.

Once one of London’s most magnificent houses, the Reubens shelled out an estimated £100 million for the building in 2011, initially intending to convert it into Britain’s most expensive private house, with an underground swimming pool, gym, 35,000-bottle cellar — and a possible £200 million price tag.

The brothers had a change of heart last year, deciding instead to turn the property into a 102-bedroom luxury hotel and seven high-end homes, on what they want to call the ‘Piccadilly Estate’.

‘It will be a contemporary British country house oasis in the middle of Mayfair,’ Jamie said in his interview with Times Magazine.

The businessman also spoke of wanting to breathe fresh life into Mayfair, saying he has the perspective to see beyond his father and uncle’s ‘safe’ and ‘traditional’ ideas.

He added: ‘Because I’m younger, I can see things changing and I can see different ideas probably being more relevant going forward.’