Just one full-fat fizzy drink a day in middle-age may increase the risk of a heart attack or stroke, according to new research.

The sugar-laden beverages send cholesterol levels soaring – increasing the risk of clots that cut off blood supply to the heart or brain.

Researchers from Tufts University in Massachusetts studied almost 6,000 over 40s and found daily drinkers were twice as prone to low levels of good cholesterol. 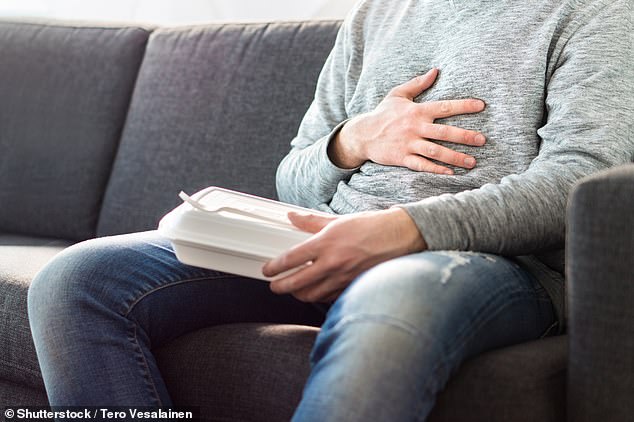 The group were also 53 per cent more likely to have large amounts of another bad fat called triglycerides that collects in vessels and arteries.

This was compared to those who rarely touched sugary soda, juice or energy drinks.

An estimated six in 10 people have raised levels of cholesterol or triglycerides, a condition known as dyslipidemia.

WHAT ARE THE DANGERS LINKED TO SWEETENED DRINKS?

Drinking large amounts of sugar in drinks such as pop, soda and juices can lead to serious health problems, including weight gain, tooth decay and diabetes.

Some drinks contain upwards of 40 grams of sugar—equivalent to about 10 teaspoons of sugar—and 200 or more calories in a 12-ounce serving.

The NHS says more than 20 per cent of the added sugar in adult diets comes from soft drinks and fruit juice — and as much as a third for children aged between 11 and 18.

Researchers at Oxford University calculated the impact the Government’s sugar tax levy, introduced in April 2018, would have on obesity in the UK.

They found obesity would drop by 9.8 per cent in children aged four to ten.

In March, Harvard School of Public Health concluded that as well as weight gain, diabetes, heart disease and stroke, the more sugary drinks a person consumed the more their risk of early death from any cause increased. The link with heart disease was particularly strong.

The study, in the journal Circulation, looked at 117,000 Americans over three decades. Those who drank two or more cans of sugary drinks a day had a 31 per cent higher risk of early death from cardiovascular disease — and each further drink was linked with an astonishing 10 per cent increased risk.

Researchers at the Meyer Cancer Centre at Weill Cornell medical school, US, have announced they are starting to assess whether sugar ‘feeds cancer’.

Sweetened soft drinks – such as cordial or fizzy pop – increases cancer risk by 19 per cent, according to a study conducted by researchers from the Paris 13 University, Avicenne Hospital and The French Public Health Agency in July.

The researchers could not be clear if sugary drinks are directly causing the increase in risk. The sugary drinks may lead to obesity which is a well-known risk factor for various types of cancer. 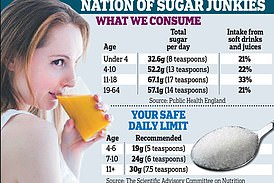 Experts have long debated whether sweeteners, which include aspartame, saccharin and sucralose, are safe.

Studies have linked consumption of them through foods and diet drinks to diabetes, weight gain and cancer.

In  February, research by the American Heart Association and American Stroke Association found two cans of sugar-free fizzy drinks per day could increase a woman’s risk of a heart attack or stroke by almost a third.

Another study in February, published in the journal Environmental Science and Pollution Research International, looked the effects of artificial sweeteners on mouse embryos.

Another study, published in the journal Metabolic Brain Disease in May, raised concerns about the impact of sweeteners on brain development.

It has been dubbed a ‘silent killer’ as many are unaware until they suffer a stroke or heart attack.

It affects roughly half of American adults while the UK’s average cholesterol rate is considered ‘too high,’ averaging 5.7 millimoles per litre of blood.

Corresponding author Professor Nicola McKeown, a nutritionist at Tufts University in Massachusetts, said: ‘The results suggest high intake of drinks with added sugar, such as soda, lemonade or fruit punch, may influence risk for dyslipidemia as we age.

‘One dietary strategy to help maintain healthier blood cholesterol and triglyceride levels may be to avoid drinks with added sugars.’

First author Danielle Haslam added: ‘Our findings contribute to the mounting evidence that sugary drinks should be avoided to help maintain long-term health.’

Cardiovascular disease is the UK’s number one killer, claiming 170,000 lives a year. It affects around seven million Britons, and is responsible for one in four premature deaths.

The study analysed data from more than 5,900 middle aged and older US residents who were tracked for about 12 years.

High consumption of sugary beverages was linked to good HDL cholesterol and triglyceride levels that, measured every four years, were ‘moving in the wrong direction.’

This remained the case even for the youngest participants who were still in their 40s, said first author Dr Danielle Haslam – who is based in the same lab.

She said: ‘With these younger participants, we did see unfavourable changes, but they were likely too young during the short follow-up period to know if they would eventually develop dyslipidemia.

‘Our findings contribute to the mounting evidence that sugary drinks should be avoided to help maintain long-term health.’

Adults who drank at least one sugary beverage daily four years before an assessment of blood fats or lipids were 98 and 53 percent more likely to have low good cholesterol and high triglycerides, respectively.

The researchers observed similar results when they examined long-term intakes of the drinks throughout the 12-year study period.

The researchers also studied 100% fruit juice and diet drinks, common replacements for sugar-sweetened beverages, but found no consistent associations with adverse changes in cholesterol and increased risk of dyslipidemia.

But they still urge moderation.

Prof McKeown said: ‘We are better off quenching our thirst with water. The emerging research on long-term consumption of diet soda on health is inconclusive, so it’s prudent to say diet drinks should only be an occasional indulgence.

‘As for 100% fruit juice, best to limit consumption and consume whole fruits when possible, as recommended by the 2015-2020 Dietary Guidelines for Americans.’

She added: ‘Our findings show what we put in our glass may contribute to greater risk of cardiovascular disease via worsening of lipid levels.

‘Managing blood cholesterol and triglyceride levels is an important goal and a promising strategy for preventing heart attack and stroke.’

As expected and consistent with previous research, sugary beverage consumption was not linked to an increased risk of higher bad cholesterol.

Changes in blood cholesterol and triglyceride concentrations were compared between exams. Participants self-reported the types and frequency of beverages they consumed.

They were members of the Framingham Heart Study, which has monitored multiple generations living in the Massachusetts town to identify contributors to cardiovascular disease.

The researchers took into account other factors known to influence cholesterol and triglyceride concentrations such as obesity, overall diet quality, physical activity, alcohol intake and the use of cholesterol-lowering drugs.

Deaths from heart and circulatory diseases among people under 75 are on the rise for the first time in 50 years.

The charity says the historic pace of progress in reducing these deaths ‘has slowed to a near standstill’.

Fizzy drinks have been linked to a host of other chronic conditions including cancer, diabetes and liver damage.