By Stephen Delahunty For Mailonline and Afp

German lawmakers have overturned an earlier ban on assisted suicide in a landmark ruling at the country’s top court.

Church leaders are alarmed at the decision as they fear it will pressure elderly or sick people into accessing assisted suicide services.

The milestone decision raised eyebrows by explicitly stating that people have ‘the right to a self-determined death’, and that the right to assisted suicide services should not be limited to the seriously or incurably ill.

It is also ‘guaranteed in all stages of a person’s existence’.

The verdict is a major victory for terminally ill patients, doctors and assisted suicide organisations who brought the case, complaining that the existing law went too far.

Judge Andreas Vosskuhle at the Federal Constitutional Court in Karlsruhe said the right to a self-determined death included ‘the freedom to take one’s life and seek help doing so’.

In a joint statement, the German Bishops’ Conference and the Evangelical Church of Germany said they feared elderly or sick people would feel ‘internal or external pressure’ to make use of assisted suicide services.

It is a sensitive subject in Germany as the Nazis used what they euphemistically called ‘euthanasia’ to exterminate around 200,000 disabled people.

The existing law, known as Paragraph 17, was passed in 2015 and aimed at barring associations dedicated to helping patients wanting to die. 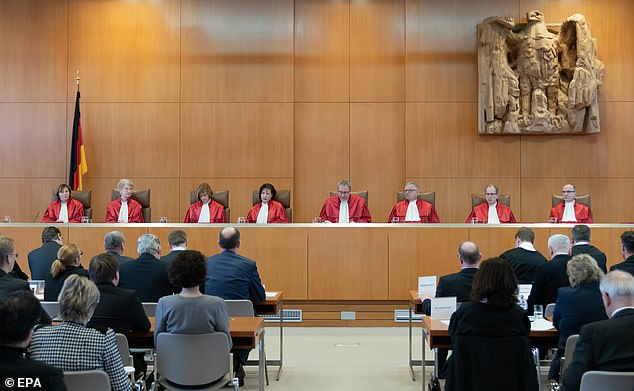 In 2017, a lower court ruled that officials could not refuse lethal medication in extreme cases, creating confusion among doctors.

The plaintiffs’ argued that Germany’s constitution guarantees personal freedom and dignity, which they said includes the right to choose when and how to die.

The court agreed, and found the restrictions imposed by Paragraph 217 made it ‘impossible’ for people to receive help from third party professionals in Germany, who faced a fine or up to three years in prison under then old law.

This left German patients turning to family members or loved ones for help, some getting life-terminating medicine from abroad.

Judge Vosskuhle said those who wanted to offer suicide assistance must be legally allowed to, without however being forced to do so. 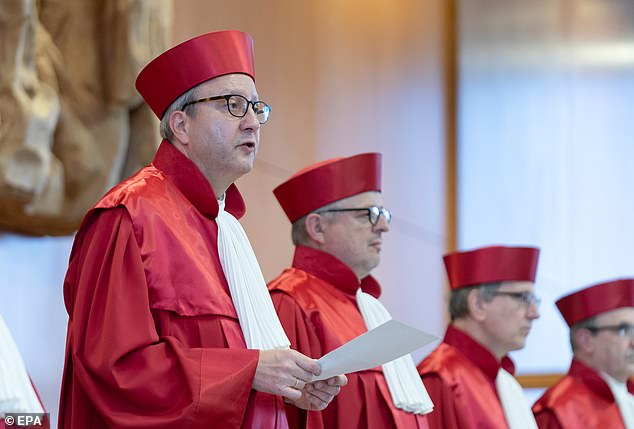 Presiding judge, Andreas Vosskuhle, is flanked by members of the senate as he announces the court’s controversial verdict

The court stressed however that legislators still had ‘a broad spectrum’ of options to regulate assisted suicide, for instance through mandatory waiting periods or consumer protection standards for assisted suicide associations.

The German government plans to study the court’s verdict ‘very closely’ before deciding the next course of action.

Judge Vosskuhle said the decision of those wishing to end their lives had to be respected but admitted that the ruling would not please everyone.

‘We may regret their decision and try everything we can do change their minds but ultimately we must accept their freedom to choose,’ he said.

The German Medical Association had also opposed any relaxing of Paragraph 217, warning it could open the door to euthanasia, where doctors take an active role in helping a patient die, for instance through lethal injection.

Where is assisted dying legal in Europe and the US?

Assisted dying refers to both voluntary active euthanasia and physician-assisted death. These two types of assisted dying distinguish a difference in the degree of the doctor’s involvement.Only three countries in Europe approve of assisted dying as a whole: Belgium, the Netherlands, and Luxembourg.The first two even recognise requests from minors under strict circumstances, while Luxembourg excludes them from the legislation.Switzerland, Germany, Finland, and Austria allow physician-assisted death under specific scenarios.Countries such as Spain, Sweden, England, Italy, Hungary, and Norway allow passive euthanasia under strict circumstances.Passive euthanasia is when a patient suffers from an incurable disease and decides not to apply life-prolonging treatments, such as artificial nutrition or hydration.Physician-assisted suicide is legal in seven US states and the District of Columbia. It is an option given to individuals by law in the District of Columbia, Hawaii, Oregon, Vermont and Washington. It is an option given to individuals in Montana via court decision.