Nick Grimshaw has had to miss out on the second day of Sport Relief’s latest celebrity challenge due to heat exhaustion.

The radio DJ has succumbed to the extreme conditions as he and other famous faces take on the 100-mile trek across the Namib desert in sweltering heat.

Sport Relief: The Heat Is On, saw the celebs cycle for the first leg, parking their bikes to trek 24 miles on foot on day two.

Too hot to handle! Nick Grimshaw has had to miss out on the second day of Sport Relief’s latest celebrity challenge due to heat exhaustion [pictured with Judge Rinder]

Nick, 36, was forced to drop out of the 35 mile cycle though, on medical advice, just shy of the day’s finish line due to heat exhaustion.

Following further advice and orders from the support team on the ground, Nick has had to sit out the next part of the challenge.

Nick said: ‘I’m absolutely gutted not to be with the team today. I was mentally prepared for it but the medical team have decided I need to miss today.

‘I got pulled by the medic just 2k from the finish line and treated for heat exhaustion. I’d been drinking, eating, resting regularly but it came on so quickly. 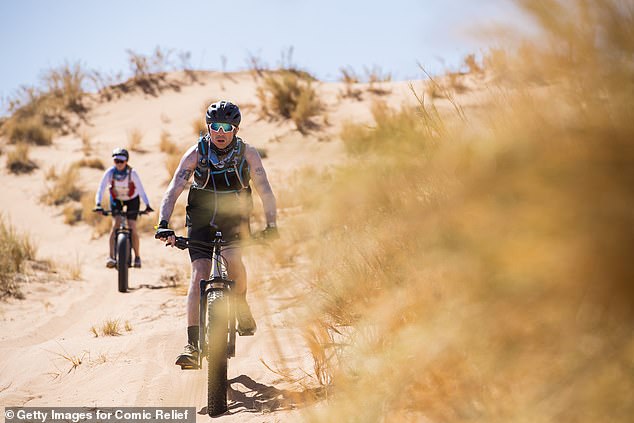 Grueling: The radio DJ has succumbed to the extreme conditions as he and other famous faces take on the 100-mile trek across the Namib desert in sweltering heat

‘I feel much better today and I’ll be fine but they have advised that my body needs to recover so I can re-join the challenge.’

The rest of the team – Frankie Bridge, Karim Zeroual, Krishnan Guru-Murthy, Louise Minchin, Rob Rinder and Samantha Womack – will be trekking on foot through the desert for more than eight hours, battling temperatures reaching 35 degrees Celsius.

The team are doing this for Sport Relief, to help break down the stigma of mental health and raise money for mental health services.

One in four people will be affected by a mental health problem in their lifetime, and each of the celebs taking part have their own experiences with the cause – hoping to help crush the stigma surrounding this issue. 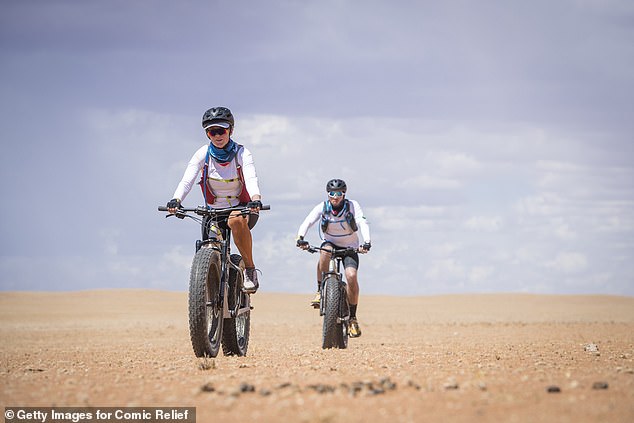 Tough terrain! Louise Minchin and Nick ride on their bikes on the first of the Sport Relief challenge, as they traverse the Namib desert in Namibia, Africa by foot, bike and ski

Before departing for the second day of the challenge – which took place on Pancake Day – BBC news presenter Louise Minchin said: ‘We did have pancakes this morning you’ll be pleased to hear! When I fell over on the sand yesterday I screamed because it burned me, that’s how hot it was.

‘I know people at home are supporting us and that’s what keeps us going. Yesterday was a really tough day. When I pushed my bike over that final sand dune and I saw Rob, who had been there for quite a while by the way, I felt such a sense of relief to have made it to the first camp.’

Frankie Bridge said: ‘Yesterday was probably one of the worst and hardest days of my life. It turns out I’m no good at cycling.

‘Everything is dead out here – we haven’t seen anything alive apart from beetles. I’ve got massive blisters on my feet and the medic had to burst them all and wrap my feet up before we set out to walk 24 miles today. 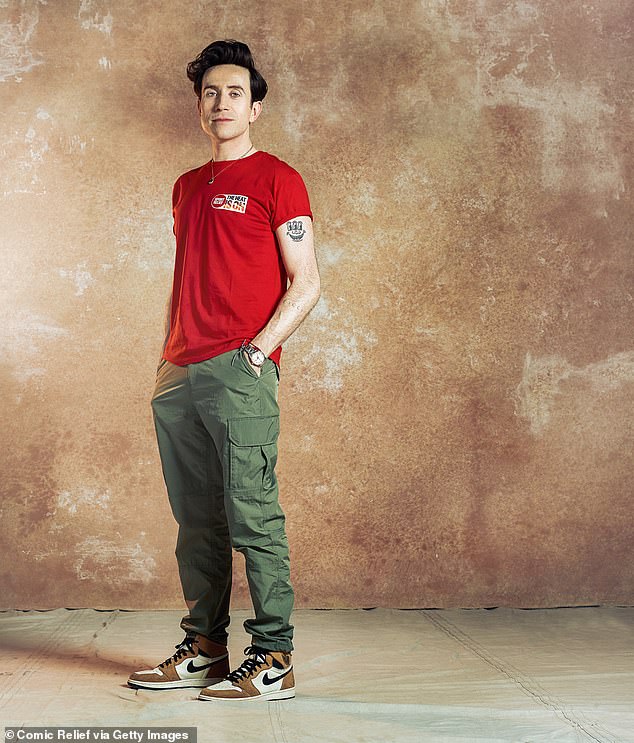 Out! Nick was pulled from the task at the end of day one, and cannot participate on day two

‘We can’t see Rob most of the time. He is on his own journey. Everyone else is suffering and Rob is just loving his life.

‘I spent hours in the desert alone yesterday and mentally it really held me back so much so I don’t want anyone to be alone. Ever!

‘Louise is my benchmark, and when she fell off her bike in the sand after 30 seconds I thought, “well I have no hope in this situation.” Sam has kept me going, we stuck together and we took it at our own pace and that’s what we learned yesterday. It’s not about being super fast, it’s about getting to the end and doing it together.’

Karim Zeroual said: ‘It was brutal yesterday. So much harder than I could have ever imagined. I may be the youngest but that doesn’t mean I’m fit. I was determined to make it over the finish line even if I crawled over on my hands and knees – which I practically did.’ 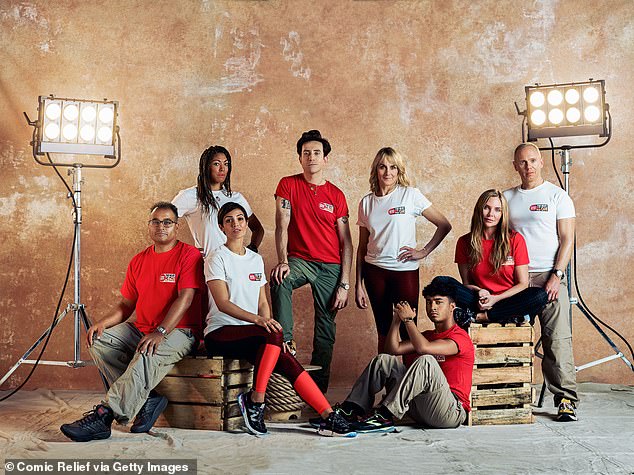 Krishnan Guru Murthy said: ‘There were times yesterday when I was genuinely scared. The heat and terrain are brutal.

‘I had the added challenge of learning a new skill. At least today is walking, which I know I can do but I’m told it’s going to be even hotter today than yesterday if that’s even possible.’

Samantha Womack said: ‘Day one was unimaginably tough. I struggled mentally and physically. I’m ready for today though. I only hope my toenail doesn’t fall off! 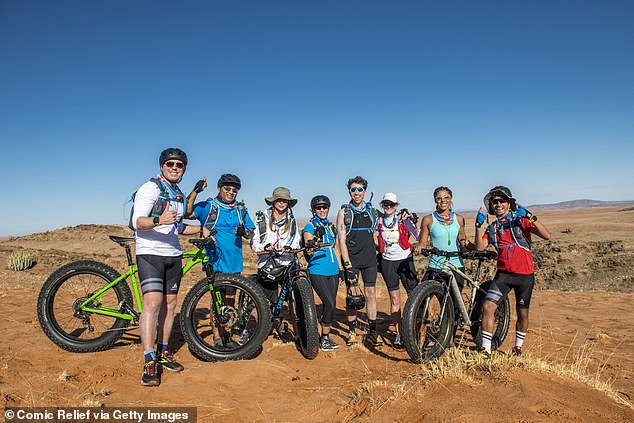 Before the storm: The celebs posed together prior to Nick being pulled from the bike trek

‘We have all had tears and tantrums, it’s so so grueling. I am feeling really emotional and about to cry to be honest. But we all feel so passionate about why we are doing this and raising funds for mental health services, we’re just thinking about that and taking it a step at a time.’

Dr Zoe Williams, who is helping provide medical support to the team, said: ‘What these guys are doing is incredibly challenging. I really hope people get behind them and support them.’

Over four days, from Monday to Thursday this week, the team will attempt to cross the Namib Desert in Namibia by foot, bike and ski (on sand) to reach the Eduard Bohlen shipwreck on the notorious Skeleton Coast. 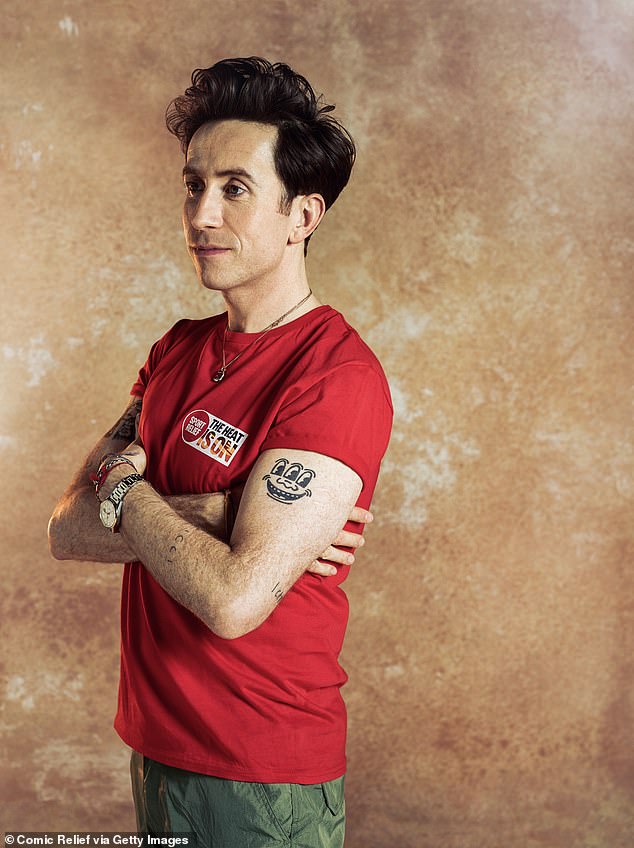 Nick said: ‘I’m absolutely gutted not to be with the team today. I was mentally prepared for it but the medical team have decided I need to miss today’

Guided by their own navigation skills, they are facing exhausting days in the blistering sun as they take on the highest sand dunes on earth and encounter deadly desert wildlife as they cross the world’s oldest desert – all in temperatures up to 35 degrees.

BBC Breakfast, The One Show and BBC Radio 5Live will all be will be tracking the team’s progress next week. Each day they will follow the group’s ups and downs as they tackle this 100-mile desert challenge of a lifetime, with footage straight from Namibia and daily catch ups as the team take on this epic adventure.

The challenge will be filmed for a special Sport Relief documentary set to air on BBC One in March.

You can donate here.