Stock markets across Europe including in London fell for the second day in a row today as fears continued over the economic impact of coronavirus.

This represented a drop of £40billion, one day after it accounted for £62billion of losses on global markets yesterday on what was its worst day since 2015.

It comes after stock prices London lost 3.3 per cent yesterday over coronavirus fears, while Frankfurt and Madrid fell by 4 per cent and Paris shed 3.9 per cent.

News that the virus is claiming lives far beyond China had sparked a rout on trading floors globally, with the Dow on Wall Street suffering its worst day in two years.

But investors are now considering whether the further cases outside China raise hopes of further monetary stimulus to limit the damage to the global economy.

Fears of a pandemic wiped nearly £1.2trillion off global equity markets yesterday, including almost £361billion off the value of Europe’s listed companies.

Panicked investors pushed gold to an all-time high in sterling terms yesterday as they scrambled to protect their savings from the coronavirus contagion.

They dropped travel firms and miners, amid fears that the outbreak would deter travel and stymie industrial activity, and rushed to the relative safety of gold.

The precious metal, which is seen as a safe haven in times of uncertainty, hit a record £1,300 per ounce before settling later in the day at £1,293.

The FTSE 100 index of Britain’s biggest listed companies accounted for £62billion of losses on global markets yesterday in what was its worst day since 2015.

Russ Mould, investment director at AJ Bell, said: ‘While stocks still have a long way to go to make up for Monday’s losses, it is encouraging to see share prices starting to move up. 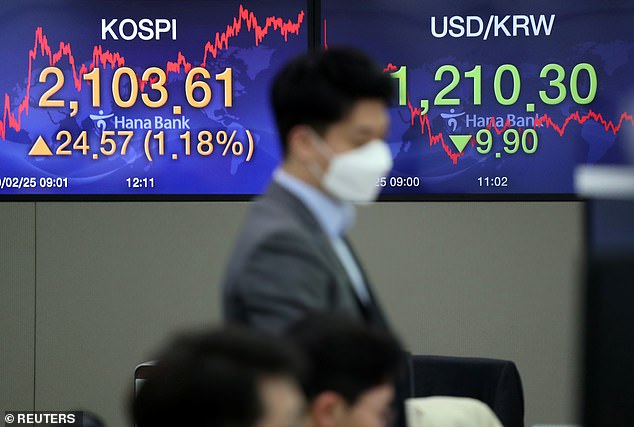 A currency dealer wears a face mask in a dealing room today at a bank in Seoul, South Korea

‘It would suggest there are plenty of investors confident enough to go shopping for bargains rather than widespread fear.’

But Michael Hewson, chief market analyst at CMC Markets, said it was likely that markets were only pausing for breath.

He said: ‘There is no question financial markets are coming round to the realisation that this particular crisis is likely to have a slightly longer shelf life than many thought was the case a couple of weeks ago.

‘There appears little prospect that financial markets look likely to settle down in the short term, which means investors will have to get used to an extended period of uncertainty and volatility.’ 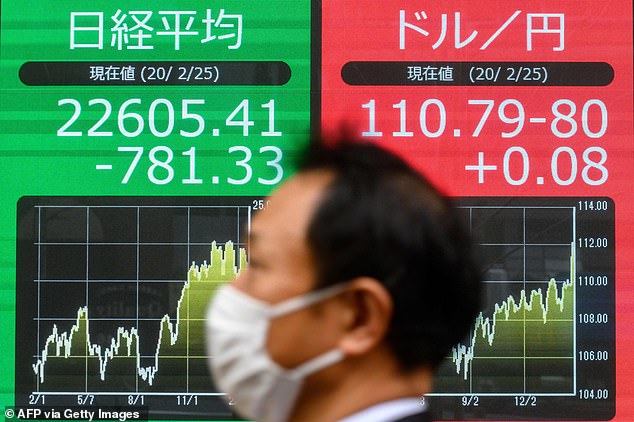 And the price of oil plummeted as traders began to worry that the economic effect of the coronavirus would be worse than originally anticipated.

But US billionaire Warren Buffet, who has been dubbed the Sage of Omaha for his investing prowess, advised investors to be cautious of selling on impulse.

He said the coronavirus was ‘scary stuff’, but added that most investors should keep a long-term outlook. 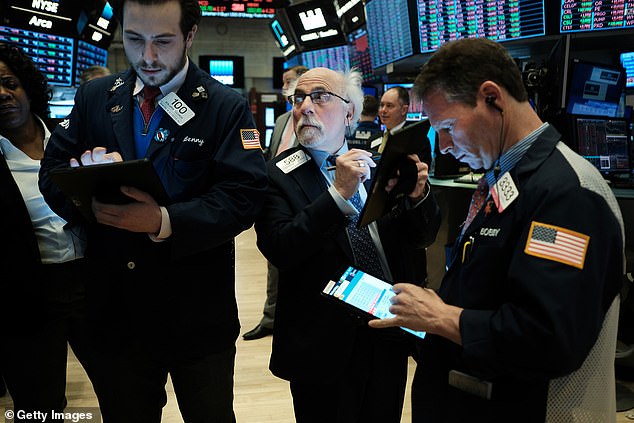 The coronavirus death toll climbed to seven in Italy yesterday and several Middle East countries were dealing with their first infections.

This has fed worries the virus could turn into a pandemic, with China’s death toll already standing at 2,705.

More than 80,000 people have been infected in China since the outbreak began, apparently in an illegal wildlife market in the central city of Wuhan late last year.

However the World Health Organization has said the epidemic in China peaked between January 23 and February 2 and has been declining since.